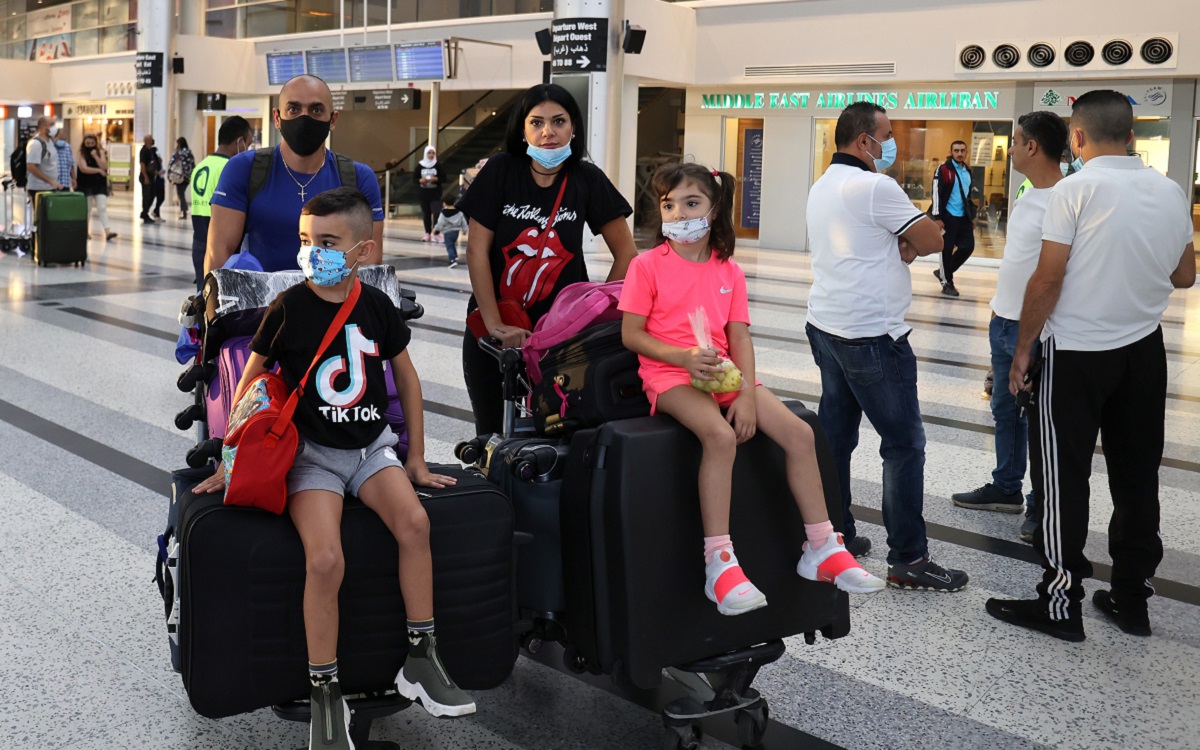 Members of the Abi Haidar family depart from Lebanon's Beirut International Airport on September 2, 2021, on their way to Cyprus. Just as during the 1975-1990 civil war that ravaged their country, hundreds of Lebanese families are turning to neighbouring Cyprus to escape the miseries of everyday life back home. Photo: Anwar Amro, AFP

Nanor Abachian, 30, emerges from the Larnaca airport on Cyprus south coast with her husband, their two children and seven heavy suitcases.

“I’ve had to leave my country and my parents to try to secure a future for my children,” she said.

Short-haul flights from Beirut to Larnaca, barely a 25-minute hop away, have been busy for months ferrying in Lebanese for whom their crisis-hit country with its dire shortages has become unliveable.

They leave behind a bankrupt country where daily 22-hour power cuts have become the norm and shortages have hit daily necessities, from fuel and gas to medicine and bread.

The exodus reminds many of the 1975-1990 civil war that ravaged Lebanon.

Since the start of the financial crisis in 2019, several thousand Lebanese have emigrated, many of them to Cyprus. There is no official data on numbers, especially as many Lebanese hold second passports.

Lebanon’s ambassador to Cyprus, Claude el-Hajal, said the number of families resettled on the island has seen “a significant increase” especially since the devastating August 4, 2020 explosion in Beirut’s port that killed over 200 people.

In the 1980s, at the height of the civil war, about 100,000 Lebanese families fled to Cyprus, Hajal said. However, many returned after the conflict.

During the 2006 war between Israel and the Lebanese Shiite group Hezbollah, Cyprus served as a base for the evacuation of almost 60,000 civilians from Lebanon.

No hope for a future

Abachian said a “feeling of insecurity” was the main motivation for their flight abroad.

“We are living in the unknown… My children have no future in Lebanon,” she said.

Once in Larnaca, she settled with her family at a friend’s house, waiting to rent an apartment near the school where the children have been enrolled.

George Obeid, in his forties, also opted for Cyprus for the sake of his children’s schooling.

“There is no hope for the school year in Lebanon,” he said, citing the power cuts and fuel shortages that are crippling school services and activities.

“We were also worried about our safety,” he added, fearing a rise in crime due to widespread poverty and desperation.

According to the United Nations, 78 percent of Lebanese now live below the poverty line, up from less than 30 percent before 2019.

In Nicosia, the Franco-Cypriot school, which has a curriculum similar to that of several French-language schools in Lebanon, has been flooded with an estimated 250 applications from newly-arrived Lebanese.

According to Constantinos Karageorgis, a senior trade and industry ministry official, a fast-track procedure introduced last October for establishing foreign companies on the island has led to seven Lebanese firms relocating with nearly 200 employees, accompanied by their families.

With this new mechanism, “the procedure now takes 10 to 15 days instead of two to three months”, said Hajal, the ambassador.

Another attractive sector for Lebanese with the means is real estate.

Lebanese businessman Georges Chahwan, owner of dozens of real estate projects in Cyprus, said he has sold “nearly 400 apartments to Lebanese between 2016 and 2021… including a hundred in the past six months”.

The holiday island, which is a member of the European Union, offers permanent residency for a certain level of investment in real estate, he explained.

Meanwhile, Cypriot banks offer loans to Lebanese whose salaries are paid in US dollars.

“Ever since 1975, Cyprus has been a haven for the Lebanese,” Chahwan said. “The island is a stone’s throw from Lebanon, it’s stable and safe… They consider it their second home.”