Hezbollah may be working hard to pin the October 14 clashes solely on the Lebanese Forces, but the Party of God may have lost more than it’s ready to admit – the legend of its glory. 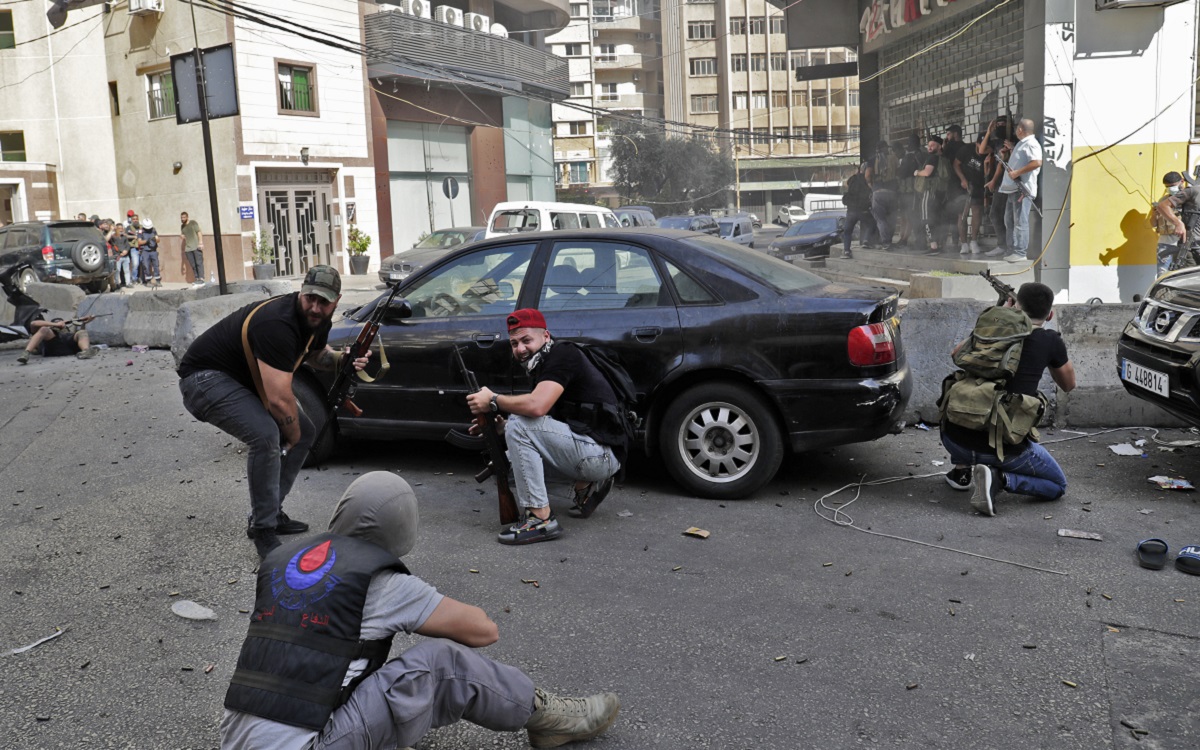 Fighters from Shiite Hezbollah and Amal movements take aim during clashes in the area of Tayouneh, in the southern suburb of the capital Beirut, on October 14, 2021. Photo: Anwar Amro, AFP.

Imagine Thursday’s events the other way around: hundreds of boys bussed by Lebanese political party X (regardless of sect) to Dahiyeh to ask for an official’s dismissal.

An obviously organized event, burning Iranian flags and pictures of the Iranian ambassador. Or maybe just putting up a banner with “End the Iranian occupation”.  They don’t even have to start throwing rocks and smashing shop windows.

The problem with that scenario is that everyone knows it would be a suicide mission. It’s already a generalized idea that stepping into Hezbollah territory even with a camera may get you in trouble.

For many years, that may have been Hezbollah’s victory over Lebanon. A sort of negative soft power: the fear that if anyone moves, Hezbollah would crush them.

In fact, they were surprised and enraged by the fact that someone, it doesn’t even matter who, actually fought back.

There was nothing glorious or dignified in Thursday’s clashes. It was sheer testosterone, flexing muscles and weapons. Beirut’s streets were filled with thugs, not soldiers.

Hezbollah and Amal supporters did not take to the streets out of the conviction that the Beirut blast investigation was politicized. They wouldn’t have mobilized by themselves in defense of MPs Ali Hassan Khalil and Ghazi Zeaiter. It was a political decision of the polit-bureaus to bring people to an organized rally.

The supporters weren’t exactly coerced either. Hezbollah and Amal, like all Lebanese sectarian factions, control social networks and build on the excitement of young men to be part of a cohesive group doing things together. Nothing works better than the impression that you’re in a brotherhood, that you’re “one of us” fighting against “them”.

Hezbollah may be an Iran-backed Shiite Islamist organization, but it is also a faction that had to build on the Lebanese political fabric in order to survive, become part of the system, and eventually dominate it.

It has negotiated its political space in Lebanon by using its weapons and strengthened it by building on the social fabric of its community. It created a culture of “warrior brotherhood” and planted the dream of the warrior in teenagers’ minds. It was a centralized strategy, the result of a long-term education policy to shape generations of followers. Every authoritarian regime’s dream.

Armed and loose on the streets

Only 19 people were arrested so far in relation to the clashes on October 14, although there were hundreds of young men marching on the streets of Beirut carrying heavy weapons.

Hundreds of gunmen marched through the streets of Beirut brandishing their RPG launchers and their ammunition vests, feeling cool and empowered.

They filmed themselves, they had fun shooting at walls, friends calmly having a smoke and watching the show. It was like a real-life video-game, wasn’t it?

Yes, whoever shot at the protesters, even if the protesters were violent and threw the rocks first, should be arrested and charged with murder. It is murder, even if the guy killed was carrying an RPG with confidence and was ready to fire. No one is arguing with that. Innocent people died. The snipers were not defending the Beirut blast probe, they were defending their fief.

The problem is that Hezbollah’s people do not go to jail regardless of what they do.

The Lebanese Forces lost some credibility after Thursday’s clashes, no doubt. But it will take much less for LF to recover politically after the clashes, than it will take Hezbollah to rebuild the myth of the Resistance.

Samir Geagea did not resist investigations and law enforcement and he answered questions. Nor did the arrested snipers in Ain el-Remmaneh fight the army when they came in to arrest them.

Hundreds of its fighters fired at inhabited buildings with heavy weapons, chanting sectarian slogans, destroyed within a few hours all the efforts the Party of God’s polit-bureau had put in for years.

The problem is that Hezbollah’s people do not go to jail regardless of what they do. The clashes in Khaldeh in July between Hezbollah and Sunni Arab tribesmen happened because one man decided to take matters into his own hands and kill the Hezbollah member who had killed his brother two years before. Nothing had happened to the killer in all that time because he was “protected”. This was not a politically motivated murder, no one politicized it, the US embassy did not interfere. It was a petty murder. Yet, no one arrested the Hezbollah member and, two years later, it led to armed clashes. That’s what impunity does.

Hezbollah’s weapons were always more effective as a threat than as actual tools in battle.

They were quite successful as a threat, both domestically and regionally. That threat allowed it to negotiate its political role and become part of the government.

After Thursday’s clashes, when its militia was marching on the streets like it was its national day, Hezbollah has lost that mythical Resistance aura it worked so much on for so many years.

That constant threat helped Hezbollah turn into a regional force. No one in the world talks about Lebanon’s fate without talking about Hezbollah.

But when Hezbollah sent gunmen on the streets of the Lebanese capital, in May 2008, to fight other Lebanese, back then it was the Future Movement supporters, the party’s propaganda machine had to work for years at reshaping public opinion, recalibrating public image and re-building the myth of Resistance that defends the country.

After Thursday’s clashes, when its militia was marching on the streets like it was its national day, Hezbollah has lost that mythical Resistance aura it worked so much on for so many years.

The war in Syria was hard to justify, but war inside Lebanon against other Lebanese, hurting other Lebanese, is not justifiable. That is why the only defense the group has is to point at the Lebanese Forces and say “they shot first” instead of sharing the responsibility.

The spokesman of the August 4 explosion victim’s families, Ibrahim Hoteit, released a video in the middle of the night on Friday, asking judge Tarek Bitar to resign. It came hours after he declared his devoted support for the investigator in the aftermath of the clashes. On Saturday he told AFP that he resigned from his post and that he was never intimidated.

But letting go of accountability leads to more murder.

Most families of the victims of the Beirut blast want to go on fighting for justice. Because they know it’s the first step forward and if they back off, it’s doom. After Thursday’s clashes more than ever.