Southern Syria has seen a serious uptick in violence in the last month, but analysts say this is business as usual, as Iran and the government seek to gain the upper hand in the area. 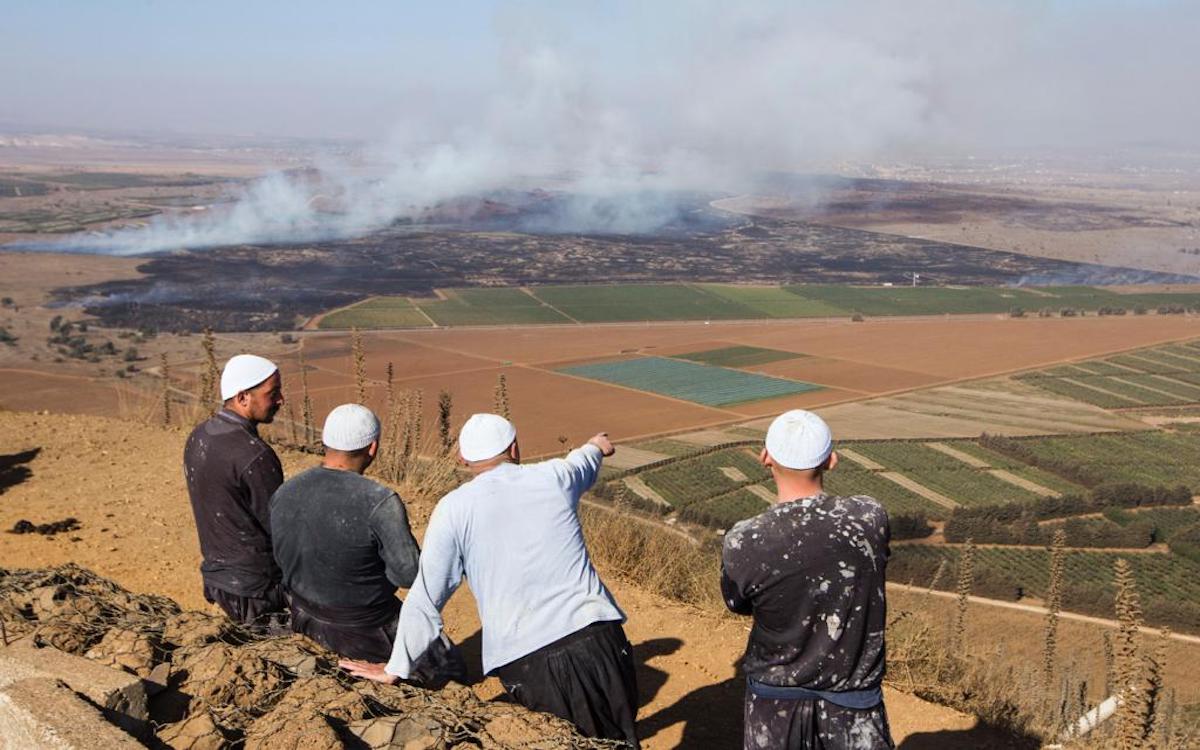 Druze men stand in the Israeli-annexed Golan Heights as they look at smoke rising in the distance caused by fighting between forces loyal to Syrian President Bashar Assad and rebels over the control of the Quneitra border crossing, on August 27, 2014. Syrian rebels, including Al-Qaeda's affiliate Al-Nusra Front, seized control of the Syrian crossing with the Israeli-occupied Golan Heights today, the Britain-based Syrian Observatory for Human Rights said. Photo: Jack Guez, AFP

The situation in southern Syria has boiled over yet again as government forces attempted to storm the city of Tafas in the western Daraa countryside, and Druze militias continue to hunt down associates of Raji Falhout’s Fajr Forces in Suwayda.

The Syrian south is a highly volatile region, with an active insurgency being waged in Daraa and Quneitra, while tensions between Suwayda’s Druze community and the government simmer.

NOW released a report on the south on July 27 that can provide more background information to recent events.

The situation is still very fluid, and, as always, what is to come is unclear.

Analysts indicate that though it seems like heavy fighting could break out at any moment, none of the factions involved are interested in a resumption of direct hostilities.

The situation in Daraa

Since NOW’s last report, the government’s shelling of Tafas ended with a preliminary agreement.

The agreement stipulated that individuals wanted by the government would surrender and the army would search certain neighborhoods in exchange for withdrawing from the town’s perimeter.

Tensions were still high, however, which led Russian officers to help mediate negotiations between government forces and the opposition.

Russia often intervenes in conflicts in Daraa, usually via mediation. They sometimes even intervene in personal disputes between government soldiers and civilians, and at one point were seen as a more “neutral” actor in the area.

Nevertheless, negotiations continued to stall, as military officers claimed that wanted individuals were still in Tafas, while the town’s representatives called for the military to withdraw from the area.

The situation escalated again, with clashes breaking out between opposition fighters and government forces primarily in the agricultural areas south of the town.

I believe the regime fears a power competition with those wanted people [and it is] trying to get rid of them in all the possible ways.

The government then closed the roads into Tafas and attempted to storm it.

Fighting was also seen in the southern areas of the town, as government forces shelled the area with tanks and mortars, leading to people in those neighborhoods being displaced from their homes.

In addition, the government managed to hunt down two Islamic State (IS) members still present in the area.

IS-held territory in the Yarmouk basin, which straddles both the Israeli-occupied Golan Heights and the Jordanian border, but the area was lost to government forces in the 2018 Southern Syria Offensive that put all of Daraa and Quneitra under government control.

This would not be surprising.

Iran and Hezbollah are both active in southern Syria, as the area is highly strategic given that it borders the Golan Heights and Jordan.

The region is also part of the narcotics highway that links Jordan to Syria and Lebanon, where Captagon production has sharply increased in recent years.

Indeed the enforced instability in southern Syria is a means to maintain this narcotics highway while allowing the government to muddy the waters and deny its involvement.

Most recently, Ahrar Horan announced that the agreement between the opposition in Tafas and the government was to be implemented, likely ending this round of fighting.

However, it is still possible that clashes could again break out, as has happened in the past.

Qalaat Al Mudiq, an analyst who focuses on Syria and tracks Captagon seizures and military developments on Twitter, told NOW that the status quo, though violent, will likely persist.

“[This will be a] temporary deal in my opinion, until the next time. The regime had time and men to fully storm [Tafas] and they didn’t. [It] clearly is not interested in heavier fighting, or possibly urban warfare,” Al Mudiq explained.

Though the war in Syria has become less deadly in recent years, the government is still very sensitive to casualties within its ranks. The army is not as weak as it once was in the early years of the war, but it still cannot afford to lose large numbers of men in urban battles.

When asked if the reason for the attack on Tafas was related to an uptick in assassinations and violence against government forces in the area, Al Mudiq said this was not the case.

“Assassinations in Daraa are stable, not even the area of tafas with the highest rate. It’s always the same, the regime wants 6-7 people it has on its list. They claim they are responsible for assassinations, which is probably wrong, but the regime can’t enter Tafas like that, those people are former rebel commanders and still have local groups with them,” he explained.

He indicated that the government still wants to neutralize opposition figures, at least at a slow pace, as it does not want to have to vie for influence.

“I believe the regime fears a power competition with those wanted people [and it is] trying to get rid of them in all the possible ways,” he concluded.

After the Men of Dignity, a prominent Druze militia and political movement that was established by Wahid Balous in the early years of the war, as well as other groups, attacked Raji Falhout and his so-called Fajr Forces, six dead bodies were left at al-Mashnaqah roundabout in Suwayda city.

It is unclear who killed the men — they had been captured by the Men of Dignity but allegedly handed over to others — as they all appear to have been executed.

Contrary to prior information, Raji Falhout was not captured by the Men of Dignity and seems to have gone underground.

Now, the Men of Dignity and other Druze factions have been pursuing Falhout’s associates, and, last week, they went after Salim Hamid’s Fahd Forces, which operate out of Qanawat.

Regarding the silence, this is a strategy… [It] means two things. First thing is for people in Suwayda and Syria generally, [the regime] is not part of this fight, it’s an internal fight between two groups in the society. The other message… is for surrounding countries, particularly Jordan, that these Captagon factories are in [the regime’s] control.

Hamid surrendered himself to a local Druze group on August 16.

Moudar Al Debis, a Syrian researcher and politician, told NOW that he thought that it was the government that killed those six men, but it is also possible that another Druze militia, the Counter Terrorism Forces, could have done it as well.

“Those people [Falhout’s gang] have a close relationship with the military security of the regime, so most probably know that they have been killed by the regime itself. Another option is… [the Counter Terrorism Forces].”

He also indicated that in the past, it has been Iran and the Syrian government that have dumped bodies at the al-Mashnaqah roundabout.

Al Debis pointed out that the problems in Daraa and Suwayda are different, and this is by design.

He then explained that the regime’s tactic is to divide the people in Suwayda by pitting them against gangs, such as Falhout’s Fajr Forces.

“Rijal al Karama [the Men of Dignity]… they always feel that Iran’s existence and all the militant groups related to Iran or getting supported by Iran or performing Iran’s agenda. They perceive them as a real threat.”

Al Debis also indicated that the Men of Dignity’s anti-Iran posture is largely supported by the public, who are growing tired of the instability brought on by the drug trade and lack of functioning state institutions.

Al Debis also commented on the government’s silence regarding Falhout and the violence in Suwayda in the last month.

“Regarding the silence, this is a strategy… [It] means two things. First thing is for people in Suwayda and Syria generally, [the regime] is not part of this fight, it’s an internal fight between two groups in the society. The other message… is for surrounding countries, particularly Jordan, that these Captagon factories are in [the regime’s] control,” Al Debis told NOW.

Overall, the government wants to portray the fighting as unconnected to its own policies and that it is just the result of local squabbles that it does not need to comment on.

Regarding Captagon, the regime simultaneously does not want to be associated with the trade but also wants to use the trade as leverage with regional countries, such as Jordan, that supported the rebels.

The reality in southern Syria is that instability will persist, as it is both in the interest of the regime and Iran to keep the south volatile.

With things cooling down in Daraa and the Men of Dignity and other groups continuing to pursue gangs associated with the regime’s intelligence apparatus, the status quo will likely continue.

Though it may cost them a few soldiers, overall the government is not very present in the area, instead using local groups to pursue its interests.

It is important to note that the Captagon lab that the Men of Dignity discovered in the Fajr Force’s HQ is a crucial piece of evidence tying Iran to the drug trade.

Falhout was directly supported by both the regime’s intelligence apparatus and Iran, and there had already been reports that Iran and Hezbollah had helped the Fajr Forces establish Captagon production in Suwayda.

Unfortunately, evidence such as this has not prevented Syria from rejoining Interpol.

The regime has made some Captagon busts in Damascus and the south, but this all seems like an attempt to improve Syria’s image with the international community.

Either way, the Captagon trade will likely be maintained and southern Syria will continue to be a hotspot for Captagon production and smuggling.

Though things have cooled down in Daraa for now, it is only a matter of time before fighting breaks out yet again.