A group of lawyers have been representing Lebanese anti-government protesters pro bono since 2015 and have been pushing for reform of the justice system by exposing abusive practices. 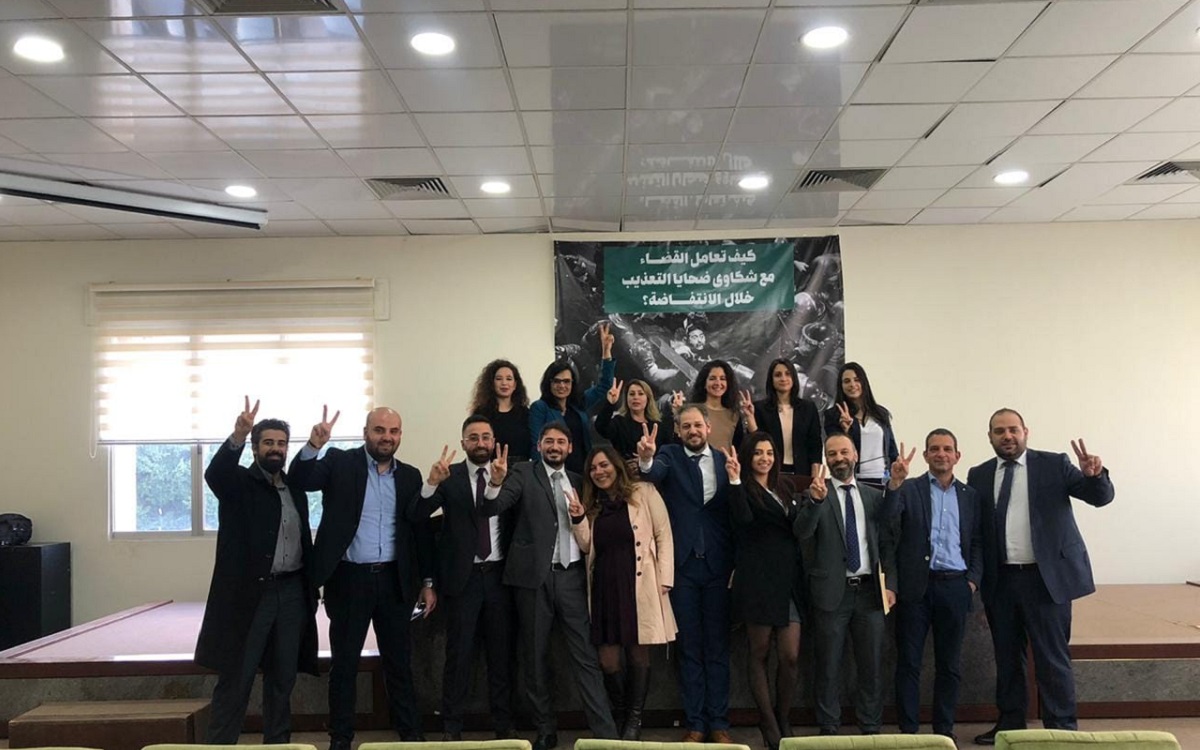 Members of the Lawyers' Committee to Defend Protesters after a meeting in February 2021. Photo: Courtesy of the Committee members.

On Sunday, August 15, scores of people were burned to death in the village of Tleil, in the Lebanese northern region of Akkar, after an illegal fuel depot the Lebanese Army had confiscated blew up as villagers gathered in the middle of the night to get fuel amidst a deepening crisis.

Hours later, as the country was still mourning the dead, protesters gathered in front of Akkar MP Tarek Merhabi’s home, and broke in chanting anti-corruption slogans and filming the entire scene. The MP is known to be a business associate of the owner of the fuel depot.

A group of protesters, including some relatives of the August 4, 2020 Beirut port blast victims, then gathered at the Beirut residence of Prime Minister Najib Mikati and clashed with security forces.

It was not the first time protesters attempted to storm politicians’ residences to raise awareness against impunity and corruption. It happened on July 13, when protesters demanding the end of parliamentary immunity for high-ranking security officials and several former dignitaries implicated in the Beirut blast stormed Interior Minister Mohammad Fahmi’s residence.

But on August 5, William Noun, brother of the port blast victim firefighter Joe Noun, was arrested in front of Mikati’s house.

The footage of his arrest made headlines and circulated across Lebanese social media. Activists were outraged and he was let go the same night, after Mikati himself called for his release.

But it was just the beginning.

Ayman Raad, 42, was on his way back to Beirut from a weekend in the Bekaa when the news about the arrest started coming in.

The lawyer, member of a committee counting scores of Lebanese professionals offering legal counsel pro bono for detained anti-government protesters and families of Beirut blast victims, headed to the demonstration in front of PM-designate Mikati’s residence knowing he would have to assist protesters arrested by security forces.

Law was never Raad’s dream, he says. He wanted to be a vet. But his family pushed him towards a career that promised to allow him a comfortable life, so he studied law at the Lebanese University. He says he actually tried to be a corporate lawyer until October 2019, when he drove past one of the first protests against the government after the financial crash and he decided to pull over and join the crowd.

One thing led to another, and when protesters started to be detained by security forces and over-indicted with crimes they had never committed, he called a few friends and asked if they needed help representing the detained. He became part of the committee dedicated to the legal care of detained protestors.

Ghida Frangieh, a lawyer with the Legal Agenda, a Beirut-based nonprofit research and advocacy organization, is one of the founders of the lawyer’s committee. Frangieh had studied law in France and the UK, and had joined the Tripoli Bar Association in 2011.

But in 2015, during the “you stink” protests, when Beirutis demonstrated against a trash crisis triggered by the government’s lack of transparency and negligence in waste management, things got rough on the streets. So Frangieh decided to offer pro bono counsel to demonstrators arrested and prosecuted. That is when the committee was formed. At one point they’ve reached 60 members, but right now 10 people are still active.

“The hardest question was when the detainees would ask us when we visited them in custody if the beating was going to stop.”
Ghida Frangieh, Lawyer, Legal Agenda

The first cases they took were the hardest as the police weren’t willing to comply easily and the thought of lawyers who defended protestors did not intimidate them.

Starting October 2019 and the protests that followed, the lawyers in the committee became busier and busier.

Frangieh mentioned that their toughest cases so far were the kidnappings of protesters by military intelligence. People would simply disappear during protests and emerge battered and bruised after several days in custody.

She says that the level of violence she witnessed when people protested against COVID-19 lockdowns in April 2020 proved to her that detainees were not safe while in custody.

“The hardest question was when the detainees would ask us when we visited them in custody if the beating was going to stop,” she pointed out.

She also says she spent days waiting at various prosecutors’ doors to be given an answer about where a protester was detained. She says she couldn’t give up. If she left, no one would get any answers.

Following Merhabi’s complaints after the August 15 protest and break-in, the police summoned eleven people for questioning and ended up with 13 arrested.

A group of protestors gathered in front of the police barracks and, again, their calls for the release of their fellow demonstrators were broadcast on social media channels and rebroadcast on mainstream media, causing more uproar and putting more pressure on the authorities. Eventually, Merhabi withdrew his complaint.

As a lawyer, Raad sees these arrests as a tactic used to pressure protestors into toning down their demonstrations against politicians. But the move, Raad says, backfired.

“We had protestors who turned themselves in because they did not hear or they missed the call that evening. So you see, protestors are not scared anymore. They did not even hide their faces in the circulated videos of the break-in, this showed that the people did not care about stealing valuables, they were just angry.”

Guitta Mcheik, 25, journalist and political activist, was also one of the arrested people during the August 15 protest. It wasn’t even the first time she was detained. She had been summoned previously for ambushing a restaurant in which a former minister investigated for his knowledge of the ammonium nitrate that caused the Beirut Blast was dining. She was sued for defamation but the charges were dropped. She says the interrogations did not faze her anymore.

“Basically we have security agencies that are investigating a food company in India [Zomato] but we can’t know who brought the nitrates into the Beirut Port.”
Mazen Hotteit, Lawyer

“What gave me lots of confidence was that during the interrogation you could hear the voices of protestors outside yelling for our release,” she said.

Mcheik said that the presence of the lawyers of the committee among the protesters outside the security forces barracks was one of the sources of their strength and legal knowledge.

“I can’t even think of how hard it is to hire a lawyer on your own. They support our moves and they give us hope and courage to keep going,” she added.

By the time the interrogations ended, it was clear there was no grand theft at the MPs home. However, committee lawyer Mazen Hotteit said, one credit card was used to buy dinner through the food delivery app “Zomato”. The investigation would continue to find out who submitted the order, to the lawyers’ uproar.

“Basically we have security agencies that are investigating a food company in India [Zomato] but we can’t know who brought the nitrates into the Beirut Port,” Hotteit told NOW.

The committee work has been taking up all of Raad’s time, and he says he never felt more accomplished.

After he joined in 2019, the committee became involved in more than 2000 cases of people detained after anti-government protests in Lebanon. Usually, Raad says, several lawyers work on one case and divide tasks from research to following up with the cases at police stations. Raad says that the number of participants has diminished in the past year due to a lower volume of arrests.

“The first cases were harder because the security forces were harsher. They didn’t fear us nor did they respect us,” he pointed out.

One way to intimidate protesters was to call them in for investigation in the military court system, which should be reserved for military and security forces personnel. In military detention and interrogation, protesters can be kept a full day with no water or food and then released for lack of evidence, Frangieh explained. Fear tactics were also used to create an apocalypse narrative among protesters, she said.

The prosecution continued to use what Raad called “shock and awe” tactics even in 2021: they over-indicted protesters to frighten people and prevent them from taking to the streets again.

One example, he says, was the January 2021 violent demonstrations in Tripoli against the COVID-19 lockdowns, lack of local development projects and high unemployment. Most of the demonstrators arrested were charged with terrorism for throwing Molotov cocktails at the Serail in the city, and also at the security forces.

Raad says that regardless of the fact that the indictments were exaggerated and no real evidence for the security crime was presented, Tripoli’s streets have been empty of protesters since.

The lawyers are not exempt from risking safety and jobs for their work as counsel for demonstrators. One of the committee lawyers took to social media to criticize a Military Court official by calling him corrupt and was called in for investigation the next day.

“I am representing him because we are friends and he needs a lawyer,” Raad said. “What’s interesting is that the screenshot of the post was taken 23 minutes after he posted it. We, the key people, are always under their radar,” he stated.

The biggest problem the lawyers said they faced was that the public prosecution offices were affiliated with various ruling political parties. For them, it was a battle to get public institutions to serve the public interest, they said.

“Any plan to rebuild the State needs to start with liberating the judicial system and the public prosecution offices from direct political influences,” Frangieh stated.

She says that The Legal Agenda, the NGO she works with, gathered experts and worked for 5 years on drafting a bill for the reform of the judiciary by learning from the experiences of various countries. They submitted the bill to the Parliament in 2018, but the legislators in Lebanon did not consider justice reforms as a priority. Frangieh said she was also concerned about the changes that may be made to the draft in the Parliament.

But in her opinion, the biggest change, one that would trigger all other changes in Lebanon, has already been achieved.

“When you see people demanding for politicians’ immunities to be lifted for example, you know we became a society that wants to defend itself and that’s a sign of change,” the lawyer explained.