Despite setbacks due to the country’s deepening crises, Lebanon’s once-thriving cultural life persists. 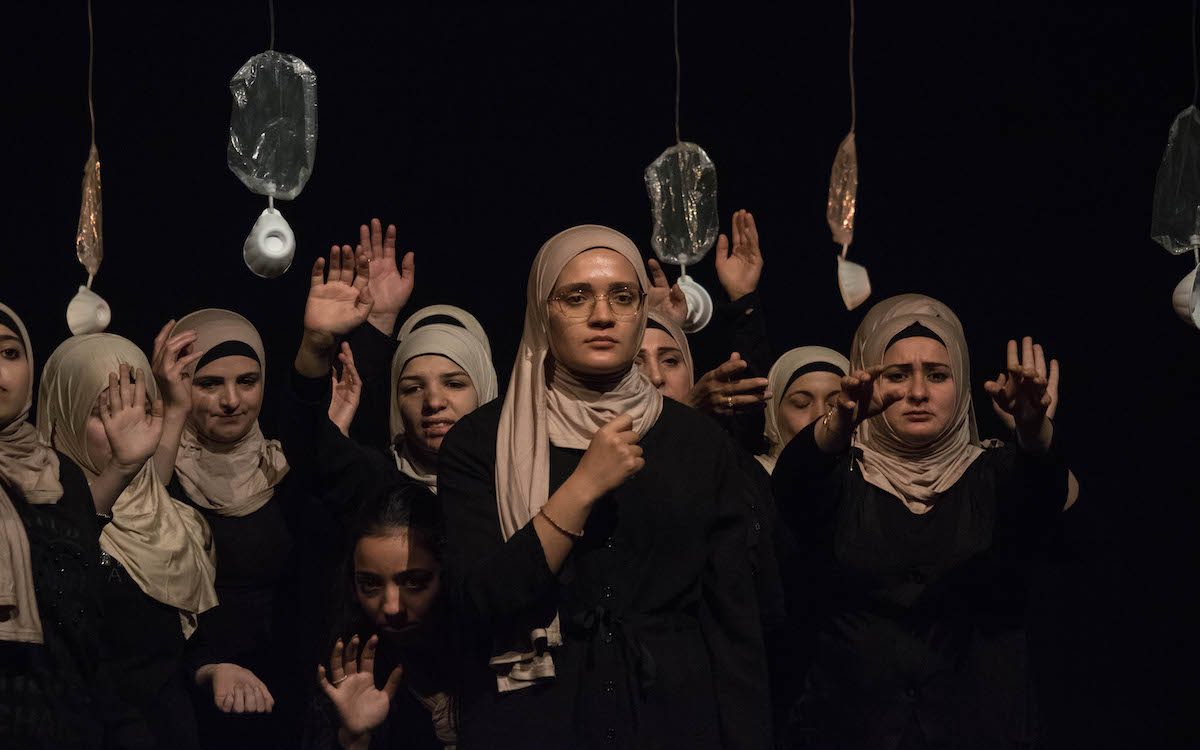 The NGO Seenaryo performs its original production titled In the Middle in Beirut on October 29, 2020. Photo: Nicholas Frakes, NOW

Fawziya Jaffan, activist and photographer, has always dreamed of performing on stage. In 2021, she and her friends formed the rock band “Hyped After Dark,” which translated the ongoing Lebanon crisis into music.

According to Jaffan, the crisis inspired the band to cope and relate to their audience through music. Although there were financial and personal challenges along the way, she says “it was worth it in the end.”

Beirut’s cultural vitality has slowly revived, despite the country’s currency losing more than 95% of its value and depositors being locked out of their dollar deposits.

The band is accustomed to performing “Quadrangle”, a favorite spot for musical performances in Baabda, just outside of Beirut. A series of lockdowns and several financial blows forced pubs, clubs, art galleries and museums to close, putting cultural life on hold or transferring it online.

While there have been a few setbacks, Jaffan says that cultural life has re-established itself in full force.

“The central Beirut neighborhoods of Hamra, Mar Mikhael, and Gemmayze were the cultural centers of the capital prior to the 2019 collapse, and I believe they have succeeded in revitalizing their cultural flair,” Jaffan said.

Having experienced social discrimination in the past, the singer, a Hijabi and a devout Muslim, says that the performances offered her a safe space to express herself and feel the community’s support.

“I never felt out of place in these places because I wore a Hijab. Beirut is a safe place for people to express themselves in their own unique ways,” she said.

A number of entertainment venues, including Metro Al Madina and Sunflower Theater, have been bustling with life and events throughout the year. Dance, music, plays and stand-up comedies have taken over the capital’s small venues.

We expected the cultural life to be back but not to this extent. It was a positive surprise to see It was interesting to see that people remained passionate about theater despite the financial crisis.

The cultural and entertainment life in Lebanon did not stop during the pandemic, according to Bernadette Houdeib, Founding member of Cultural Cooperative Association for Youth Theater and Cinema (SHAMS), Instead of on stage, plays and events would be held through zoom calls.

“It was possible for us to find a glimmer of hope among the chaos, and we continue to do so,” she told NOW. Rather than shutting down, the cultural life shifted online.”

Houdeib goes on to say that the Sunflower Theater has presented six plays since October. This number, along with the large audience, was a surprise.

“We expected the cultural life to be back but not to this extent. It was a positive surprise to see It was interesting to see that people remained passionate about theater despite the financial crisis,” Houdeib noted.

Even though theater tickets can range from $6 to $20, people were saving up to be able to attend the theater.

“Another key distinction this year is the increase in stand-up comedy shows that bring unfiltered opinions that are in line with October 17’s values of freedom of expression,” Houdeib explained.

The importance of culture

“People come together during times of crisis to help one another,” Chami told NOW. It has been reported that theater owners and performers are compromising by making deals with each other; some would offer students a discounted ticket or a special price.

According to Chami, recent artistic performances have been fuelled by anger sparked during the October 17 revolution, which broke several taboos regarding politics, religion, and sexuality.

Young people cannot be silenced, so they will find any way to express themselves, even if they are on a tight budget.

Meanwhile, the expert says that due to the current economic crisis, artists are generally on a budget, but they have been pushing the envelope and getting creative, sometimes using home appliances in their performances.

“Young people cannot be silenced, so they will find any way to express themselves, even if they are on a tight budget,” Chami said.

In spite of the fact that many private investors have pulled out of the market, the expert says that NGOs and embassies still providing funding and grants, which is keeping the artists motivated.

Moreover, artistic diversity has decreased in recent years and new types of creative works have emerged as a result of the crisis.

Chami, however, believes that artists and the younger generations can keep the country’s renowned cultural life alive in spite of hardships, as illustrated by several Lebanese artists who traveled abroad to perform, make a name for themselves, endure financial hardships, and return to Lebanon to display their talents.

Despite the lack of funds and a mass migration of art students and performers, Lebanon’s cultural and artistic life continues to prove that its creators are willing to adapt to the circumstances and eager to put their country back on the map as an artistic hub.