Lebanon heading to the polls

Lebanese citizens are heading to the polls on Sunday to cast their ballots in the first parliamentary elections after the October 17, 2019 anti-establishment uprising. Follow our live updates and our journalists on the ground throughout the day. 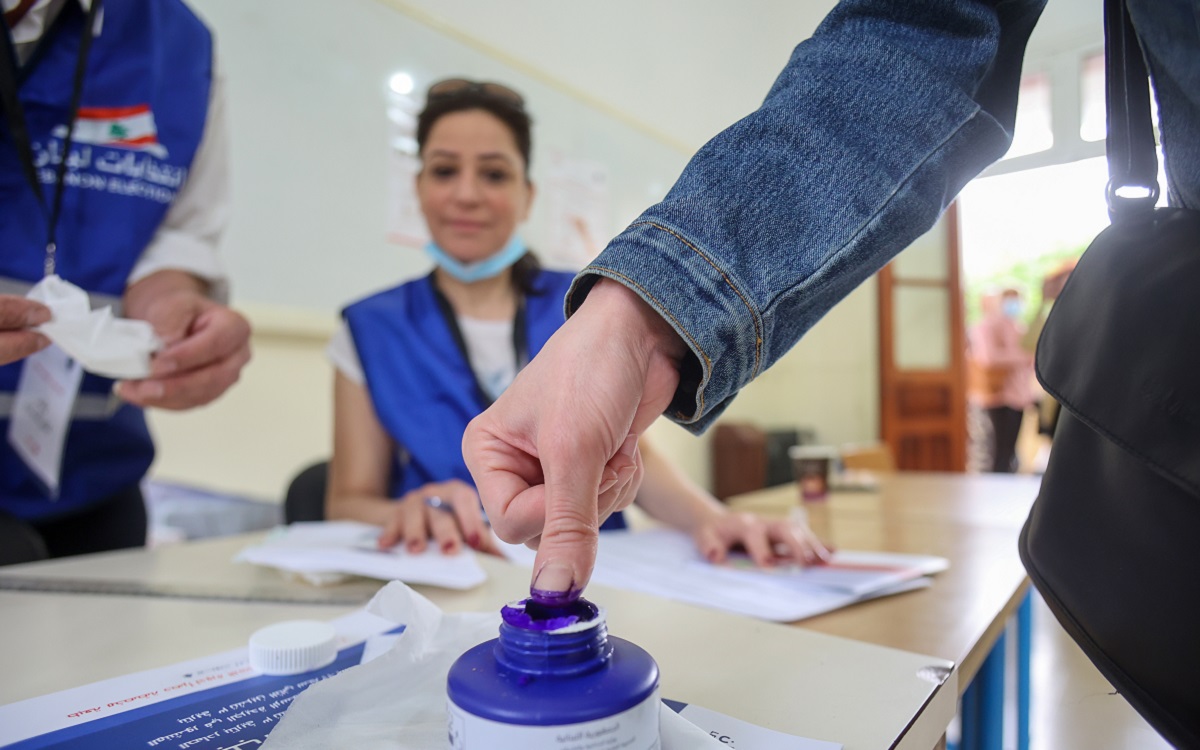 A voter dips her finger in ink after casting her ballot in the parliamentary election at a polling station in the capital Beirut, on May 15, 2022. Photo: Anwar Amro, AFP.

Lebanese voters are heading to the polls in all regions of Lebanon to cast their ballots in the first general election after the country’s financial system collapsed in 2019, triggering the most severe economic crisis in the world in 150 years.

Amid tensions of conflict escalation amid traditional sectarian political factions and new, secular movements, some born out of the October 17, 2019 mass protest movement against the corrupt political establishment, the May 15 poll is set to bring some new faces to the Lebanese Parliament.

Some analysts say the poll won’t yield a seismic shift, although the discontent with a graft-tainted political class blamed for a painful economic crisis and the Beirut port blast is widespread.

Given Lebanon’s sectarian-based politics and it’s electoral, it will likely “reproduce the political class and give it internal and international legitimacy”, Rima Majed of the American University of Beirut told AFP.

“Maybe candidates from the opposition will clinch some seats, but I don’t think that there will be a change in the political scene,” said Majed, an expert in sectarianism and social movements.

Lebanon’s political system has long distributed power among its religious communities, entrenching a ruling elite that has treated politics as a family business.

By convention, the Lebanese president is a Maronite Christian, the prime minister a Sunni Muslim, and the speaker of parliament a Shiite.

In the current parliament, the majority is formed by Shiite Hezbollah and its allies, including the Christian Free Patriotic Movement founded by President Michel Aoun and currently headed by his son-in-law Gebran Bassil, as well as Amal Movement led by long-time Parliament Speaker Nabih Berri.

The electoral system has so held back the emergence of non-sectarian political parties and civil society representatives since it allocates seats according to sect.

The roots of popular discontent

The elections are the first since the youth-led protest movement broke out in October 2019 against a political class seen as inept, corrupt and responsible for a litany of woes, from power blackouts to piles of uncollected garbage.

The anger exploded into months of street rallies but lost momentum as the Covid-19 pandemic hit, together with a financial crash that the World Bank has labelled one of the world’s worst in modern times.

Popular fury flared again after a huge stockpile of ammonium nitrate that had languished in a Beirut port warehouse for years exploded in August 2020, killing more than 200 people and devastating entire neighborhoods.

Successive governments have since failed to chart a path out of Lebanon’s worst crisis since the 1975-1990 civil war that has sparked runaway inflation, deepened dire poverty and fueled a mass exodus.

Where the Lebanese state has failed to provide basic services, traditional political leaders have tended to step in with their decades-old patronage networks — a trend more alive than ever during the current crisis.

“The elections are not meant to assess the performance of politicians,” said Majed. “They are more a game of loyalty to whoever provides… the most basic services.”

Public sector jobs have long been among the main handouts, but now fuel and cash assistance also feature high on the list, giving an advantage to established parties over new opposition groups that lack funds and foreign support.

While bolstered by the 2019 protest movement, new independent candidates have also failed to build a coherent front that could energize a dispirited electorate, observers say.

Nearly 44 percent of eligible voters plan to abstain, according to a survey last month of more than 4,600 voters by British charity Oxfam.

Polling expert Kamal Feghali told AFP that many voters had hoped the newcomers would run “with a unified list and programme” but said that instead their competing electoral lists “will scatter the vote”.

While independents will likely do slightly better than in 2018, when only one of them won a seat, said Feghali, the winner once more is likely to be Hezbollah, Lebanon’s biggest political and military force, and its allies.

Iran-backed Hezbollah, first formed as a resistance force against neighbour Israel, is now often described as a state within a state that is all-powerful in regions under its control.

Its pre-election intimidation tactics are “salient”, said Oxfam, warning that such behavior tells voters “that change might be denied, and in turn might lead to either a reduction in turnout or a distortion in voting behavior”.

In east Lebanon’s Bekaa Valley, three Shiite candidates were running on an anti-Hezbollah list but withdrew last month, despite the expiry of a legal deadline to do so.

The move stripped the anti-Hezbollah list of essential Shiite representation and was widely seen by local media as a result of pressure by the powerful movement.

Intimidation and attacks have been reported in other regions of Lebanon, where other political parties are deemed to be in control. Opposition candidates as well as campaign volunteers have been threatened and attacked.

On April 15, a group of volunteers setting up the scene of an electoral event for an opposition candidate in Sarafand, South Lebanon, were beaten by Amal Movement supporters.

Campaigners for a secular list in Beirut were also chased away from Tariq al-Jdideh, a neighborhood in the Lebanese capital inhabited by a Sunni majority loyal to Future Movement and former PM Saad Hariri.

On Friday evening, two days before the poll, an independent candidate was beaten by Tashnag Armenian party supporters while campaigning.