Exploited at home and abroad

Though the Lebanese government exploits expats by taking a cut of money sent back home to their loved ones, there are ways to organize for change from abroad, writes Gino Raidy. 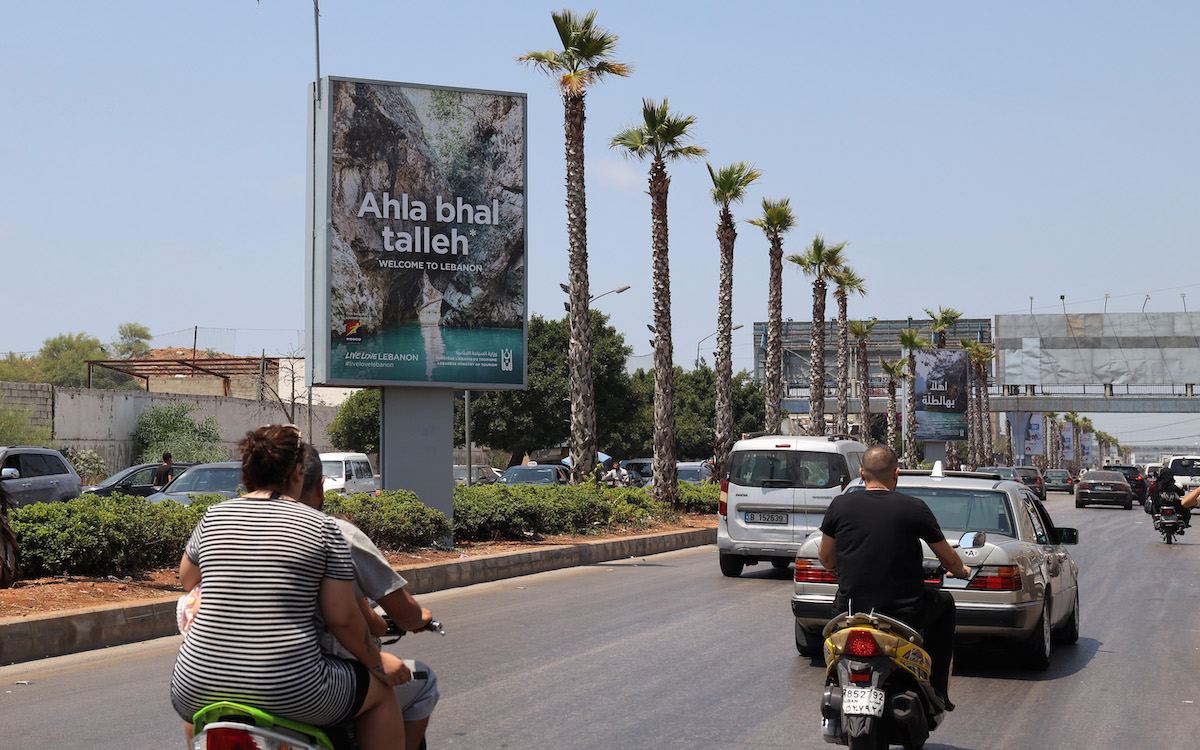 A welcoming billboard is seen along the airport road in Lebanon's capital Beirut on June 22, 2022, following a campaign by the Tourism Ministry to replace the pictures of political figures with images of natural sites. Lebanon's ailing economy should receive a welcome injection of more than $3 billion thanks to a rebound in tourist arrivals over the summer, the tourism minister said on June 22. Lebanon defaulted on its debt in 2020, the local currency has lost around 90 percent of its value on the black market, and the UN now considers four in five Lebanese to be poor. Photo: Anwar Amro, AFP

I left Lebanon and I’m not sure if or when I’ll ever be back. It’s not just me, though. Upwards of 215,000 Lebanese took off from Beirut’s international airport between 2017 and 2021. And yes, that period includes 2020 and 2021, when most of the world shut down borders due to the COVID-19 pandemic. One can only imagine what 2022’s numbers will look like, now that restrictions are lifted and Lebanon’s manufactured crisis is getting worse day by day.

Aside from the flurry of generic “brain drain” clickbait articles, this mass exodus could derail the Lebanese people’s march towards the tide of change that rose up on October 17, 2019. To put it bluntly, those leaving are the ones best equipped to resist those in power and take back the rights stolen from them by Lebanon’s ruling elite. This untimely (and not always voluntary) quasi-exile, means that the thorn in the government’s side is no longer as painful or effective.

That’s not even the worst part. Those lucky enough to find jobs in their new countries inevitably end up sending money back to the loved ones they left behind. A steady stream of fresh US dollars that the government and banks (that stole an entire nation’s life savings) take a cut from. They benefit from every single dollar sent to families and loved ones still trying to hang on.

Many Lebanese were forced to switch gears from toppling two governments in one year, to being forced to leave and send back money to help loved ones get through the crisis. Money that is helping that same government stay afloat. Making expats carry the burden of helping Lebanese residents survive alone has allowed the government that got the country into this mess to forge ahead with their historic ponzi scheme instead of figuring out how to stop this collapse.

The Ministry of Tourism’s recent campaign, “Ahla Bhal Talleh,” stops short of actually saying “give us fresh dollars, even though there’s no electricity and you might get blown up by explosives stored in a residential neighborhood.” It’s almost reminiscent of the post-war period when that same money-grabbing energy would be directed at wealthy Gulf tourists, who’d come to Lebanon to blow off some steam and indulge in what Lebanon had to offer, which was often illegal in their own countries. Of course, all of that stopped when Hezbollah joined Bashar El Assad’s extermination campaign against his own people. Fresh Lebanese expats have become the mid-2000s rich Saudis popping bottles in Beirut’s glitzy rooftop nightclubs, in the government’s eyes.

The question remains, was this a calculated strategy by those clinging to power, or was it an unintended byproduct Lebanese citizens, especially those recently in the diaspora, are left to grapple with?

This cruel nightmare scenario doesn’t have to be the diaspora’s fate though. The recent parliamentary elections showed that when done properly, Lebanon’s diaspora can do so much more than just wire money home to be promptly siphoned off into offshore accounts in Panama and Switzerland.

The first obvious task is to organize the diaspora in their adopted countries. After October 17, many groups coalesced and formed powerful communities that were able to play several vital roles to support the efforts in Lebanon. This can come in the form of creating support networks to circumvent the Lebanese banking system and make sure a steady supply of essentials is delivered to those that need it the most. It can also mean getting out the vote – now that the diaspora can vote – a critical step in several districts where change MPs managed to break the hegemony of absurd Sulta coalitions, like Hezbollah teaming up with Marwan Kheireddine and replacing the disgraced banker with Firas Hamdan in parliament.

Another role the diaspora can play is mostly reserved to Lebanese people living in representative democracies, where lobbying for the Lebanese people is a legal option and wouldn’t jeopardize their residency or dual citizenship. If anything has stirred Lebanese sectarian politicians into knocking off their worst impulses, it is the threat of sanctions, like those from the US Treasury Department. Having a coherent group of Lebanese lobbying to ensure their taxes aren’t squandered on corrupt government institutions, but instead go directly to communities suffering under policies often bankrolled by world leaders, such as French president Macron who came to the rescue of the ruling elite after the explosion on August 4, 2020. Imagine having a powerful enough lobby to influence Western governments into doing the right thing, or at the very least, stop funding the politicians that have brought the country to its knees.

Voting, organizing, and lobbying are just a few examples of what’s possible when Lebanon’s new diaspora decides to be more than a product forcibly pushed out to generate revenue and send part of that money back to the same people that made them leave in the first place. “Ahla Bhal Talleh” does not have to be the curse we give ourselves up to. The real risk is when expats decide they want to completely cut themselves off from Lebanon. That is a problem that cannot be easily remedied.

If you’re reading this in your rented flat in Paris, Montreal, Dubai or wherever you ended up, don’t give up. What you were able to accomplish in the tear-gas and rubber-bullet-filled streets was important, but making sure you support those still fighting back home is just as important. Reach out to other Lebanese in your city. Figure out how you can be useful to those that chose to stay, or worse, are unable to leave. Organize, lobby, vote and do whatever you decide is best to help your fellow citizens in Lebanon break free from the oppression we all face and prepare a Lebanon ready for your comeback, not just your fresh dollars when you go down on your annual vacation to check up on your grandma, wondering if this will be the last time you see her.

Don’t give up. Don’t forget those you left behind. Don’t let those that pushed you out win and benefit from your and your loved ones’ suffering.