The village of Al-Daouseh held funerals for four of its dead, including two soldiers, all of whom are from the same family. 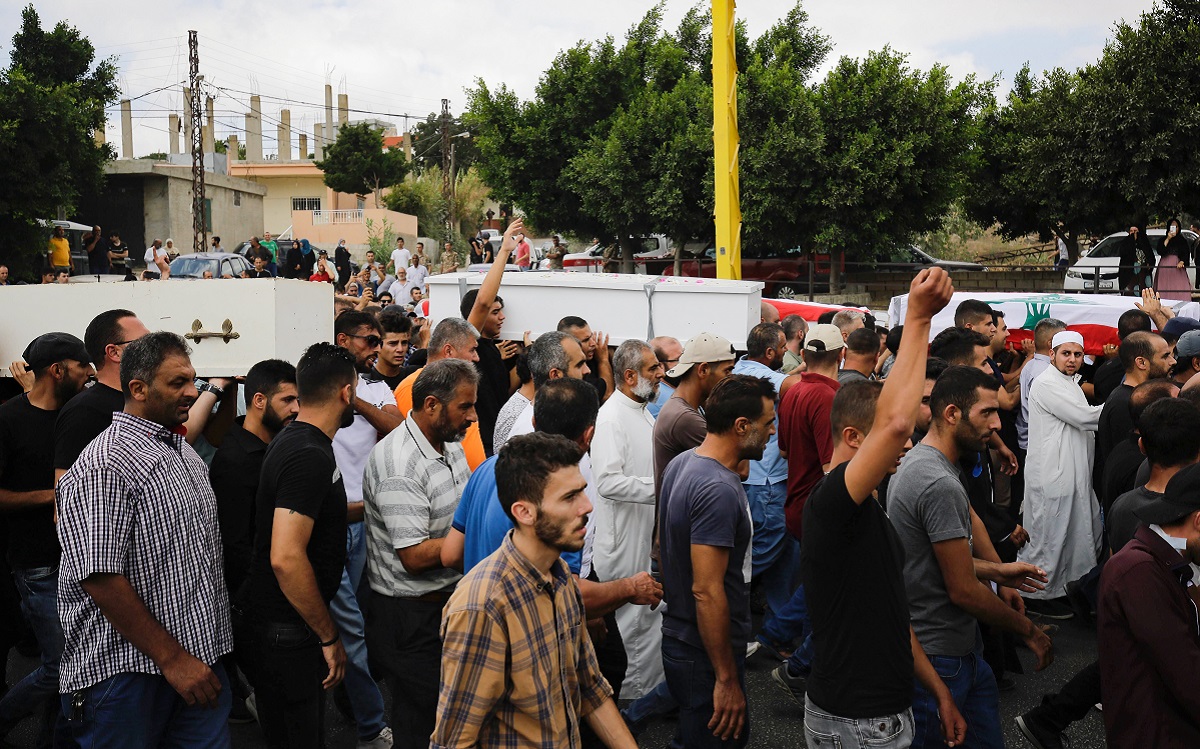 Mourners scarry the coffins of victims of a fuel tank explosion that occurred last week in Al-Tleil in Lebanon's Akkar region, during the funeral of four members of the Shteiteh family in the village of al-Daouseh. Photo: Ibrahim Chalhoub, AFP.

Families laid to rest Wednesday victims of the Akkar fuel tank blast that killed at least 28 people in northern Lebanon amid anger and sorrow, AFP reports.

The explosion on Sunday in Al-Tleil in the Akkar region scorched crowds gathering for confiscated petrol that the army was distributing in light of severe fuel shortages that have paralyzed a country.

The victims included soldiers and Akkar residents who darted to Al-Tleil after midnight to fill gasoline in plastic containers straight from a fuel tank that the troops had confiscated earlier on Saturday. The depot exploded in unclear circumstances.

The disaster came on top of an economic crisis branded by the World Bank as one of the world’s worst in modern times and follows an explosion of poorly stored fertilizer at Beirut port last summer that killed 218 people.

The village of Al-Daouseh held funerals for four of its dead, all of whom are from the Shraytih family.

“They died for petrol, if we had fuel this would have never happened,” said Mouin Shraytih who was burying two sons. One was 16 and the other 20.

“Political leaders and officials should consider what it is like to have two young boys and find them burned and charred in front of your own eyes,” the man in his fifties told AFP at the funeral.

Corpses from the tanker blast had been identified and transported from hospitals hit by power and telecom outages.

Dozens had gathered at the family’s home when a convoy of vehicles carrying the corpses arrived from a nearby hospital.

Shots were fired into the air as residents threw rice and flowers over the coffins.

Fawaz Shraytih, a relative of Mouin, was burying two brothers, both army soldiers.

“What happened is because of deprivation, Akkar is a deprived region,” he said.

But “all we do is pay with our blood,” he added, explaining that soldiers make up the bulk of Al-Daouseh’s male population.

There are eight soldiers among his own immediate family, he said.

Nearly 80 people were injured in the blast, medics said, many with severe burns. The wounded overwhelmed hospitals struggling to function without electricity.

A plane was due to arrive in Lebanon on Wednesday to evacuate severe burns victims to Turkey, the official National News Agency said.