HomeOpinionCommentaryFamily across the green line
Commentary
Mohamad A. Hamdan

Family across the green line

As the Israeli Knesset passes legislation that renews barring family reunification for Palestinian residents of the West Bank in Israel proper, Mohamad A. Hamdan looks at the difficulties in reconciling the discriminatory law with the idea of a democratic state. 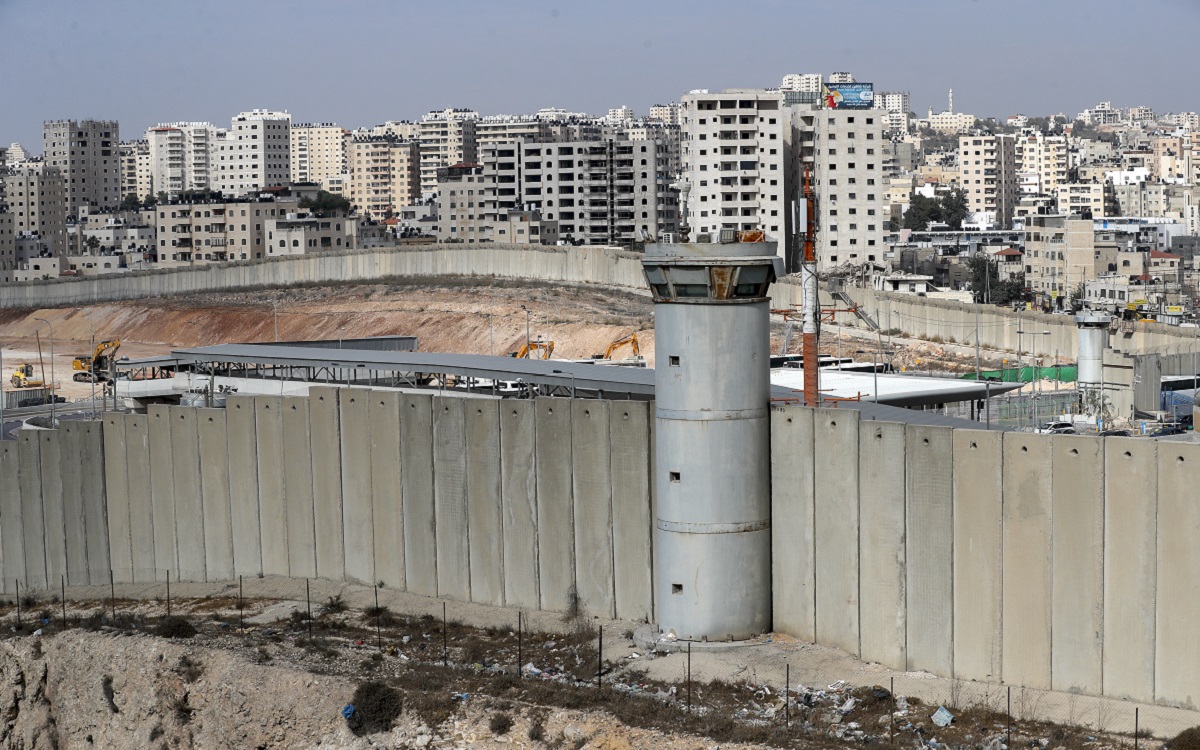 A general view shows a section of Israel's controversial separation wall (bottom) and machinery (L) working on the tarmac of the former Atarot airport (Jerusalem International Airport), which has been closed to civilian traffic since the breakout of the second Palestinian intifada (uprising) in 2000, near the village of Qalandia between the West Bank city of Ramallah and Israel-annexed east Jerusalem on November 25, 2021. Photo: Ahmad Gharabli, AFP.

Maqluba is a world-renowned Palestinian dish. But it also means“upside-down”.

Sari Bashi is an Israeli lawyer, writer, and mother who found this word suitable as a title for her latest book. In the land between the river Jordan and the Mediterranean sea, the term “upside-down” encapsulates the different walks of human life.

In Maqluba, Bashi recounts her relationship with her Palestinian husband through a political and personal memoir. Bashi’s story is one of love’s rigor in defying the limitations of her family’s exceptional circumstances. In a world that tries to separate them, Sari’s family grapples with checkpoints. Her husband, who lives in Ramallah, only a couple of kilometers away, cannot acquire legal residency in Israel, which makes their day-to-day lives burdensome, to say the least.

The constraints experienced by the family illustrated in Maqluba are features of the Israeli-Palestinian conflict and give rise to complications of an ominous nature in this seemingly perpetual situation of despair.

The previous month of February was brimming with international crises – from soaring gas prices to World War reminiscent events in Ukraine. Prior to these colossal events, the month, in its onset, also saw the release of the Amnesty International report on Israel, a 280-page document attesting the same conclusion other human rights organizations reached in the past – apartheid.

The apartheid label is one that many proponents of the so-called Jewish state would usually find unwarranted. The term was notoriously used in describing the former system of institutionalized racial segregation and oppression of black South Africans. Though the Jewish people have been at the receiving end of oppression, bigotry, and systematic eradication, they are being accused of inflicting a kind of horrific subjugation, reminiscent of that in South Africa, on a different people. Factoring in the intricacies of the Israeli-Palestinian conflict and the conflicting narratives, it would come as no surprise that many would find these allegations inaccurate and even blasphemous.

Accordingly, the report sparked the rage of pro-Israeli organizations and rebuke from governments, namely the United States, which dismissed the report as inexact pertaining to Israel’s actions against the Palestinians. “I reject the view that Israel’s actions constitute apartheid. The department’s own reports have never used such terminology,” Ned Price, the US State Department spokesperson, told reporters.

One month later, on March 11, Israel’s parliamentary body, the Knesset, renewed the Nationality and Entry into Israel Law which was first introduced in 2003. Free from ambiguity and prevarication, the law simply bars Israeli citizenship and residency to West Bank and Gazan spouses of Israeli nationals.

Historically, the citizenship law was first introduced during the Second Intifada, when Israeli intelligence services warned of a possible security threat from Palestinians “infiltrating” into Israel proper from the West Bank and Gaza. Apparently, the prospects of a terrorist infiltration 19 years later, encouraging the justification of this law, persist.

The features of this law are, au fond, racist. Sari Bashi is a Jewish Israeli lawyer married to a Palestinian professor in the West Bank. But most Israeli spouses of West Bank residents are Arab citizens of Israel, and they are the main targets of this unfair law.

The woman behind the bill

Interior Minister Ayelet Shaked, a staunch nationalist and a Knesset member from the Yamina right-wing alliance, has been keen on renewing this law. Known for her facetious speech, which is riddled with redolent rhetoric specific to the right-wing in Israel, Shaked is overtly indifferent to the tribulations of the Palestinians and their national brethren in Israel proper.

In other words, the Palestinian citizens of Israel, who are primarily targeted by this law, are of little importance for the Israeli government in Yamina-style politics. This minister of the Interior candidly skips over the usual profligate reasoning and unapologetically accepts the racist measure of aiming to maintain the country’s Jewish majority.

The implications of the nationality law attest to a clear dissonance that democratic pro-Israel proponents cannot reconcile.

Shaked’s chutzpah (audacity) is recurrent in Israeli political discourse and social media. As the law was passed, Shaked tweeted that it was a victory for “a Jewish and democratic state”. Only to be answered by Arab MK Ayman Odeh: a victory for “ an apartheid state.”

The law was initially put to Knesset as a litmus test for the newly formed government. However, it had failed to pass as Arab and some left-wing lawmakers from the ruling coalition refused to support it.

The Israeli declaration of Independence includes a strict illustration of a specific democratic nature for the State of Israel. “It will ensure complete equality of social and political rights to all its inhabitants irrespective of religion, race or sex; it will guarantee freedom of religion, conscience, language, education and culture; it will safeguard the Holy Places of all religions; and will be faithful to the principles of the Charter of the United Nations,” the declaration reads.

The Moetzet HaAm, the Provisional State Council, signed the declaration on May 14, 1948. The specific words making up the phrase “inhabitants irrespective of religion, race or sex” were included in the document as to attest to the democratic values the leaders of the Yishuv upheld.

Israel markets itself around the world as a democracy and it may be so, however flawed. If we take this into consideration, how can laws such as nationality law be reconciled? For those who justly claim that the apartheid label is too hazardous to explore, then what can we call this?

Democracies exist to protect and safeguard the individual rights of the citizens, and in turn strengthen the societies they belong to. The implications of the nationality law attest to a clear dissonance that democratic pro-Israel proponents cannot reconcile.

The increasingly popular and parliamentary indifference to the plight of the Palestinians perpetuates an undesired situation that is not only tragic to the Palestinians but also damaging to Israeli society.

The Jews in Israel have no place else to go, and neither do the Palestinians. In a sense, these “trivial” stories of misfortune and limitation like Sari’s and thousands of Palestinians’ are quintessential to the necessity to create a better reality.