Families of victims of the port explosion gathered in protest to mark the passing of fourteen months with constant obstructions to the current investigation, and no justice served. 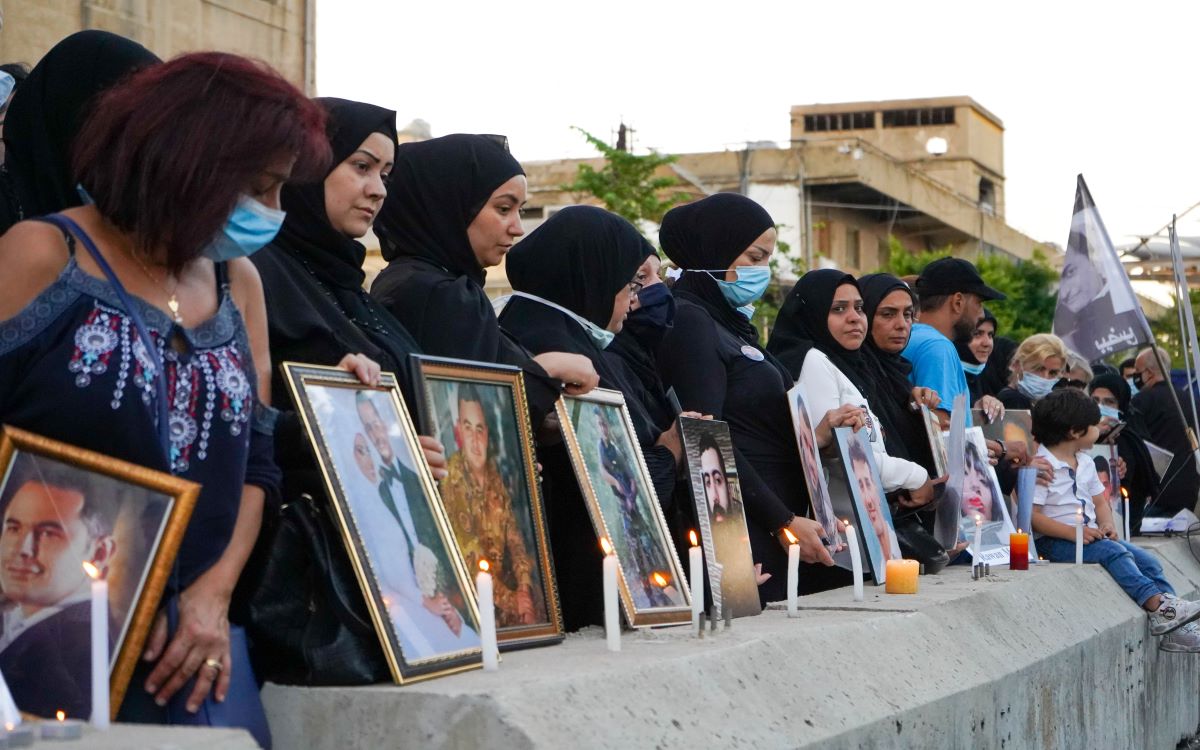 The sit-in was quiet, as most sit-ins organized by the Beirut blast victims’ families are.

It had been 14 months since his 25-year-old daughter died in the August 4, 2020 explosion, and Majid el Helou, a tall man in his late 50s, held her picture alongside other fathers with photos and mothers wearing black scarves.  They had gathered at gate 3 of the Beirut port to mark the dark anniversary. They were barely 20 people.

El Helou was angry on Monday, but, unlike only a week before, he was hopeful and willing to keep fighting for justice.

“We have faithful judges, we have courageous judges, they showed no fear and we won’t either. Together we will reach justice,” he told NOW.

Just a few days earlier, on September 29, scores of protesters, families of Beirut blast victims and supporters of political parties had scuffled with police and with each other in front of the Palace of Justice in Beirut, divided by political views.

The chief investigator in the Beirut blast probe, Tarek al Bitar, was suspended from the port investigation last Monday, on September 27, after one of the politicians he called in for interrogation, former Interior Minister Nohad el Mashnouk, filed a complaint with the court to remove him, citing lack of objectivity in the probe. Bitar was suspended the minute he was served Mashnouk’s citation, but Amal MPs and former minister Ghazi Zeaiter and Ali Hassan Khalil had also filed lawsuits at the same court, citing the same “bias” in the blast probe.

Moreover, MP and minister Youssef Fenianos, also a suspect in the Beirut blast investigation and summoned for questioning by Bitar, sued Bitar at the Supreme Court.

All former ministers who submitted cases against Bitar are current MPs and, according to Lebanese law, they have the right to immunity from prosecution. But, this immunity stands only while the Parliament is officially in session, which begins on October 19. Before that, they can be summoned for investigation.

The United Nations and France both pressed Lebanon to proceed with transparent investigations after the probe was suspended last week. Human Rights Watch and Amnesty International have accused authorities of brazen obstruction of justice and callous disregard of victims’ families.

Bitar’s suspension had enraged families of victims. It also coincided with the judge reportedly receiving threats from Hezbollah’s security chief Wafiq Safa. Hezbollah secretary-general Hassan Nasrallah has slammed the probe on many occasions, claiming it was orchestrated by Western powers. Bitar himself admitted officially that Safa had threatened him.

So, on September 29, in front of the Palace of Justice in Beirut, scores of protesters and families of victims demonstrated, demanding that politicians stop tampering with the investigation. But the scuffles started when part of the crowd chanted “Hezbollah is a terrorist”, raising objections from other protesters, who said the attempts at dismissing Bitar had come from various parties, and not just the Party of God.

If they remove judge Bitar, I don’t think I can trust the one that comes after. He’s a good man and he really wants to arrive at the truth.

But the Appeals Court rejected the cases against Bitar on Monday, saying such cases were not in its jurisdiction, and fined Mashnouk, Zeaiter and Khalil 800,000 LBP (US$530 at the Central Bank rate which is still used by official institutions in Lebanon, but only about $50 at the current market rate) for intentionally submitting the cases to the wrong court.

Victims’ families and lawyers say that the cases were meant to delay Bitar’s push to question the suspects until they regain immunity. In fact, the day after he was reinstated, Bitar summoned the MPs for questioning once again: Khalil on October 12, Machnouk and Zeaiter on October 13. Former Premier Hassan Diab, was also summoned on October 28.

So far, the investigation has dragged on, facing obstacles and procedural complaints at every turn.

The first chief investigator, Fadi Sawan, was suspended and then fired in February 2021, after Zaiter and Khalil sued him at the Supreme Court for bias in the investigation, and for not following procedure.

Bitar replaced Sawan renewing the investigation following procedures by the book, and requested that all institutions  lift immunities of current deputies and dignitaries, something Sawan hadn’t done. Eventually, after hearing scores of witnesses, Bitar called in the same former dignitaries and security officials for investigation.

The victims’ families say they will not stop the sit-ins until the Lebanese government allows the investigation into the catastrophe to follow its due course.  All the attempts to remove judge Bitar indicate that he has ruffled some feathers that haven’t been ruffled before, El Helou told NOW.

“If they remove judge Bitar, I don’t think I can trust the one that comes after. He’s a good man and he really wants to arrive at the truth,” Helou said.

A call for unity

Rima, who lost her son Mohammad Alaa Din Damaj in the blast, has a difficult time holding  back her tears when she talks about the probe.

“I’m happy that we still got to keep the judge Bitar and I have hope but will they go through the same suffering as our loved ones did? I doubt so,” she said, referring to the politicians she believes are responsible for the blast.

“Despite all the issues we have in our justice system, we still have a few good judges and we hope more of them will join our case,” he said.

He also addressed the Lebanese people in his speech and asked them to join their protests. But under the condition of unity and without targeting “certain political parties”.

“We need to be united under one slogan –  “Truth, justice and accountability”. We will refuse any attempts at turning our case into a political fight, this is a judicial issue and it’s about pain and suffering so please spare us your political fights,” he stated.

Rima al-Zahid, whose brother was a port employee and died in the blast, said that she indeed felt as if their case was being manipulated from different angles.

“We have been suffering for 14 months from the interference of politicians and sectarian leaders meddling with the investigation,” seh pointed out.  “When I heard that the investigation was halted, I felt that we were being betrayed again, and that they were killing us a second time,” she added, breaking into tears as she spoke.

Although Hotteit said he had hope in Judge Bitar, he still warned against the possibility of the case being lost or dismissed, and added that their “options were open”.

He refused to elaborate and said that he was not meeting with anyone yet to look into options to take the case to the international level. But he stressed that the families would not let the case die down, even if the justice system in Lebanon did so.

Another gimmick Hotteit warned against was the tactic of postponement that the politicians were playing in order to delay the investigation.

“We ask for judge Bitar to hurry up with the investigations so they [the politicians] don’t manipulate the law and find another way to postpone the sessions.”

Hotteit also stressed  the importance of the support of the people and called for all the Lebanese to join their movement so that their case doesn’t become a lost cause.

“We will get justice, we definitely will,” one of the members of the families yelled before the crowd dispersed.