From Aleppo to Kyiv

Continued failure or lessons learned? The West’s focus on geopolitical interests and its hesitance to deter Russia in Crimea and Syria in 2014 and, respectively 2015, may have led to the current invasion of Ukraine, and it is yet unclear if the international community has learned from the past, writes David Isaly. 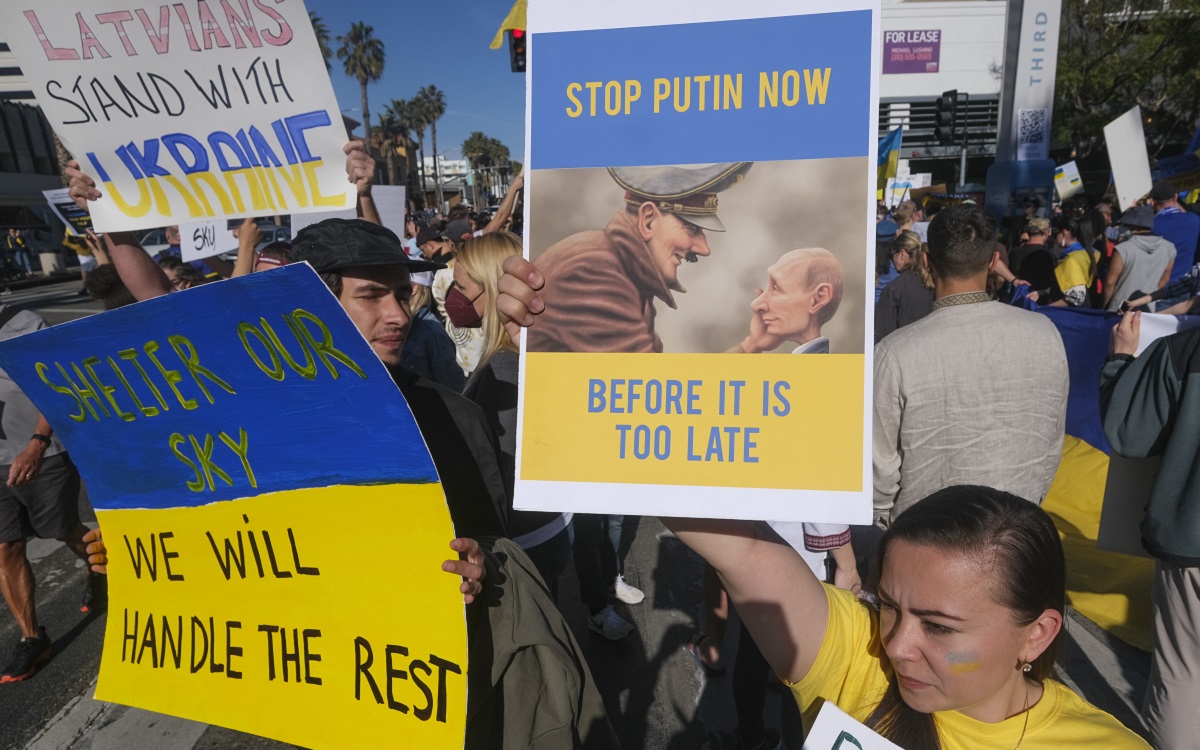 Demonstrators march during a rally in support of Ukraine, in Santa Monica, California, on February 27, 2022. Dressed in the blue and yellow of Ukraine's flag hundreds of thousands of people took to the streets worldwide Sunday denouncing Russia's invasion of its neighbor. From Berlin to Baghdad, from Washington to Saint Petersburg, demonstrators chanted "shame" against Russian President Vladimir Putin while others waved banners with slogans like "Putin murderer" or "stop the monster." Photo: Ringo Chiu, AFP.

In the final months of 2016, one of the most important battles of the 21st century came to an end. The Syrian government, backed by Russian airpower and Iranian ground forces, launched a brutal campaign to besiege and recapture east Aleppo, which the armed opposition had held since 2012. Though Russia directly entered the conflict in 2015, claiming that it was only in Syria to fight the Islamic State, it quickly became apparent that this was not the case. The first year and a half of Russia’s air campaign almost exclusively focused on areas not held by IS, like Aleppo.

After the city fell, I distinctly remember an intense feeling of frustration. Of course, I found it upsetting that the government had won the battle (and likely the war itself), but what really bothered me was the international community’s lack of action. Nobody seemed to care about the fate of Syrians whose lives were destroyed by one of the worst conflicts in recent memory. As Syrian and Russian warplanes bombarded Aleppo, the world remained unmoved.

Over five years later, I am genuinely hopeful that things have changed and that the international community, primarily the West, has learned some lessons from Syria. But, regardless, I still feel some of the frustration I felt after the fall of Aleppo.

On February 24, at 5:00 AM, Russia began its invasion of Ukraine. After months of building up its forces along Ukraine’s border, Russia’s Vladimir Putin announced that he would “de-nazify” Ukraine through military force. As of right now, the Ukrainians are fighting valiantly for their country’s sovereignty, and Russia has not yet resorted to the large-scale bombardment seen in Grozny and Aleppo, but it is only the early days of the war. What is to come next could be equally, if not more, horrifying.

The battle of Aleppo

In the first year of the battle, it looked like the rebels were to defeat government forces, as the rebels managed to encircle them in the west of the city. However, with increasing foreign support for the government, the siege was broken, and the battle fell into a brutal stalemate.

Russia’s air campaign, beginning in September 2015, reversed the course of the war, and one of the Russians’ first priorities was securing Aleppo. In 2016, the Syrian government and its allies launched a series of offensives against Aleppo, eventually besieging the rebel-held enclave in the east of the city by the end of the summer. The brutal siege, like many others in Syria, led to starvation and despair for Aleppo’s civilians. After four months, the city finally fell in December, ending the battle and deciding the course of the rest of the war.

In that campaign, the Russian air force pummeled the city with near constant airstrikes. Russia and the Syrian government claimed they were fighting IS and other Islamic extremists in an attempt to justify the brutality of the campaign, but this was not the case. Extremist groups were present in Aleppo (notably, none of them were associated with IS), but so were many civilians. Regardless of the political posture of an armed group, it is still a war crime to bombard a dense urban environment indiscriminately.

Nonetheless, the international community and the West did little to prevent the onslaught.

A war of information and narratives

Throughout the war in Syria, the government and its allies continually claimed to be fighting terrorists. They denied war crimes committed by the government, either saying they simply did not happen, or that the rebels actually committed the crimes. Most importantly, from the very beginning of the revolution, the government claimed that the rebellion was a Western-backed conspiracy to destroy another Middle Eastern country, like Iraq or Libya.

Of course, there is a grain of truth to all of these claims. Good propaganda and misinformation manipulate the truth and pad it with falsehoods to fit a specific narrative. Many of the armed groups that rose up against the government were extremists and targeted civilians. Many of these groups did commit war crimes, especially as the conflict dragged on. And Western countries did support the opposition, first with non-lethal aid and then shortly after with weapons.

However, the important distinction is how these developments progressed, and the degree to which the West supported the uprising. Crimes at the hands of the Syrian government and its allies accounted for the vast majority of crimes committed throughout the war, and the government severely exaggerated the West’s support for the rebels.

Regarding Ukraine, Russia has employed similar narratives to justify its aggression over the past eight years. Russia has claimed that the Ukrainian government is led by nazis and is a NATO puppet. It has also criticized the West for its interventions in Afghanistan, Iraq, and Libya.

In Syria and Crimea, Russia successfully subverted the narrative and won the information war. Thankfully, Western governments and analysts have learned from their mistakes and have done a far better job of countering these narratives in the past few weeks and months.

Again, there is some degree of truth to these claims. Some neo-nazi groups do fight for Ukraine, most notably the Azov Battalion, and the NATO does support the Ukrainian government. However, the Azov Battalion is one tiny group in a massive military force, and the far-right is relatively unpopular in Ukrainian politics. NATO has supported the Ukrainian government, and perhaps has over-reached in some ways, but that is hardly a moving justification for a full-scale invasion.

The West’s behavior across the world, especially in the Middle East, has been atrocious and has definitely provided Putin with some rhetorical cover, but this does not justify more atrocious behavior by Russia.

In Syria and Crimea, Russia successfully subverted the narrative and won the information war. Thankfully, Western governments and analysts have learned from their mistakes and have done a far better job of countering these narratives in the past few weeks and months.

Indeed, the West was simply not prepared for the spread of disinformation that was a hallmark of the war in Syria and Ukraine. In the case of the annexation of Crimea and the first year of the war in Donbass, Western nations initially did not even know what was really happening, as Russian forces, known at the time as “little green men,” did not bear any Russian insignias or markings, and Russia denied its involvement.

Why Ukraine has been different from Syria

Russia’s recent invasion of Ukraine has dramatically transformed the West’s response to its aggression. Many analysts mark Russia’s invasion of Georgia in 2008 as the beginning of its territorial ambitions, though one could certainly argue that its involvement in the Tajikistani civil war in the 1990s signaled Russia’s desire to exert itself in countries that were formerly part of the Soviet Union and Russian empire before that.

Using Georgia as a rubric for foreign intervention, Russia launched its intervention in Ukraine in 2014, annexing Crimea and assisting Russian separatists in the country’s east. The West responded with sanctions, but this did not deter Putin’s dream of restoring Russian influence in neighboring countries.

Russia’s 2015 intervention in Syria then paved the way for it to expand its operations in the Middle East and Africa. Again, the West did not respond in a meaningful way and essentially ceded Syria to Russia. Since it intervened in Syria, Russia has deployed mercenaries to Libya, Sudan, and the Central African Republic, strengthening its geopolitical and international position.

With this most recent aggression, Western countries are beginning to truly understand that Putin’s ambitions are still likely not satiated. Considering his rhetoric regarding Finland, Poland, and the Baltics, it now seems clear that Putin wants to create a new Russian empire.

After years of disunity and squabbling, the United States and Europe finally seem united against Putin’s plans. The sanctions against Russia that are currently on the table are the most robust measures the West has considered since the collapse of the Soviet Union. The support being sent to Ukraine is also far more substantial than that given to the rebels in Syria.

Indeed, it is beginning to look like a new world order may be upon us.

Though I am, of course, happy to see an oppressed people being supported against an occupying power, I still wonder why such goodwill was not extended to Syrians or other oppressed peoples in recent years. To be clear, I am, by no means, a proponent of Western intervention, especially in the Middle East, but the West can still play a positive role in the world.

Unfortunately, global powers, primarily the United States, tend to only work for their own geopolitical interests, and the lives of ordinary people are simply an afterthought. The West could have taken a stronger position in Syria, but it was not willing to deal with the potential consequences of such a position, opting to drip-feed support to the rebels, only worsening the conflict.

Though Ukraine will likely lose this war, the price Russia will pay has already been immense. Putin is dragging Russia into the void, and the world may never be the same.