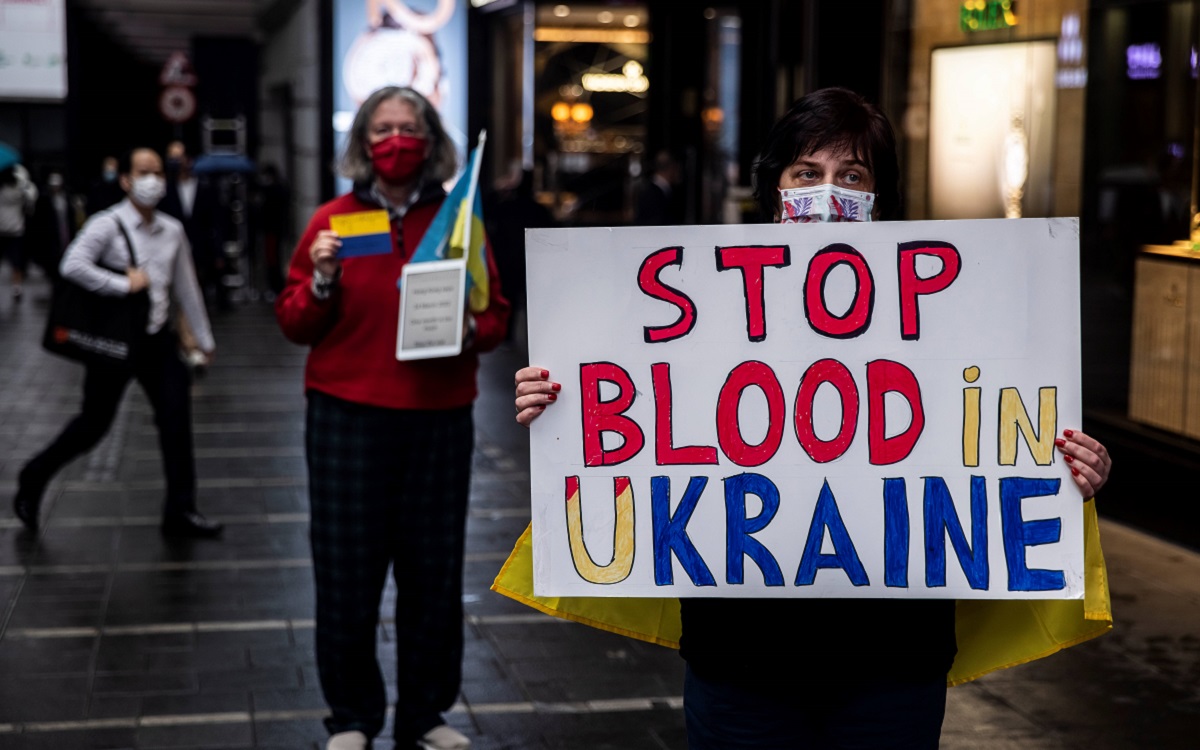 A woman (R) holds a sign during a protest to mark the one-month mark of Russia's invasion of Ukraine, on a street in Hong Kong on March 24, 2022. Photo: Isaac Lawrence, AFP.

We weren’t necessarily friends, but we knew each other’s names through our work. He was American and covered Eastern Europe for various international publications. I covered Balkan affairs for a regional English language publication.

He told me he had gotten inspired on many occasions by the work done by this small regional outlet – my work and my coworkers’. Until one day, he told me he had read one of my pieces and that he wanted the contacts of the people I had interviewed because his pitch, on the same topic and citing the same sources, had been accepted by the New York Times. I never replied to his message and he never spoke to me again. But he repeated the same thing with my coworker covering a neighboring country.

We both felt frustrated. We were told our work on covering corruption, investigating local oligarchs, or explaining foreign policy matters was always great to inspire foreign journalists, but we were “locals”. We were often asked to go to conferences to explain our countries and regions to experts who wrote opinion pieces in international media about our countries and regions.

But we were never trusted to formulate articles in English about our countries and regions. And yet, we wrote in English and the reason they even knew our names was due to the fact we published in an English-language publication.

Another friend of mine was trying to publish a book on Lebanon and the publisher rejected her proposal because she was not famous enough. How famous should I be, she asked. “Well, in order to actually matter, you have to have published in a well-established outlet, like the New York Times. Not some small magazine in the Middle East.”

All this is very much visible to me in the coverage of Ukraine, as it had been in Syria. I see local journalists finding incredible ways to cover the news in order to avoid the system. For instance, I am still amazed at how a group of Romanian reporters is able to cover the conflict on the ground by using a Discord server. They share their daily experiences, talk about their trauma,  verify information and exchange contacts.  They are each other’s filters.

I know this sounds familiar to many of my Middle Eastern fellow journalists. In Syria, I saw young citizen journalists setting up their own war coverage hubs, I saw them verifying information from several sources, dismissing the fakes, and even looking into metadata of videos to verify their accuracy, all from a house in Akkar, north Lebanon. Yet the content they provided was not seen as reliable by editors in newsrooms of international outlets and never made it to the international public. While news run by Sputnik calling the anti-Assad uprising Islamist did reach international audiences. And while international news wire reporters in Beirut were struggling to get a point of view from the Assad government to “balance the story”. It took quite a while for the International news media to wake up and realize that their rigid methodology did not match the conditions in the field.

The lack of trust in “local” writers, the exploitation of their connections and knowledge of the field and their being shoved to the status of “fixers” are not Middle East things. They are world things. It is not about regimes and censorship in the region, as Asser Khattab wrote at the beginning of the week.

On the contrary, it’s about the way the global media system functions, which is pretty much a mirror of the international system in general. It is a patron-client system, based on flawed and instinctive trust-based decisions – and it’s very culturally hierarchical.

Call me Marxist, I don’t mind.

What we call international outlets are located in Western developed countries – the developed Center.

They allow some local voices, but only local voices educated in the West or somehow recognized by the West as representative.

In many developing countries, such tricks of the trade differ from those of Western media. Journalists and editors follow different practices, because it is one thing to have free access to government documents,  databases and satellites, and another to have to go around censorship, armed non-state actors, and abuse of power by officials. To rely on witness accounts, whistleblowers, and non-official sources to produce an investigation. In many cases, articles normally published in local media outlets, regardless of the region, are not publishable in international media outlets because they wouldn’t fit their information verification process.

We generally consume news the same way we did in the 1980s and 1990s. We watch our local television and read our local websites to get our local news and turn to international Western outlets to see what they say about us and to read coverage of other regions.

For instance, many international news wires never published accounts of war crimes in Syria because they could not be verified according to their rules. However, there is proof that some famous international reporters made up stories, only they were discovered years later when technology made it possible. The double standards of trust.

In Syria’s case, local media, especially in Lebanon, did publish those war crimes stories. Not because their practice of journalism is flawed, but because journalists working on the ground and their editors understand the logic of the field. They understand the culture and the society. They can tell what is real and what is not and they have access to the witnesses.

But the information they publish doesn’t reach readers on the international level, because the public doesn’t look for it in regional and local media, they look for it in media outlets at the Center.

There are, of course, exceptions. There are Western journalists who live their lives in developing countries and learn the local culture, not only the language. But although the level of awareness is growing, the general practice remains the same.

The circulation of information at a global level is Western filtered.

The source of inequality in the media system is not only in the way outlets make their editorial choices, but with the way audiences consume information. Even in the age of the Internet, when we have access to everything from almost everywhere (unless there is some form of state censorship on media), we still turn to the same “international” outlets for our news. Our cable networks will not allow access to a television station from Malaysia or the Philippines or Ghana, but it will definitely have CNN, BBC and, possibly Qatar’s Al Jazeera and China’s CGTN. These international channels will also curate content according to the region they broadcast to. They “balkanize” their content, adapt it to what they think the public would be interested in.

They remain the landmarks in terms of media coverage and of innovation in journalism. They are the hegemons of our information system.

Technology has advanced really fast, but our consumption habits cannot follow with the same speed. They were formed in an age when major, rich and highly circulated outlets from developed nations in the West were the only ones providing information from various corners of the world. We generally consume news the same way we did in the 1980s and 1990s. We watch our local television and read our local websites to get our local news and turn to international Western outlets to see what they say about us and to read coverage of other regions.

Coverage of events happening in other regions by our local media are also mediated by these Western based journalism hegemons. A gazillion local outlets will simply translate what hegemons publish. That is how we find out in the Middle East about what happens in Australia or South America. That is how news about the Middle East reaches audiences in Eastern Europe or East Asia. By being covered in international news wires and international outlets, often in a standardized way.

The problem is that in this global cycle of information, there is a missing link between peripheries. People in the Middle East don’t read outlets from Eastern Europe, South-East Asia or South America. They read directly outlets published at the Center or get the news in their local outlets translated from the Center.

In this system, information from one periphery to the other becomes oversimplified, and often leaves room for misunderstanding and misinformation.

Let’s take the example of the Ukraine war.

Someone shared an interesting post from a social media platform with me the other day, trying to convince me that it was NATO’s fault for trying to expand into Ukraine.

The allegory in the post went like this: the husband has an argument with the wife and she says she blames Russia for invading Ukraine; he says it’s NATO’s fault for trying to expand into Ukraine; she insists that war is wrong and that Russia has no reason to invade Ukraine, because NATO did not attack Russia; before bed he goes to the kitchen, picks up a knife and places it on the nightstand, on his side of the bed; she panics; he says that this what Russia felt when Ukraine wanted to join NATO.

There is obviously a lot wrong with that story. And the fact that it exists and is being circulated on social media, and some people believe it, has a lot to do with the way we consume journalism and the fact that information is often   oversimplified.

Many wonder why the war in Ukraine was so sudden. It wasn’t.

If one looks at the regional English-language media in eastern Europe and the Balkans for the past two decades, they would see plenty of coverage of the Ukrainian crisis and the attempts by the Russian state to use energy giants like Gazprom to blackmail the government in Kyiv in order to get it in line with Moscow’s rules.

Ana Maria Luca is the managing editor of @NOW_leb. She is on Twitter @AnaMariaLuca79.