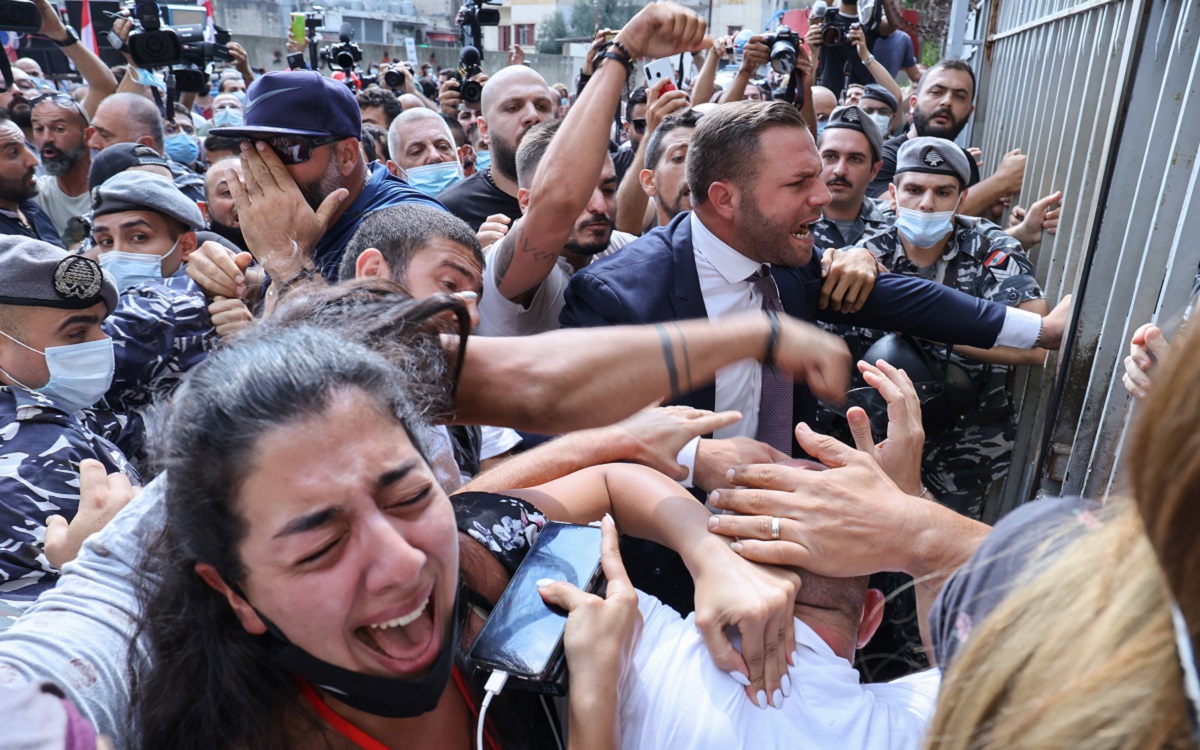 Protesters during a demonstration on September 29 at the Beirut Justice palace. Photo: Anwar Amro, AFP

I never expected politicians to actually tell Ronnie Chatah and his family straight to their faces there was a political pact to not ask questions. But they did.

It is not like nobody knew. Of course, no one really talked about it, no one addressed the murders officially. There was always some short statement with a promise of an investigation. The investigation would be opened and then, well, nothing.

Everyone knew there was no probe, no trial to be expected. It was known.

When I sat to start this newsletter, I was about to write that our colleague Ronnie Chatah lost his father on December 27, 2013.

I stopped because it would have been wrong. He didn’t lose his father. His father, Mohamad Chatah, then Finance Minister, was taken from him.

Lokman Slim was murdered in a mafia-style execution, shot in the back, on the side of the road. In South Lebanon, where nothing moves without Hezbollah knowing.

Wissam Eid was murdered after he discovered who had killed Rafik Hariri.

Many other people were murdered. Many, many others died just because they happened to be there.

Over 200 people were murdered when the ammonium nitrate exploded and the tragedy continues, with people succumbing to their wounds still.

A time to no longer be silent

I am still in awe at Ronnie’s courage to open his wounds. I am still in awe at all the effort he is making to bring together people who have seen their families killed and who were told for so many years to keep silent and go on with their lives as if nothing happened. To speak up and show them that they are not alone. At the cost of reliving the grief.

Ronnie told the story in his last week’s piece in NOW. Read it here.

I am in awe at the efforts Monika Borgmann, this titan of a woman, is making. Channeling her grief after her husband Lokman Slim’s murder into keeping not only his cause alive, but also showing other victims’ families that they can and should speak up. That it’s too much.

I am also in awe of the woman crying in the picture above, taken by AFP’s Anwar Amro in front of the Justice Palace in Beirut on September 29, as activists and families of the victims of the port blast protested against the suspension of the investigation.

I am in awe at all of them pushing the boundaries of the perennial “it is known” served by politicians who don’t want to take any responsibility for their incompetence that led to many murders, and, eventually, to mass murder.

Suspended: Tarek al Bitar, the chief investigative judge who leads the probe, was suspended on September 27 after a former Interior Minister Nohad Al Mashnouk requested his removal citing lack of objectivity. It is the second time the investigation is suspended. In December 2020, the probe was suspended and at the beginning of 2021 former chief investigator Fadi Sawan was removed following the same procedure.

Families and human rights groups said was another blatant case of political obstruction.

Worried:  Two US Senators, Jim Risch and Bob Menendez, ranking member and chairman of the Senate Foreign Relations Committee, have released a statement in reaction to the suspension of Judge Tarek Bitar’s investigation saying they were “concerned”.

Another reminder: The UN Human Rights Council is still in session for another week and it would be a good thing if at least one state would submit officially a proposal to send in an international fact-finding mission to Lebanon. Sally Abou Al Joud asked experts about the developments on that front.

Another batch of sanctions

In cooperation with Qatar: The United States announced on Wednesday it was imposing sanctions on Hezbollah financiers in coordination with Qatar, a US ally that has kept cordial relations with Iran.

The Treasury Department announced that it was taking action against seven people including Qatari nationals Ali al-Banai and Ali Lari, who it said have secretly sent tens of millions of dollars to Lebanon, both through banks and by cash couriers.

Qatar’s relationship with the United States shot up in August as it became the transit point for more than half of the 100,000 people evacuated from Afghanistan as the Taliban took control.

Business as usual: Hezbollah said on Thursday that it shot down an Israeli drone and it was seen as a great victory on its television channel al Manar.

On August 12, the Israeli army said it had shot down the previous night a drone from Hezbollah that had crossed into Israeli airspace.

Another reminder: Here is what IMF Managing Director Kristalina Georgieva said during the August 4 donor conference hosted by France:

“We know the areas of action. We know what needs to be done:

The struggle for (electric) power

Turkey is out: Turkish company Karpowership supplying electricity to Lebanon from two power barges off the coast of Beirut since 2013 said Friday it has halted supplies after its contract with the Lebanese state electricity company Electricite du Liban expired.

It had said earlier that EDL owes Karpowership overdue payments of over $100 million.

A bad deal: An investigation by Nada Maucourant Atallah in L’Orient Le Jour published in July revealed that the contract with Karpowership, which was supposed to be a temporary solution, has cost Lebanon a fortune – $750 million – after the contract kept going for eight years.

A bit of math: Lebanon needs 3600 MW. Back in 2015, studies by the US Energy Information Administration suggested that natural gas–fired power plants were cheaper to build with overnight capital costs ranging from $676 to $2,095 per kW, depending on the technology. This means that Lebanon would have needed, with the most advanced technology, roughly $7.3 million to build natural-gas powerplants able to supply the entire country.

It also means that, with some competence, some political will and a bit of diplomacy with Jordan and Syria (just like it happened in the past month), Lebanon could have started importing natural gas a long time ago, when it had the money. It just didn’t have the political will.

Iran is (again) in:  A second tanker arrived in Banyas on September 24. A third one is one the way.

The third tanker carrying Iranian gasoil or gasoline for Hezb’Allah’s distribution in #Lebanon (via Baniyas, Syria) has now re-appeared on AIS. Her name is FORTUNE (9283746) and has entered the Gulf of Suez from the Red Sea. FAXON, FOREST and FORTUNE visited Venezuela in 2020. pic.twitter.com/17fD0VqjZP

Jordan working on it: PM Mikati greeted his Jordanian counterpart Bisher al-Khasawneh at the Grand Serail in Beirut on September 30, where they exchanged words of “brotherhood” and mutual support and gratitude and all.

More importantly, al-Khasawneh said there were talks to provide electricity to Lebanon as soon as possible and expedite the export of natural gas from Egypt. The maintenance of the grid is set to done by the end of October, according to Jordanian Energy Minister Hala al-Zawati.

There may be a catch in the deal, and many experts have already warned about this: the normalization of relations with Damascus, despite the war, the killings, the victims, the refugees.

Iraqi oil: In July, Lebanon and Iraq signed a barter deal. Baghdad would provide Lebanon with a million tons of heavy fuel oil per year, while Lebanon would provide medical services. But Lebanon cannot use the crude, it doesn’t have a refinery. According to Megaphone, the devil is in the details: the Lebanese side refused a cheaper deal to refine the oil in Egypt and opted for a contract with a third party (company) that would take care of refining the oil. The bidding process is a little opaque, some government officials are talking about “commissions”.

No criticism: The Cultural Bureau of the Lebanese government is back at its old job. The play called “Tanfise” was banned from Mishkal Festival on Saturday because it criticizes the government and the president. Therefore, the actors played on the street and it went viral. Lesson possibly learned: stop trying to censor art in the age of social media. It’s 2021. Nothing can be silenced anymore.

The doctor-minister: When a minister tells journalists they should call him “doctor” because he has a PhD when he’s supposed to come up with coherent policies in a country that is falling apart is a gaffe that sticks to one’s career. It’s like banning journalists from the presidency because they don’t address the president with “His excellency”.

Moliere wrote a play once. It describes the “grand” situation.

The Beirut Banyan talked about the history of public transportation in Lebanon and how trams, trains and public buses vanished from the country with Mohamed al Chemaa, researcher at The Beirut Lab.

On Monday, UN’s Special Tribunal for Lebanon is hearing an appeal against the acquittal of the suspects in the Rafik Hariri assassination.

Also on Monday, US State Secretary Antony Bliken will be in Paris. After the Australian submarine issue inflamed transatlantic relations, Lebanon may not be very high on the agenda, but there is a chance the topic would show up in the conversation.

On Tuesday morning, the professors of the Lebanese state University will hold a press conference to announce whether they will go on strike as they warned.

On Wednesday, the Lebanese University is scheduled to get a new president. The University is not in very good financial shape and Amal and Hezbollah are reportedly vetting the candidates before the government is set to appoint the LU president.

Till next week, keep safe.