Made to feel “less than”

Femicide and violence against women in Lebanon surged against the background of changing gender roles in society during the economic crisis, Coronavirus lockdowns, and political paralysis that left room for more gun violence. Gender experts say that, unless there is a political will to name it, shame it and criminalize it, things are hardly going to change. 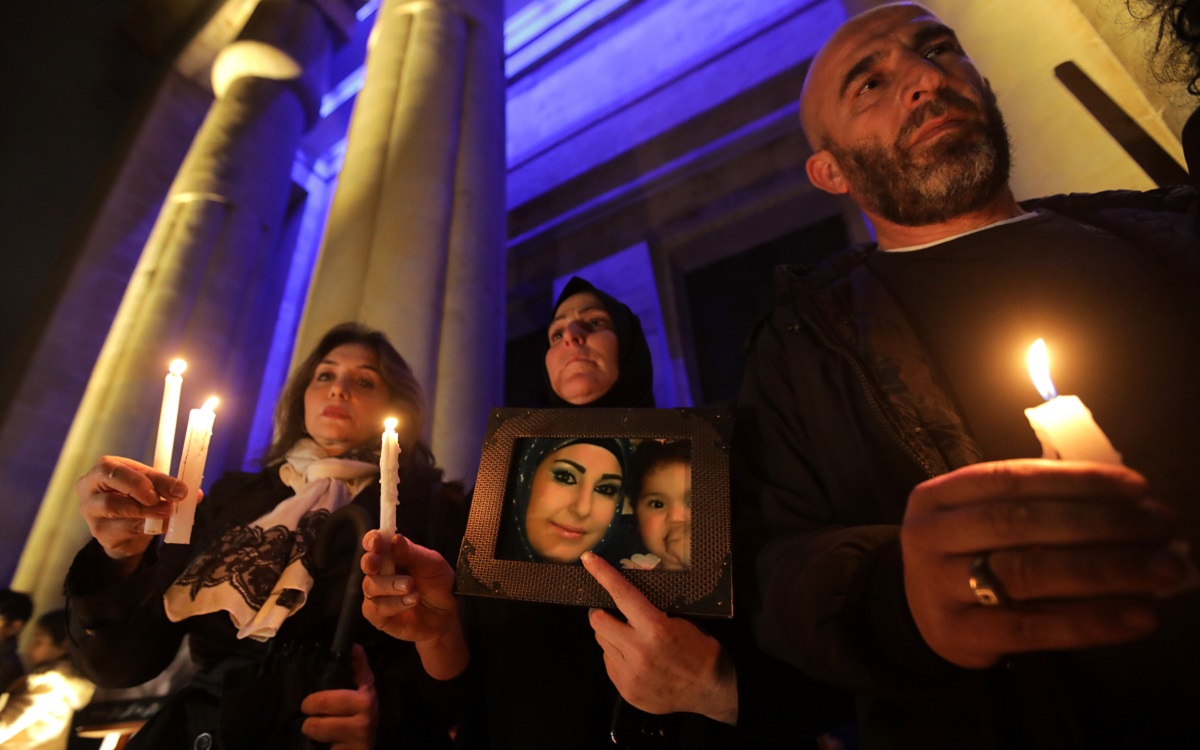 The decision-makers in the family, her husband, brothers, brother-in-law and a nephew told her they were finally agreeing to her request to get a divorce. She went to meet them and a sheikh to finalize the paperwork, as the sect-based civil law requires in Lebanon.

She was shot with a PKM machine gun. The fury of the 30 bullets shredded Alawa’s upper body to pieces, her legs almost completely detached from the torso, the forensic report read.

Alawa’s case is only the latest in a long series of honor killings and murders women have been falling victim to in the past two years.

Women have been shot, stabbed, strangled and even stoned to death by their own families, husbands or partners for decades in Lebanon. But since the country has been mired in layers of crisis  – Coronavirus lockdowns combined with a financial crash and a political paralysis that has weakened state institutions –  it has seen a resurgence in armed incidents, and an increase in murders together with the surge in general violence. Women, as is true the world over, being one of the most exposed and vulnerable groups in society.

In February, Lebanese model Zeina Kanjo was also found dead in her home in central Beirut. The local media reported that initial investigations found that her husband, Ibrahim Ghazal, whom she had married six months before, had killed her.

But, though high-profile cases like Kanjo’s receive public attention, many crimes remain unseen. Although on the rise, violence against women remains an under-reported phenomenon, despite efforts made by several human rights organizations to raise awareness on the matter.

The UNFPA reported in 2020 that 69 percent of gender-based violence (GBV) incidents were incidents of domestic violence.

During the first covid lockdown, KAFA, a Lebanese NGO that specializes in all forms of gender-based violence and exploitation, reported an increase in text messages and social media messages regarding abuse cases. The NGO estimated that the reason women felt safer texting rather than calling was due to the presence of the abuser in the same place as the victim for long periods of time.

Since the beginning of the lockdown in April 2020, Abaad, a human rights organization that advocates for gender equality and ending gender-based viilence in Lebanon, has observed a noticeable increase of calls on its helplines from women reporting domestic violence and abuse cases. This increase reached 200 percent. In the following months and to date, and with the economic crisis worsening, the numbers of calls have not dropped down.

The pandemic confined women to their houses and exposed them to the abuser for long periods of time, without them being able to leave, or see friends and family.

“Women found themselves with lesser protection options which is why they would resort to us and we would always keep their identities secretive as to avoid any dangerous repercussions she might face from her husband or her family,” Lama Jradi, supervisor of the psychological support programs at ABAAD, said.

Zina Sawaf, assistant professor of gender studies at the Lebanese American University, said that all classes and categories of women are victims of domestic violence due to systemic issues that criminalize the victims and empower the perpetrators.

For Sawaf, the main answer remains political: once there is a political will to name it, shame it and criminalize it, then change ensues.

“When women take up the position of the abused because the system labels it as such, then society would be more likely to support them and shame the abusers. You need a language, a vocabulary promoted by the politicians that the people could later on follow.”

Although the Lebanese Parliament passed a domestic violence Law on April 1, 2014, Human Rights Watch said that it fell short in key areas. It failed women at risk of marital rape and other types of abuse, usually protected by religious authorities.

The biggest flaw reported by HRW was that domestic violence was defined as “an act of omission, or threat of an act committed by any family member against one or more family members… related to one of the crimes stipulated in this law, and that results in killing, harming, or physical, psychological, sexual, or economic harm.”

“When women take up the position of the abused because the system labels it as such, then society would be more likely to support them and shame the abusers. You need a language, a vocabulary promoted by the politicians that the people could later on follow.”
Zina Sawaf, assistant professor of gender studies, LAU

Some of the crimes that the law identified were forced begging, prostitution, homicide, adultery, and the use of force or threats to obtain sex.

But marital rape was compromised in the final draft of the law due to pressure from religious authorities that referenced it as “marital right of intercourse”.

The law was also deemed ineffective in emergencies. The process of seeking orders from magistrates or courts or obtaining restraining orders can be lengthy and tedious for the victims that needed immediate protection.

“We have the issue of political pressures in this country. Anyone with connections to a specific party could get away with any crime so the laws won’t help in this case,” Mirshad said.

Femicide is almost always avoidable because it usually begins with the victim being subjected to domestic violence. However, often the abuse is not reported, and when it is reported it is not taken seriously by authorities, advocates say. In Kanjo’s case, for instance, she had reported the violence, but no one believed her or took her claims seriously.

“There was leaked information saying that when Kanjo went to the police to report on her husband’s abuse the officer’s reaction was to comment that her appearances did not match the image of an abuse victim,” said Hayat Mirshad, Co-founder and Co-director at Fe-Male, a feminist NGO.

Celine AlKek, support center coordinator and social worker at KAFA, which offers psychological, social, physical and legal support, explained that they had often cooperated with the ISF to follow up with the cases they were asked to assist with.

But the trouble remained on the legal side of things.

“Sometimes judges would not rule against the abuser to get him out of his house and we believe this is linked to a sort of male compassion in times of crisis,” AlKek explained. “They might consider the money he will have to spend on a new place and how the family will be affected financially with his absence.”

In a country ruled by a discriminatory judicial system, judges prioritized a man’s well-being over the consequences of his actions, she pointed out.

Jradi said among the reasons for the recent increase in domestic violence was that men have experienced a change in societal roles. With the lockdown and compounded crises, many found themselves amidst a household routine they were not equipped to respond to.

“Their primary roles as providers and workers were threatened. They felt like they were losing the provider and protective roles they maintained for a long time and suddenly women were taking on these roles,” Jradi said.

Jradi explained that men in MENA societies feel they have a strong image to maintain, and one way for them to do so in lieu of stripping of their power has been through violence. Using physical strength and weapons was a way to compensate for the feeling of weakness brought about during the economic collapse of the country.

“The common phrases used in our society that are passed on through the generations like “your house is your grave”, normalize abuse and push the woman to become more submissive.”
Celine AlKek, support center coordinator, KAFA

AlKek also explained that many women were compelled to take on more financial responsibilities during the crisis to ensure that their family was able to afford the resources needed to survive.

Alkek also agreed that society puts pressure on men to meet certain masculine expectations such as maintaining a certain salary, providing constantly for those around them, and protecting family members. The failure to achieve these requirements probably left some men incapable of healthy coping mechanisms.

That is why both ABAAD and KAFA find it essential to offer counseling for men, and not only for women.

AlKek explained that the language used in society related to violence against women makes it harder for people to see the abuse for what it is, and deem such violence as “normal everyday incidents”.

“The common phrases used in our society that are passed on through the generations like “your house is your grave”, normalize abuse and push the woman to become more submissive,” she stated.

Some women harbor inherited traditional ideas that empower the men’s position and provide them with more authority over women’s lives while making them feel weak and constantly dependent.

With abuse still considered taboo in many parts of society, many women also fear the tarnation of their and their family’s reputation, with victims sometimes treated as shameful and disgraceful. Many women hesitate to diverge from societal pressures, especially if other men in the family, such as brothers and fathers, pose a secondary danger.

Although anti-violence organizations work on empowering women through multiple psycho-social programs that introduce a more progressive societal programming, discriminatory laws and social norms still pose as obstructions to both justice and change.

“If inherited ideas already made a woman feel secondary to a man then imagine finding out that the law backed up these sexist notions and you were made to feel “less than” in all aspects of your life,” AlKek said.