As the financial crisis deepens and pharmacies remain closed, the Lebanese rely largely on their relatives in the diaspora to obtain vital medication. 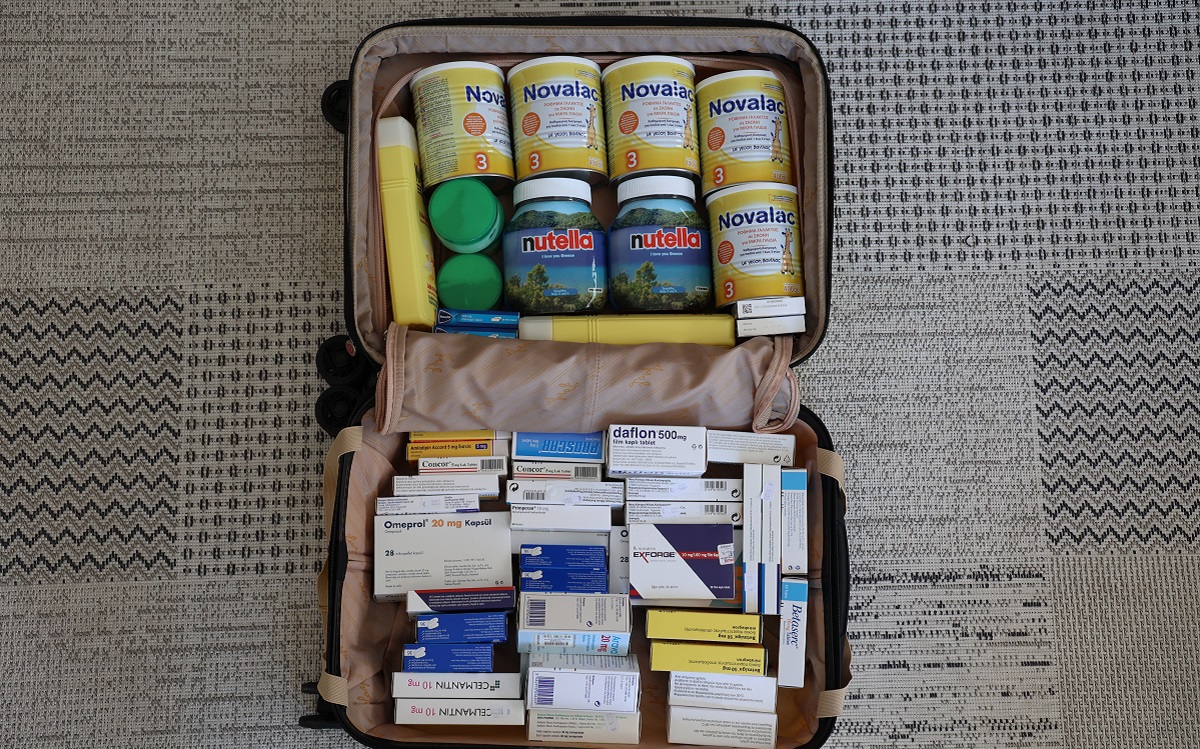 The suitcase of a Lebanese expat is packed with medicines and vital supplies ahead of travelling to Lebanon, in the Cypriot capital Nicosia on July 13, 2021. As pharmacies run out of hundreds of medicines, including over-the-counter painkillers, the suitcase of a Lebanese expat, once teeming with gifts and duty-free purchases, now resembles a portable pharmacy. Photo: Christina Assi, AFP.

The lives of Peggy Bedoyian and other Lebanese expats living in Los Angeles, California now revolve around one thing: medicine – how to get it and how to deliver it to Lebanon.

“This is all we talk about over breakfast, lunch, and dinner. Our minds are constantly preoccupied with how to provide money and who is soon going to Lebanon.”

Bedoyian and some of her friends founded in 2019 Califorleb, an Instagram page meant to help raise funds and send food boxes to those in need. But in the summer of 2021, their direct messages flooded with medicine requests from Lebanon.

A lack of foreign currency in Lebanon has made it difficult for importers to pay foreign medical suppliers, which resulted in a severe shortage of medication in many hospitals, pharmacies and healthcare institutions. The association of Lebanese medicine importers reported a debt of $600m to international suppliers.

The medicine crisis prompted Lebanese living abroad and returning to Lebanon this summer to fill up their suitcases with medicines, sanitary pads and baby milk formula. Every expat arriving at Rafik Hariri International Airport in Beirut carries that suitcase. Some airlines, such as AirFrance, even announced they allowed extra luggage for anyone who traveled to Beirut.

“We suddenly found ourselves, with our full days and 8 to 5 jobs, in a sea of requests we can’t say no to,” she explained. “Here in the US, it’s hard to get drugs without a prescription so we can only send the basics like Advil and Panadol. But then we had to expand our work because we felt like this wasn’t enough so we started paying for medicines to be sent from different countries straight to Lebanon,” Bedoyian stated.

The Califorleb team would first fundraise in the US, and then they would use the funds to buy medicines in Turkey, and lastly, a volunteer would transfer suitcases of medicine to Lebanon.

Many other social media based initiatives, including Livelovebeirut, have done the same, while Lebanon based NGOs, such as Basecamp and Baytna Baytak, collected donations from individuals arriving in Lebanon and redistributed medicine to those in need.

A shortage of cancer medication

Lebanese healthcare workers have warned for months of declining stocks of vital medical supplies. Despite having some medicines subsidized still, importing them has become increasingly difficult because foreign agents would need dollar payments, which the central bank was not able to provide.

The Barbara Nassar Association for Cancer Patient Support, an NGO that provides aid to adult patients, organized a sit-in on August 23, with an online campaign titled ” we want cancer treatment.”  Its founder and director Hani Nassar said that the state is “currently massacring” cancer patients in the country.

He explained that specific types of cancers could be controlled within a few months if the patient started treatment right away, but several thousand people have been forced to stop their treatments for lack of proper medication.

The protest also reportedly pushed the health ministry and the central bank to start the necessary paperwork to help companies provide cancer medication, the founder stated. But he believes it is all talk.

“We’ve had enough promises in the past, we want the medication in our hands.”

The organization has put its efforts into online fundraisers. But Nasser explained that what was needed was a sustainable plan.

“Singular, individual contributions are not sustainable in the long run,” he said.

For now, he pointed out, the only plan is to gather a long list of the supplies they lack and send it abroad to whoever could help.

Bedoyian said she has indeed been receiving more requests for cancer medication, but the issue of prescription makes such medications difficult to procure all over the world.

“We found a website that helped us secure a prescription for one medicine we got from France and the cost was $2600,” she stated.

Because cancer medication is expensive, expats needed to double their efforts to gather the funds.

“We used to get together for a party and raise $2000-$3000 but no one is in the mood to party anymore so we’re being creative and coming up with new types of events to keep the donations coming,” Bedoyian explained.

The page is organizing a yoga event on September 12 and is planning for more athletic-based events in the future.

The fundraising efforts were divided between individuals and NGOs. The team abroad collaborated with specific NGOs and volunteers that distributed medicine all over Lebanon.

She also mentioned that second-generation American Lebanese were now contributing by buying bulks of medicines and giving away their suitcases to be used for transporting the medicine.

“This is all we talk about over breakfast, lunch, and dinner. Our minds are constantly preoccupied with how to provide money and who is soon going to Lebanon.”
Peggy Bedoyian, founder of Califorleb.

As of late, however, it has become more difficult to gather enough funds as many people have stopped contributing as much as in the beginning of the crisis, and the budget for the page fundraisers has diminished.

“The first thing we do when we get our paychecks is to divide it into the cash money we’re going to send our families back home, our bills and the amount we can donate to the page,” Bedoyian explained.

And sometimes, black market traders would try to take advantage of the situation.

“I’m getting demands from fake accounts that say they have the medication for a higher price than its original and when I ask about their identity, the account disappears,” Bedoyian said.

She says that negotiating with traders on the black market has proven to be a frustrating matter that often brings her to tears.

“Even if black market sellers tell you the price of the cancer medicine was one thousand dollars, double its actual price, but you have a cancer patient who told you she can’t sleep at night because of her pain, how can we sleep at night knowing there is someone suffering like that? You feel like you’d do anything to get her the medicine,” she said.

Bedoyian says that despite facing many challenges, she has been able to maintain positivity by recognising how cooperative the community was. But if local NGOs in collaboration with the Lebanese diaspora are taking on the role of the state by providing people with a few free medical services and more access to medication, people in Lebanon have limited options.

Getting medicine in Lebanon

Lebanonneeds, an NGO founded at the beginning of the crisis in 2019, used to provide free medical consultations until the crisis deepened.

“We found ourselves filling a role we weren’t ready for,” said Nour Najem, 34, cofounder.

Following the Akkar blast on August 15, when a confiscated fuel tank exploded and killed at least 33 people and left many injured, the NGO rushed to provide medical aid and long-term treatment plans for the injured.

But it’s not just disaster victims that require help. The problem, she says, is that everyone needs help and they need it desperately.

“Cancer patients can’t wait, they need their treatments to survive. If you deprive them of their treatments, it is like you gave them a death sentence.”
Hani Nassar, director of Barbara Nassar Association for Cancer Patient Support.

“We give them whatever we have because we can’t say “no” even if that means our stocks would run out faster,” Najem stated.

The NGO received individual medical donations from abroad, but this was not enough to ensure a long-lasting stock.

“We’re talking to foreign supply companies and we’re trying to see if we can come up with a plan to help local pharmaceutical producers with future production,” she added.

However, the issue of importing expensive raw material and selling the final product at a subsidized price means a loss for the local producers.

So, the only option that remains is to buy the medicine itself directly from abroad.

Some seek ways to get this done faster.

Ahmad Khodor, a Syrian employee at a pharmacy in Istanbul, now has a second job – to help transfer Turkish medicines into Lebanon.

Khodor, who has been living in Istanbul for six years, said that for him, this was a form of charity work.

“I only charge the price of the medicine itself (the producer price). I get the order through Whatsapp and then I find someone who is leaving for Lebanon soon,” Khodor stated.

He recounted that the number of orders has grown exponentially within the last months. Whereas at first he would receive two to five orders a day, he currently gets around 130 orders per day.

Even if for him this is an act of kindness, others did not share the same intentions. Khodor said that there were many traders who were making big profits out of the make-shift medicine trade by adding shipping fees of one to three dollars.

“If the medicine here cost about $2, some traders would sell it for $7,” he stated.

Luckily, travel between Turkey and Lebanon is frequent, and Khodor has been able to send many boxes of medicine at once.  He is also considering connecting with groups that schedule their flights regularly, that way he would be able to send multiple boxes with several people on one plane.

Faced with pharmacies shutting down and shortages of vital medication, the Minister of Health Hamad Hassan and security forces started raiding storage facilities and reported stockpiles of meds.

On Monday August 20, Hassan raided a medicine warehouse in south Lebanon where the owner had stockpiled subsidized medicines. The depots contained medicine that could treat patients with coronavirus (COVID-19), blood pressure, and respiratory problems, antibiotics, and thousands of infant formula.

Another raid was carried out in a warehouse in Tallet El Khayat, a neighborhood of Beirut.

“During the raid, we found 6800 pills of medicine no longer available at hospitals, and which were urgently needed after the Tleil explosion,” Hasan said,  calling on the judiciary to “take measures to deter people and institutions that monopolize medicines.”

Hasan also warned pharmacies and importers that more raids would take place. The owners of the storage facilities said that the medicine was expired and was stored because it could not be sold anymore and also because disposing of it was a complicated process.

But raids are hardly enough to solve the problem of medicine shortages. The responsibility of supplying medicine remains, to a large extent, on the Lebanese living abroad.

And that responsibility weighs heavy on them, Bedoyian said. She says most Lebanese she knows feel drained wherever they are, and the suffering happening in their home country follows them across continents. They live in a state of either worry or guilt, Bedoyian described.

“Everyday we wake up and keep up with what’s happening on social media and it seems it’s one bad case after another. We can’t believe this is our country anymore. We feel so heartbroken and angry, we are no longer in the mood to enjoy our lives and have fun,” she stated. “We’re just exhausted but we’re going to remain creative with our future events to keep the money coming,” Bedoyian added.