Not just a pretty face

Farrah Akbik looks at the hypocrisy of the western, and particularly French, obsession with the hijab. 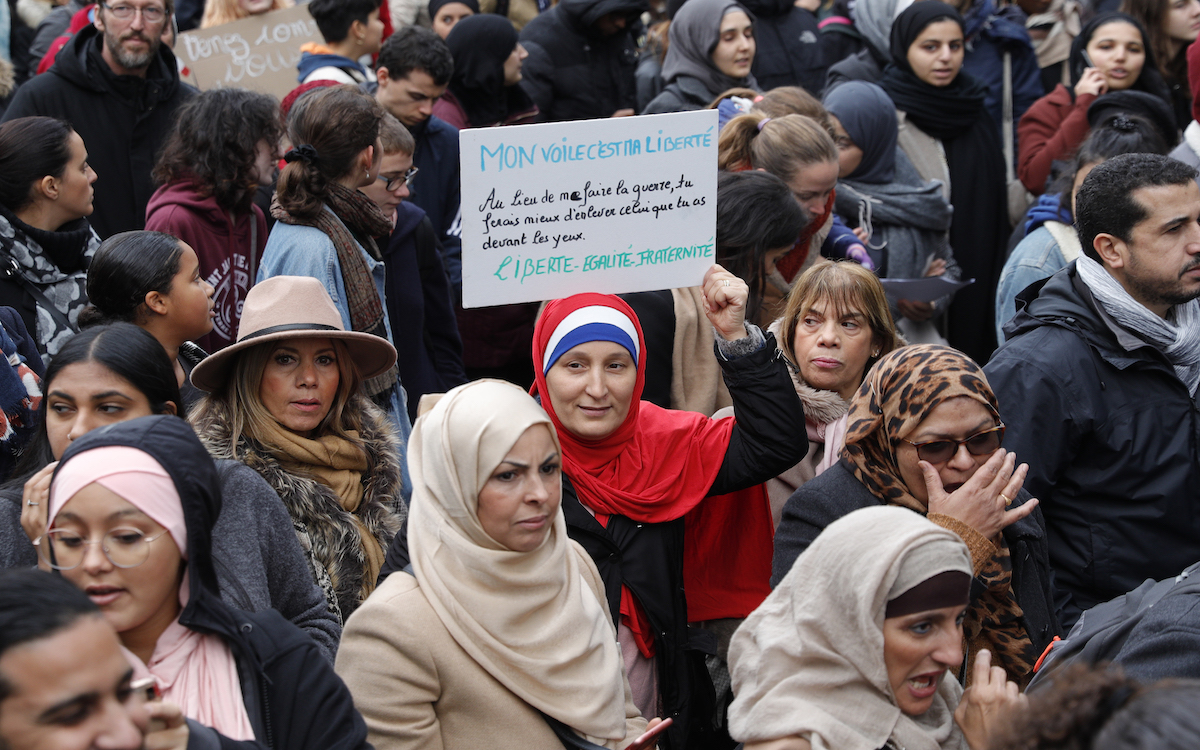 A woman holds a placard reading "my veil is my freedom" as she takes part in a demonstration march near the Gare du Nord, in Paris to protest against Islamophobia, on November 10, 2019. Photo: Geoffroy Van Der Hasselt, AFP

Scrolling down on my social media feed, I came across an article in the Economist. I didn’t take offense to the title, ‘Why nations that fail women fail,’ and, in fact, I agreed with it. The photo, however, was predictably stereotypical and gave a good indication as to what direction the article would move towards.

It made for grim reading, lots of unpalatable statistics and so forth. It is universally agreed that the Taliban is a monstrosity, but it doesn’t represent Islam, and it certainly doesn’t represent the position of women in Islam.

Yet, these articles, more often than not, omit this, and serve very well in oiling the stereotypical wheel… the subjugation of women… the unspoken inference that all Muslim women are oppressed.

The article quoted Hilary Clinton as having said that “the subjugation of women is…a threat to the common security of the world.” The Economist would supervene with the underlined “societies that oppress women are far more likely to be violent and unstable.” Click on it and you are taken to another article that has a photo of young Muslim school girls wearing hijabs.

Secularism and its obsession with the veiled Muslim female form. The last unchartered realm maybe?

Why not talk about the opposite end of the spectrum?

What many may see as also a form of the subjugation of women by modern western culture, in a climate that normalizes the sexualization of women across several domains. Where more and more young girls are growing up with an ill-placed notion of their value being tied into their beauty.  Where it’s not uncommon to see women as young as 16 years posting photos of themselves in their lingerie on social media platforms.

When you have influencers and famous people lauding the benefits of tapping into your sexual self as a means of advancement, then you know that an entire generation of women have been exposed to an alarming new norm and conditioned into thinking that sexualization equates to “liberation.”

In a time where having a “leaked” sex tape is far more profitable than a PhD. Music videos in the majority of instances are sexualized to some extent, with some having lyrics that encourage violence and refer to women in a derogatory fashion.

Where balancing a champagne glass on your posterior “breaks the internet.” In a culture where posting nudes is described by some as empowering and liberating, as illustrated by the disturbing rise of OnlyFans and the normalization of selling explicit material.

When you have influencers and famous people lauding the benefits of tapping into your sexual self as a means of advancement, then you know that an entire generation of women have been exposed to an alarming new norm and conditioned into thinking that sexualization equates to “liberation.”

“There must be a space where women can still be sexual when they choose to be,” says Emily Ratajkowski.  The woman that found fame writhing around in nothing but her underpants on the infamous Robin Thicke video, Blurred Lines. To lyrics that were blasted for being misogynistic and condoning rape. By the artist who she subsequently later accused of sexually assaulting her during filming.

A woman that has since fashioned herself into a modern-day feminist that condones the commodification of the female form and lauds her success in taking back control of a body that ultimately was abused and given over as public property.

So why the continuous attack on veiled Muslim women?

Think back to the image of the Muslim woman sitting on a beach in Nice in 2016.

Surrounded by three armed policemen, she was forced to disrobe under the guise of the abhorrent burkini ban. An image that sparked outrage across the internet. France has banned Muslim girls from wearing the headscarf at school, and ultimately not only affected the education of the women that have refused to adhere to the ban, but has also stunted their future employability.

There are now calls to ban girls under the age of 18 years from wearing the veil in public and banning mothers from wearing it on their children’s school trips. Is not forcing women to abandon their religious identity and adhere to western dress codes a form of oppression and a contravention of their human rights?

Article 18 of the ICCPR clearly stipulates, “everyone shall have the right to freedom of thought, conscience and religion. This right shall include freedom to have or to adopt a religion or belief of his choice, and freedom, either individually or in community with others and in public or private, to manifest his religion or belief in worship, observance, practice and teaching.”

The French have long been obsessed with the veil. It is an obsession that dates back to the days of colonialism in the Middle East and North Africa, especially Algeria, where France has a bloody past of genocide and cultural eradication.  Muslim Algerian citizens were not entitled to French citizenship unless they gave up their religious identities in favor of a French one.

“This belief manifested itself drastically in the attitude toward Algerian Muslim women, who were seen as oppressed and exotic,” Cady Lang wrote in a 2021 Time article.

So why the preoccupation with the female form, and more so with the ones that cannot be seen?

Muslim women have long shaken off the stereotypes of being “oppressed and exotic” subjects in need of liberating.  Whether we dress in a “modern” fashion or modestly, the majority of us are free to choose which.

Women are slowly taking back ownership of their bodies, as was demonstrated by female athletes at the Tokyo Olympics. For years a stage where women’s bodies were scrutinized more for their appearance rather than their athletic prowess.

The German women’s gymnastics team famously chose to perform their routines wearing full-length body attire, instead of the traditional scant leotards. The Norwegian women’s beach handball team opted for elasticated shorts rather than bikinis and were fined for their choice.

The message seems to be a resounding one to all women, Western or Eastern. Cover up and you are oppressed, undress and you are liberated.

Muslim women have long shaken off the stereotypes of being “oppressed and exotic” subjects in need of liberating.  Whether we dress in a “modern” fashion or modestly, the majority of us are free to choose which.

Prohibiting women from having the choice to dress modestly is one and the same as the Taliban forcing women to veil. And if societies that oppress women are deemed more likely to be violent, then it explains perfectly why according to the IEP, after Uganda, the USA is ranked as the 2nd worst country for external conflict, as reported by the Independent. A nation that has had military involvement in one form or another for 92% of the time since its formation.

To deliberately misquote Ratajkowski by changing one word…

The female mind is a beautiful thing, and it should be embraced and celebrated.

Farrah Akbik is a British-Syrian writer who writes to raise awareness of issues pertinent to the Levant. She is currently doing her Masters in Creative Writing in London.