Though more political losses and humanitarian strife is inevitable in Ukraine, Putin’s brute movements are bound to falter, and his power to fade, writes Ronnie Chatah. 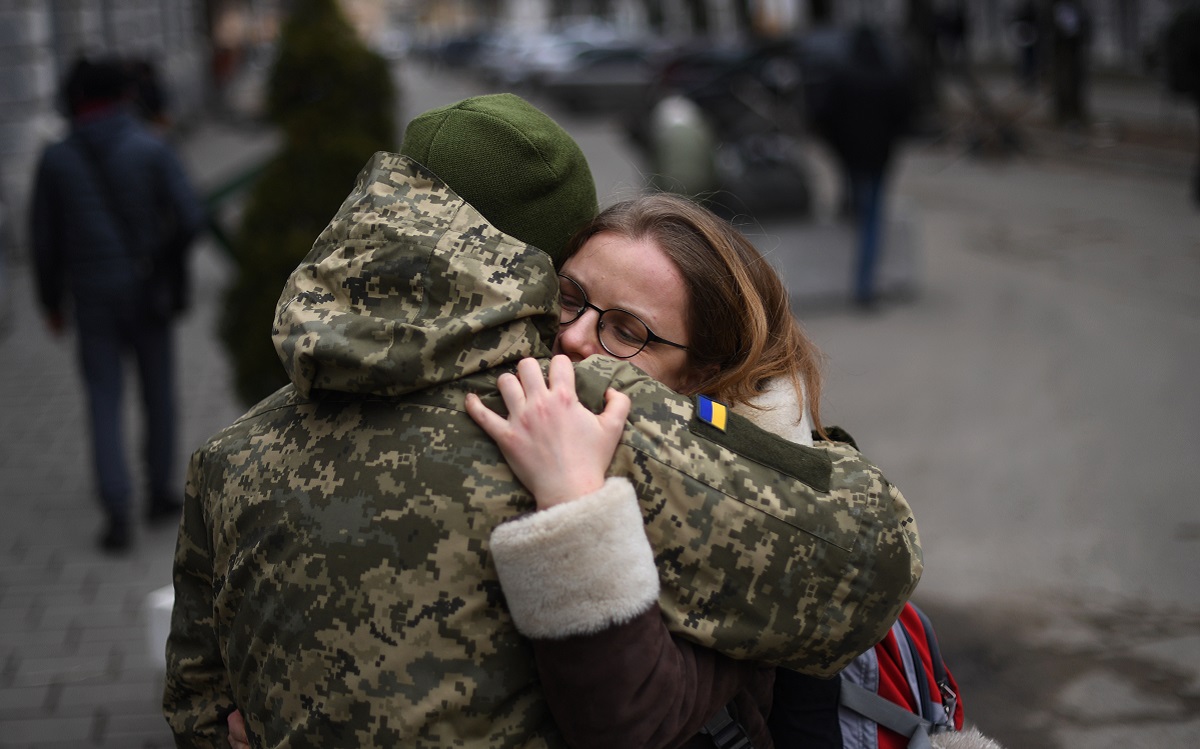 An Ukrainian soldier hugs his partner next to a military base where residents are queuing to join the army, in Lviv on March 2, 2022. Photo by Daniel Leal, AFP.

Like Syrians before, against all odds and under Russia’s bombs, Ukrainians are defending their homes, their cities and their country’s independence from invasion and takeover. The siege of Kyiv has begun, with regime change to Vladimir Putin’s liking a stated goal, and a further partitioning of borders along with a concocted civil war.

Citizens, ordinary and brave, are first to pay the price. Making sure resistance is defined correctly, and not by an opposing proxy-led adventure better suited to external endeavors.

One million Ukrainians have fled. Their departure may not be definite, but many will join the millions of Syrians who have yet to return home.

And as heroism gradually loses ground to violence, an individual has shown us that leadership still matters, especially during a nation’s darkest hour.

Volodymyr Zelenskyy is an unusual president. A comedic actor and satirist-turned-politician, and in Ukraine’s difficult reconciliation with the Holocaust’s decimation of continental Jewry, a Jewish man, himself. Young – 44 years of age – and most importantly refusing American refuge. Instead, standing alongside those who voted him in, and those who never trusted him.

In combat uniform and in a bunker. In unison with his countrymen that know that in days, if not hours, their battle will be lost.

Their war for freedom is ongoing. From a Cold War that saw their fate tied to Russia (not just in sphere but within the Soviet Union’s once larger borders) to an independence in 1991 now under attack. Theirs is the long struggle ahead. Shared by our part of the world, with Iran’s military survivability dependent on an external army, setting up proxy bases in Lebanon, Syria, Iraq and Yemen and willing to negotiate nuclear technology in Switzerland and Austria.

But unwilling to discuss their red line: regional security, on their terms.

Yet the fortune (and misfortune) for future generations is that a chokehold initially suffocates, and when it persists, leads to death. The damage these misadventures take leads to indefinite chaos and uncertainty. Failed states are not what these unstable regional players look for. They hijack sovereign institutions, eliminate opponents and paralyze reform, but their goal is neither annexation-like responsibility nor ungovernability.

Their focus is security

In our own case, looking back to what ended our civil war, a 1989 Taif Agreement ratified by the Lebanese parliament on November 5 that year was administered by Syria’s occupying forces. It was followed by president René Mouawad’s assassination on November 22 – our independence day. Army commander and general (and prime minister) Michel Aoun abandoned Baabda less than a year later on October 13, 1990 (how comedic our commander-in-chief fled in his pajamas while Ukraine’s comedian-in-chief commands with courage and charisma). And a steady dismantlement of two key stipulations from Taif began: Syrian forces would no longer exit Lebanon, and one sub-state militia would avoid disarmament.

Any gains made by hijacking Ukraine and forcing Kyiv to adhere to Moscow’s security dictates will be short-lived and destined to falter. A proud population will inevitably rise once more. Beirut has proven that path forward.

And in 1991, bilateral agreement took hold that solidified Syria’s role as conflict creator and resolver while garnering international acceptance and even favor – ‘The Treaty of Brotherhood, Cooperation and Coordination’ that saw Lebanon’s sovereignty dismantled, and our security matters fall into the hands of Assad’s henchmen and local allies, ensuring Lebanon remained a permanent battlefield and warzone.

So long as the Israelis were in the south, Syria justified its presence and Hezbollah held its legitimacy. When the Israelis departed in 2000, Syria handed the Golan Heights’ Shebaa Farms to Lebanon. After the Syrians quit in 2005, Hezbollah pointed its weapons inwards. And once Assad was on the brink, Hezbollah fought in Syria.

The aftermath of Rafik Hariri’s assassination meant the roles played by Syria and Iran in Lebanon were reversed. And our demands for independence in 2005 were derailed.

Heading north, through time, the security configuration the Soviet Union depended on for longevity lasted over four decades. And then an event in 1986 that no one could hide hastened the USSR’s internal demise. An accident – and the world’s largest nuclear disaster – in Chernobyl’s nuclear power plant, with radioactive contamination spreading into neighboring Belarus, and resulting in over 4,000 radiation-related fatalities in Ukraine and Belarus, alone.

At a later date, and perhaps in hindsight, Beirut’s port blast – the largest non-nuclear blast in modern history – may become the marker that turned the tide.

Putin is hellbent on reasserting a Soviet-like scenario. Albeit constrained to 21st century borders and without a once-impenetrable Iron Wall, he may well succeed in the short term. Despite concerted and robust Western diplomatic posturing against the Kremlin in recent days (including defense weapon supplies to Ukraine’s military, removing Russia in large scale from the SWIFT banking system and sanctions that are already damaging Russia’s economy) there is no threat of direct confrontation with Russia. Foreign troops have not been sent to stand alongside Ukrainian forces. And there is no desire for an armed entanglement that would invite other countries into this war.

Dismiss any fears of a Third World War, at least for now

Goodwill gestures, including a formal acceptance of Ukraine’s application into the European Union, will do little, if anything, to scale back Russia’s military advance. But when the longer view is taken (and when the speed of instant communication and social media hysteria is measured alongside the slower and resigned tide of tyranny’s decline) we are witnessing the gradual erosion of Putin’s sway.

Cracks are appearing. Resentment to his rule from within Russia has been growing for years: the multitude of political assassinations and suicides, successful and unsuccessful poisonings abroad, and imprisonments against former allies and opponents over the past two decades exposes an unstable and thuggish-like regime that is desperate to usurp full control.

And within his loyal orbit, it is unclear whether Putin’s security advisors welcomed this unprovoked invasion. That we all witnessed his security chief stumble for discretion and caution in face of Putin’s notorious and scolding interruptions hints at a dissent that is building near the top.

Change happened quickly in central and eastern Europe in late November 1989. The Cold War was over, but Mikhail Gorbachev that sought to limit Chernobyl’s fallout was the same Soviet leader that refused military intervention when Berlin’s Wall began to fall.

Any gains made by hijacking Ukraine and forcing Kyiv to adhere to Moscow’s security dictates will be short-lived and destined to falter. A proud population will inevitably rise once more.

Beirut has proven that path forward.

And if Zelenskyy surprises us by succumbing to Putin’s rules, he will be rendered useless, like Bashar al Assad in Syria today, ruling a paralyzed Ukraine into a partnership that distorts sovereignty into subsidiary, disfigurement and dependency.

I highly doubt Zelenskyy will follow that path. Should he flee, his current flame will flicker and fade with ouster.

And if he stays in Kyiv, in full defiance with his administration’s least breath, he will be imprisoned into isolation.

On the other end of history, Putin’s Russia will cease. As will IRGC rule over Iran. We will celebrate those that stood up to tyranny across Ukraine, Syria and Lebanon. And we will toss to the dustbin those that surrendered their dignity to stay in power.