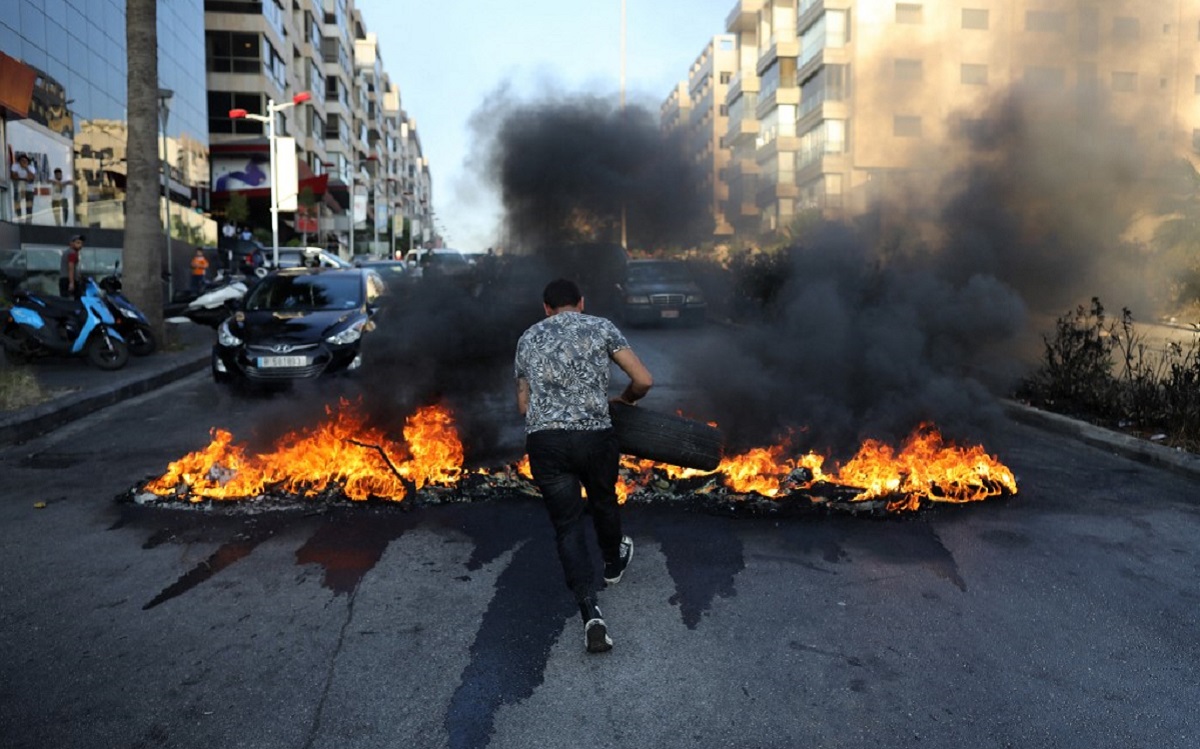 Add to cart Print Share this document A Lebanese man sets tires on fire during a protest at a main road in Lebanon's capital Beirut against dire living conditions amidst the ongoing economical and political crisis, on June 28, 2021. Photo: Marwan Tahtah.

Protests continued on Tuesday in several regions of Lebanon, as the government hiked fuel prices by more than 30 percent as it reduced subsidies that have eaten away at the central bank’s foreign currency reserves amid a painful economic crisis.

Petrol and diesel prices went up sharply, according to a revised price list published by the official National News Agency (NNA), in a week when a steep currency devaluation sparked angry street protests.

Several roads, including the highway that links Beirut to South Lebanon, were cut off by angry motorists. A gas station in Muhammarah, North Lebanon was attacked and damaged by angry protesters during the night of Monday to Tuesday, according to the NNA.

The sharp fuel price rises came as Lebanon, a small country of six million people, grapples with an economic crisis branded by the World Bank as one of the world’s worst since the mid-19th century.

The Lebanese pound — which has been pegged to the dollar at 1,507 since 1997 — sold for more than 17,000 to the greenback on the black market this week, a record low, AFP reported.

The new prices came after weeks of long queues at petrol stations that had started rationing gasoline and diesel fuel amid shortages.

Fuel importers blamed the crisis on a delay by the central bank in opening credit lines to fund fuel imports due to depletion of foreign currency reserves.

For their part, Lebanese officials said smuggling to Syria and stockpiling by fuel distributors had contributed to shortages.

The central bank used to fund 85 percent of fuel imports at the official exchange rate of 1,507 Lebanese pounds to the dollar while importers fund the rest of the cost at the street rate.

But the government last week authorized the funding of fuel imports at the weaker exchange rate of 3,900 Lebanese pounds to the dollar instead of the official peg to ease the crisis.

The central bank Monday said it would open credit lines for fuel imports based on the new exchange rate in compliance with the government’s decision.

Following the central bank announcement, the energy ministry said that fuel tankers docked in Lebanese waters had started offloading fuel shipments that would boost supply in the coming days.

Fadi Abu Shakra of the union of fuel distributors told NNA on Tuesday that six tankers had started offloading shipments and they would soon be distributed to gas stations across the country.

Demonstrations against the hike in prices

Protesters blocked roads across Lebanon on Monday over a deepening economic downturn that has led to a fuel crisis and severe power shortages.

The demonstrations came ahead of hikes in the price of fuel that the energy ministry said it would issue on Tuesday morning.

They also came as power cuts resulting from fuel shortages caused disruptions at a main Beirut hospital and at a security force headquarters in the capital, according to local media reports.

AFP reported on Monday night that protesters blocked major roads and burned tires and garbage bins in Beirut, while the official National News Agency said roadways north and southeast of the capital were also blocked.

Protesters in the south Lebanon city of Nabatiyeh parked vehicles across a main artery to stop traffic, the NNA said.

The demonstrations took place after weekend scuffles between security forces and protesters that left nearly 20 people wounded in the northern city of Tripoli following a plunge in the value of the Lebanese pound.