The economic crisis has severely depleted the LAF’s resources, allowing Hezbollah to continue, and even strengthen, their breach of Lebanon’s sovereignty. 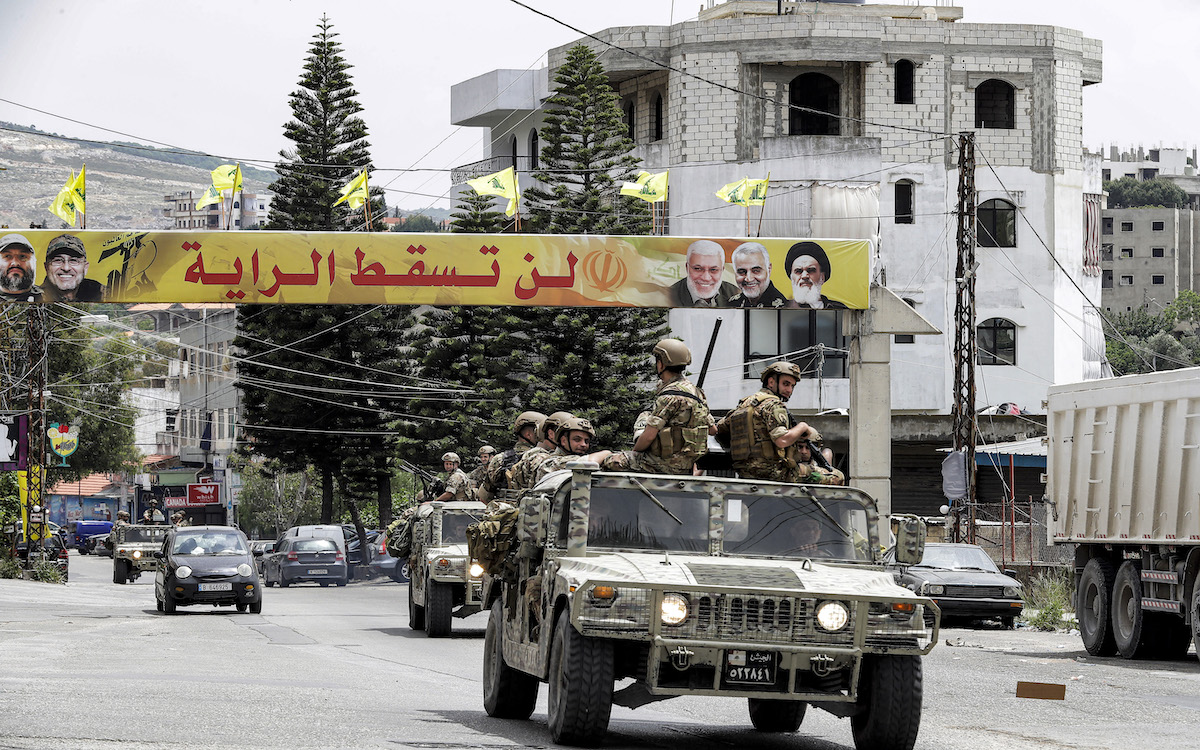 Lebanese army vehicles drive past a banner for the Lebanese Shiite Muslim movement Hezbollah with text in Arabic reading "the flag will not fall" and showing the faces of the late (R to L) Islamic Republic of Iran's founder Imam Ayatollah Ruhollah Khomeini, the head of Iran's Islamic Revolutionary Guard Corps (IRGC)'s "Quds Force" Qasem Soleimani, the head of Iraq's Hashed Shaabi (Popular Mobilisation Forces) Abu Mahdi al-Muhandis, and Hezbollah commanders Mustafa Badreddine and Imad Mughniyeh; along a road while on patrol in the southern city of Nabatiyeh, on May 15, 2022 during the national parliamentary elections. Iran's Imam Khomeini died of natural causes in Tehran in 1989. Soleimani and al-Muhandis were assassinated together in early 2020 by a targeted US drone strike near Iraq's Baghdad International Airport. Badreddine was killed by an explosion in 2016 near Syria's Damascus International Airport. Mughniyeh as assassinated in a car bomb explosion in 2008 in Syria's capital Damascus. Photo: Mahmoud Zayyat, AFP

Lebanon’s national security forces and army are in need of modernization if they are to reassert themselves as the sole defender of the Lebanese people. Unfortunately, this has failed in many instances, as Hezbollah, an Iranian-backed political party with its own military wing continues to strengthen in both weapons and personnel. This is partly thanks to Tehran’s consistent supply of material support for its Shite ally in Lebanon.

The Lebanese Armed Forces (LAF) does not always receive the same level of treatment from its allies, which has led to a decrease in morale amongst its recruits.

Over the years, at least from the start of Lebanon’s financial crisis, when the Lebanese (pound) began devaluating, thus losing its purchasing power, the government has failed to provide adequate financial compensation for the men and women who serve in defense of their country.

It is estimated that the lira deteriorated to 90 percent less than it was worth prior to the crisis. Lebanon’s head of the army, Commander General Joseph Aoun, mourned the present state of Lebanese security institutions. In June 2021, he issued a dire statement at a press conference. If unmitigated, the economic and financial crisis will inevitably lead to the collapse of all state institutions, including the LAF — “the backbone of the country.”

The United States, historically the LAF’s strongest backer, had agreed to fill in the loss to help prevent a total collapse of the country’s security institutions.

In the latest development, the US approved two separate funds to assist Lebanon’s army and Internal Security Forces (ISF). The aid was set up to secure the means for soldiers, as one official said, “to put food on the table.” This was first reported by Saudi’s Al-Arabiya and the estimated worth of the aid was $67 million for six months.

This is a good start for the longer strategy of advancing the LAF’s capabilities to the next level, but it will require a transformational change in the relationship between Lebanon and the US.

This round of financial provision, paid for by the American taxpayer, is not charity and should never be seen as such. It is an investment in Lebanon’s top institution, which is an insurer of internal stability. Indeed, whenever a domestic problem of a political nature or incidents of violence erupt in Lebanon, it is the LAF that is called upon to put an end to it.

For example, when clashes broke out between supporters of Hezbollah and the Christian Lebanese Forces party in the Tayyouneh neighborhood of Beirut, the LAF quickly mobilized and stopped the bloodshed that left seven dead.

The incident was reminiscent of the dark days of Lebanon’s fifteen-year civil war, when the army had deteriorated and split on sectarian lines.

That moment in Lebanon’s history is proof that what is truly needed is a strong central army with completely secular and patriotic values. The best way to accomplish this is for the LAF to be better equipped with higher-grade weapons, not dissimilar to what America provides its regional allies, like Egypt and Saudi Arabia.

Since 2006, the US has invested more than $2.5 billion to improve the LAF’s defensive capabilities, but only to protect Lebanon from non-state actors. It has yet to offer Lebanon any material assistance to stand up against Israeli violations or threats to the Lebanese people.

This gives Hezbollah the pretext to keep its arms, arguing Lebanon has no alternative that can protect them appropriately. The US also provides Hezbollah with an alibi to maintain its narrative of resistance by not using its influence over Tel Aviv to stop all Israeli violations of Lebanese sovereignty.

For years, the US has favored Israel’s “right to defend itself” while putting a ceiling on what the LAF was entitled to when exercising self-defense with delivered weapons.

At one point, the US cut off aid to the LAF out of fear it was under the sway of Hezbollah when it rejected the condition the weapons could not be used against Israel. Normal relations between the LAF and the US resumed quickly.

Nevertheless, the limitations on the LAF have shown not to be without dangerous consequences.

In the wake of the recent parliamentary election which saw Hezbollah and its allies lose their majority in parliament, the US should make a new defense agreement with the LAF built on specific principles.

The first should be the guarantee of preserving Lebanon’s sovereignty, ensuring that it is not used as a platform or proxy for regional conflicts.

The LAF’s top priority should be to demand that Hezbollah act in accordance with what Lebanon’s military intercepts see as defensive strategic necessities, and not make arbitrary decisions that could spark a conflict.

Second, the United States must be willing to supply the Lebanese army with not only financial aid for individual soldiers, but advanced weapons to bring its capabilities up to twenty-first century standards. The LAF has proven itself to be a responsible actor, with only the desire to defend Lebanon and not to trigger a war.

And finally, it is in Washington’s interest to demand that Israel stop violating Lebanon’s airspace and sovereignty to help reduce tensions between the two sides.

Now is the opportunity for America to act on the momentum that has started in Lebanon to help put it back on the path of true independence, where its people, government, and army are one. If it chooses to look the other way and maintain the status quo, Hezbollah will have the pretext to keep its arms, arguing Lebanon has no alternative that can protect it.

Hopefully, a new policy along the following lines will be adopted soon.

If the world wants to see Hezbollah disarmed, it should first start by disarming its narrative as the most capable defender of Lebanon

Adnan Nasser is a foreign policy analyst and journalist with a focus on Middle East politics and relations. He tweets @Adnansoutlook29.