Most of the heritage buildings affected by the Beirut port blast are sustained more than a year later, resuscitating the cultural and social fabric. Yet, inadequate funding threatens the rehabilitation of remaining historical establishments. 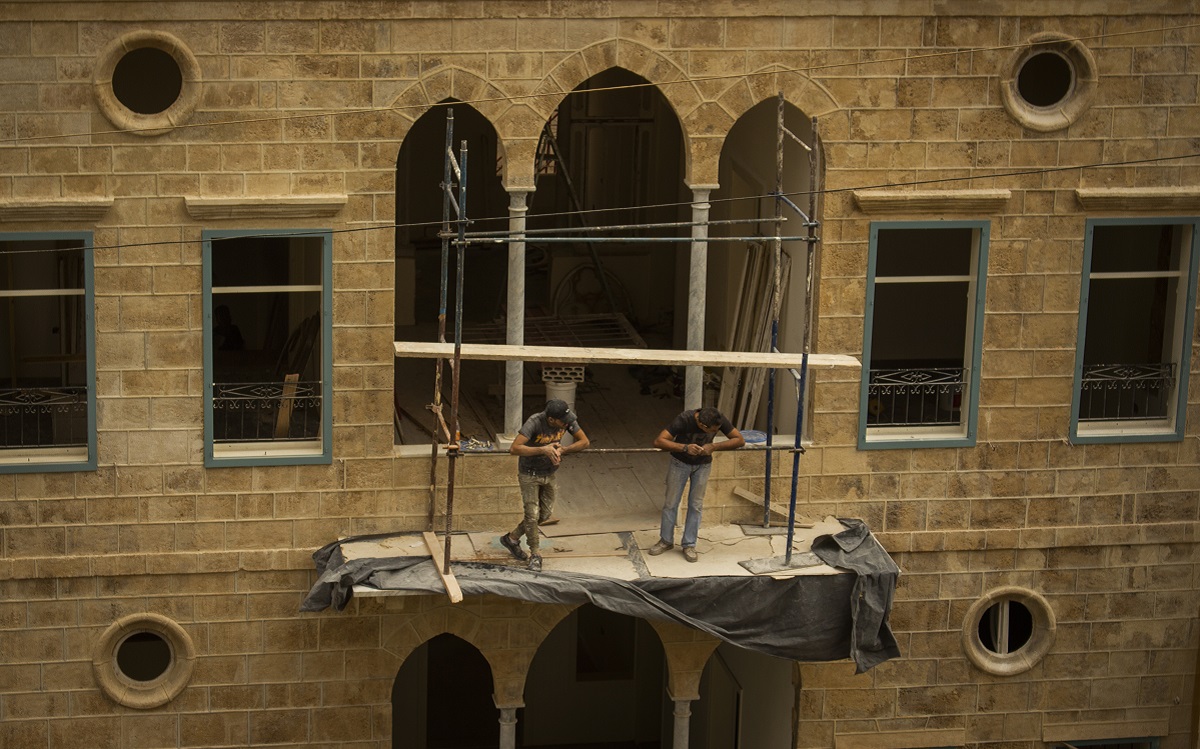 On the street level of a 19th-century triple-arched building cocooned in erected scaffolding and debris netting, a group of elderly men huddled together as they sipped their morning coffee and swapped stories about the mundane day-to-day.

The ancient establishment and those gentlemen, who lived and owned businesses in the quaint neighborhood of Gemmayze for decades, both carry a sliver of the past and were markedly shattered by last year’s Beirut port blast when tonnes of ammonium nitrate stored in a warehouse detonated on Aug. 4, killing at least 218 and destroying or inflicting severe damage to approximately 8,000 buildings, including 640 historic buildings – 60 of which faced the peril of collapse.

Leading cultural organizations promptly intervened and coordinated emergency measures to safeguard Beirut’s heritage homes while other local experts established fresh networks to respond to the urgent need to consolidate and rehabilitate those structures.

More than a year later, most buildings have been saved except those which are abandoned, but the core coalition of cultural organizations faces inadequate funding stymying the progress of further necessary rehabilitation plans.

The Gholam cluster, formerly named after the Gholam family more than a century ago, is a congregation of five residential buildings conceived during the Ottoman Empire and adjacent to a public set of staircases, a nexus between the historic Gouraud Street and the hills of the Lebanese capital’s eastern Ashrafieh district that overlook Beirut’s port.

The family legacy was passed down to the current neighborhood’s mayor, Bchara Gholam, whose office, temporarily relocated due to destruction, remains in one of the historic five buildings till this day.

The cluster’s close proximity to the port was the rationale behind its initial development. When the current port was founded at the end of the 19th century, the city’s center shifted to the eastern flank and Beirut gained an edge in maritime trade and economic growth, making headway toward rapid urbanization in the area surrounding the port.

More than a century later, this proximity almost resulted in a tragic obliteration of these heritage buildings when the port blast sent shockwaves across the city and pulverized both past and present.

In response, Beirut Heritage Initiative (BHI), an independent and inclusive collective, was launched on Aug. 26, 2020 to rehabilitate and protect structures bearing the Ottoman Empire’s and the French Mandate’s architectural expressions, as well as apartment buildings belonging to Beirut’s early Modernist period, an era from 1955 to 1975.

The Initiative collaborates with other relief organizations, one of them being Together Li Beirut, who joined forces with BHI to resurrect the Gholam cluster. BHI has received funding from the French Ministry of Ecological Transitions, who financed the Gholam staircase’s restoration, and the International Alliance for the Protection of Heritage in Conflict Areas (ALIPH), the principal donor for the execution of their emergency works.

The restoration’s first phase embodied emergency works where sheltering and consolidation took place. Sheltering, which involved replacing the blown-away red brick-tiled rooftop with a polyester cover, was crucial for these buildings before winter. Partially damaged rooftops did not require sheltering and were instead recovered straight away. Then, the buildings were propped up to prevent them from collapsing further.

When more funding started coming in, the next step comprised of rehabilitating the buildings’ facades.

“The area that was affected the most by the explosion is the area with the highest concentration of heritage buildings in Beirut,” said Yasmine El-Majzoub, BHI’s Field Operation Manager. “Heritage buildings are more vulnerable than concrete buildings because they’re made out of sandstone.”

The historic quarters of East Beirut, shattered yet resilient, are a metaphor for its dwellers. The social fabric, which has been nurtured for ages, was dismantled in this area when the explosion displaced at least 300,000 people.

The Initiative’s work is people-centered.

The peril of being demolished

BHI’s founding members and executive committee have been fighting for decades to shield heritage buildings from the “greedy” and “vulturous” contractors who swoop up historic establishments only to demolish and replace them with city towers, El-Majzoub said. “This changes the skyline and the cultural identity of the city.”

The Beirut Governor, Judge Marwan Abboud, said he banned the selling and demolition of heritage buildings immediately after the port explosion with no legal backing. Months later, an official law prohibiting those actions for one year was actualized.

“Since my first day in office, I declared that I would rather cut my hand off but not sign a permission to demolish a heritage building and I am still committed to this promise,” Abboud asserted.

Abboud expressed pride in the fact that the reconstruction following Beirut’s port blast preserved the urban fabric, individual proprietorship, and Beirut’s splendor and cultural identity as opposed to the post-civil war rebuilding, and has been “faster, easier, and at a lower cost”.

Due to a lack of state funds, Lebanese officials had delegated the post-civil war rebuilding of Beirut’s Central District to Solidere, a private firm where former prime minister Rafik Al-Hariri was a principal shareholder.

Pleased with the restoration of his home where history is etched on every wall and elegant motifs adorn the balcony’s wrought-iron balustrade, Joseph Chaoul, who owns one of the buildings in the Gholam cluster, said this is the first time the building experiences destruction on this level. Its triple arch, marble columns, and balcony were leveled and the red-tiled rooftop was blown out. “It even survived the war. The building was still standing during that time and I only had to rehabilitate the facade.”

The shockwave from the port explosion arrived from the north, unfortunate for most triple arches, a resplendent characteristic of the Ottoman era traditional Lebanese home, which are one of the weakest points in the building and are always analogous to the north, El-Majzoub said.

“The house is my life. I was born in it and I almost died in it when I nearly bled out to death after the explosion,” Chaoul said.

Taking a stroll in the Ashrafieh vicinity, it’s impossible to ignore the omnipresent eerie, yet heartening, scene of unrelenting construction works.

Over the course of one year, most of the historic buildings from different eras have been sustained excluding those which are deserted, their rehabilitation disputed, and a couple of homes facing Électricité du Liban as their restoration requires more financing due to being more severely ravaged.

“The abandoned houses rarely get funded because funding bodies are mostly concerned with the humanitarian side of the issue: to bring back the inhabitants to their homes,” El-Majzoub said.

The reconstruction of a heritage building is a big-budget project compared to a modern-day building because some construction materials are imported, others are hard to find, she added.

Abboud said he is endeavoring to draw in more funding from the international community, namely the World Bank, to rehabilitate 70 to 80 more buildings.

“I found that the best way to handle these disasters is cooperating with the domestic sector which is free from the administrative routine and bureaucratic obstacles and has proven effectiveness,” Abboud said.

The governor, along with the Directorate General of Antiquities – who strictly demands the restoration of heritage houses into their original state – facilitated the procurement of concessions, mandatory to commence any rehabilitation works on traditional Lebanese houses.

The cultural initiative, BHI, is keen on working with contractors and consultants who follow traditional restructuring methods, where each stone taken out is numbered and then placed in the same spot and in an agreeing orientation as before upon reconstruction, to preserve the building’s historic wholeness.

“We are trying to do interventions where we are not affecting the authenticity of the structure,” said Maroun Khadra, an architect restorer and Associated Consulting Engineers (ACE) site engineer. “Our goal is not to modernize but rather to rehabilitate.”

“And not to add or change,” El-Majzoub blurted.

The Gholam cluster rehabilitation project started in April and by the end of Oct., upon the last rehabilitation phase’s completion, which involves wall painting and installing windows, inhabitants will be able to return to their reinvigorated ancient residence.

“Our work is an eternal activism – it doesn’t end when restoration of historical buildings ends,” Khadra said. “There’s another battle: to safeguard them for as long as we can.”