HomeOpinionCommentaryTaking matters into their own hands
Commentary
Adnan Nasser

Taking matters into their own hands

As the state continues to fail its depositors, regular people like Bassam al-Sheikh Hussein may be pushed to take drastic measures, putting themselves and others in danger. 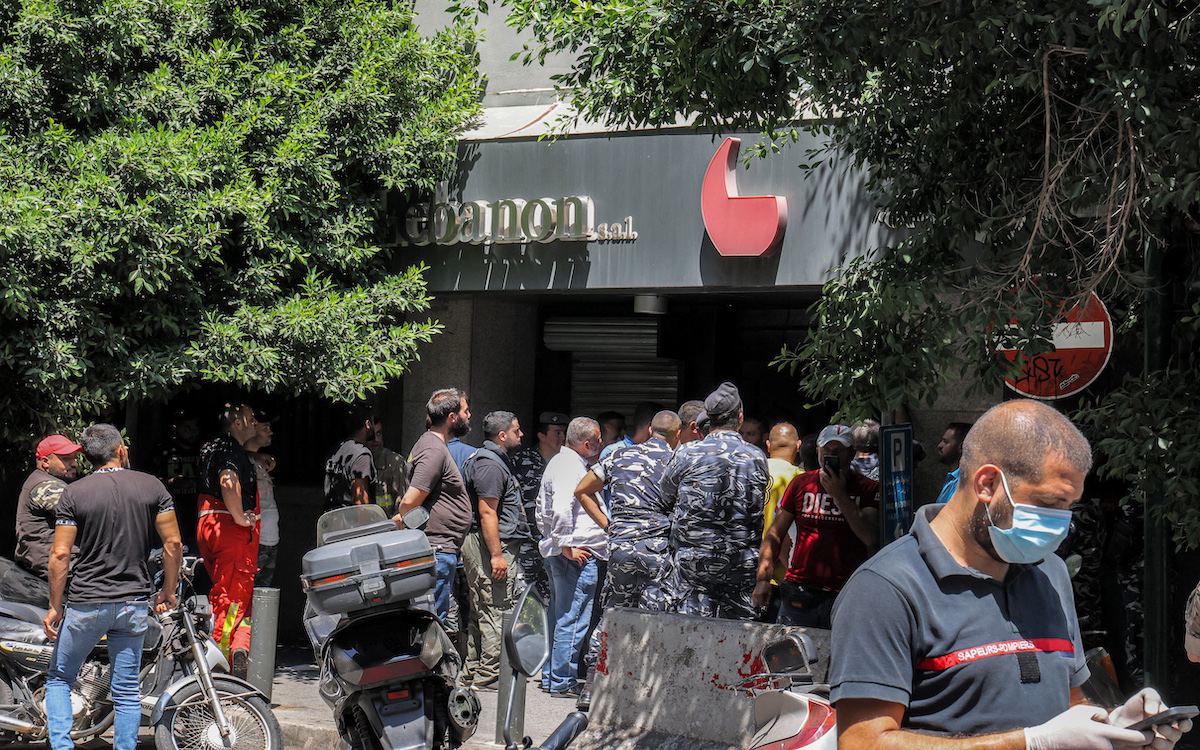 Security forces gather outside a "Federal Bank" branch in Lebanon's capital Beirut on August 11, 2022. A customer armed with a rifle and threatening to set himself ablaze held bank workers hostage on August 11 in Lebanon's capital demanding to withdraw his savings of over $200,000, security sources said. The incident is the latest between local banks and angry depositors unable to access their savings after Lebanon's economic collapse, because of informal capital controls. An AFP correspondent saw security forces surrounding a branch near the busy Hamra commercial street in west Beirut. Photo: Anwar Amro, AFP

Today, a man by the name of Bassam al-Sheikh Hussein held a bank hostage and threatened to set himself on fire with gasoline if his savings, which, like most everyone in Lebanon, are locked by the bank, were not released. According to the authorities, Hussein entered the bank with a shotgun, shouting that he wanted to withdraw the money in his account so that he could pay for his father’s hospital bills. The 42-year-old entered a branch in the historic Hamra district of Beirut, which is home to the prestigious American University of Beirut and a commercial center in the city.

Across the country, activities were disrupted as people stopped to witness another heart-breaking story of a victim of Lebanon’s economic crisis.  Hussein is among the millions of people in Lebanon who have had to put up with the banks freezing their financial assets and putting a cap on how much of their money they can withdraw. On top of that, any money deposited before the crisis began in 2019 can only be withdrawn in the Lebanese currency (lira) at a devalued rate. As people feel a sense of abandonment from their leaders and political representatives who are failing to come up with any solution to the problem of capital control, some are showing that they won’t wait forever.

Back in January, a coffee shop owner named Abdallah Assaii, 37, also broke into a bank in Jeb Jannine in the Bekaa and held employees against their will while demanding his money. He was arrested; but,  successfully withdrew $50,000 in cash from his account. Some Lebanese hailed him as a hero, others regarded his actions as criminal. He had held innocent people hostage and was alleged to have poured petrol oil on them and himself and threatened to set everyone on fire. Such actions are indefensible. Indeed, it is one thing to demand your money and rights, but it is  another thing entirely to harm others who are also victims of the same corrupt system. Nevertheless, today’s events in Hamra are not the same. Hussein only threatened to burn himself alive if the banks did not acquiesce to his demands.

The Washington Post reported that the bank hostage situation is over and that Hussein  was arrested by local authorities. Prior to Hussein’s surrender, his brother Atef was said to have told the Associated Press that his brother was willing to hand himself to the police if the bank provided him with the money needed to pay his father’s and family’s expenses.

“My brother is not a scoundrel. He is a decent man,” Atef al-Sheikh Hussein said. “He takes what he has from his own pocket to give to others.” After hours of negotiations, Hussein agreed to lay down his arms and released the bank hostages on the condition that part of his savings would be provided. Al Jazeera’s Zeina Khodr, who reported on the story from outside the bank, said police escorted Hussein without resistance and the hostages could be seen exiting the premises.

Hussein’s wife, Mariam Chehadi, stood outside the bank telling reporters after he was apprehended that “he did what he had to do.”

Mariam was not the only one who came to Hussein’s defense. A crowd rallied outside the bank, with many chanting “down with the rule of the banks” and “give him his money.”

Everyone in Lebanon who has their money trapped in the banks understands the suffering of Hussein. For many, this man doesn’t deserve to be labeled a criminal. Nor should he be called a hero. He was simply trying to take back what was rightfully his. His motivations had nothing to do with personal desire for money. He was trying to help his family with his own money. Who else is looking out for him and others in a similar predicament? Everyone in Lebanon is asking, “where is the state?” Former Lebanese economy minister, Raed Khoury, said that what is happening in Lebanon is “really frustrating,” and went on to say that Hussein’s anger should be directed at the government, and not the banks and bank employees.

But it was in fact the banks who initially applied the non-official capital controls without warning. People demanded government action to look out for their wellbeing, but in response, the parliament approved a capital control law that protected the banks, not the depositors.

Lebanon at this moment exists under the laws of the jungle. Human beings do not have an indefinite amount of time on earth. Dignity is as essential to a human’s life as water and air. People will not sit by and let a corrupt group of oligarchs rob them of their futures. The array of new representatives in parliament voted in by a large constituency demanding change and reform must fight tooth and nail to protect the rights of ordinary people like Bassam al-Sheikh Hussein.

Adnan Nasser is a foreign policy analyst and journalist with a focus on Middle East politics and relations. He tweets @Adnansoutlook29.