The weekly roundup from NOW. 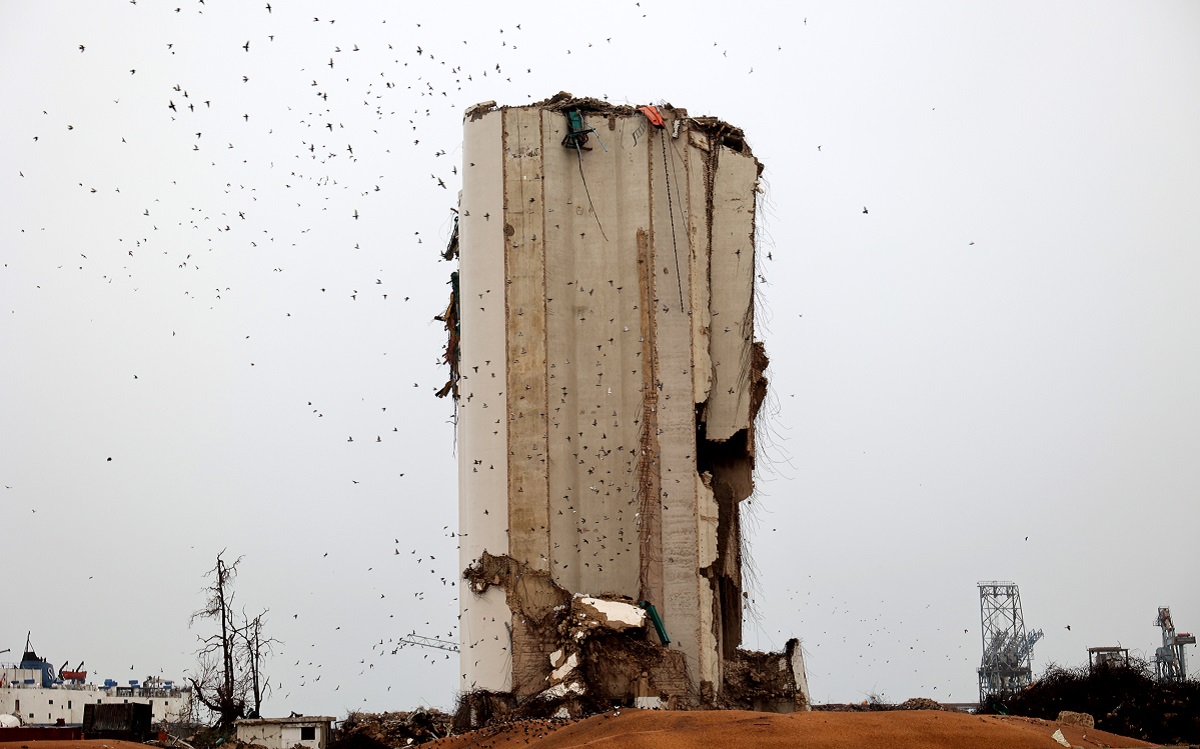 There are moments one never forgets. They remain carved into one’s memory as landmarks of intense emotional experience.

Majida El Roumi’s Matrahak bi albi (Your place in my heart) is supposed to be a love song. For me it has always been a song about a father who was killed.

I heard it first played on the piano in January 2011, when I was filming an interview with Elias Azar, son of former prosecutor Said Azar. The prosecutor died during the Chevrolet bombing in 2007. He had survived two attempts on his own life, but died during the bombing that targeted Internal Security Forces captain Wissam Eid, who was investigating Rafik Hariri’s murder at the time.

“This song always reminds me of my father,” I remember Elias saying.

I was assigned and wrote my first and last obituary on December 27, eight years ago.

“They always kill the best people in this country, the most competent, the ones who really have a chance to make things better for us, regardless of political affiliation,” one wise old man told me eight years ago.

Mohamad Chatah was probably one of the most competent politicians Lebanon has ever had.

But this bit is not about that. It’s about human beings that are trampled on, without anyone even looking twice at their grief.

Watching Ronnie Chatah’s powerful conversation with his mother, Nina, made me think of Majida El Roumi’s song. Matrahak bi albi is also Nina Chatah’s song. For every morning she turns to ask Mohammad Chatah a question and he’s no longer there.

A song for the people left behind, who are forced into accepting the loss, who never see justice, who are told not to ask questions, who have to bury the anger because “there is nothing else we can do”. Who wakes up at 4 am, eight years afterward, with a sudden feeling that they are not alright.

The concept of fate, the word “martyr” – which they grow to hate – and a grave to visit periodically is what they have left to soothe their grief.

There is no rite of passage that can give them peace because there is no justice to give them closure. For them, it’s a wound that reopens. Again, and again.

And yet, the courage of people like Ronnie and Nina Chatah, like Monika Borgmann, Elias Azar, Toufic Ghanem, of Wissam Eid’s parents; of hundreds and hundreds more Lebanese who lost someone dear to a bomb or to bullets. Their will to reopen their wounds and speak about their grief so that they remind everyone that they deserve justice is what we should be thankful for many a holiday season to come.

The courage of the families of 227 victims of the Beirut blast and the survivors who constantly push for a fair investigation and accountability is what we should be thankful for, for they are fighting everyone’s fight.

Tarek Bitar, the Lebanese judge leading investigations into last year’s Beirut port blast, was once again forced to stop work Thursday over a lawsuit filed by ex-ministers he had summoned for interrogation, an official told AFP.

The suspension is the fourth since Bitar was chosen to lead investigations in February.

It comes two weeks after he was cleared to resume work, after a series of court challenges raised by political leaders derailed his efforts.

On Thursday, Bitar was informed of a lawsuit submitted by lawmakers Ghazi Zeaiter and Ali Hasan Khalil — both members of the Shiite Amal movement — which forced him to pause the probe until a ruling is issued, a court official told AFP on condition of anonymity.

Lawsuits by the dozen: The total number of lawsuits against Bitar now stands at 18. Most were filed by officials he is seeking to interrogate on suspicion of criminal negligence.

Stating the very obvious: The international community will not step up to help Lebanon if political paralysis continues to hamper the implementation of desperately needed reforms, UN Secretary-General Antonio Guterres said on Tuesday, December 21, as he was leaving Lebanon after a 3-day visit.

“The international community will probably not — independently of support that has already been provided — respond the way it needs to respond if they see the country is paralyzed,” Guterres told journalists.

“We need the support of the international community to be much larger than it is today and the Lebanese people deserve it but there is homework that needs to be done in Lebanon,” he said.

International donors have only funded 11 percent of the $383 million UN response plan for the country, Guterres said.

Some aid for Lebanese teachers: The World Bank on Thursday said it agreed with its partners to repurpose $37 million in funds to help Lebanon’s public-school teachers survive a crushing economic crisis.

The World Bank and the UK Foreign, Commonwealth and Development Office would divert the money from the Lebanon Syrian Crisis Trust Fund, which aims to assist Lebanese communities in accommodating Syrian refugees, the bank said in a statement.

It would be used to “provide financial incentives to public school teachers suffering from the severe economic and financial crisis in Lebanon to ensure they can purchase fuel to travel to work,” the statement added.

The “exceptional” financing, which is valid only for the 2021-2022 academic year, came at the request of Lebanon’s government, the bank said.

When life gives you lemons: Check where they come from, cause if it’s Lebanon, they may be filled with something else than juice for lemonade.

Dubai police said on Thursday, December 24, that they arrested four men “of Arab nationality” for trying to smuggle millions of dollars worth of captagon pills hidden in plastic lemons into the UAE.

Captagon is an amphetamine-type stimulant manufactured in Lebanon, Iraq and Syria –in the region – and, so far, most of it was bound for Saudi Arabia.

The drugs, which the official WAM news agency said had a street value of $15.8 million, were seized after a tipoff, police Major General Khalil Ibrahim Al Mansouri said. The Emirati police seized 1,160,500 pills.

The source: The Emirati police did not disclose per se the origin of the cargo – 3,840 boxes of lemons, 66 of which had fake plastic lemons containing the captagon pills.

But they released a video of the seized cargo showing boxes with markings indicating their origin was Lebanon.

The regional war on drugs: The Gulf countries are huge markets for drugs and most governments have long tried to curb the trade. A lot of the Captagon comes from Syria – which has already been deemed a narco-state – through Lebanon’s ports. Some Captagon is also produced in Lebanon itself. The Lebanese Army announced on several occasions in the summer of 2021 that it had raided Captagon factories in eastern Bekaa. The raids, however, resulted in no arrests.

Lebanon’s government is often criticized by Gulf countries for not cooperating fully in the war against drugs.

In April, Saudi Arabia announced it was suspending imports of fruit and vegetables from Lebanon after more than five million captagon pills hidden in pomegranates were seized. In June, over 14 million amphetamine pills concealed between sheets of tin and originating in Lebanon were seized in the kingdom.

Tense relations: The Gulf countries, some of Lebanon’s biggest regional supporters and trade partners, blame Hezbollah, which is allied and works closely with the Syrian government, of facilitating and benefiting from the drug trade. On November 30, several GCC members, starting with Saudi Arabia, cut political and trade ties with Lebanon due to Hezbollah’s boosted influence over the country’s government. The pretext was a statement made by the Lebanese Information Minister George Kordahi blaming Riyadh for human rights violations in the war in Yemen, but the core problem was Hezbollah’s control over the cabinet and Lebanon’s lack of any decisive action to stop the drug trade.

The fact that the drugs still reach the Gulf from Lebanon may increase tensions. Many Lebanese residing and working in the UAE already avoid speaking about any politics for fear that they may be deported.

Back to Yemen: The Saudi-led coalition on Sunday accused Iran and Hezbollah of helping Yemen’s Houthi rebels to launch missiles and drones at the kingdom, where two people were killed.

Lebanon is the country with the second-highest rate of refugees per capita in the world, according to the UN. After the tiny island of Aruba, in the Caribbean, which has 110, 000 inhabitants and hosts 17,000 Venezuelans fleeing the economic crisis and political instability in their country, Lebanon follows with 125 refugees/1000 locals.

However, with Lebanon itself struggling with a disastrous economic crisis triggered by endemic corruption, political paralysis and decades of regional account settling, the refugees, as well as local population are knocking on Europe’s doors, as the Gulf countries are already closing theirs.

Faced with this “danger”, some European states have already started denying travel visas for the Lebanese because they are now presenting a risk of illegal immigration.

The strange case of a US passport: Turkish police arrested and jailed a US diplomat working for Washington’s consulate in Beirut on suspicion of issuing a fake passport to a Syrian national, Turkish media reported Wednesday, December 23.

The pro-government Daily Sabah newspaper said that diplomats’ customary immunity from prosecution does not apply in countries in which they have no accreditation.

This gave Turkey the right to arrest the diplomat, who was accredited to only work in Lebanon, the newspaper said.

The diplomat was initially detained at Istanbul Airport on November 11. It is not clear why the Turkish authorities waited for over a month to publicize the affair.

Podcasts: Anthony Sargon, the host of Do Not Worry Podcast, released a documentary about Lebanese controversial TikTok star Joseph Chada. The 24-year-old math and science teacher stirred a huge controversy on social media by posting a video with a minor he said he was dating. Chada later on said it was part of an awareness campaign. The story gets pretty incredible and sometimes even creepy, with a group of hackers exposing sexual predators disabling Chada’s accounts. But there is more to it than meets the eye.

Agenda: Lebanese president Michel Aoun is set to address the nation on Monday night in what most local media presents as an “incendiary” speech. On what he may say, read Tylia El Helou’s analysis on Ici Beyrouth (in French).

Until next week, stay safe and wear a mask, as Covid cases are increasing once again.