The Democrats in Jerusalem

A Democrat delegation meeting with both Palestinian and Israeli organizations militating against the occupation may not be enough, but may prove helpful, Mohamad A. Hamdan writes. 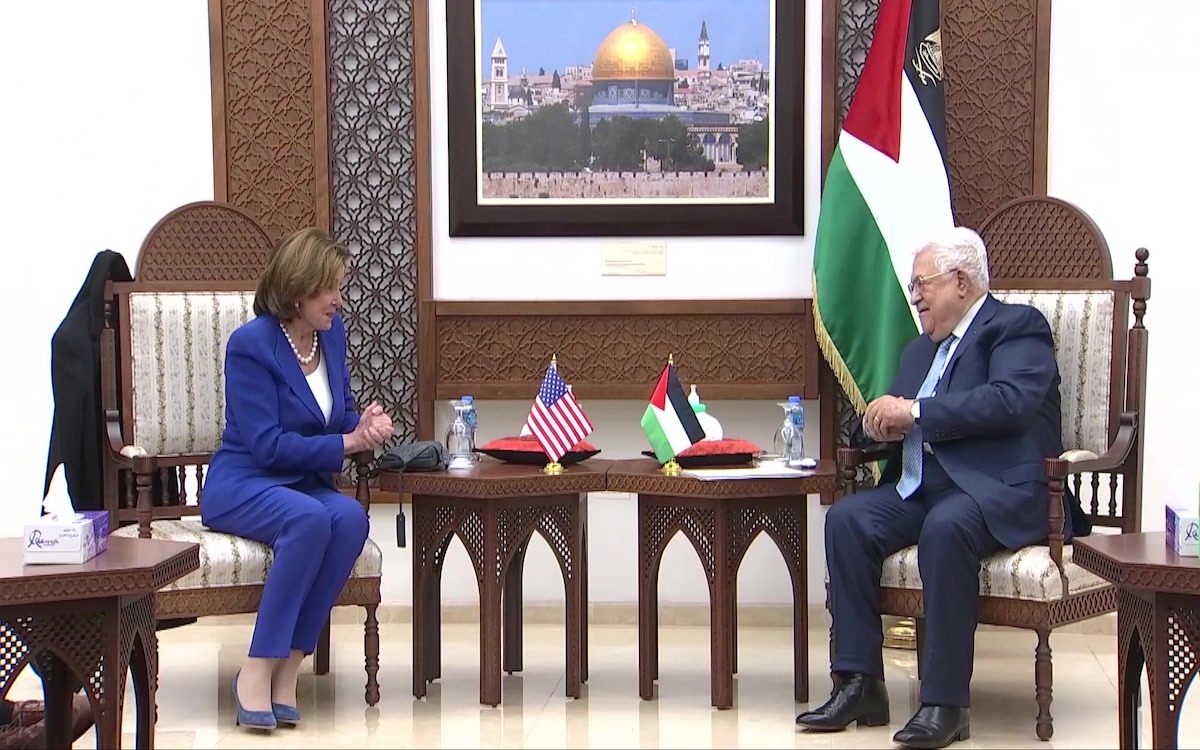 Palestinian president Mahmud Abbas met with US House Speaker Nancy Pelosi in the Israeli-occupied West Bank for talks on reviving a two-state solution to the conflict, according to Abbas's office. Photo: Palestine TV/AFP

Throughout its history, and yet today, the city of Jerusalem was rarely vacant of foreign emissary visits. For the past century, there has been an uninterrupted presence of western lawmakers and politicians in the disputed city. As the late Amos Oz describes it, Jerusalem is attractive to all kinds of people; fanatics or redeemers, self-appointed prophets or messiahs, and today, world reformers.

Many of the delegations, particularly in the context of the Trump administration, who had been visiting Israel were given Disneyland-like tours that brushed off the occupation of the West Bank as a trivial detail. But last week’s visit was very much different.

In the process, the all-Democrat congressional delegation lead by House Speaker Nancy Pelosi met with various Palestinian officials in a series of meetings that dealt with issues surrounding the tribulations Palestinians face. They launched a USAID project for small businesses affected by the COVID-19 pandemic and discussed further aid in other fields.

Could we be witnessing a changing dynamic in US foreign policy over the Occupied Territories after years of a stagnant state of indifference, one may ask. Can we reconcile a discourse that is void of any “grand” and yet materially insignificant gestures of “support”?

Five years after the decision to boycott Washington, Palestinian president Mahmoud Abbas urged the US in his meeting with Pelosi to end the “unilateral actions” that may result in deleterious ramifications in the efforts toward a future Palestinian state.

The delegation also met with a wide range of Israeli and Palestinian left-wing activists. On Thursday, Pelosi and the Democrats were led by dovish Attorney and Jerusalem expert Daniel Seidemann in an educational tour of East Jerusalem.

Seidemann is the founder of Terrestrial Jerusalem, an NGO that works, alongside others like Ir Amim and PeaceNow, to identify and track developments, battle evictions and demolitions, and strive towards a better reality in the city of Jerusalem.

Decades after the Oslo peace process and the signing of the Declaration of Principles, the prospects for a better reality for the Palestinians have grown slimmer as Israeli support for a Palestinian State has waned.

Israeli politics, formerly dominated by the Labor party for decades, finds a former head of the Yesha Council, an umbrella organization of municipal councils of Jewish settlements in the West Bank, as prime minister.

However, even so, there is a growing nostalgia for pro-peace activism, accompanied by the loss of prodigious American support. While US President Bill Clinton overtly advocated and campaigned for Shimon Peres, winner of the 1994 Nobel Peace Prize together with former Israeli PM Yitzak Rabin and Palestinian Liberation Organization leader Yaser Arafat, against much more radical Benjamin Netanyahu years earlier, Democrat foreign policy during Joe Biden’s presidency has been quite distant from direct influence in the “peace-making” context.

Considerably, American recognition of these pro-peace groups and NGOs whose efforts were seen in the Sheikh Jarrah demolitions is by no means sufficient. However, a substantial interest in these “details”, considered peripheral during Donald Trump’s administration, is, in fact, a step forward.

“Progressives, and anyone who wants a better future for Israelis and Palestinians, should seek constructive US involvement in efforts to address the Israeli-Palestinian conflict, and should be applauding and supporting such visits,” said Americans For Peace Now President and CEO Hadar Susskind.

“We at APN have been working closely with members of this delegation and their staff to equip them with relevant information and analysis. We deeply appreciate their engagement to advance the cause of peace and security for both Palestinians and Israelis.”

The activities of these NGOs, for years, have been substitutes for the supposed parliamentary opposition to the occupation. However, with a growing surge in settler violence against Palestinians and Israeli activists, we have been recently witnessing a wave of international condemnations alongside left-wing Israeli denunciation of the situation in East Jerusalem and the West Bank.

The American delegation had no specific criticism of the recurring violations in the West Bank or East Jerusalem, namely the Sheikh Jarrah evictions. However, in the course of recent history of American influence in the domain of Israeli-Palestinian negotiations, a visit at this level cannot be but be seen as a significant, timely, and needed event.

In the course of recent history of American influence in the domain of Israeli-Palestinian negotiations, a visit at this level cannot be but be seen as a significant, timely, and needed event.

In retrospect, one cannot expect grand statements of condemnation from the Americans. Nevertheless, the meetings and the visits with prominent Jewish and Palestinian anti-occupation figures do signal the notion of a sanguine change in rhetoric.

This growing condemnation, alongside the surging incapacity and unaffordability of maintaining the occupation, can prove to be worthwhile factors to capitalize on in the efforts to engender a better reality. Innovatory solutions, such as those mapped out by the former Israeli Minister of Justice and Oslo negotiator Yossi Beilin with Palestinian Hiba Husseini who are now advocating for a confederation, are desiderata in this atmosphere perpetual tragedy.

The American delegation surprisingly communicated a tangible dose of reality which may prove to be consequential. In any bid for progress, engagements like the tour on the Mountain of Olives ought to become recurring.

Now that there is a relatively “sympathetic” tone in Washington, it is high-time to further address the violations in Sheikh Jarrah, in addition to all forms of settler violence in our bid to familiarize the international community with the tragedies of the Palestinians under occupation. Tangible on-the-ground support is crucial today lest we, as Arabs and Jews in this period of shifting political dynamics, afford to aspire to a better reality; the grandiose gestures can come later.