A claim filed in Harris County aims beyond monetary recovery. 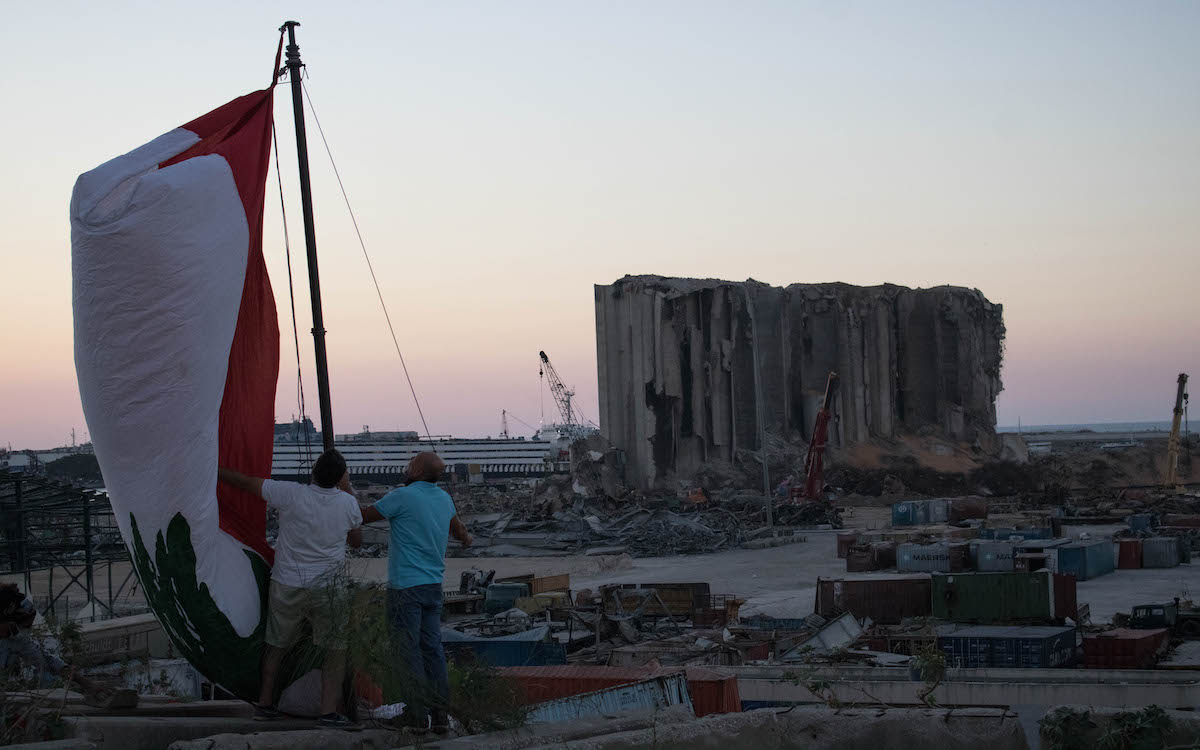 Demonstrators raise the Lebanese flag near the Beirut Port on the one-year anniversary of the August 4 explosion. Photo: Nicholas Frakes, NOW

Almost two years have passed since the world looked on in horror at the apocalyptic scene that unfolded in the Lebanese capital. Beirut’s port was set ablaze on August 4th, 2020, in what has widely been described as one of the largest non-nuclear explosions in history. The detonation of explosive-grade ammonium nitrate that had been negligently stored at the port led to the deaths of hundreds, and the injuries of thousands, including at least 150 who acquired disabilities. It caused damage to tens of thousands of properties, the displacement of hundreds of thousands of people, and untold psychological harm.

Yet, until today, no one has been held accountable for the surreal tragedy that befell our country. In fact, Judge Tarek Bitar, the head of Beirut’s Criminal Court, who is overseeing the investigation into the blast, is the relentless target of corrupt politicians seeking to halt his investigation through obstruction, provocation and efforts towards his removal, in total disregard for the enormous grief of victims of the blast and their families. Lebanon’s systemic political corruption continues to mercilessly wreak havoc on a traumatized nation still reeling from, and awaiting any semblance of justice for, what transpired in Beirut two years ago.

On 11th of July 2022, nine US Nationals, who suffered indescribable pain and loss because of the blast, filed a claim against US-Norwegian geophysical services group TGS (TGS ASA and TGS–NOPEC Geophysical Co.) at the District Court of Harris County in Texas (where TGS operates its business). The firm owns Spectrum Geo (UK), a company it had merged with in 2019, that had entered into multiple contracts with Lebanon’s Ministry of Energy and Water and caused the chartering of a Moldavian flagged unseaworthy ship (the Rhosus) to stop in Beirut which ultimately led to that fateful summer of 2020. The Rhosus was illegally carrying military-grade ammonium nitrate believed to be destined for Syria, where sanctions had been in place against the import of weapons and explosives to the country.

The claimants, advised by American legal firm Ford O’Brien LLP, say the defendant knew that it was entering into a contract with the Lebanese Ministry of Energy in a highly corrupt, highly dysfunctional state, and that it was engaging in ultrahazardous conduct that resulted in the deaths of the plaintiffs’ relatives.

The lawsuit brought against TGS is an important step towards attaining justice for the Lebanese people. Aside from seeking monetary compensation for all blast victims, the aim of plaintiffs and of Accountability Now, the Swiss foundation that has supported their action and of which I am co-founder, is to expose and prosecute the individuals responsible for setting the stage that led to the Beirut blast. The Human Rights Watch investigation into the blast concluded last year that evidence indicates that many of Lebanon’s top leaders were informed of risks posed by the ammonium nitrate and failed to take necessary actions to protect the public.

The list of implicated politicians and state employees includes persons who were aware that the defunct Rhosus would be chartered, and others who covered up the intended purpose and destination of the ammonium nitrate by purporting that Rhosus’ voyage only intended to pick up seismic surveying equipment from Beirut and entered Beirut’s port in breach of laws and regulations surrounding explosive materials import and handling. It is now moreover clear that lower-ranking port security officials appeared to highlight the threat to their superiors but refrained from taking further action in disregard to applicable laws and regulations surrounding explosive materials import and handling. The list names those officers’ superiors in rank all the way up to the National Defence Council chaired by President Michel Aoun. The Council failed to take urgent measures when it was formally informed by the General Directorate of State Security while it was still time to save the capital, about “the presence of a large amount of ammonium nitrate in one of the wards of the Beirut Port”. One can easily recognize in this complex web of responsibilities the cogs and wheels of an evil bureaucratic machinery, that has plagued Lebanon since the end of the civil war in 1990 (in this case probably using the clever cover of a suspiciously negligent international oil & gas contractor).

This lawsuit against TGS is a cornerstone in part of a wider effort, led by Accountability Now, to expose the link between the shadow state security apparatus that has occupied and captured Lebanese institutions for years and the evil bureaucratic machinery that has plagued Lebanon, a country currently ranked 154th out of 180 countries in level of corruption, according to the 2021 Corruption Perceptions Index reported by Transparency International. This Claim is also an attempt to neutralize and dismantle these cogs and wheels, as well as the moral fallacy of arguing their innocence.

“When we describe a political system how it works, the relations between the various branches of government, how the huge bureaucratic machineries function of which the channels of command are part, and how the civilian and the military and the police forces are interconnected, to mention only outstanding characteristics- it is inevitable that we speak of all persons used by the system in terms of cogs and wheels that keep the administration running(..). Here it is indeed true what all the defendants in the postwar trials said to excuse themselves: if I had not done it, somebody else could and would have. (..) if the defendant happens to be a functionary, he stands accused precisely because even a functionary is still a human being, and it is in this capacity that he stands trial.” Hannah Arendt, “Personal Responsibility Under Dictatorship”

Our aim through this lawsuit goes beyond seeking reparation from TGS. We aim to put the men behind the Lebanese system of corruption on trial for their personal responsibility in the events that took place, as well as expose the security apparatus that operates behind curtains and not a hopeless pursuit of the system itself, whose trial is for historians. For the sense of confusion and despair in Lebanon will continue, sadly, until we experiment the reality of an impartial trial that brings along all the truth and all the accountability and could lay the ground for a future national reconciliation. It is therefore essential, on the second anniversary of the Beirut Blast disaster, and in the absence of any other visible legal route, to attempt to achieve that very goal through an impartial US judicial process and hopefully the trial and discovery that shall follow. The real dividing line today as Arendt writes, is “between those who want to think and therefore have to judge by themselves, and those who do not,” considering as unreliable those who merely cherish and uphold moral norms during a period of total moral collapse. It is therefore also an occasion for the Lebanese to think and therefore judge by themselves in light of the truth that shall hopefully surface during the trial process.

Lebanon, which suffered tremendously during its 15-year civil war, has always functioned on a narrative that favors national forgetting as a means of rebuilding state institutions. The claim we filed in Texas shows how much that narrative has failed. We will not reconcile yet again with a dysfunctional system whose corruption is literally killing us. We want justice served for the Lebanese people.