Air pollution is increasing rapidly in Lebanon. Economic collapse and non-existent policies are causing cancer and lung disease – and the country’s citizens are left on their own. 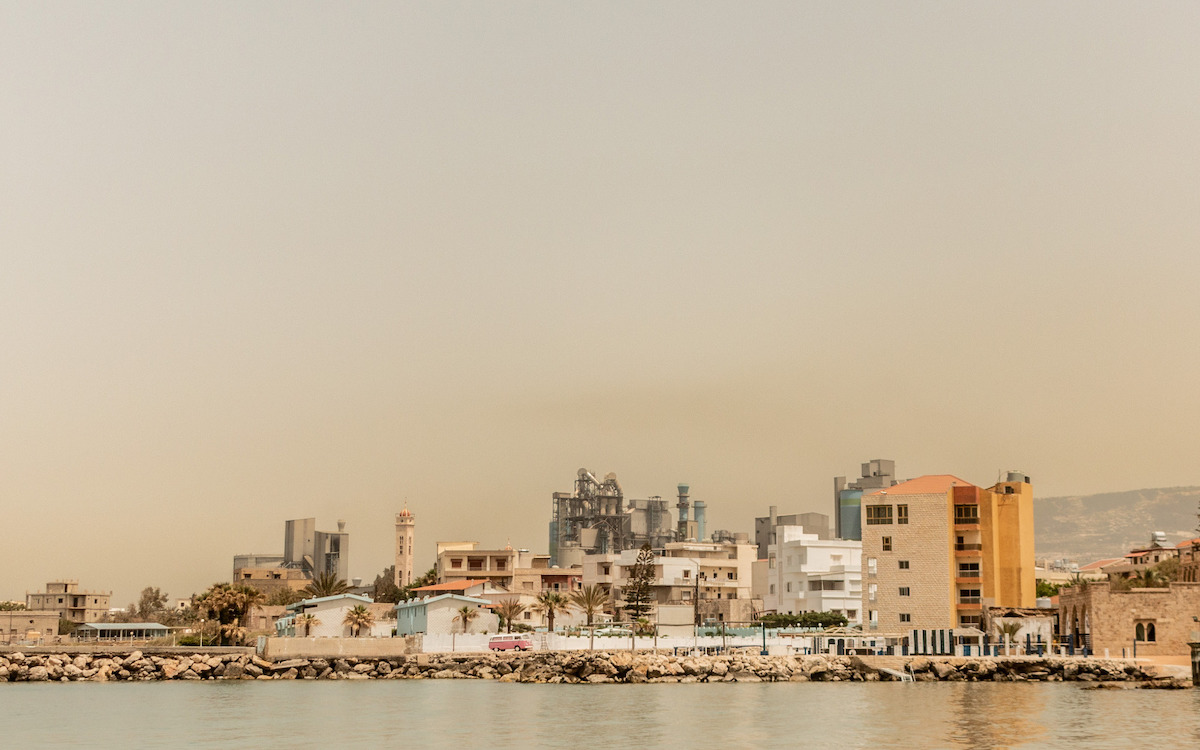 Air pollution in Lebanon has become increasingly worse since the start of the economic crisis in 2019, leading to increased risks of respiratory-related illnesses. Photo: Philippe Pernot

Sarah Safieddine says she was shocked when she recently visited her parents in Beirut.

“In their apartment, a black dust was accumulating on the floor, on the windowsills, everywhere,” the research officer at the National Center for Scientific Research (CNRS) at the Sorbonne University (Paris), told NOW.

“What must it look like in their lungs? I hardly want to imagine,” the Lebanese French researcher exclaimed.

The immediate culprits are the private electricity generators. They have mushroomed around the city, and the country in general, due to the incapacity of the government to reform the energy sector and ensure electricity for Lebanese households and businesses.

In Beirut alone, more than eight thousand of these small but noisy engines burn gasoline to provide power almost 24/7, according to a study.

Lebanon is no stranger to electricity issues, but due to the economic crisis that has steadily worsened since the winter of 2019, the public electricity supply by Électricité du Liban (EDL) has collapsed: it can only deliver 2 hours of electricity a day. From being a luxury good for wealthier residents, generators have become part of everyday life for most Lebanese, who share them across buildings and even neighborhoods.

“The disaster is because they burn heavy oils, which are extremely toxic and are linked to pulmonary diseases and cancer,” explains Najat Saliba, an environmental researcher, activist and chemistry professor at the American University Beirut (AUB) and newly elected member of Lebanese parliament.

The generators release high levels of fine particles that mix in the blood and poison the body: levels of carcinogens in Beirut have risen 300 percent since the crisis began, she affirms in a study.

One of the most polluted in the Mediterranean

Yet generators cause only 20-40 percent of air pollution in Lebanon – the tip of the iceberg, in other words. “The explosion of emissions from generators only highlights a problem that has existed for decades,” Safieddine explains.

Car traffic, she says, is responsible for half of the country’s air pollution: since the downfall of public transportation after the 1975-1990 civil war and the car-friendly policies of the successive governments, Lebanese citizens have relied on often old and dirty passenger cars.

In addition, industrial areas, gravel pits and waste incinerators which, combined with the other factors, “contribute to Lebanon being one of the most polluted countries in the Middle East, despite its breeze and abundant forests and mountains,” sighs Safieddine.

“Metn hospitals close to the Zouk Mosbeh power plant have seen a steady increase in pulmonary diseases. As a fact, fine particles released by heavy oils are the first cause of pollution-linked death cases worldwide! In highly polluted regions of the world,  the average person can lose up to 5 years of their life,” she added.

In Lebanon, the figures are alarming: the concentration of fine particles would exceed the World Health Organization’s recommendation by six times. According to the latest report from Greenpeace’s regional branch, air pollution in Lebanon costs $1.4 billion to the public health sector and to the economy annually – about 2 percent of its GDP.

“Lung, breast, and bladder cancers, as well as respiratory and heart problems, occur 10 years earlier than in the rest of the world,” reports Saliba. And overuse of the generators would cause about 3,000 more lung cases, 500 more cancer cases and $800 million more in health care spending each year.

Between climate change and economic collapse

Moreover, climate change is hitting the country particularly hard. Contrary to local pollution, it is caused by global factors and there is virtually nothing Lebanon can do about it. “The whole region will warm by one and a half to three degrees more than the rest of the world. Little Lebanon is barely emitting, but it will be hit with full force,” Safieddine says.

The rise of global temperatures and the acceleration of extreme weather episodes will worsen the effects of local pollution. For example, droughts cause forest fires as well as a concentration of fine particles in the air – causing smog and additional health problems.

“With a rise of 1 degree, the livelihood of numerous animals and plants is threatened. The world famous cedars will also be under the threat of new diseases brought by insects that thrive in warmer climates,” Safieddine warns.

The means to mitigate the effects of pollution and global warming have decreased dramatically. Private actors, if any, are on hold as the dollar rate is prohibitive for any new projects.

Lebanon’s idyllic villages and mountains “are on the first seat to experience climate change, although their air may not seem polluted”, affirms Saliba. “Between water scarcity, sewage disposal problems, dried-out crops, forest fires, and soils killed by pesticides… there is a lot of work to do”, she explained.

The country’s economic crisis – the worst in the world since 1850, according to the World Bank – is playing a particularly serious role.

“Neither the state nor society has the resources to combat climate change and pollution,” explains Vahakn Kabakian, a climate change advisor at the U.N. Development Program (UNDP), who works with the Environment Ministry.

“The means to mitigate the effects of pollution and global warming have decreased dramatically. Private actors, if any, are on hold as the dollar rate is prohibitive for any new projects,” he explained.

“The Lebanese government has adopted clear targets after the Paris agreements: 20-30% of the country’s emissions should be reduced,” Kabakian stressed. These could be reached by e.g., subsidizing e-cars or, as is the case of the electricity plan, importing natural gas instead of heavy fuel oil. Some villages also benefit from funding and grants for solar panels as replacements for generators.

Kabakian welcomed the new ministerial decision published in February 2022 updating the standards of air pollution. “It finally updates a 20-year-old legislation and will make the standards much stricter.

Kabakian also stressed that some directives exist that apply to generators. These pertain to the height of their stacks depending on their proximity from living areas, while few of them are equipped with particle filters. “But there is a lot more that needs to be done,” he said.

The ministry of environment has limited power, since it mainly encourages and requests other ministries to take action that contribute to national reduction of emissions. “The consideration of climate change has improved drastically over the last years, but for sure it is still not ideal” among officials, he recognized.

The effects of indoor pollution have never been studied, so we have no idea of how bad the situation is. All we know is that opening the windows doesn’t make it better.

Safieddine is more critical. “With every new minister there is a new plan, so long-term strategies are inexistent,” she said. “There is little interest in the government to public health issues, and it is always driven by economic or political agendas.”

The country’s sectarian political system seems to be at the core of the problem. “Air pollution is an example of the corruption and clientelism that prevails in all sectors,” criticized an environmental activist from a major NGO, who wishes to remain anonymous.

“Energy policy was liberalized and divided in the hands of the post-war elites in the 90’s, so that every region and party insist on having their own polluting energy infrastructures – else, they will block any project which doesn’t benefit them.”

The example of the electricity sector is telling. “The politicians and their friends spent years selling EDL’s electricity under the market price, accumulating debt, in order to make profit,” she affirmed. Because of this, EDL could never be modernized and has continued burning crude petroleum, an extremely polluting resource. This, in turn, led to today’s generator catastrophe.

“Instead of regulating them with environmental standards, all politicians make profits from pollution,” the source criticizes, saying that some $9 billion is collected annually by the “generator mafia” and its political sponsors, which are often businessmen associated with fossil fuel industries.

“This government has spent 40 million dollars on importing heavy fuel oil with low-grade specifications, and was intending to make even more money from the imports of incinerators through the Cedre conference,” added Najat Aoun Saliba, who currently sits on the environmental committee in Parliament.

Our quality of life is already so bad that we can’t start guilt-tripping ordinary citizens for the failures of the state. Lebanon has no impact on global warming, we are merely on the backseat paying the consequences of the big countries’ emissions.

In Lebanon, the wealthiest 10 percent of the population own almost 70 percent of the total wealth, including the current prime minister and billionaire Naguib Mikati. “They see the environment and public health only as an economic resource and don’t realize how costly pollution is,” the anonymous activist said.

In the midst of this crisis, there is little that citizens can do. “It sounds counter-intuitive, but air quality can be as bad indoors as outdoors: the pollution gets trapped inside” explains Safieddine. This means that citizens who cannot afford outdoor activities anymore, or those with no park close to their homes, have no escape out.

“The effects of indoor pollution have never been studied, so we have no idea of how bad the situation is. All we know is that opening the windows doesn’t make it better,” she said.

Although many often blame the bad habits of citizens- littering, throwing waste in nature, overusing the AC, and driving individual cars -, Saffiedine doesn’t believe such an individual approach to be the solution.

“Our quality of life is already so bad that we can’t start guilt-tripping ordinary citizens for the failures of the state,” she asserted. “Lebanon has no impact on global warming, we are merely on the backseat paying the consequences of the big countries’ emissions,” she said.

In the absence of state policies, Safieddine believes it is the role of researchers and universities to ring the alarm bells. “We urgently need to produce more statistics and facts: if we understand how bad we are suffering today, perhaps we will be scared enough to save our future,” she said.

Yet, the crisis is hindering many researchers from maintaining the costly machines, laboratories, and equipment needed. “I could not continue some of my research because we don’t have enough electricity to use our computers and devices”, said Berna Hamad, a professor at the Beirut Arab University campus in Tripoli who studies the effects of pollution on the North’s seas and rivers.

“Science is in crisis, and we cannot plan the future if we have no knowledge of the present”, she protested.