The long journey to laughter

Comedian Shaden Esperanza talks to NOW about comedy, politics and the hardships in finding her true self and the strength to speak up. 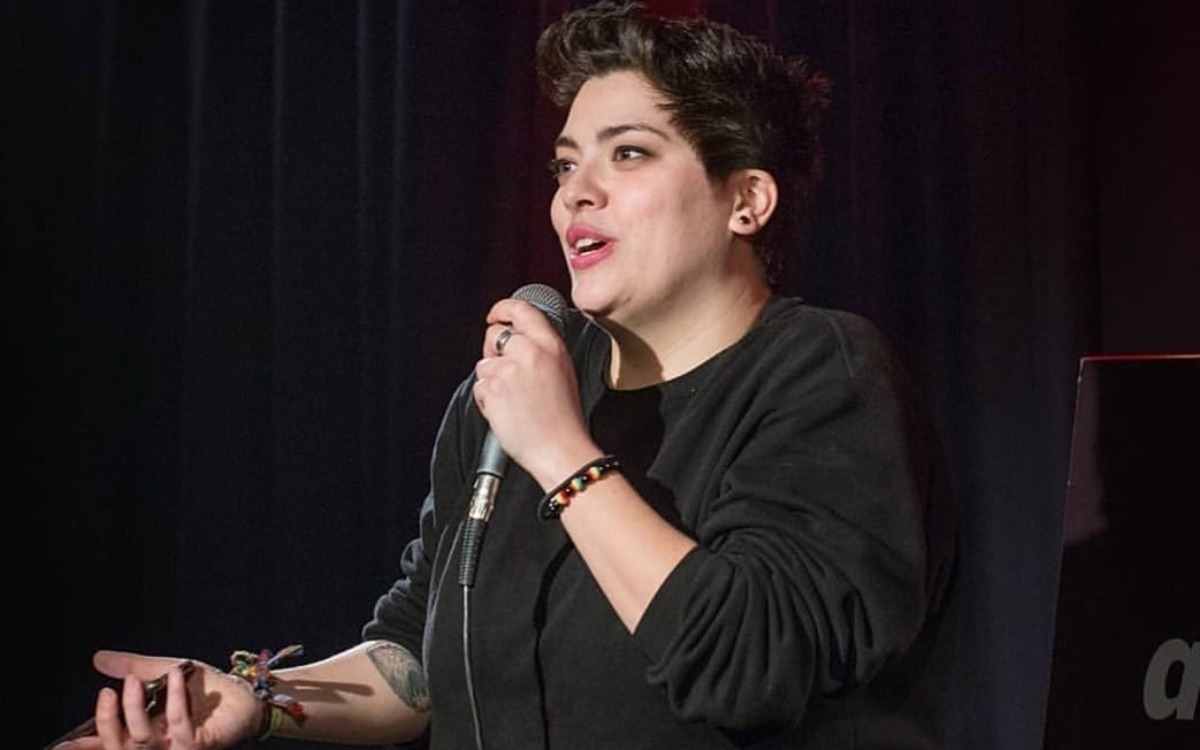 The October 2019 uprising had not yet sparked.

The economy was still tolerable, and one of the hottest issues in the headlines was the cancellation of Mashrou Leila’s concert at the Byblos International Festival due to pressure from Christian parties.

Following the announcement that the concert was called off, a large party was organized to stand in solidarity with the band, with many artists and comedians invited to perform. One such comedian was 28-year-old Shaden Faqih, also known as Shaden Esperanza, who utilizes her shows to not only make people laugh, but to probe political issues as well.

“If you come and try to tell people that there are some things to question in regards to their religion, you use comedy,” Faqih told NOW as she described how she uses her performances to address touchy subjects.

“It’s not easy. People will reject it no matter what. People will feel offended and, in Lebanon, we are easily offended, especially when it comes to religion.”

But offending people has never been a concern for Faqih.

She believes that through comedy, people can help push for change by making others laugh about taboos, and engaging in conversations that they never thought they would have before.

She had gone on a journey of self-discovery before she knew she could really take the stage.

Raised by revolutionary, progressive, left-wing parents, Faqih recounted that she has always been fearlessly and innately political. Her parents taught her that is “what we did, whenever we thought something was wrong, we pointed it out, we talked about it, we didn’t keep quiet and that’s what my parents passed on to me this stamina to keep fighting and working for change.”

Long before the start of her comedy career, at just 12 years old, Faqih’s questions about her sexuality began to surface after watching a queer film. As her self-questioning grew in intensity,  her anxiety peaked each time she would blow out the candles on her birthday cakes.  From her 15th birthday until her 19th birthday she had one wish in mind: to not be gay. It meant suffering and marginalization in a society that punishes and excludes the non-conforming.

But when she was 19, while in university, she met a girl on a basketball team who she fell in love with. While the two never dated, she says it became the point where she finally started to accept her own sexuality.

Soon after, Faqih came out to her parents. Her sister had also come out as gay when she was 16. Her mother panicked over the idea of having two gay daughters. Her father had a much stronger reaction, outright stating that this was the wrong path for her.

Despite her father’s response, her mother was quick to intervene and make sure the two girls were in a safe and accepting environment with no one allowed to interfere in their personal lives.

“Sometimes family members will have something to say and that’s ok,” Faqih explained. “We can have intellectual discussions and accept that we have different opinions but no one can tell us not to be queer. It just makes no sense. And now, as adults, both my sister and I put our own boundaries with family members”.

While she came to terms with her queer identity, Faqih had no idea that she would go into comedy until one fateful night in 2017.

During a pride-themed pub night, Faqih was attending a Cliffhangers comedy storytelling event where five speakers would tell stories to an audience.

When the storytelling was over, the floor was open for anyone to go up and perform or tell a story. So she did.

For 20 minutes, Faqih told the audience her coming-out story. The audience cracked up, to her surprise.

The organizers were so impressed with her routine that they eventually reached out to the newly budding comedian and asked her to be a regular part of the show. Faqih was quick to accept and began writing 1o minute sketches.

It was not until an NGO asked her to be part of their HIV de-stigmatization campaign event the same year that she truly saw what her future as a full-time stand-up comedian would look like.

She had to perform a 30-minute routine, but soon after agreeing her anxiety started to kick in.

“I was having so many second thoughts,” the comedian recalled. “I had never done stand-up comedy before! I always just went up a few times and told some funny stories.”

Despite her fears, the show was a huge success and she began performing increasingly longer shows at events in pubs.

“I am where I am today because people believed in me,” she added. “They saw something in me, believed in it, and pushed me to work on it. These people were the small flame that ignited this fire inside me, this fire that is my passion and now my career”.

However, not everyone received her humor online positively, including the Lebanese General Directorate of the General Security, which is in charge of making sure anything artistic happening in Lebanon complies with the state sanctioned rules of propriety and “decency”.

In early 2021, Faqih posted a video on Instagram criticizing the government’s 5 pm curfew as part of its national Covid restrictions.

The video has her calling the General Security and asking them if they can get her sanitary pads as she was on her period and it was already 5 pm so she could not leave her home.

“The criticism of these stupid regulations was obvious,” she stated. “But of course they took it personally, and the fact that I mentioned a feminine ‘girly topic’ probably hurt their fragile male ego that can’t tolerate such topics.”

“Probably the whole prestige and status of the government collapsed because of this one call,” Faqih joked.

It did not take long for the security forces to call her in for questioning, something she described as “a banal reason for calling me in.”

In the end, Faqih did not face any repercussions and refused to sign any forms that would forbid her from doing things in the future and would not take down any of her posts on social media.

However, there were moments when the investigation became seriously uncomfortable with the investigator occasionally making inappropriate remarks towards her sexuality.

Despite her trouble with the authorities, Faqih explained that political activism has always been second nature to her, citing a moment when she was 12 and held a banner in support of civil marriage in Lebanon.

“For me standing up for what’s wrong has always been effortless,” she said.

“I don’t call it activism because it feels so natural to me. Me being a non-traditional woman especially contributed to my suffering as I could feel the unfairness more intensely and how do you keep quiet? You witness all the unfairness happening around you, all the harassment, the racism, of course, you’re going to fight! This is how I was raised and this is how I continue to be.”

Because of this deeply rooted belief, Faqih saw comedy as another tool for combatting what she saw as negative aspects of Lebanese society, adding that in her comedy, nothing was off-limits.

“There’s nowhere that I won’t go, no line that I won’t cross,” Faqih explained. “Humor for me is a way to convey a message that our harsh society wouldn’t have understood otherwise.”

While comedy might not solve all of the problems in society, it is able to act as a conversation starter so that it might lead to a real solution.

“This helps me a lot to see people wanting to talk about taboo topics, who no longer want to stay silent,” she stated. “We’re moving from a silent society to a more open one where people are revealing their desires to speak up more often and participate in this social change and this outweighs all the negatives for me.”

One topic that Faqih is hoping to delve into is mental health. She has her own story to inspire her.

When she was 14, she was diagnosed with OCD and her mother was quick to get her help.

Because of this experience, Faqih has gotten involved with helping others who are facing mental health or learning challenges.

In addition to her OCD, she has dealt with anxiety as her comedy became more successful and got more attention from the public, but also from state security agencies. However, she insists that she will not let her stardom impact her life, making sure that she stays rooted in the society that supports her.

“I mean it is a strange idea that a lot of people know you but you don’t know them,” Faqih said. “But I think with time you’ll process it and I’m going to my psychologist next week so we can work on tackling this issue.”

The economic crisis, though, has made making a living as a comedian much harder, especially with the  Covid-19 restrictions that added to the hurdles.

For Faqih, this situation presents an opportunity for artists and comedians to come together and build a strong community that supports its members.

“We as artists and as comedians, we are creating something new in Lebanon,” she stated. “Even though this field of comedy existed before in Lebanon, now we’re developing it more. We’re building a community. A place for change to happen. So the question isn’t is there a future for comedy? The question is if there is a future for this country?”

Faqih explained that she and many others are hoping to use their skills to better society and to try to replace the current broken system because ” if the system won’t provide, we provide for ourselves.”

There has been some progress, Faqih noted, specifically when it comes to LGBTQ+ acceptance and the increase in concern over feminist issues.“And that’s what keeps you here!” she exclaimed.

“That’s why you can’t leave! You remain hooked to this country because you’re witnessing change happening right in front of your eyes. You’re witnessing people protesting against the kafala system, racism, homophobia, etc. You’re seeing actual results in members of society even if not in the actual system but nevertheless, how can you let go of that? You can’t. It keeps you going.”