This is what Lebanese bankers may be doing in Geneva. 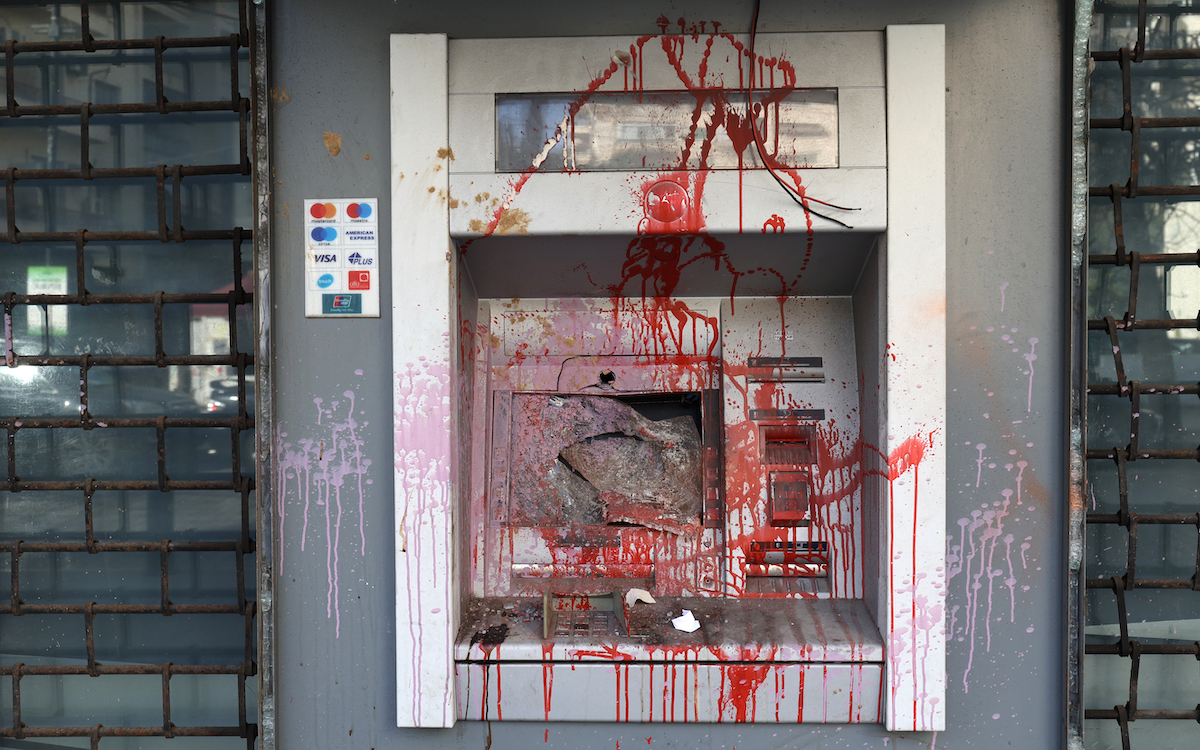 A picture shows the vandalised ATM of a bank in the Lebanese capital Beirut on February 18, 2022. - Once the crown jewel in the economy, Lebanon's banks are closing branches and laying off en masse, resizing to the bleak reality of the crisis they are widely blamed for. Photo: Anwar Amro, AFP

If you so happen to work in the asset management and venture capital business like I do, you may have encountered a new phenomenon in Switzerland.

My asset managers smile with glee when I tell them that I’ve just returned from Beirut, where I was fundraising capital.

They are somewhat surprised why I waste my time going to Beirut rather than coming directly to them to Switzerland.

It is not surprising that the Lebanese crisis was a big opportunity for Swiss asset managers, in the same way the Ukraine-Russia war is.  Whenever there is trouble somewhere in the world, money always finds safety in Switzerland with independent asset managers.

It is estimated that there are approximately 2500 of them in the country.

An independent asset manager (IAM) is a wealth management service that is not operated by a commercial bank. They are also referred to as external asset managers. These independent asset managers are not banks, but they make use of banking services, such as bank accounts and custody accounts, to hold and invest their clients’ wealth. The clients’ money might be domiciled in any other country, not necessarily in Switzerland, but Switzerland acts as the physical location where the investment decisions are made and portfolios are managed.

Asset management can thus be described as follows:

Asset managers maintain an intermediary function with a fiduciary responsibility and manage collective investment schemes and institutional discretionary mandates on behalf and in the best interest of their clients, in exchange for a fee.

The physical money can be in a bank in Switzerland, Russia, UAE,  or any country, but custody of the account is given to the asset manager.

In 2020, Asset UnderManagement (AuM) – the total market value of the investments that a person or entity handles on behalf of investors – in Switzerland increased by 10.6 percent to a record 2.79 trillion Swiss Francs (CHF) due to high net inflows and recovering financial markets in Quarter two and Quarter three of 2020, according to the latest study by the Asset Management Association of Switzerland.

Net inflows of 100 billion CHF across all asset classes and segments boosted AuM by 4 percent.  The net revenue pool of the Swiss asset management industry is estimated to be 15.67 billion CHF with profits of 4.10 billion CHF.

The largest asset management companies can manage up to 50 billion CHF, medium-sized AuM 10 to 50 billion, and the smallest firms AuM less than 10 billion.

Up until 2020, the industry was less regulated by FINMA, the Swiss regularity authority, than the banking sector was. The new Financial Institutions Act (FinIA or the Act) entered into force on 1 January 2020.  This Act regulates the supervision of financial institutions’ independent asset managers (IAM).  A lot of money that was managed by the IAM moved under the radar of the regulatory authorities, but since 2020 regulators started asking asset managers for more information.

Until today, only 10 percent of the total asset managers have complied with the Swiss Financial Market Supervisory Authority (FINMA) queries and regulations, a Geneva lawyer told me. The lack of transparency raises many questions about the source of money in IAM.

It is a fact that a lot of the Lebanese money that fled the Lebanese banking sector ended up being managed by such IAM. Many report that the largest flow of money from Lebanon occurred right before 2019, when the financial system crashed in the country.

It is not at all surprising. Most likely, the people “in the know” and the financially savvy would have fled long before October 2019.  In fact, some of those asset managers reported that many of their Lebanese clients came in 2017-2018, when the educated eye would have foreseen the looming disaster.

Why am I not surprised to bump into Lebanese bankers trying to buy IAM in Switzerland? As a good friend once told me, “mehwar and dollar don’t mix.” … For years, Lebanese banks did banking in a highly dollarized economy maintained but the central bank’s policy to peg the local currency to the US$. But dollars started to disappear from the Lebanese economy with the rising power of what many call political Shiism, following Hezbollah’s military success in neighboring Syria, which made it the dominant political force in Beirut.

The Lebanese capital owners saw the dangers and went abroad to try and relocate their assets.

A reverse ownership of failed banks is one thought that comes to mind. Another reason for the buyouts is that, since Lebanese banks are now acting as foreign currency (forex) dealers in Lebanon, and not making much margin, the reclaiming of the high margin private banking business could be a way to rebuild a business in the future.

Where there are no dollars, banking as an industry dies.  Neither trade nor trading can survive an economy with no access to dollars (or foreign currency).

So, what we could be witnessing is a rising phoenix sitting out of the trouble and waiting for the right geopolitical circumstances to come back to life. It’s not easy to kill a Lebanese banker. They have 9 lives and entrepreneurial skills formed in one of the most difficult and uncertain business and financial environments in the world. If there is a way, they will find it.