More than half of all registered voters on national average, and up to two-thirds in Tripoli, did not cast their ballots. Abstention, rather than voting, tells the real story of the Lebanese people, experts say. 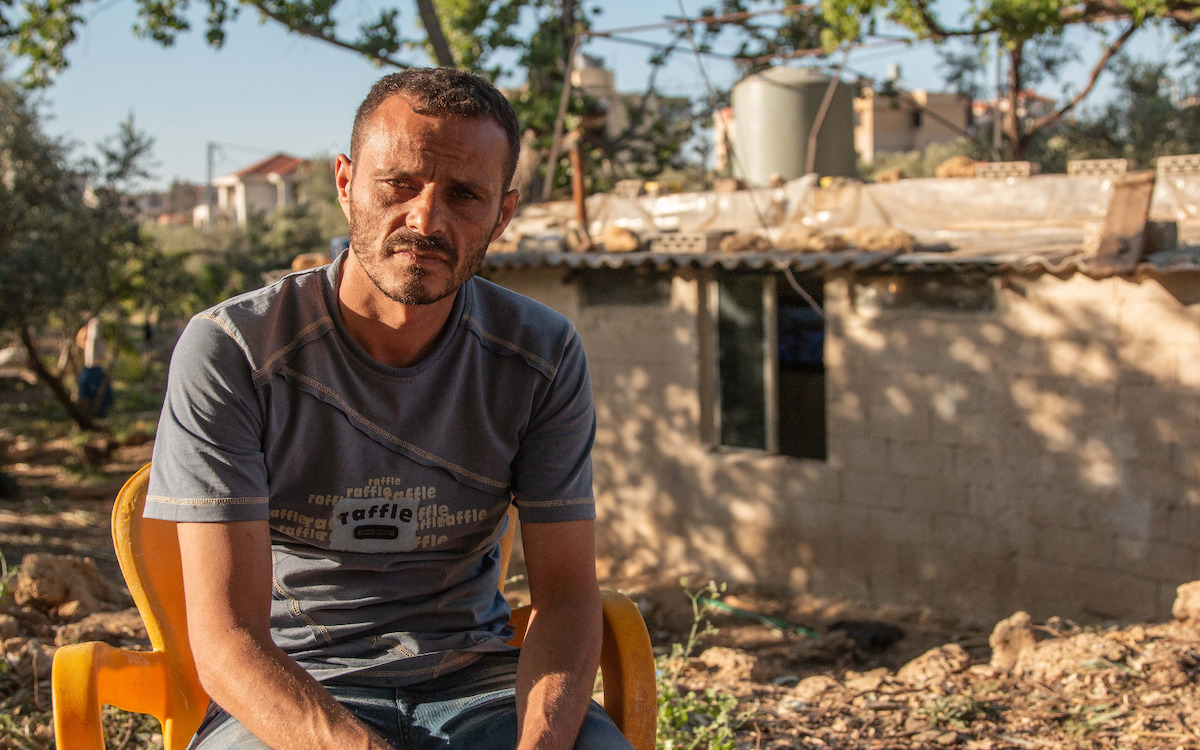 Around 59 percent of eligible voters did not take part in Lebanon's recent elections after years of false promises and disillusionment with the political system. Photo: Philippe Pernot, NOW

“The only thing I have left is my dignity,“ said Ahmad Hussein Jalad, sitting on a plastic chair next to his tin house in Koura. Around him, the olive trees cast shadows as the sun begins to set.

“That’s why I refused the $200 the Syrian Socialist Nationalist Party wanted to buy my vote with,” stated the 35-year-old father of six. “And why I abstained from voting” in the 2022 Lebanese general election, he added.

Unemployed as the crisis deepened, Jalad, who once made a living restoring the façades of buildings, was forced to sell his house and all his belongings. He and his family now live in fields belonging to a wealthy family who left for a better life abroad. Their villa remains empty while Jalad’s family occupies a shack beside the orchards.

“We survive every day only thanks to what the soil offers us. Mainly some olives and vegetables, it’s not much”, he said. Finding work has proven impossible as of late, and Jalal is looking to go to Cyprus, potentially by taking the dangerous journey by boat with a smuggler, and, one day, to Canada.

“Neither the state nor the parties have ever done anything for me, or for the people I know,” he insisted, shaking his head.

Jalad spoke out of experience. He had gone through a costly knee operation, and his sister is battling cancer. The bill for her medication reaches 3.5 million Lira ($120 at the unofficial rate) every two weeks, yet they receive no help from anyone. “She stopped taking medication two months ago, we cannot pay for them,” he said sadly.

“Why would I vote for a state that does this to its people,” wondered Jalal. “All the politicians are liars, they offer us some money now but ignore us the rest of the year,” he said with both anger and lassitude in his voice.

Jalal’s family counts 75 voters – all of them boycotted the elections. They were part of the 59 percent of Lebanese who did not cast their ballots in the 2022 general elections, almost 10 percent more than in 2018.

A campaign disconnected from basic needs

“Honestly, the electoral campaigns seemed totally eccentric for the majority, who suffer from hunger,” said Pascale Asmar, an independent researcher and political analyst. Instead of proposing concrete measures to alleviate the crisis and address its social effects, political parties offered bribes and, in some cases, covered food, gas, fuel or medical bills in exchange for votes.

“Although all the political leaders, religious figures and intellectuals tried to convince people of the importance of this election, it just didn’t fit with their reality,” she said.

“The electoral campaign was basically designed as a clash of identities between the Hezbollah and the Lebanese Forces,” said Asmar. For her, this geopolitical game proved to be “disconnected” from the basic needs of most Lebanese.

The economic crisis was another reason for the 10-percent increase in abstention, Asmar believes. “Many people had to work to survive or couldn’t afford the gas to head to their voting station,” she explained.

Statistically, poorer segments of the population tended to vote less than wealthier ones, apart from if they received cash for votes. As the Lebanese middle class has virtually disappeared, abstention may have risen. But no comprehensive statistics on social class particularly regarding the elections have been collected in Lebanon yet, as the sectarian divide attracts most attention in political research.

A Sunni electorate torn between protest and abstention

Another factor for the high percentage of voting abstention could have been the withdrawal of Saad Hariri, ex-PM and leader of the Sunni Future party, from the elections. Although it is too early to establish exact numbers, political analyst Khaldoun el-Sharif believes that Hariri’s calls to boycott the elections may have negatively affected Sunni turnout, especially in the North.

“The community was torn apart by Hariri’s decision,” he said. It is clear that many of those who voted condemned the actual political class.

In Tripoli, Fouad Siniora’s candidate was rejected, just as Faisal Karame lost his seat in Parliament and Mustapha Allouch, the former vice president of the Future Movement was unable to win enough votes despite Tripoli being a traditionally Future Movement stronghold – and Prime Minister Najib Mikati’s list faired poorer than in previous elections.

Yet el-Sharif believes that many were indecisive about how to protest. “The Sunnis throughout Lebanon voted against the ruling political class while maintaining Hezbollah at large,” he explained.

For him, this illustrates why some chose Rifi, former minister of justice and known critic of the Iranian axis, while others backed an independent candidate from the Revolt for Justice and Sovereignty list.

No political party harnessed this anger and translated it into the campaign.

The rest abstained, most following Hariri’s orders. In Beirut, some who protested the vote did so by setting up swimming pools in the street during election day to express their intention of boycotting the elections.

“Another factor is that, in Tripoli, many people never voted out of conviction, but out of economic necessity,” el-Sharif said. The bribes and gifts given out by political parties did harness some importance in the poorest city of the Mediterranean coast. With the crisis, these bribes shrank, contributing to “a small percentage of non-voters,” he believes.

Ironically, another major cause of abstention in Tripoli and the North may have been its revolutionary tension, Asmar believes. For her, “a huge anger still boils” in this impoverished city.

During the 2019 uprisings, the second largest city of Lebanon gained herself the nickname of “Bride of the revolution,” as thousands took to the streets to protest the political establishment and decades of corruption. Banks and government buildings were burnt down as years of marginalization and despair exploded.

“But no political party harnessed this anger and translated it into the campaign,” Asmar said. It could have led to higher participation in the elections, yet the opposite happened.

“The opposition lists were not only incapable of uniting, but they were disconnected from most of the population,” she believes.

Representative democracy is a luxury that most people never have had.

Between their academic language, middle- or upper-class candidates, and quite liberal programs, they have been unable to represent the Tripolitan streets. “Most Tripolitans didn’t trust anyone, since no one addresses their historic marginalization,” Asmar explained.

Before the creation of Lebanon by the French mandate in 1923, Tripoli was a thriving and independent city inside the Ottoman Empire. The “Venice of the Middle-East” boasted numerous schools, a tram and a bustling cultural life with over 41 cinemas.

“Its annexation into Lebanon has dealt a blow to the city, and still today, most Tripolitans don’t feel like they belong to Lebanon,” Asmar said.

Indeed, decades of centralization and civil war have led to Tripoli progressively losing its importance and plunging into widespread poverty.

It is not a coincidence that many of Lebanon’s richest men, including Mikati, come from the “Capital of the North.” Using the city’s resources for their personal wealth, they harnessed business interests and state power. At the same time, Mikati and Hariri implemented neoliberal policies such as the development of gated communities around the Maarad area at the expense of the old city, a “poverty trap.”

“Why would Tripolitans vote for a state which has marginalized them and for a country which has abandoned them,” asks Asmar? “They believe that elections will not change anything for them, and they are quite right.”

The crisis of representation

Tripoli is not alone in this widespread refusal of elections. There is a more profound malaise at the root of abstention. “In the whole history of Lebanon, participation has never exceeded 50 percent, on average,” explained el-Sharif.

For him, Lebanese people are very interested in politics, and their abstention is not a sign of indifference nor of apathy. “But they have been trained to place geopolitics and partisan issues above their own interests,” he says. This phenomenon would fuel high abstention levels since politics then appear as a game between superpowers.

Above all, “there is a widespread resentment against the whole political structure as it has been built over decades,” the analyst explained. Many feel that whoever will come to power is decided well before the elections, which then serve to legitimize their domination.

Asmar agrees: elections are nothing more than a “democratic façade” to the sectarian and tribal system in place, she said.

Although believing in a strong savior is common, Asmar thinks that more direct and participatory forms of democracy would enable citizens to engage more actively. She advocates putting basic needs and everyday preoccupations at the heart of politics.

“Representative democracy is a luxury that most people never have had,” she said.

Back in Koura, Jalad shares this view. The alternative lists did not convince him for this exact reason.