With Lebanon’s banks being replaced by a corrupt cash economy, the steps to reform the system have been slow and ineffective, carried out by a political class that has little interest in changing the status quo. 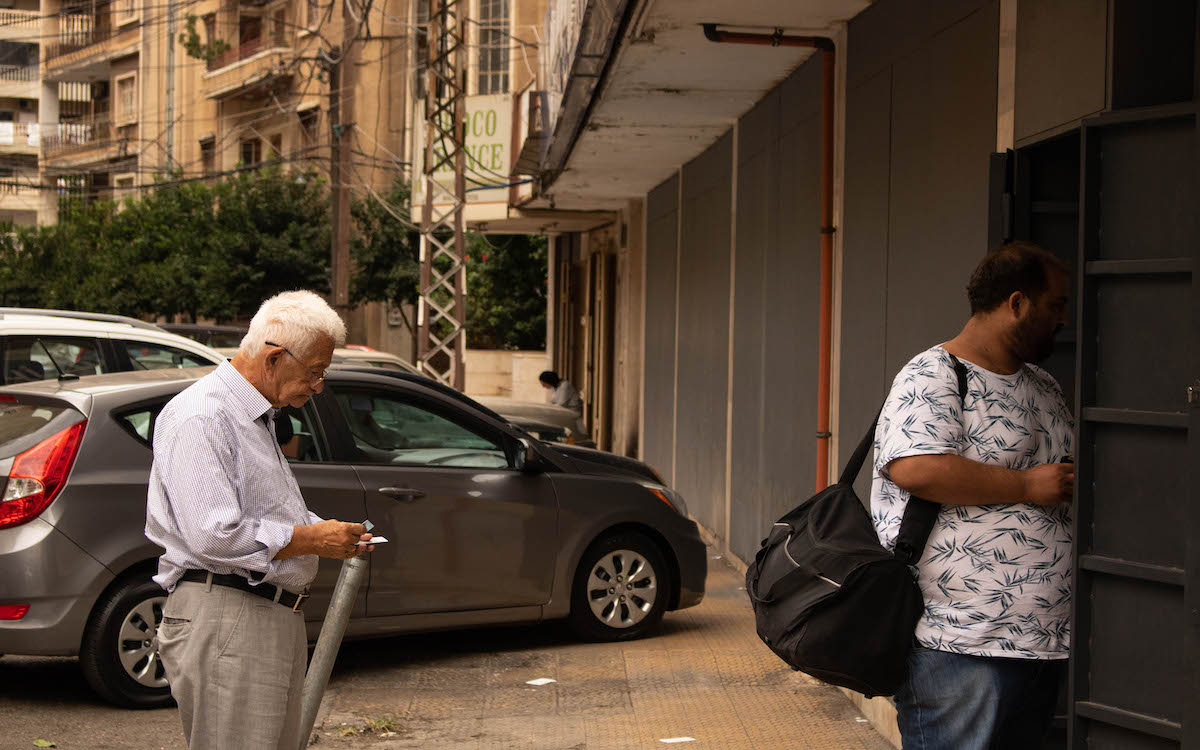 Depositors at a bank in Tripoli wait to use an ATM after the banks closed indefinitely. Depositors are limited as to how much money they can withdraw from their accounts each month after the banks implemented informal capital control laws as the politicians continued to fail to pass their own. Photo: Nicholas Frakes, NOW

In the first part of the “Unbanked” series, we were able to put numbers to the size of the cash economy and show who is profiting from the growth of the new alternative economy.  It was apparent that a listed American financial institution, Western Union, through its master agent in Lebanon OMT, is entangled in the lawlessness of the cash economy that is making Lebanese people and businesses suffer countrywide.  The cash remittances system has recently become infiltrated by the militia and the mafia.

Through its master agents in Lebanon, OMT and Bob Finance, Western Union has been tied directly to the Central Bank of Lebanon’s (BDL) corruption scheme, which is used to suck out dollars from the Lebanese market for a fixed fee of three percent to those two companies.  Ctex, Hassan’s Moukalled company, a close ally of Parliamentary Speaker Nabih Berri, in this case, is also involved in the BDL corruption scheme.

On October 12, the Central Bank announced that it would halt these operations. The dollar lira rate dropped from 40,000 to 34,000LL. But on November 7, the Central Bank announced it would once again begin the buying, hence the three-percent payment to OMT, BOB finance, and Ctex would continue – back to business as usual.  The three percent fee paid on the amount of dollars collected by those dealers is most probably paid out from the Central Bank’s reserves – or what is left of depositors’ money. The robbery continues!

If becoming “unbanked” brought about an alternative cash system which mired in corruption and funding terrorist organizations and sanctioned individuals – then what is keeping us “unbanked”?

Since signing off on the Staff Level Agreement (SLA) with the International Monetary Fund (IMF) in April 2022, Lebanon’s politicians were tasked to deliver five types of reforms in order for the IMF to proceed with a bail-out program for Lebanon.

The five reforms demanded the deliverance of a capital control law, a budget for 2022, passing anti-money laundering measures, reforms on the banking secrecy act, and a banking sector restructuring law.

First off,  It did not come as part of a whole approach to a financial recovery scheme, and so was unknown on what basis it is being produced.

It gave arbitrary powers to a committee headed by the governor of the Central Bank to decide on the transfers of money to certain industries and exempted individuals. This can facilitate political favors. It keeps the power to transfer money out with the Governor, mainly. This law would come under the Governor’s control and the Central Bank’simplementation.

At first glance, the text of the law provided legal cover for banks to justify their previous illegal actions towards depositors. This means that nobody can sue the banks. It prevents depositors from taking legal action to reclaim their deposits.

Such a flawed capital control law that protects the banks at the expense of depositors is a cover for the corruption of those in charge of the finance ministry. Also, by keeping arbitrary power in the hands of the governor of the Central Bank and the politically appointed committee with no clear process on how it is being appointed, we are sent back to the black hole of the Central Bank, where the original sin started and depositors’ money disappeared.

The topic of capital control laws has been discussed in Parliament for over two years without being presented as a draft for the banking restructuring law. Ideally, you apply a capital control law to manage the flow of capital while a solution is drafted to deal with the locked deposits. In this case, a solution for the locked deposits has not been drafted.

While this law is a necessity, any serious reforms would ensure this goes hand in hand with a banking restructuring law.

The budget was drafted by  Finance Minister Yousef Khalil and his team, with close follow-up from Saade el Chami, who is the key interlocutor with the IMF.

The 2022 Budget was written with fictitious numbers without a clear indication of which exchange rate is to be used. It included assumptions on increased customs and taxes that have not been collected for many years due to corruption and mismanagement.

Such numbers are put down to justify a lower level of deficit, misleading the IMF as well as the public.  Saade el Chami claimed that the IMF has promised to bridge the budget deficit gap, encouraging parliamentarians to hurry up and vote on arbitrary numbers.

To cover the budget gap or deficit, money will have to be printed, causing an inflationary effect and a further devaluation of the Lebanese lira.

What we saw, in this case, was legislation being forced through the system under the context of an IMF requirement, the result of which could have a disastrous effect on the economy.

By applying pressure to force the hands of MPs to pass this legislation, Saade el Chami is using the IMF as a cover to mask the corruption of the party managing the finance ministry, at the same time giving them a veneer of legitimacy. By following in Mikati’s corrupt principles, el Chami is doing his dirty work and misleading the public and the IMF into believing that these are reforms that are providing solutions, but they are, in fact, far from it.

When the budget arrived at the Finance and Budget Committee, the committee refused to pass it, or even vote on it. The committee cited the inaccuracy of the numbers due to the multiple exchange rates used to predict revenue and expenditure, but the General Assembly stepped in and voted on the budget regardless, ignoring the comments of the committee.

The budget managed to pass in parliament on September 26, with all MPs interviewed agreeing that it is undeliverable.

It was presented to Parliament with several holes in it. One being that it allows the political appointees in government and judiciary to gain access to people’s accounts indiscriminately, without checks and balances, and without the existence of a data protection act that protects depositors’ personal data from being published.

In the absence of a data protection act and an independent judiciary system, the draft law could expose people to blackmail by public sector employees loyal to the ruling parties in government and lead to a witch-hunt of the political opposition.

While the lifting of banking secrecy is extremely important to improve tax collection and increase accountability and transparency, it is equally important to protect the general public from abuse by the very people who are tasked to carry out the implementation of the law.

When Switzerland removed banking secrecy from international accounts in 2018, they had data protection acts in place which were then phased out over many years.

After nearly a year of negotiations, the bank secrecy law was finally delivered in parliament on October 19. In response to the law, the IMF said that the amendments that were adopted “represent a substantial reform of banking secrecy regime in Lebanon, bringing it closer to international standards and global practices.”

The banking sector restructuring law has not yet been sent to parliament. However, it is being written by Saade el Chami, Youssef Khalil, and BDL advisors, which are to be reviewed by IMF.  The team is late in issuing drafts to parliament.

Finally, there is the government’s economic recovery plan. The laws discussed should come as part of a general economic recovery plan. However, they have been arriving to parliament on an ad hoc basis, without any ties to a recovery plan.  Many of the parliamentarians interviewed confirmed they were left confused with the manner in which the reforms are being dissected and sent to Parliament without any ties to a plan. Hence, it is difficult to understand on what basis they had been making amendments.

The first economic recovery plan was drafted in 2020, while Hassan Diab’s government was in power, with the help of the financial advisory firm Lazard. The following Mikati government redrafted the old plan based on the IMF Staff Level Agreement (SLA), modified it in due course, and resubmitted it to the Finance and Budget Committee in multiple versions. Three copies of the Economic Recovery Plan have been received by MPs in the Finance Committee since the start of the crisis.

It becomes clearer that the corruption in the successive governments controlled by Hezbollah, Amal Movement, and their allies, in collaboration with BDL, are voiding the reforms of their intended content.

This doesn’t mean Parliament is blocking it, it means that incompetent, corrupt people in power are trying to carry on with business as usual.  The IMF program is being used to push reforms at fiscal and monetary levels without coupling them with political and public sector reforms. The Lebanese people and institutions are left exposed to a corrupt public administration in total control of their fate.

The corrupt administration that handles the finance ministry is Speaker of Parliament Nabih Berri’s Amal Movement. They and their allies, Hezbollah, have had a grip on the Lebanese Finance Ministry for years. It is impossible to believe that they are capable of reform in light of the sanctions Hezbollah is under and the blooming cash economy that is feeding them.  To say the least, putting the reforms in the hands of the same people that caused the financial crisis in the first place, and who are enriched by the cash economy is ludicrous.

But what is more astonishing is hearing from the MPs interviewed for this article that although the reforms were held up from the government’s side by drafting and redrafting, when the Finance Committee in Parliament finally gave its blessings and the reforms were submitted to the IMF, the IMF also lingered for months before coming back with notes to the parliamentary committee.

For example, the banking secrecy law took a long time to draft, and much time was lost because the IMF would sometimes take up to three months to ask the committee for additional amendments.

Time is stalled as MPs faced pressure and calls from western embassies not to delay reforms by blocking proposed drafts.

It is only a matter of time before civil society and the general public lose faith entirely in the ability of the IMF program to instigate genuine reforms, and start questioning the need for such a program.