HomePoliticsNewsUnited against the probe
News
NOW

United against the probe

They may often squabble, but Lebanon’s political parties seem united in rejecting the investigation into Beirut’s massive port explosion that they fear could threaten their survival, analysts tell AFP. 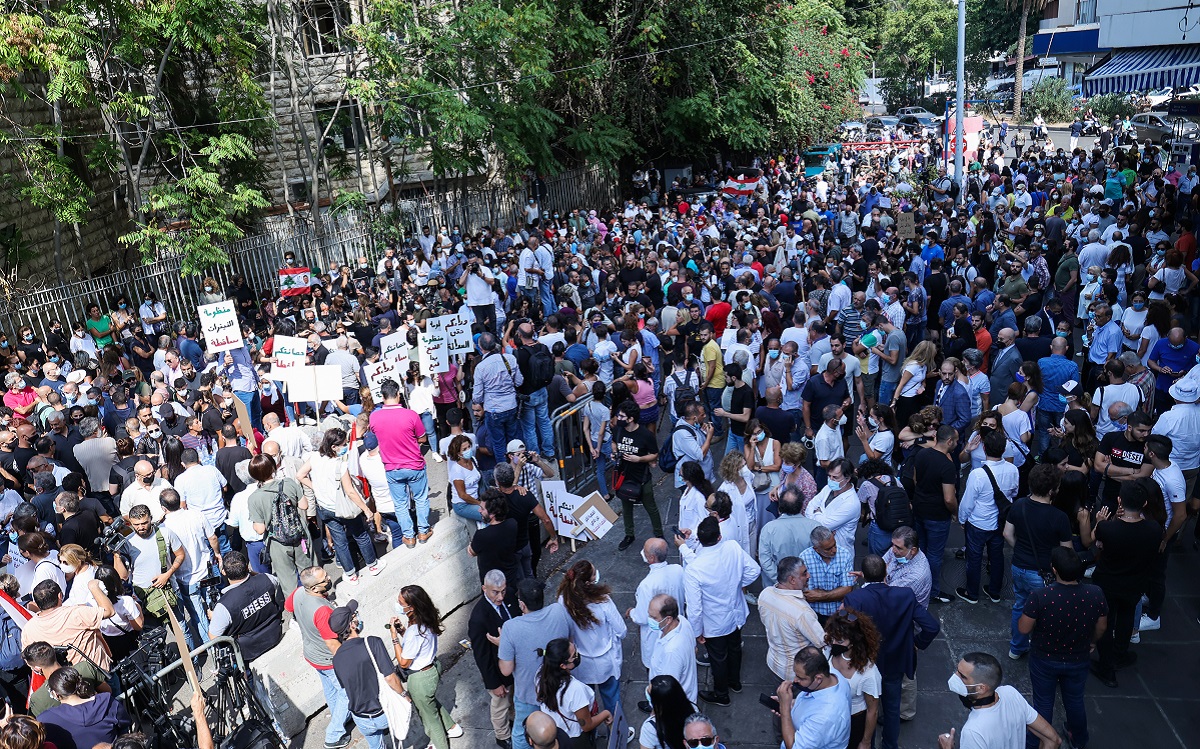 Activists and relatives of victims of the Beirut port explosion demonstrate on September 29, 2021 outside the Lebanese capital's Justice Palace,to protest the suspension of the investigation into the August 4, 2020 port explosion. Photo: Anwar Amro, AFP.

The explosion of a huge stockpile of poorly stored fertilizer on the dockside on August 4, 2020, killed more than 210 people, wounded thousands, and ravaged half the capital.

In the aftermath of mass protests in late 2019 demanding the ouster of the traditional ruling class, many said the disaster was just the latest example of official incompetence and corruption.

But months into a domestic investigation, no one has been held accountable.

Politicians have repeatedly obstructed the work of judge Tarek Bitar by refusing to show up for questioning, filing legal complaints against him or calling for his dismissal, which last week sparked deadly violence in the heart of Beirut.

Analyst Lina Khatib said hopes were fading of holding those responsible for the port blast accountable.

“The ruling class in Lebanon is in agreement about wanting the port probe to be abandoned and they will use all available means to derail it,” said Khatib, director of the Middle East and North Africa program at the Chatham House think tank.

Hezbollah has spearheaded a campaign to remove Bitar, accusing him of political bias.

The debate over his future, which comes after the previous investigator was removed in February, has already triggered the postponement of one cabinet meeting despite the urgency of addressing Lebanon’s acute economic crisis.

A battle for rule of law

Nadim Houry, executive director at the Arab Reform Initiative, said that the whole ruling class felt under threat in what he described as “an essential battle in Lebanon for rule of law”.

“A section of society has decided that they want to go all the way and ask for truth,” but they face “a political class that is willing to use threats, use violence, use even launching into another civil war to prevent that quest for truth from leading to a result,” he said.

It emerged after the port blast that officials had known that hundreds of tons of ammonium nitrate had for years been left to linger in a warehouse near residential neighborhoods.

Families of the victims see in Bitar the only hope for justice in a country where impunity has long been the norm.

After the 1975 to 1990 civil war, Lebanon issued a broad amnesty that benefited the country’s warlords, allowing many of them to become political leaders.

“Regardless of what Bitar finds, it’s the idea itself that any of them can somehow be held accountable that they are resisting,” Houry said.

Any success in the blast probe would set a precedent and unravel an “impunity regime” under which each party agrees not to pursue the other for its crimes, as long as it is not targeted itself.

Tensions came to a boil last week after a rally against Bitar organized by Hezbollah and its Shiite ally Amal descended into violence that killed seven of their supporters.

A price too high

The sound of gunfire and rocket-propelled grenades trapped residents indoors for hours, reviving memories of the civil war.

Hezbollah accused snipers of the Lebanese Forces, a Christian party, of causing the bloodshed, but the latter has denied this.

The army, meanwhile, is investigating a video circulated on social media that appears to show a soldier shooting at protesters.

“Hezbollah is increasingly acting as the praetorian guard of the regime that has come into place since the 1990s,” Houry said.

The Iran-backed movement, the only one not to have disarmed after the civil war, is at least partly blacklisted by most Western governments but holds seats in parliament.

While political parties have publicly supported an investigation, analysts say they ultimately wish to protect their own interests.

“Lebanon’s ruling class may be political opponents but they are united in profiteering from the system… and they, therefore, oppose any steps to reform it or to instill accountability within it,” Khatib said.

A spokesman for the families of blast victims quit on Saturday, after many feared he had been intimidated into toeing the Hezbollah line and calling for Bitar to step down.

Ibrahim Hoteit, who lost his brother in the explosion, lives in a Shiite-majority neighborhood.

The following day, many refrained from taking part in a protest to mark the second anniversary of the now-defunct 2019 protest movement, fearing further violence.

“Ultimately, the ruling class wants to push the Lebanese to conclude that the price of accountability is too high,” Khatib said.