Luna Safwan tells the story of Lebanon’s first case of sexual harassment filed in May 2021 and dwells on what it entails for women to expose their harasser in Lebanon. 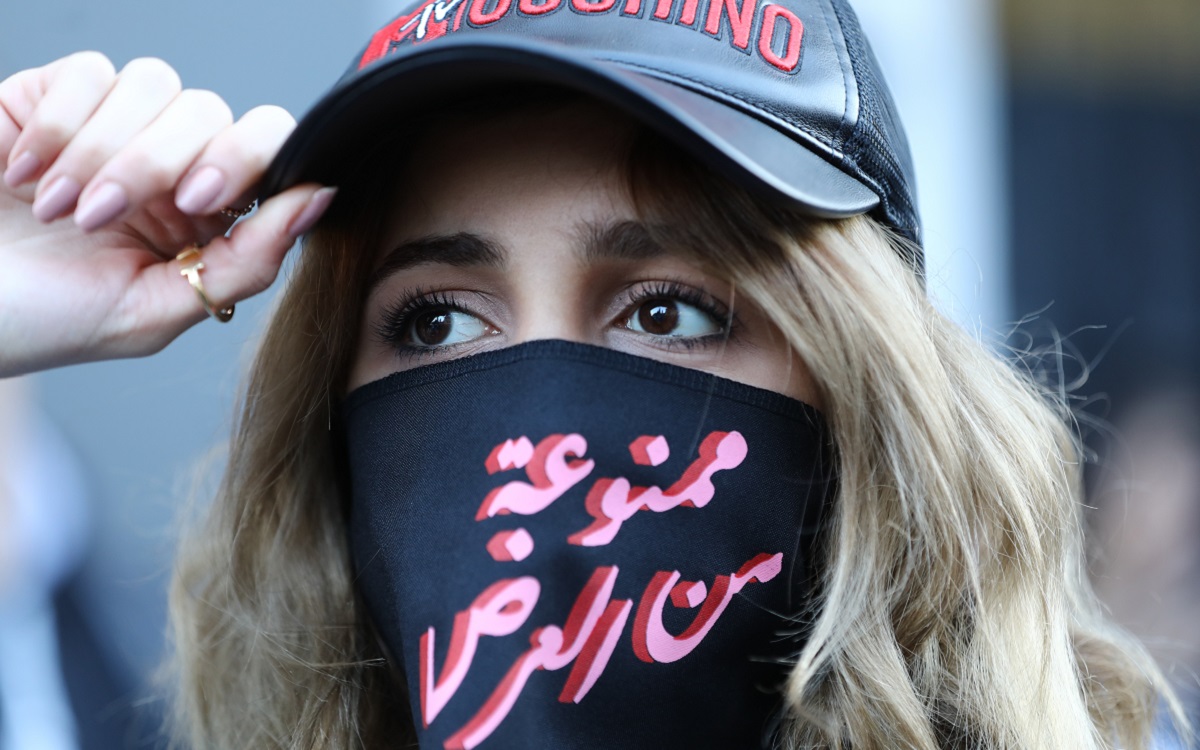 A woman during a march against sexual harassment in Beirut with face mask that says "Not allowed to show myself". Photo: Anwar Amro, AFP.

It was a calm May evening in Beirut. I was surfing my Instagram stories when I stumbled on a story posted by a woman whom I follow but never had any direct contact with.

The story was a screenshot from another woman’s account: she was harassed by a famous Lebanese writer and director and decided to post about it. The woman who shared the screenshot wrote: I hear you. This man harassed me too.

“ME TOO” I screamed in my room, as I felt a deep sense of disgust, fear, confusion, anger taking over. I stood up and started pacing in the house.

He harassed me too, and it took me 5 months to say it out loud. To even admit to myself that I was harassed, which was the most surprising part, given my involvement in the fields of journalism and women rights, and supposedly my knowledge of what harassment is.

But what is harassment? What if I engaged with him too much? Should I even get involved? Don’t I have enough on my plate in Lebanon? What will people say?

“What will people say?”

Yes, I asked myself this question. I never cared about what people say, but harassment is not a simple term that one can juggle around and expect everyone to embrace the story with open arms.

Exposing harassment is a scary thing. You dive into the unknown and hope that people wouldn’t judge you, that you are not stigmatized or looked down upon with pity. You are giving the whole society the permission to formulate opinions about something so personal.

Yet, I could not control my fingers and found myself automatically sending messages to both women: “Can we talk? This man did the same to me”.

In May 2021, 7 Lebanese women did not think of any possible consequences and decided to hold their harasser accountable.

I’m here to tell the story of how 7 Lebanese women outed their harasser on social media, in a society where harassment is still taboo, in a country where criminals rarely get punished or are held accountable for their crimes.

We dared to share our stories, and the snowball only grew bigger after that: a prime-time news anchor, a Lebanese actress, and up to 10 other women said “me too”.

I repeatedly asked him to stop

It all started at the end of 2020. I was an admirer of the work that two Lebanese men, a photojournalist, and a writer/director, were doing: they produced a satire newspaper called October 18 [in reference to the day that followed the October 17 revolution back in 2019].

The newspaper profiled politicians, in sarcastic, yet eloquent Arabic words. The two producers held all Lebanese politicians, including controversial and high-ranked ones – like Nabih Berri, speaker of the Parliament, and Hassan Nasrallah, secretary general of Hezbollah – accountable for what has happened to Lebanon. They shamed them and sometimes the tone made the reader wonder if these producers were even safe in their country. Daring, was how I often described them.

But those men had a different plan, aside from their work on the political activism scene. Their side gig was to try and lure women into dating them, knowing that both of them had life partners. One of them approached me to discuss politics, we shared the same views. Of course, I expressed my admiration for what he and his colleague were doing through the October 18 newspaper. I even shared their work.

But the conversation took a darker turn when I received a picture of the back cover of his book, on which he describes in sexual terms a woman lying in bed. The conversations and connection went downwards from then on. The famous writer would only contact me when he said he was feeling high, or drunk, or to express his sexual frustration.

I repeatedly asked him to stop.

But it never occurred to me that he might have been engaging in the same type of behavior with other women. I eventually decided to remove him from my social media and block his number.

“Why didn’t you do it sooner?” some of you may ask. Well, I didn’t because I was disappointed and wanted to believe that this man was committing the simple mistake of misreading the signs. I wanted to believe that he had good intentions. I did not want to admit that our revolution had produced so many sexual harassers, but the reality is, it has, and he is not the only one.

The decision to expose him publicly came months after these incidents. I kept silent, I only shared my frustration with one friend, sending her the screenshots. I had kept them, but I never imagined that this was happening to others. Not until I saw the Instagram stories of 2 other women mentioning the same man, and describing other methods of harassment and threats that he used.

Sharing our story online was the beginning of what could be described as an avalanche. I have never met women who were as courageous as the women I met in May 2021. Hours after sharing our testimonies online, we all met in person for the first time to tell our stories to the lawyers. It was emotional and draining.

My story was nothing compared to what he had done to others. From stalking, to mad midnight phone calls, to threats. He lured one of the women to his house to “read her work” only to end up assaulting her.

The room was getting darker with every shared testimony. There were also moments of painful silence. There were moments when I wanted to close my eyes and stop listening. But they, the women, were not ashamed.  They were confused. They were not scared, but uncomfortable.

The only way we, women, can help each other is by talking, sharing our experiences, warning others. That’s our only way when everything else fails in this region.

And with every passing hour, we started receiving more testimonies and screenshots from women who did not want to go public, but who had the same encounters with the same man.

It was time to make a decision: what are we going to do next? Are we really doing this?

As we waited for the lawyers’ calls and advice, my phone rang on a Wednesday morning and a man introduced himself to be a policeman in the local Hobeish Police station – the Beirut vice squad. He asked me to come down to the station to give a testimony because the general prosecutor wanted to bring our case to court.

I was surprised. In my 30 years in Lebanon, I only witnessed impunity, people getting away with their crimes and with murder. Justice was rare in my country.

We never had high hopes of justice when we made our case public. We only wanted to be heard and to warn other women about this harasser. The only way we, women, can help each other is by talking, sharing our experiences, warning others. That’s our only way when everything else fails in this region.

The longest 5 hours of my life

At the local police station where we waited with our lawyer for our turn to give our witness accounts, men were being brought in with handcuffs. Social workers visited women imprisoned in the police station.

In the “anti-trafficking and protection of the morals” security forces bureau, I spent what seemed to be the longest 5 hours of my life, waiting for my turn to give my testimony to two men, the investigator lieutenant and the registrar.

It’s where every aspect of your life is put under the microscope: your last interactions with the accused, if you had any sexual intercourse with him, every piece of conversation and evidence is presented, your whole data laid out there, your privacy, your life, your whole being. Every detail you mention, no matter how uncomfortable, matters.

I was the last to give my testimony and the last to leave the station. Outside, my father had been waiting in his car for 5 hours without being able to contact me. I wanted to hug him and apologize for all of this.

Even though I was the victim, I somehow still found a way to blame myself for causing all this trouble. I spent the next few days avoiding my parents, I was ashamed.  But of what? That is something I’m still unable to answer.

Even though my family was so supportive and proud, I knew how painful it was for them to watch me being slandered online by the harasser, and then having to spend hours in a police station which its reputation precedes, a station that if you enter as a woman, could stigmatize you forever.

Even though I was the victim, I somehow still found a way to blame myself for causing all this trouble. I spent the next few days avoiding my parents, I was ashamed.  But of what? That is something I’m still unable to answer.

But we did it anyway, we brought our harasser to court in the last weeks of 2021, despite the trial being postponed.

I faced him in front of the justice palace in Beirut for the first time. After months of threats and accusations, he showed up and so did I.

This is our story, the group of Lebanese women who sued someone for harassment for the first time in Lebanon. It’s about what it means to gather your courage and speak up . It’s a piece about harassment, the fear of admitting to having been a victim of harassment, what helped us share our experiences, how we took it to court, our support network, the harassment law that we are now testing in Lebanon.

It’s about what it means to expose your harasser, realistically, and the things he did to try and silence us: from sharing private information about us to fabricating stories of events that never happened. He shared phone numbers and home addresses of women, he tried to silence us when the Lebanese authorities took our side and decided to listen to our stories.

Writing this story was vital for me, not only to encourage other women to speak up, but to also share what comes along with speaking up. Everyone tells us women to be courageous and speak up, to out their harasser or abuser.

Well, it’s not that simple. It’s scary. But it can also be so rewarding. This contrast of emotions is one of the heaviest things I have ever experienced as a journalist, writer and woman.