Lebanon’s banks shut their doors indefinitely after a series of hold-ups by disenfranchised depositors demanding their money. 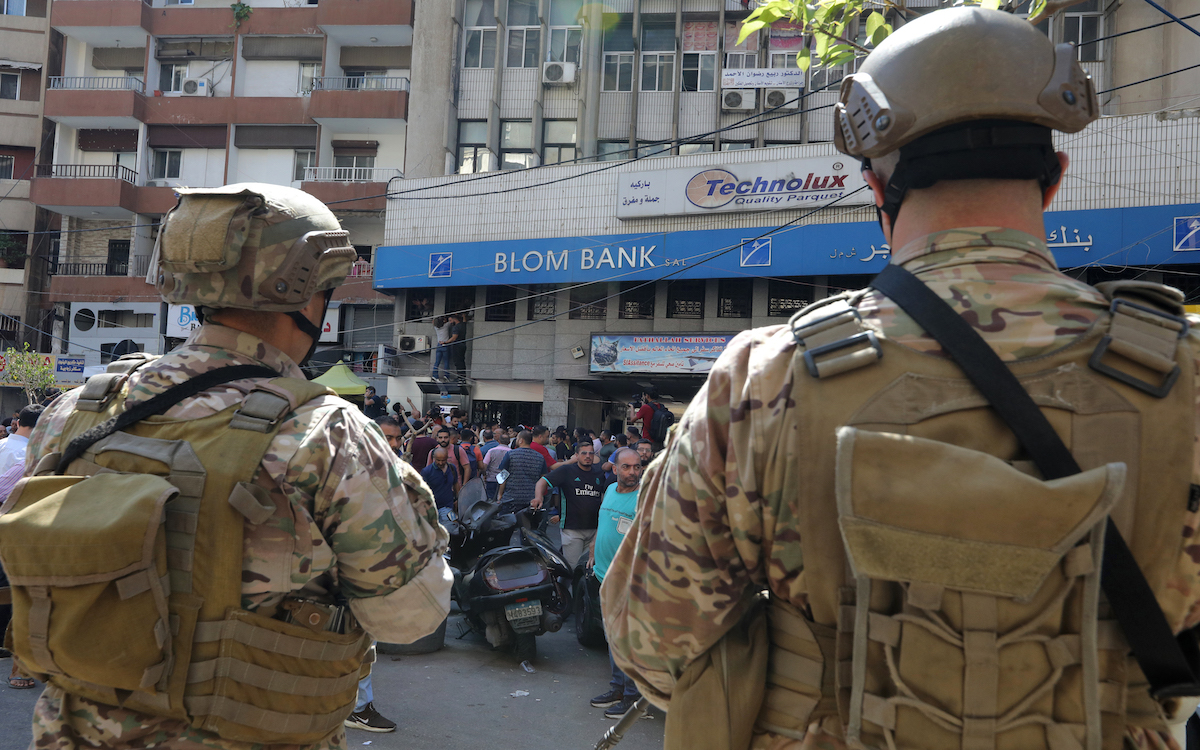 Lebanese security forces are deployed as people gather outside the Blom Bank branch in the capital Beirut's Tariq al-Jdideh neighborhood on September 16, 2022, to express their support to a depositor, who stormed the bank demanding to withdraw his frozen savings. Lebanon has been mired in an economic crisis for more than two years, since the value of its currency began plummeting and banks started imposing draconian restrictions on withdrawals. The holdup of a Beirut bank on Wednesday by an activist who filmed herself using a toy gun appears to have sparked a series of copycat raids by people fed up at being unable to withdraw their savings. There were at least another three such incidents in the country on Friday. Photo: Ibrahim Amro, AFP

Lebanon’s banking association announced Wednesday that banks will remain indefinitely shut after a series of heists made opening “too dangerous” without the precautions that banks have demanded from the authorities.

The past two weeks have witnessed several raids by depositors who held up banks, individually or in groups, to forcefully withdraw their money which has been blocked by banking restrictions since 2019.

In late August, Bassam al-Sheikh Hussein stormed Lebanon’s Federal Bank in the Hamra area of Beirut demanding access to his $209,000 savings. He was driven by desperation to save his ailing father whose medical bills had accumulated.

Two weeks later, a Lebanese woman, Sali Hafez, held up a BLOM Bank branch in Beirut brandishing what was later revealed to be a toy gun and threatening to set herself ablaze. She forced the staff to give her about $13,000 of the $20,000 savings to which she has been denied access, in order to pay for her sister’s cancer treatment.

Hafez had previously stated that she was considering selling her kidney out of desperation to save her sister.

This incident was followed by a string of copycat raiders who, for the most part, were successful at recuperating their funds. However, a number of activists who took part in the bank holdups were detained, triggering protests and attempts to storm the Justice Palace. Since banks are now closed indefinitely, experts believe changes in the banking system are imminent, as the population’s anger is rising after years of economic neglect and compounding crises.

“This is a natural development of events after everything the country has been through since 2019. I believe we could still witness more violence as the people have seen what they’re capable of,” economic expert and Executive Director of the Arab NGO Network for Development, Ziad Abdel Samad, told NOW.

Lebanon’s Central Bank announced in early September that it will no longer provide US dollars for gasoline imports, removing the remaining subsidies on fuel and taxing consumers with a fluctuating market rate that changes daily.

This has been a long-time coming, as the Central Bank has been gradually lifting subsidies on essential goods such as medicine, flour, and bread, which has impacted the country’s poor and reduced overall purchasing power.

“The government, the banks, and the Central Bank are the people to be blamed for this situation. However, Lebanese citizens are still paying the price because three years into the crisis and we have not seen any prospect of resolution,” Abdel Samad said.

Lebanon reached a staff-level agreement with the International Monetary Fund (IMF) in April to unlock a 3 billion dollar aid package to help Lebanon out of its faltering economic crisis. Yet the government has been slow to implement the reforms required by the IMF, including the annual budget, which parliament failed to adopt in its latest sessions.

Experts and lawmakers criticized the draft’s text, claiming that it lacks a rescue plan capable of alleviating financial pressures. The IMF delegation is set to return in October, however, the protracted political deadlock is paralyzing government formation and hindering the presidential elections that are set to take place in October.

Meanwhile, as the political situation continues to degenerate, depositors will continue to take matters into their own hands.

“The judiciary is on a strike and activists are being released so what other options do people have? The government left the population no choice but to use force and I fear we might be heading towards more social insecurity with rising cases of theft and public violence,” Abdel Samad said.

The expert notes that the closures could entail a radical shift towards e-banking, which, he says, benefits large depositors more than small depositors. E-banking helps large transfers for retail purchases, automatic payroll deposits and bill payments, which companies might benefit from. But for small depositors, it’ll be a new adjustment.

In any case, physical visits to banks might become scarce.

“I believe it took us this long to witness such bank raids because there were some flow of dollars during the summer season and people’s savings have probably just started to run out,” Abdel Samad said. “Current inflation rates are also not helping as people can barely afford to eat and access basic healthcare services.”

Jihad El Hokayem, an economic expert, predicts that the switch towards a cash economy, where people rely less on banks, will be met with an increased role of money transferring services such as OMT and MoneyGram.

“I believe they might take over the role of the banks when it comes to making key payments, giving loans and credit cards. They will not replace banks completely but they will be able to draw more customers with a new string of services,” El Hokayem said.

He adds that the banks might either merge, close down, or change their names. Either way, the banking system will take a new form that will transform the current phenomenon on the ground.
Lebanese depositors and activists, on the other hand, remain united in the face of oppression and brutality. Depositors Abdal Al-Rahman Zakaria and Mohammad Rustom, were released on a bail of 5 million L.L or $132, and each handed a 6-month travel ban.

“People are no longer fazed by the inept justice system, so they’re forced to take this path and reclaim their right to access their money, in whatever way possible,” El Hokayem said.

With no tangible solution in sight, Lebanon’s population continues to plunge into deeper desperation. While the international community, as well as Lebanon’s many friends across the region, have voiced their concern, the Lebanese political elite seem to be particularly unconcerned regarding Lebanon’s free fall.