Beirut is a city that holds trauma at every corner, but its suffering and tumultuous past makes some dwellers love it more than they love certainty, writes Ronnie Chatah in his weekly column. 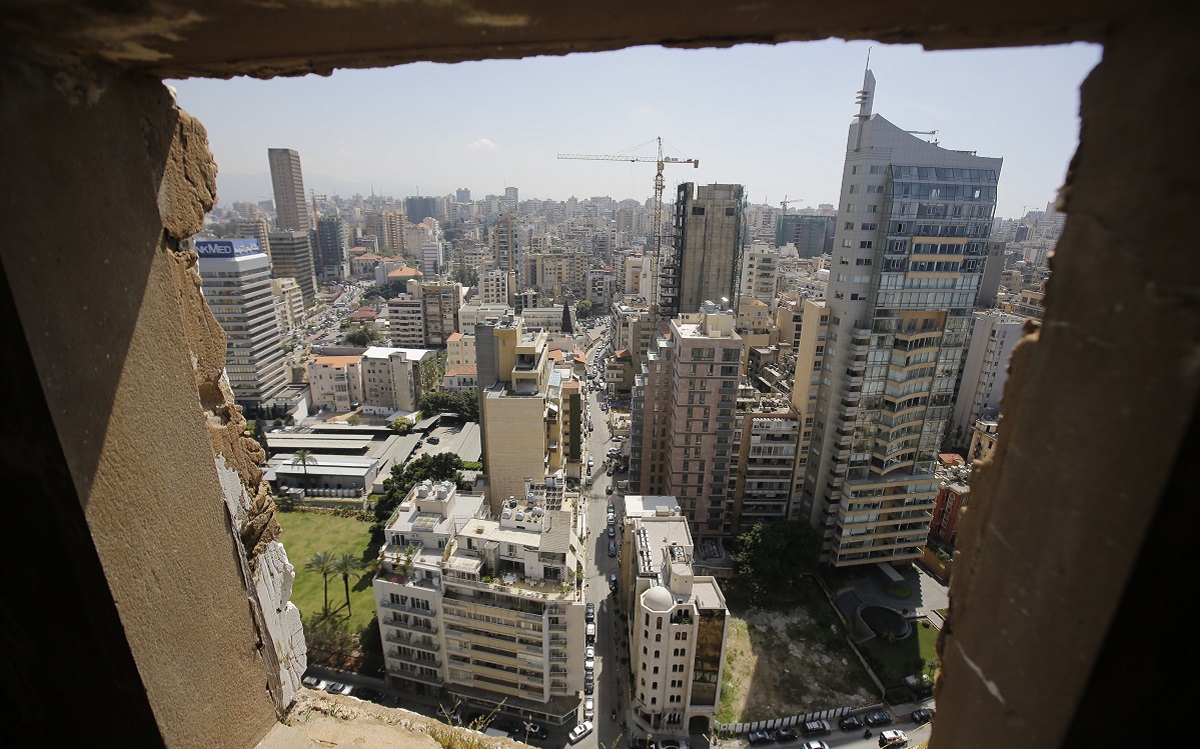 "I stole a piece of broken tile and ran down those flights, turning around to a towering shell of prosperity turned to ruin that still defines our skyline. Overlooking Beirut’s shadow today, with lights switched off and doors shut, those of us still here withering our current hell." Photo: Joseph Eid, AFP.

A balancing act between stability and violence that defined the past fifty years, at least – Samir would have taken the longer view. And a repeated demise, harming our bodies with physical wounds that sometimes fade, while marking our minds with injuries that know no healing or recovery.

With an execution list that is too long for a country this young, from journalists to intelligence officers, diplomats and politicians, economists and civil society members…the last sixteen years, alone, would destroy any sensible movement trying to move on from remnants of war. Instead of breaking the cycle that brought us to our knees, we manage to maneuver marginal reform while holding on to cherished principles in the face of drowning expectations.

When the system was redesigned in 1990 to thrive with Assad’s henchmen, it was thought to be a temporary (two year) dilemma. Fifteen years later, it transitioned to a security-military matrix reconfigured by Iran’s Revolutionary Guards. And three decades after the civil war ended, it gave way to collapse.

Which brings me to a question I am asked, daily: When are you leaving?

The most sensible question for anyone that prefers a reasonable country. Forget reasonable…semi-functional.

Those leaving in droves wish that Lebanon was that place. Their pursuits and dream palaces are no longer available here.

My own brother is heading for Dubai in days. A city that means nothing to a low-maintenance storyteller but is the preferred destination for the more financially minded. Too many of my friends have found a ‘one foot in, one foot out’ setup in Istanbul, regularly returning and working remotely with a backdrop that serves as the most convenient of long-term residency options.

Others made their way to a variety of European capitals, the U.S. and Canada (so far, none have ventured to Australia). And if you have a family, your kids’ safety comes first: you flee catastrophe, even if that means adjusting to Jordan’s kingdom of boredom or handling Cyprus’ overpriced island lifestyle.

“Scars guide my decision to stay. Their permanence drove Beirut’s sanity away. Their irreversibility draws me closer to its pain.”

The insane – and single – among us (myself included) desire our own respite, but we pursue that goal here. We endlessly reflect and narrate all that we lost while documenting a dramatically changing Lebanon. The more talented of us (myself excluded) even manage to persuade audiences why Lebanon became ungovernable, and whether we were born flawed in Mandatory error or were battered to death by regional war within our borders.

That grand debate aside, Greater Lebanon is gone. Our glory, our capital’s triumphant rise to fame in the aftermath of widespread famine and Ottoman collapse is history. The 20th century finally caught up with us in 2020, and the problems that persisted brought us to this end. The story has changed, but the first words of the first chapter of this still unpublished (and largely unwritten) book holds trauma at every turn.

Bullet holes left unrepaired from earlier militia battles with no marked dates. Mortal fire and shrapnel damage that ricocheted and added their own tragic touch to exposed walls. Remnants of the Green Line just south of the Ring, vestiges of snipers’ precision hidden behind broken slabs of concrete and makeshift dens. Abandoned homes with wartime posters of expired causes, with property owners that fled and died abroad, their descendants and relatives thankfully unable to find common financial gain by selling their property to real estate thugs, turning our urban measure to misery. And the residential jewels of Gemmayze and Mar Mikhael that made their way through civil war and plunder, only to be torn apart by the port blast.

Perhaps this new book will date Greater Lebanon’s funeral – just before its centennial – on August 4, 2020.

When floors above give way to silence, shops below speak on their behalf. Generations of inherited family trade. Owners sharing tales of a bygone Beirut. Exaggerated, indeed, but every storyteller embellishes with flavor. Restaurants that suddenly sprang up and were famous for both traditional and world-renowned cuisine adjacent to stores selling international brands throughout Hamra’s hip shopping district, using a local currency worth its value. Geography and environment that made the world envious. Ski by day, swim by night – whether that ever happened or not is another story.

Our multitude of languages, spoken at ease. Our long list of confessions leaving the mountain and other coastal towns to make Beirut home. Universities that set us apart – the American University of Beirut in particular, where Western secularism and Middle Eastern sectarianism found harmony along the Mediterranean.

The mosaic that made us who we are…or who we were. A sanctuary for minorities escaping intolerance, and a once-famed metropole pulling in the region’s brightest. A refuge for those more politically minded escaping neighboring tyranny. By day, free minds and great thinkers debating Marxism’s meaning and capitalism’s leaning from bustling cafes. And by night, a world-renowned nightlife, feeding into the former hotel district.

“The story has changed, but the first words of the first chapter of this still unpublished (and largely unwritten) book holds trauma at every turn.”

The Holiday Inn’s top floor, a rotating restaurant, rotating for just under two years on top of a Beirut that would soon find itself in hell.

Cosmopolitanism, adrift. My parents had a memorable date there.

I recklessly ran inside, just over a decade ago, right before the Lebanese army took hold. I had snuck by security guards as they slept. From collected news pieces and archives researched, I quickly found my way. A Nokia flashlight in hand, I reached the emergency stairwell on the easternmost wall. Pausing only to catch my breath, I ran from floor to floor. Breathing in darkened lungs and stale despair, militia names still visible and carved into walls. Roaming emptiness and exposed openings – one misstep could lead to deathly fall – I rotated upwards to the top. And I reached those remains, where the city once dined, and my parents danced. Brush growing on the ledge and bats living in the dusty cracked remains. Howling wind gusts and the exposed view of a city crippled below.

I stole a piece of broken tile and ran down, turning around to a towering shell of prosperity turned to ruin that still defines our skyline. Overlooking Beirut’s shadow today, with doors shut and lights switched off, withering our current hell.

Those of us born into this perpetual battlefield – many with parents like my own that fled the civil war and found ways to secure our lives abroad – have multiple options to leave today, through a second passport or a residency visa, work sponsorship or any exit strategy…yet we refuse to buy that ticket.

We lose ourselves abroad. Chaos remains more appealing than certainty. And we never understand why tranquility kills us inside.

Or maybe that is just me.

Scars guide my decision to stay. Their permanence drove Beirut’s sanity away. Their irreversibility draws me closer to its pain.