Who protects the depositors’ rights in Lebanon?

Since 2019, several groups have claimed to be protecting the depositor’s rights and have organized protests, bank holdups, and filed lawsuits on the behalf of depositors. NOW spoke with the main three groups to find out more about their background and activities. 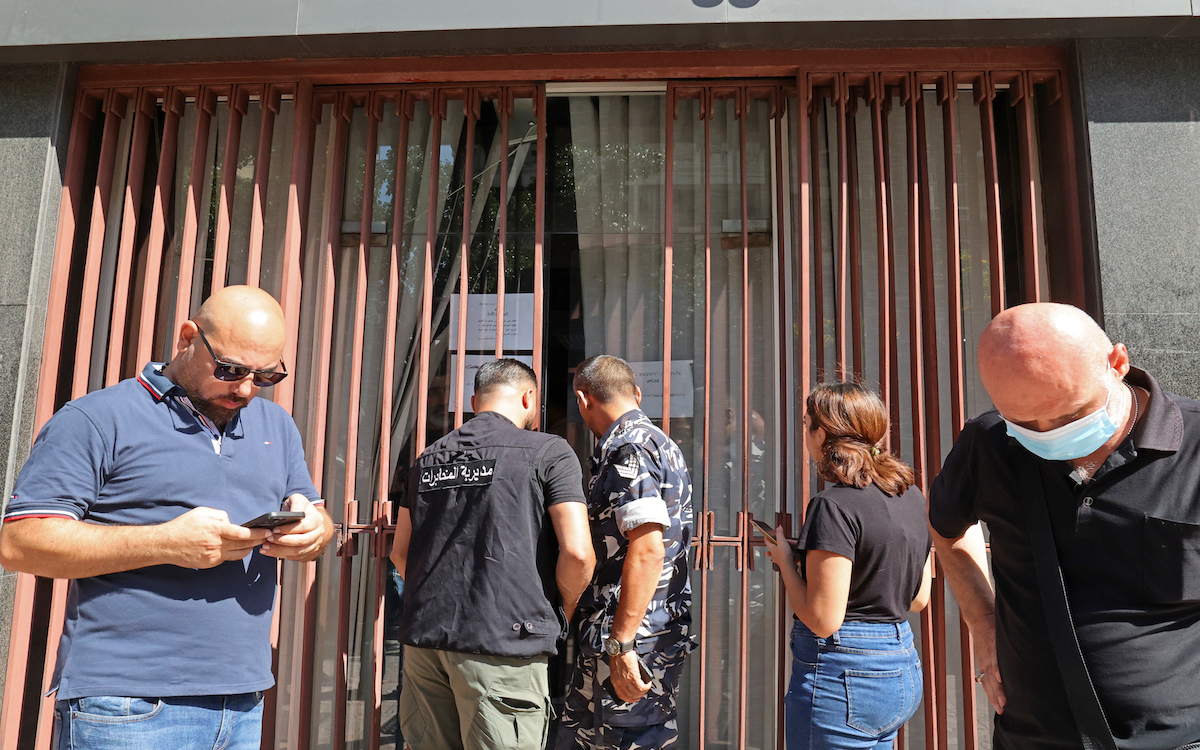 Lebanese security forces and press stand outside a branch of Credit Libanais bank held up by an angry depositor demanding access to his savings, in the capital Beirut's southern suburb of Haret Hreik on October 5, 2022. Banks in the country, mired in an economic crisis for more than two years, partially reopened last week under strict security after a week-long closure following a slew of heists by customers desperate to access their money. Photo: Anwar Amro, AFP

Lebanese banks have decided unanimously to shut down their doors following a wave of bank raids by depositors demanding access to their deposits, of which they have been denied since the start of the crisis in 2019.

The economic crisis that compounded the sorrows of the Lebanese has only gotten worse over 2022. The dollar-to-lira rate has hit an all-time high, reaching close to 40,000 LL to one dollar last week, in addition to banks tightening their restrictions on dollar deposits.

This triggered bank depositors to take matters into their own hands by orchestrating holdups and taking back what is rightfully theirs.

This phenomenon was accompanied by groups or “associations” that advocate for depositors’ rights and stood in support of the depositors throughout the crisis.

But who are these associations and what do they do?

Dina Abou Zour, attorney and member of the Depositors Union told NOW that the group began as individual activists who came together during the October 17 revolution.

Some were friends, others were complete strangers, she says.

“As the economic situation got worse, people started to have questions and we wanted to provide answers,” Abou Zour said. “We were a team of lawyers, economists, and journalists, so each one used their expertise to help navigate the people through the economic collapse.”

She adds that the union is compromised of legal, economic, and media committees that operate on the website, social media platforms and examine governmental policies and decisions.

“We also sit down with the opposition MPs to agree on how to tackle these policies and draft laws inside parliament. One of our biggest achievements in my opinion was quashing the capital control bill.”

Parliament has postponed discussions over this controversial law due to a series of protests in front of parliament rejecting the proposed law, which prioritizes commercial banks and neglects the depositors.

In seeking solutions to the problem it was natural to meet up with politicians and judicial figures. But it was all in vain and resulted in a series of repetitive lies.

Abou Zour says their group has also met with the International Monetary Fund and the World Bank and is currently studying the economic recovery plan necessary for the IMF loan Lebanon hopes to procure.

Meanwhile, the lawyer says, the Depositors Union has an outreach team and a hotline for people to receive answers to their financial and economic concerns – as well as demand support in case of bank holdups.

They also continue to file lawsuits against banks for local and foreign depositors.

Another group, the Depositors’ Outcry Association recently gained notoriety for claiming to have arranged Sali Hafez’s bank raid on September 14, with the help of another association by the name of Mouttahidoun.

Despositors’ Outcry founder, Alaa Khorchid told NOW that he had initially returned to Lebanon in 2019 to do business after working in Africa for years. Having decided to stay in the country, Khorchid communicated with people online who shared the same concerns and sought advice from experts.

Mouttahidoun, on the other hand, is founded by Rami Ollaik, a controversial lawyer who has been arrested for defamation after filming a video attacking the judiciary and a public prosecutor. In November 2021, the Beirut Bar Association suspended his membership.

We try to help wherever we can. It’s true that we’d rather see more people join our street movements, yet we are here to provide support if people need us.

Ollaik, according to Khorchid, leads his group’s legal team and participates in demonstrations. On the controversies surrounding the lawyer, Khorchid says that he”has known Ollaik for over a year now and has not seen anything negative from him yet.”

The founder says that the association operates several Whatsapp groups that serve as “support groups” for people to vent and seek advice on banking matters.

Khorchid says that the group is apolitical and does not correlate to the October 17 revolution. Yet he claims to have met with prominent political figures such as Parliament Speaker Nabih Berri and President Michel Aoun.

“In seeking solutions to the problem it was natural to meet up with politicians and judicial figures. But it was all in vain and resulted in a series of repetitive lies,” Khorchid said.

The founder favors protests over social media posts and does not believe in the latter’s ability to exercise pressure.

“We try to help wherever we can. It’s true that we’d rather see more people join our street movements, yet we are here to provide support if people need us,” he said. “We also have some connections inside banks so we can help sort out small issues.”

The Association of Depositors

The founder of yet another group, the Association of Depositors, Hassan Moughnieh, garnered popularity when he organized a bank hold-up in March 2020 to secure funds for his sick mother, who has since passed away.

Social media helps connect experts with people who may not have the necessary knowledge and explanations about recent economic developments and how to approach them. This was a positive outcome following the October 17 revolution where people lost trust in the system and started to ask questions.

Moughnieh told NOW that he had initially started a group with Khorchid but the two “disagreed on the approach to direct the association” and each went in a separate direction.

Moughnieh says that his association has spent the last couple of years using its online platform to provide and disseminate information on finances and the economy, while also organizing protests.

“Social media helps connect experts with people who may not have the necessary knowledge and explanations about recent economic developments and how to approach them. This was a positive outcome following the October 17 revolution where people lost trust in the system and started to ask questions,” he said.

“However,” he added, “out of the thousands of followers we have on social media, only a slight portion shows up in our demonstrations.”

For Moughnieh, the need to protest against the banks and decisions that favor their interests over the people’s is vital for palpable results. Similarly to Abou Zour, he cites the example of the capital control law that protests helped shelve.

As for the reason behind the division among the groups representing depositors and the lack of unity, Moughnieh says that his group and the Depositors Union share common beliefs but have decided to stay separate as “multiple associations amass more attention which will keep the conversation going.”

The Association of Depositors and the Depositors’ Outcry Association stand against the International Monetary Fund’s (IMF) $3 billion loan deal for reasons they believe that the deal will not prioritize all depositors while the Depositors’ Union supports the ongoing talks with the US-based loaner.

As a consequence of the October 17 revolution, these groups play a role that was previously left blank in Lebanese society. As all three have put it, “there was previously a blind trust in the bank, now people are aware and cautious.” All three groups call for demonstrations and use their platforms to promote financial and legal awareness regarding banks. Their lack of unity may be seen as a microcosm of the same old problems in Lebanese politics and society, or perhaps, this instance of diversification is not such a bad thing – with the same goal in mind, each group offers a slightly different approach for the country’s diverse pool of depositors.