HomePoliticsInterview#2022: From the Ring bridge to the polls
Interview, Profile
Dana Hourany

For a first of a series of profiles of emerging Lebanese politicians, Dana Hourany sat with Minteshreen’s recording secretary Samer Makarem to talk about his political path and plans for the future. 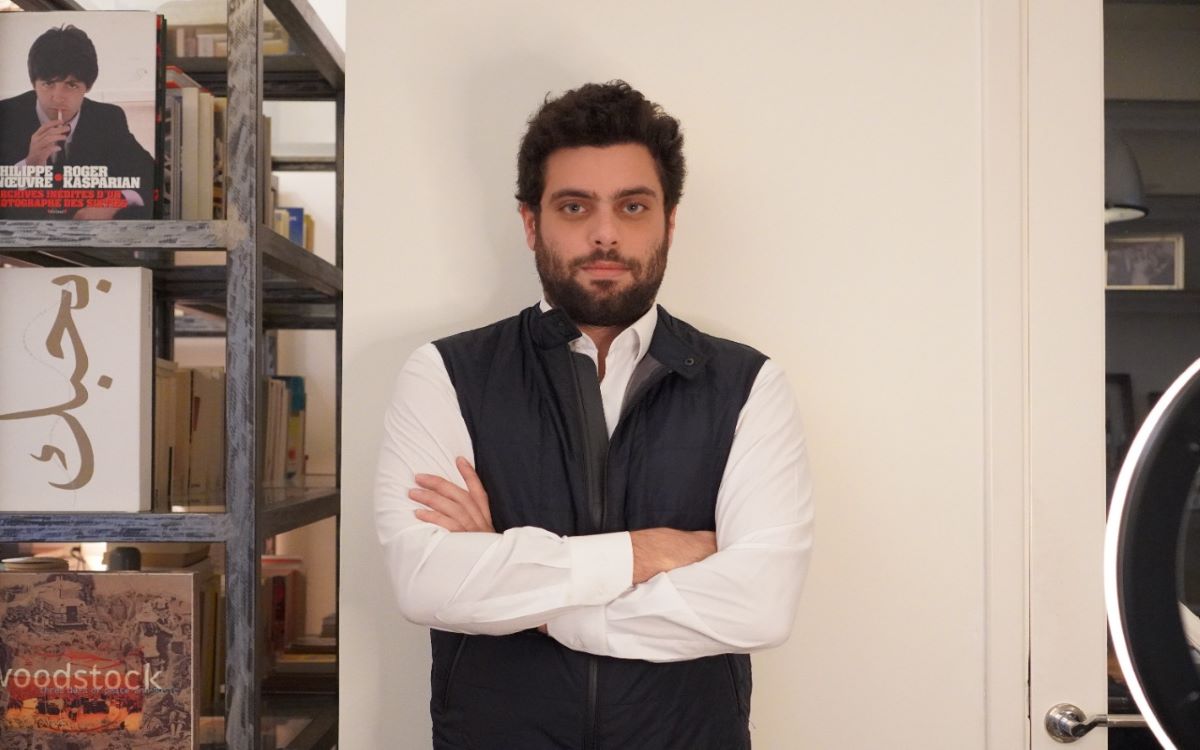 Samer Makarem, Minteshreen recording secretary, has taken parts in all protests movements in Lebanon, starting with the Cedar Revolution in 2005. Photo: Courtesy of Samer Makarem.

One of Samer Makarem’s earliest political memories of Lebanon was the attempted assassination of MP and former journalist Marwan Hamadeh in 2004. It happened right next to his school, in Ras Beirut. He was then 14 and had just moved back from Saudi Arabia, where he grew up.

Makarem was only a teen when the Cedar Revolution began and hundreds of thousands of people took to the streets of Beirut to protest against the Syrian occupation. But he says it helped crystallize who he wanted to be and what he wanted to fight for.

“The demands [we had] then are still valid. As a 15-year-old going down to the streets, waving the Lebanese flag, a sense of pride was instilled in me. I saw a vision of a country we strived to build,” Makarem said.

Samer Makarem, now 31, says he leads a double life. Half of the time he’s managing director of ClapClap, a creative studio in Beirut.

The other half is spent on one of Lebanon’s newest youth-led political movements, Minteshreen, getting ready for the 2022 elections.

The street that brought them together

At first, he says, they were just protesters. In October 2019, when thousands of Lebanese took to the streets to protest against the political system that they saw responsible for the country’s financial crash, Makarem and his friends were among them. They used to meet on the Ring bridge in downtown Beirut.

“They used to call us the “Ring group”,” Makarem told NOW. “Day after day we started seeing the same faces and we saw that we shared the same ideas and same future prospects. We started going to our friend’s house to grab a beer and talk about politics.”

Several talks and beers later, protesters who had met on the street became friends and they founded “Minteshreen” – Arabic for “From October” and “spread out” from Lebanon and the diaspora. It was not a political party at first, but a street movement that strived for change, like most other groups formed during the October 17 uprising.  They would organize talks, sit-ins, and protests.

Makarem says they did not like the idea of becoming a political party. “Party” had been used in Lebanon for decades in correlation with the old civil-war era sectarian factions. They didn’t want to be part of that.

Then the COVID pandemic broke out and Lebanon went into a series of lockdowns. Lockdowns meant no more street movements. But that gave them time to think more about what they wanted to do in the future, and what they could do to help during the COVID crisis.

“We started to discuss how we wanted to define ourselves and what we could offer at the time. So we set up Baytna Baytak, a civil initiative that helped nurses and doctors find places to stay when the pandemic broke,” Makarem explained.

By then, Makarem had already garnered some experience in civil society movements.

He had officially joined the youth section of the Democratic Left Movement in 2008. In 2008, he participated in student elections in the American University of Beirut, where he studied marketing and business management.

Makarem graduated college in 2011. In 2013, he participated in the Take Back Parliament movement when activists crowd-sourced to build an electoral platform that was the ideal political agenda they would like to see candidates run with.

In 2015, he took to the streets again during the “YouStink” movement. Thousands of Lebanese protested against corruption during a trash crisis in the Lebanese capital when deadlocks and strikes in the waste collection industry lead to garbage piling in streets across the country for months. Protesters called for transparency and the demise of the patron-client system that was dominating Lebanese politics and infrastructure.

A year later, at 26, Makrem volunteered with Beirut Madinati, an independent political movement that participated in the municipal elections and won seats in the municipality council. The 2018 elections, when independents lost dramatically in favor of the established sectarian parties, were a huge blow for his hopes, Makarem explains.

He says he planned to avoid politics. But he could not stay away in October 2019, as the streets were filled with people demanding accountability and a change of what they called “regime” – the sectarian patronage system that had depleted the state of all resources.

Makarem says he put his 2018 disappointment behind him and joined the protests. He became a “happy hour politician”, as the Minteshreen group members called themselves as a joke. They would meet in the afternoon and sit and discuss political plans, how to develop the movement.

Makarem became the recording secretary of the movement – he was responsible for all operations, things moving on time, budgeting and managing the scope of the team and future projects.

In June 2020, the group decided to move into an organized political movement.

“It wasn’t a top priority of ours, but then August 4 [Beirut blast] happened,” he said. “We lost our friends and our places of work and hangout. Then August 8 happened, where we were almost massacred for protesting [against the government]. We realized that there was no room for a mere street movement,” Makarem explained.

In response to the August 4 explosion, Minteshreen set up Basecamp, a grass-roots initiative to help support the Beirut residents affected by the blast that killed over 200, wounded 7,000 and left an estimated 300,000 people with damaged homes, many even homeless.

“We would spend half the day working with Basecamp and the other half would be spent at our friend’s house writing our political program, mapping out what every party said in the past and what they failed to achieve, what ideas we wanted to suggest….”

The group also elected an executive committee of seven people. The Executive Committee splits its tasks between political positions development, outreach to other groups, fundraising and resources, with the hope of being able to have members commit to Minteshreen full time.

They also elected technical committees that were a blend of experts and passionate members in various fields such as environment, youth & universities, civil rights, social and more.

According to Makarem, their program was crafted by researching and collecting data from people on the ground and developing new angles to solving policy problems. The work was finalized by consulting many experts.

They aim to help save the country’s collapsing economy by mapping out the unemployment rate, fixing the budget deficit, creating emergency helping plans for the worst affected etc…

But in order for any reforms to be implemented, sovereignty is needed, he said.

“It’s hard to start working when you can’t control the borders for example and all the smuggling that is going on,” Makarem pointed out.

In his view, Lebanon was never an example of an independent strong state as it was always ruled by a foreign power, from the Syrians, Palestinians, French and Ottomans. For the 31-year-old politician, the current crisis offered an opportunity for a big impact that might yield results in the future.

He says Minteshreen wanted to remove the image of Lebanon as a space for international conflicts. They neither wanted to be a space for Iran nor for the US, he pointed out.

Lebanon needs a strong defense and security system that centers the weapons of defense within one institution, the national army, he added.

This means disarming the Shiite Iran-backed party Hezbollah, the biggest and strongest political player in the country, without alienating the Shiite electorate the party caters to.

“We need to watch how we address the Shiite Hezbollah supporters so that they don’t feel threatened. We need to show them the example of a state they can believe in. A strong one they can rely on,” Makarem explained.

Makarem asserted that the group will definitely take part in the next parliamentary elections and will field candidates. However, on a personal level, the young politician was unsure about his own participation in the March 2022 elections.

“If duty calls and the party or opposition forces see my candidacy fit, I will answer the responsibility.”

But he said he aspires to join the municipal elections.

“Municipalities have financial independence, you work directly with the people and you have this sense of closeness. You can also do a lot of projects on a smaller level and hear the feedback directly from the people,” Makarem explained.

This would gain him experience for future parliamentary elections.

Minteshreen is not yet a registered political party either. The movement applied for registration at the Ministry of Interior, but it has not yet been approved. Without being registered as a political organization, it cannot have a bank account and cannot receive funds.

But Makarem says that whether they participate or not in the 2022 elections, Minteshreen will not stop there.

“You feel like you’re working for something bigger than yourself, and it’s not just career aspirations. I have a chance to fight for four million people, something that I might not be alive to see but might pave the way for future generations to finish the job.”

Minteshreen, he says, lost some members over the past months, as many sought job opportunities abroad. Many took their fight with them and formed active diaspora committees.

But Makarem said that he is not willing to give up and move to a different country.

“There’s something I can’t explain that pulls me to Lebanon. It’s not over yet for me here, I want to see it to the very end,” he said.