As the registration window for Lebanese expats ended on November 20 with a record number, Lebanese living abroad say the communities remain politically divided and many feel still unsure about how organized the opposition is. 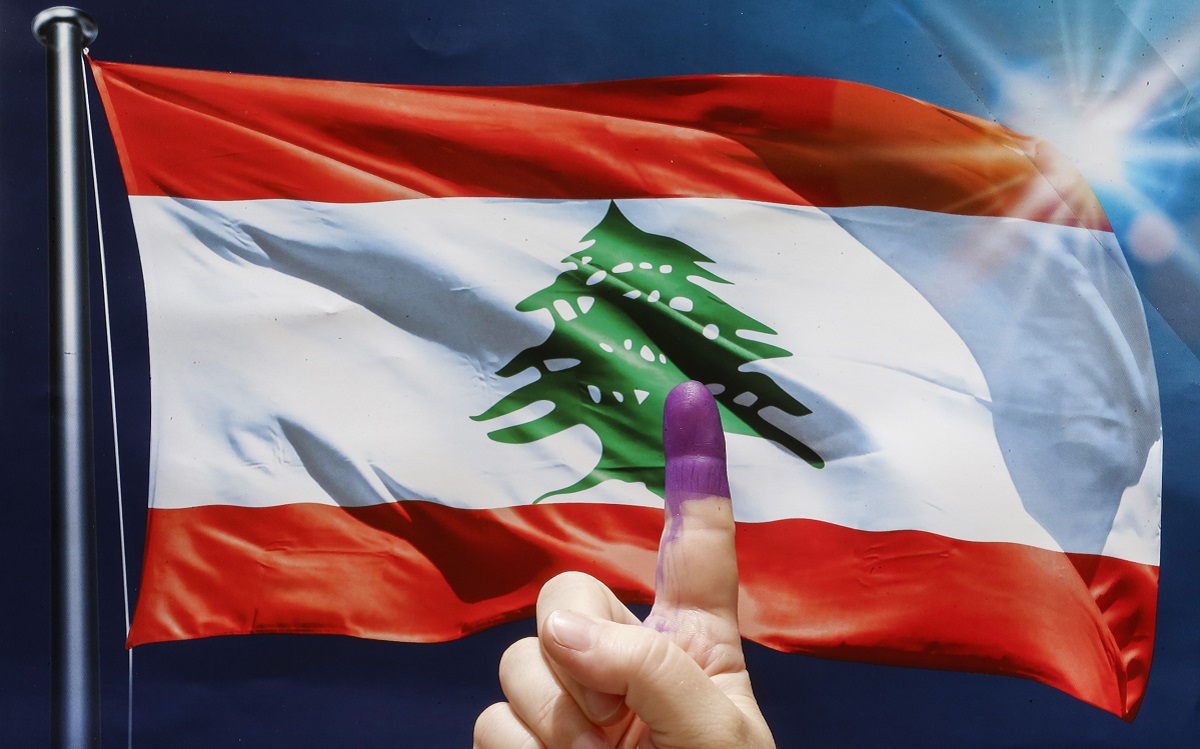 A woman flashes her ink-stained index finger before a poster depicting a waving Lebanese flag, after voting at a polling station in the capital Beirut on May 6, 2018, as the country votes in the first parliamentary election in nine years. Photo: Anwar Amro, AFP

Ralph Hraoui, 26, splits his time between his postgraduate studies in Paris and volunteering with uniteddiasporalb, a social media-based global Lebanese expat network that aims at raising awareness about the electoral process in Lebanon.

He left the country in 2020 to pursue his master’s degree in Business Strategy and International Development. His ultimate goal was to find a job and settle in France.

But on Saturday, November 20, he spent his day online helping Lebanese based in Latin America register to vote online for the parliamentary elections before the midnight deadline.

“The [Lebanese] ambassadors of these countries didn’t do their jobs right and did not inform people about the elections. So all of them rushed to register today, before it’s too late and I’ve been busy all day trying to help them by first convincing them to register and then instructing them on how to do so,” he told NOW.

The Lebanese Foreign Ministry said on Sunday that the final expat voter count reached 244,442,  more than double the number of expats who registered in 2018, 93,000.

Half of the expats registered the last week of the registration window, following widespread social media campaigns by various organizations and new political parties that are counting on votes of the Lebanese living abroad to garner enough support and enter the parliament.

However, analysts and Lebanese expats say that although the number of registered expat voters is largely seen as a step forward, the non-sectarian portion remains unknown.

Moreover, though many expats welcomed the help and the reminders received online, others felt chased and also thought the political messages put too much pressure on a diaspora that is as politically fragmented as the society at home.

“I feel like this campaign has put the Lebanese under two umbrellas, the good Lebanese – the ones living abroad who will initiate the change during the elections and the bad Lebanese – the hopeless residents that are a lost cause. This is the sentiment that’s coming across and it’s simply not true,” Joseph El Khoury, psychiatrist based between Lebanon and Dubai and social media influencer, told NOW.

He said that the image of the relaxed, happy, worry-free diaspora that was detached from its homeland and did not really want to get involved politically that circulated in various media outlets was an illusion.

For El Khoury the campaigns worked through the employment of guilt tactics to push people to register before the deadline. But this deepened the divide between the two groups – the diaspora and the Lebanese still residing in the country. The former constantly felt responsible for the latter which, in turn, felt passive and constantly dependent.

Psychologically speaking it would have been more productive to address the diaspora under the slogan of joining forces with the residents so that we could undergo the battle together, not separately.

“Psychologically speaking it would have been more productive to address the diaspora under the slogan of joining forces with the residents so that we could undergo the battle together, not separately,”  he pointed out.

Most Lebanese expats did not become worry-free as soon as they left the country, and have never been disconnected and uninterested either, El Khoury said. They think of taxes, financial decisions related to their families back home, and deal with the emotional distress that follows emigration.

“[Some Lebanese back home] think that expats are not concerned with their country’s problems, but they are. They share the same mindset as the ones still in Lebanon, they have families to take care of and money to worry about so they could easily vote for the same people their resident counterparts would vote for,” he said.

The psychiatrist also explained that the act of changing countries does not guarantee that one is no longer a supporter of a sectarian party.

El Khoury explained that many expats who emigrated during the Lebanese civil war still support the establishment parties, and their children, who did not grow up in Lebanon, may also carry inherited sectarian ideologies. Many of them still live in isolated sectarian communities in the countries they emigrated to, he added.

Yara Lakkis, 25, a Lebanese political science bachelor’s student in Germany agreed that the Lebanese in the diaspora reflect the Lebanese society as a whole: they are as fragmented in terms of political affiliation and support abroad as they are at home.

“My friends and I would have conversations with people who claim to be pro-change, but they can easily switch to defending their [sectarian] parties and start making excuses for them as if they still saw hope in them,” Lakkis stated.

For this reason, Lakkis said she felt demotivated to vote. But she said she will for the sake of the experience. She considered the media campaigns to mobilize the diaspora “poetic” and didn’t believe the political class would allow for any change to take place.

It’s funny how most of the responsibility falls on our backs when a large number of us have left to find work and get some fresh dollars. We didn’t leave to fight for change. If change was to happen, it would have happened from inside the country.

“It’s funny how most of the responsibility falls on our backs when a large number of us have left to find work and get some fresh dollars. We didn’t leave to fight for change. If change was to happen, it would have happened from inside the country,” Lakkis explained.

Joseph, 40, who wanted his last name and location to remain anonymous, told NOW that he did not register to vote abroad in 2022, although he’s been working and residing in a European country for 7 years. The reason, he explained, was that he registered in 2018 and he voted in the embassy in his country of residence only to find out that his vote was cancelled.

“I voted for the independent list,” he said. “The sectarian parties were present with observers and electoral materials at the poll station. I found out later from a fellow expat that my vote had been cancelled. He knew it was mine because I was the only one from my home region who had voted. And I know for sure there was no reason to cancel it,” he explained.

He also says that it felt pointless to complain and that in 2022 he would be voting in his hometown in Lebanon where he feels the opposition can have more control and better means to observe the voting process.

Unity, campaigns, profiles of candidates, and political programs are seen as vital elements that the diaspora needed in order to make up its mind concerning the elections. However, with new political parties still waiting for legal registration from a reluctant government controlled by establishment parties, and with an ongoing quarrel between the Presidency and the parliament over the actual date of the legislative poll, none of these are yet known and a large number of voters, including expats, still feel confused, Lakkis explained.

That, she said, sows the seeds of doubt over the capabilities of the opposition parties that mobilized after October 17.

“I don’t see any campaigns or candidates. Are they just going to appear one month before the elections? There are also rumours about the elections not taking place so it’s all very vague,” she explained.

El Khoury agreed over the lack of proper campaigning.

“They can’t just introduce themselves three months before the elections and start talking to people,” he said. “This groundwork should have been done before, where they made sure to spread their ideas. A lot of groups also emerged out of the 2019 revolution that lack seriousness. At least half of them should merge,” he explained.

Slogans that incited anger and appealed to emotions could not be translated into governance.

Hraoui, the Paris-based volunteer, says his contribution was passion-driven and that, despite all the unknowns, he still believes the opposition can score some wins in 2022.

“I’ve been active since the [October 17] revolution and I see what’s going on inside this opposition from groups from discussions and political visions so I believe in change,” he explained.

He did, however, point out that the opposition’s pace in establishing itself was still slow. They should have been more widely known by now and have introduced themselves in more areas across the country, he pointed out.

The plan was to convince people to at least register so that they could have the option to decide later on whether to vote or not, once the candidates were announced.

There should be a degree of transparency about what can be realistically achieved so that if the results were disappointing, the ones who were very hopeful will feel as if they’ve lost everything.

As far as Lakkis is concerned, Lebanese voters need to establish a new relationship with their state so that they could all become citizens and not eighteen sects.

“Usually the citizen would be a partner in the country’s decision making but in Lebanon, we were never taught how to do so. This was due to the sectarian state that manipulates the people and strengthens the traditional parties,”  she explained.

She also feels that many of the lebanese eligible to vote among her expat friends are still set to support old sectarian political parties.

“I know people who will vote for Lebanese Forces just because they’re anti-Hezbollah,” Lakkis stated.

El Khoury said that the main force of change would be the recent diaspora, the Lebanese who left after the 2019 economic collapse. The reason, he said, was that they were more connected to the country’s reality and also wanted to come back once circumstances improved, which made them more involved politically.

“These people want to see a concrete plan that will put Lebanon back on track in 2-3 years so we need trustworthy leadership that will start implementing the seeds of change and not just push us to vote for the sake of voting,” he said.

El Khoury warned against the opposition overusing emotional messages to rally voters. Disappointment in the eventuality of not delivering may be more damaging than anything else, he stressed.

“There should be a degree of transparency about what can be realistically achieved so that if the results were disappointing, the ones who were very hopeful will feel as if they’ve lost everything,” he said.

But for Hraoui and many of the recent youth diaspora, hope was everything. He called his decision to move to France “forced exile” and he explained that political activism was his way to still be connected to his homeland.

“The ones who dislike Lebanon and are happy they left are a minority, we [the involved ones] are the majority. We are 80 percent versus 20 percent. So don’t underestimate us, we are capable of change,” Hraoui said.