Former Israeli Justice Minister Yossi Beilin and former legal adviser to the Palestinian negotiation team Hiba Husseini submitted a short-book proposal for a confederation as an interim solution to the two-state solution. What angle does this new proposal take and what are its prospects? 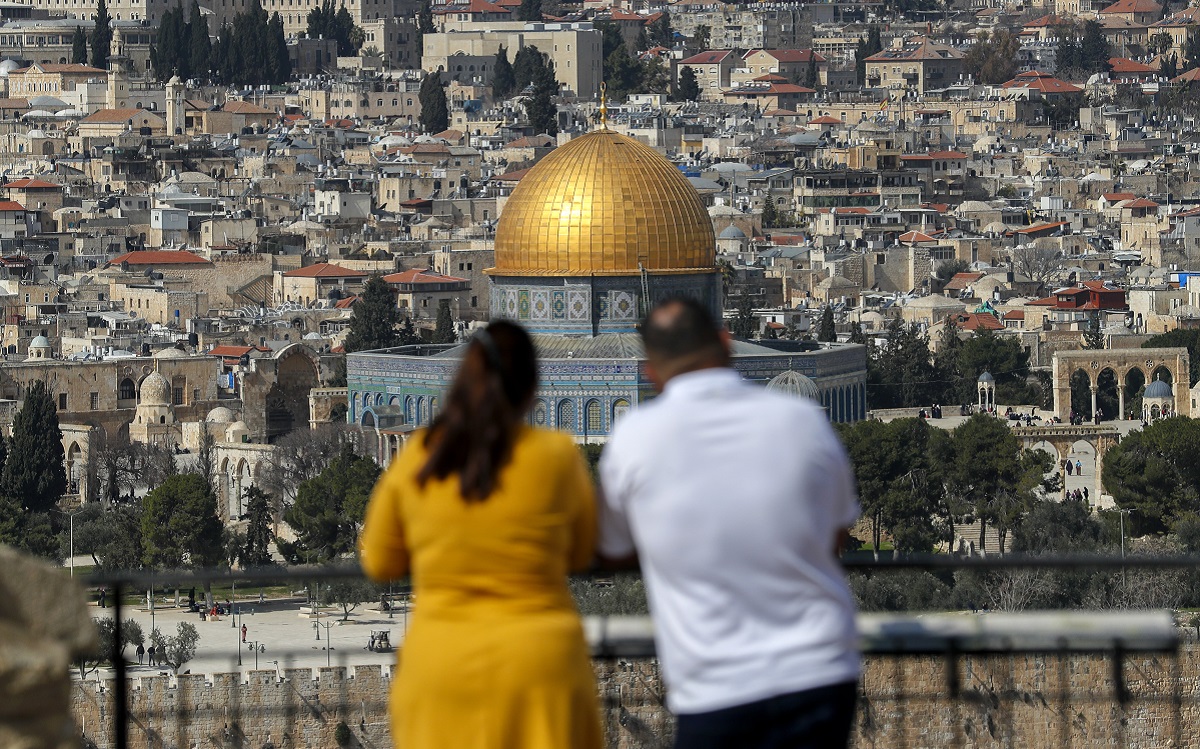 A picture taken from the Mount of Olives on February 18, 2022 shows tourists taking pictures of Jerusalem's Old City and the Dome of the Rock in al-Aqsa mosque compound. Photo: Ahmad Gharabli, AFP.

The picture of the Israeli prime minister Yitzhak Rabin shaking hands with Palestinian president Yaser Arafat does not escape the memory of most who witnessed the event. I know my family was glued to their huge box-shaped TV set in disbelief.  Most in Lebanon remember Arafat as a ruthless guerilla leader or as a belligerent freedom fighter, so it comes to no surprise that many were perplexed witnessing this momentous occasion.

There are many Jews who despised Rabin for it and, indeed, many Palestinians and Arabs saw in Arafat a traitor for forsaking the Palestinian cause. However, for those who believe in the inevitability of a peace treaty and that, between the river Jordan and the Mediterranean sea, there are two peoples who have no other place to go, the Oslo process was a great leap in the right direction. President Afarat and Prime Minister Rabin were brave enough to rise up and realize this.

The signing of the Declaration of Principles on September 13, 1993, opened a new chapter in Israeli-Palestinian politics. Since then, the peace process has seen some victories, but also many setbacks – desperate measures, assassinations, settler violence, bulldozers, attacks on tourist areas, more settlements, bombings and bombardments, several intifadas, and the rise of media culture too.

After a series of historic events, the Arab Palestinians, alongside the Jews, claimed the right to self-determination in historical Palestine. The initial partition plan in 1948 failed, the Jewish triumph in the war resulted in an Israeli state, while the West Bank and Gaza Strip fell under Jordanian and Egyptian rule, respectively. Fast-forward 19 years, Israel captured, after the events of the 1967 war, the West Bank, the Gaza Strip, as well as other Arab territories.

The two-state solution is a globally supported suggested framework for resolving the almost century-old Israeli-Palestinian conflict. The proposed solution, through the Oslo accords, was aimed at establishing a Palestinian state for the Palestinians alongside the nation state of the Jews, Israel. After months of indirect and direct negotiations, the Israeli government and the Palestine Liberation Organization (PLO) agreed upon a Declaration of Principles which entailed the implementation of this solution as part of the Oslo Accords; this lead to the establishment of the Palestinian Authority (PA) as the sole representative of the Palestinian people.

The HLC offers an approach that apprehends the religious preoccupations and nationalistic considerations of both peoples.

The two-state solution conceived in Oslo was carried on, from the Israeli side, by the Israeli Labor Party. It had garnered early support from foreign minister Shimon Peres and, in turn, Prime Minister Rabin. But Rabin was assassinated on November 4, 1995, a tragic day in the history of the state and the peace efforts.

Following the turmoil, through rough politics and terrorist activities, Israeli politics witnessed a resurgence of the right-wing through Benjamin Netanyahu.

Washington-based professor David Makovsky writes in his book Making Peace with the PLO that on the day of signing the Declaration of Principles, the Israeli popular support for the deal was polled at 62 percent.

Regrettably, that figure has declined as more Israelis grew disillusioned, indifferent or hostile towards the peace process. What was aspired to in the days of Oslo, considering the decline of the Israeli left, seems fairly distant today.

From the Arab perspective, the disenchantment and distrust are almost palpable. Many, today, would suggest that the Oslo Accords were a senseless project void of any earnest support to ever pose a realistic end to the Palestinian tragedy. As more settlements are built in the occupied West Bank, a sense of political despair rules in Palestine.

Much of the critique towards the Oslo process, on both sides, is regularly riddled with meaningless rhetoric void of any resolute initiative towards a substitution. This is evident amongst the Palestinians, and the Arabs in general, as minuscule acceptance of a general ideal of peace has been dominating the narrative. In addition to that, it is no secret that much of Israeli right outwardly rejects any establishment of a Palestinian state in the West Bank.

Nevertheless, there are credible concerns, which many on the left raise, that constitute warranted reservations about the Oslo Accords. The huge increase in the number of  Jewish settlements and settlers in the West Bank form a serious roadblock in establishing a Palestinian state. The settlements would force a disintegrated Palestine with disconnected Palestinian cities and towns.

How would the Palestinian state look like with all these settlements?

Former peace negotiators, former Israeli Justice Minister Yossi Beilin and former legal adviser to the Palestinian negotiation team Hiba Husseini, presented a new proposal at the beginning of February: the Holy Land Confederation. The confederal proposal in the short book was written in the sanguine belief that the Israeli/Palestinian conflict is not of a Greek tragedy’s Moira fate, but a soluble one.

The Holy Land Confederation idea promotes the ideal of “cohabitation” as opposed to the “divorce” framing, as many two-state solution proponents emphasize the need to separate the two peoples living in the Holy Land.

The proposed HLC would aspire to eliminate noted obstacles to reaching a peace agreement; namely, the need to forcibly evacuate tens of thousands of Israelis. The HLC would also seek to allow for augmented cooperation between the two states in the more intricate matters concerning Jerusalem and facilitating movement. Moreover, a cardinal feature of the proposal is the reciprocal scheme in which an agreed-upon number of citizens from both states would be granted residency in the other state, adhering to the laws of that host state.

Accordingly, the Palestinian State would be immediately established on the land including Areas A (where the PA has full control) and B (where is shares control with the Israeli authorities). The HLC would then be realized at the end of a 30-month implementation period. The Palestinian State would thus encompass an area of 6,205 km2 (22.5 percent of historic Palestine, see Ch3 of Geneva Accords). Ultimately, both states would agree that potential future disputes would be solved through bilateral negotiations, third-party mediation and arbitration.

The HLC would depend on certain working assumptions. Namely, the 1967 lines would serve as a reference for the borders between the states as land swaps would be settled on a 1:1 basis for first-line settlements with no Palestinian communities. Appropriately, 29 Jewish settlements in the West Bank and East Jerusalem would be annexed into Israel whereas 105 West Bank settlements populating 193,565 Jews would live, if they choose to stay, under Palestinian sovereignty.

Territorial aspects of the deal are elaborated in the short book. It also expands and exposits on the other mundane intricacies of the proposal concerning the different matters up for contestation; these include security considerations, the Palestinian refugee issue, cooperation, economy and the legal system.

The HLC offers an approach that apprehends the religious preoccupations and nationalistic considerations of both peoples.

The Palestinian state, according to HLC, would not satisfy many Palestinians who dream of a larger-scale practice of sovereignty. The new state would have military and consular restrictions which would be a warranted concern for any citizen; another credible concern is a distrust in the political process and the commitment to the process.

The political stalemate which has engendered a further perpetuation of the conflict, alongside a volatile Palestinian community facing difficult tribulations, needs deliberation to end the travesty that is the occupation; through creative and innovative solutions.

Hiba Husseini and Yossi Beilin are not fringe political activists. With Beilin’s unabated belief in a Jewish state and Husseini’s conviction for Palestinian statehood and sovereignty, they both thus appeal to the respective concerns of their people.

It is yet not clear whether the proposal has enough support from politicians and people on both sides.

Considering that the populations’ two ideals complement each other through this Holy Land Confederation, Beilin and Husseini may be hitting a nerve. Both figures offer a pathway towards reconciliation; nevertheless, how they propagate this proposal and promote their “cohabitation” ideal would be a decisive test for the HLC.