Though the now postponed dinner hosted by the Swiss embassy may have generated controversy regarding the presence of Hezbollah and the Taif agreement, MPs for the Lebanese Forces and Free Patriotic Movement contend that the media blew the event out of proportion. 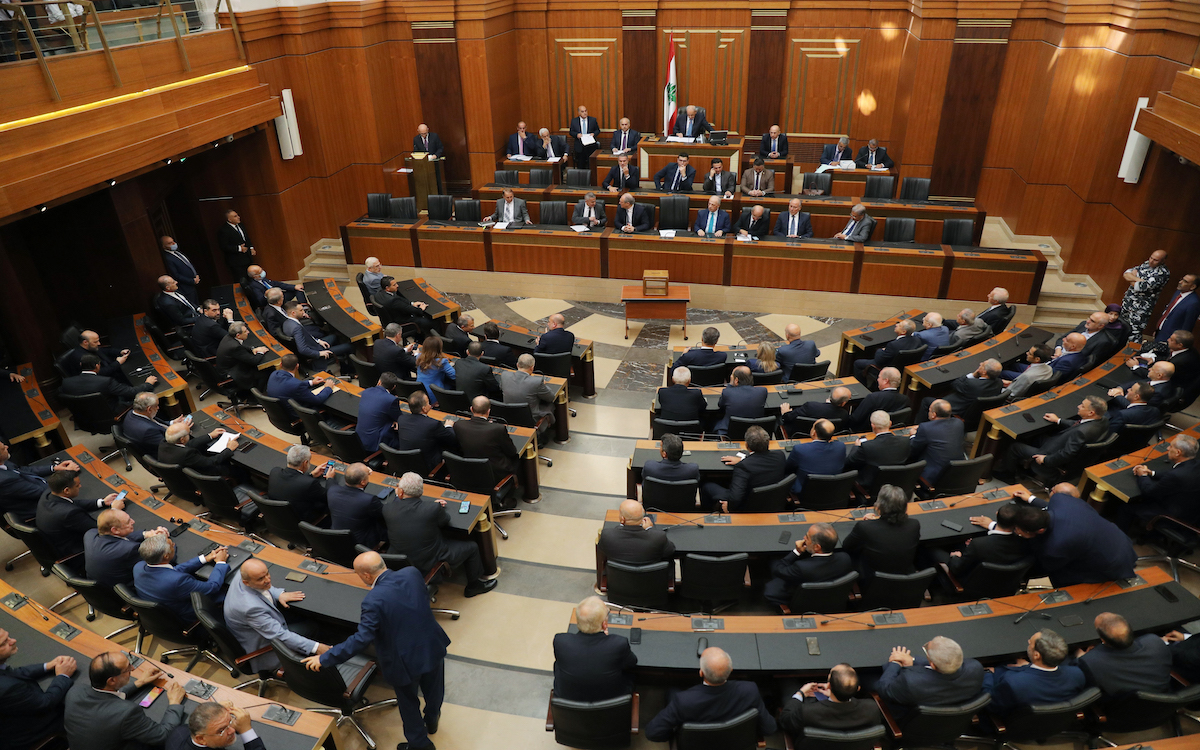 Lebanese Parliament Speaker Nabih Berri (top-C) opens the first session to elect a new President in Beirut on September 29, 2022. Lebanon's parliament met to elect a new president, with no consensus on a successor to outgoing head of state Michel Aoun despite an unprecedented financial crisis. Photo: Ibrahim Amro, AFP

On Tuesday, October 18, a dinner was to be held by the Swiss embassy and the Swiss NGO Center for Humanitarian Dialogue, but it has since been “postponed,” perhaps indefinitely.

The event was to include representatives from all of Lebanon’s major political parties, such as the Lebanese Forces (LF), the Free Patriotic Movement (FPM), the Progressive Socialist Party (PSP), and so-called forces for change (which is not a political party), the Amal movement, and, most controversially, Hezbollah.

Though the event did not seem particularly significant in hindsight, it was picked up by the media, leading to some controversy.

Besides the presence of Hezbollah, the other issue that circulated in the media was that the event was somehow an attempt to dismantle the Taif agreement, which was the agreement that essentially ended the Lebanese civil war.

The Taif agreement was a relatively straightforward deal in which all Lebanese militias would be disarmed (except for Hezbollah due to intervention by the Syrians), seats in parliament would be divided 50/50 between Muslims and Christians, and political power would be more decentralized.

It also indirectly led to a government that was essentially dominated by Rafic Hariri, Nabih Berri, and Walid Joumblatt, of course until Rafic Hariri’s assassination and Syria’s withdrawal from Lebanon.

The Saudi ambassador to Lebanon, Walid Bukhari, also weighed in on the event, indicating the kingdom’s displeasure with it and saying on Twitter that “the Taif agreement is a binding contract to strengthen the foundations of a pluralistic Lebanon. The alternative is not another pact but the disintegration of coexistence, the disappearance of the united nation and its replacement by entities that do not resemble the Lebanese message.”

Though the controversy of the event may have been overblown, it does raise a highly pertinent question: when is it appropriate for Hezbollah to be present when it comes to national dialogue?

Though the meeting seemed to be quite basic, the media attention it received focused on the presence of Hezbollah and the potential implications regarding the Taif agreement.

“I think all this was very exaggerated… It was not supposed to go in this direction, and all this media attention,” Aoun told NOW.

He explained that plenty of such meetings, or roundtables, as he put it, have taken place in recent years and included Hezbollah, with little to no controversy.

“We participated in several roundtables in the past, one of which was organized by [Humanitarian Dialogue] itself,” he explained.

“We welcome any initiative, but it was not supposed to be any official platform… it’s like you’re invited to a roundtable like we have every day, every week, we have roundtables organized here and there with experts, with civil society, around topics of the day,” he continued.

Aoun also indicated that, had the media not picked up the event, there would have been no controversy.

Regarding when it is appropriate to invite Hezbollah to such events, Aoun maintained that, because Hezbollah is a political party and has MPs in the Lebanese parliament, it should attend these sorts of meetings.

“It happened before, and it happened this time… and when you do roundtables for dialogues, usually you invite the parliamentary blocs, and Hezbollah is one of them, so why wouldn’t you invite it… It’s part of the parliament,” Aoun told NOW.

The media portrayed it as if it was some kind of a national dialogue preparation or something like that, once that happened Melhem Riachi pulled out. He said no, we are not entering into a national dialogue if that is going to be the case until we receive clarification from the embassy on the purpose, then we will see what to do.

However, Aoun did clarify that Hezbollah’s presence may sometimes depend on the context of the meeting.

Regarding the Taif agreement, Aoun stated that a Swiss NGO simply does not have the power to influence things to such an extent.

“After the media attention, and putting it as an initiative to amend Taif… this is why they attacked actually… How could an NGO be able to change something like Taif,” Aoun said.

Hasbani, who may be in a party that rivals Aoun’s party, largely agreed with Aoun’s assessment, but with some caveats.

“It was communicated in the media with a larger scale than it warranted in terms of the cause and the purpose. There was no agenda, no conference set up or anything, just a basic social dinner,” Hasbani explained.

“The media portrayed it as if it was some kind of a national dialogue preparation or something like that, once that happened Melhem Riachi pulled out. He said no, we are not entering into a national dialogue if that is going to be the case until we receive clarification from the embassy on the purpose, then we will see what to do,” he continued.

Hasbani explained that the LF was not opposed to the meeting until larger questions regarding its context were brought up. Simply put, the LF did not want to participate in a meeting when it was unsure of its agenda, especially when some called it a national dialogue that could challenge the Taif agreement.

Regarding Hezbollah, Hasbani explained that for parliament-related events, the Party of God was expected to be present, but for larger and more pressing events, certain pre-conditions would have to be met first.

“But when we talk about the imbalance of power and presence of Hezbollah and the non-level playing field, this turns it into a non-democracy. So to enter into any dialogue with them, it just needs to be on a level playing field, otherwise, it is not going to be a dialogue of equals, and it won’t be a fair dialogue,” he continued.

Essentially, Hasbani indicated that Hezbollah’s antagonism toward certain parties and the presence of its large arsenal make it impossible to negotiate with the group directly.

“We don’t go until they change the attitude toward the other parties and other groups in the country and respect the sovereignty of the state, and then we can have a dialogue if need be,” he explained.

Regarding Taif, Hasbani made clear that the LF supported the agreement and had no issue with the structure of the Lebanese government, but rather with political behavior.

“We are basically committed to the Lebanese constitution, that emanated from the Taif agreement, and we are among the toughest defenders of that, so there was definitely no intent or intention to be engaged in any dialogue that circumvents this, at this point in time, especially with Hezbollah,” Hasbani said.

So, the question of the Taif agreement was never really on the table to begin with, but that did not stop it from being one of the main points of controversy.

It seems that the event, which has been indefinitely postponed, will likely not happen, and in all honesty, the controversy it generated will likely be forgotten.

The Lebanese political theater is on to a new act already.