After three FPM parliament members proposed to split Beirut’s municipality into two, debate have risen as to how to manage the capital – and what its identity actually is. 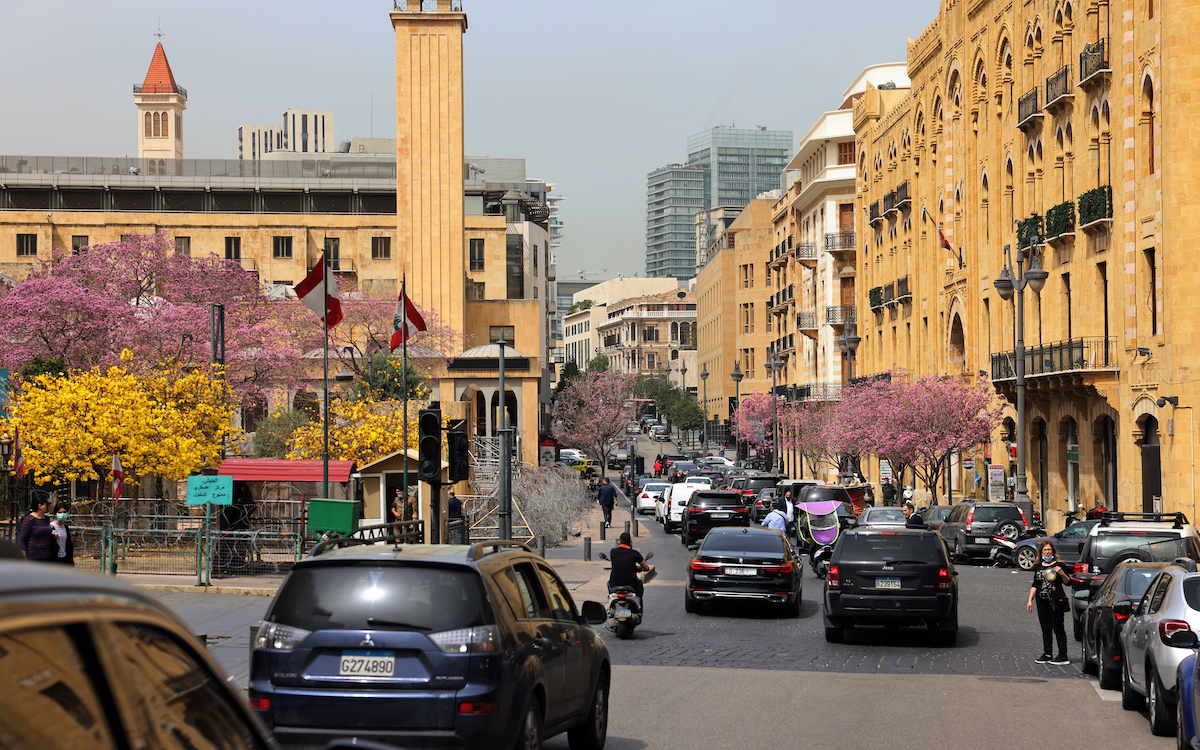 A picture shows traffic in the heart of Beirut on April 5, 2022, opposite the Lebanese capital's main Municipality Building. Photo: Joseph Eid, AFP

A small bombshell was dropped in Parliament last week, promising to reap ever more sectarian division and controversy.

The first, Beirut I, would include the neighborhoods of Ashrafieh, Rmeil, Medawar, Saifi and the port district (Marfaa), and would therefore be predominantly Christian.

Beirut II would be predominantly Sunni, since it would include the neighborhoods of Ain al-Mreisseh, Mina al-Hosn, Ras Beirut, Zokak al-Blat, Bachoura, Mazraa, downtown and Moussaitbeh.

According to bill 1156/2022, the two municipalities would hold monthly inter-municipal meetings to discuss common challenges. Each municipality would be responsible for its own treasury and tax collection, but a common fund and council would be set up to finance inter-municipal projects.

A return to the civil war?

This division vaguely follows the actual electoral district map (with the exception of the port district, which is now in Beirut II), but also the civil war’s infamous “green line” – a no-man’s land that was once dominated by snipers and heavy fighting between the Christian East and the pro-Palestinian Muslim West.

The division, reminiscent of the civil war, is a trigger to many, and has seen citizens cry out in denunciation of the proposed bill.

“The law takes us back to the times of the civil war – it even digs the divide even further, since the municipality wasn’t de facto split back then!” exclaims Charles al-Hayek, historian and heritage expert and creator of the “Heritage and Roots” Instagram page. For him, the law project only “hardens the confessional nerves,” as a Lebanese saying goes.

“It institutionalizes the split of the civil war and makes it into a law, which is a dangerous precedent for Lebanon as a whole country,” agreed Lina Tannir, a previous electoral candidate in Beirut II and political activist.

MP Nicolas Sehnaoui, one of the law’s conceptors, denied any form of sectarian division or return to the civil war times. During a press conference, he pointed out that the sectarian imbalance “exists today in the current municipality, and if the situation continues like this, the imbalance will increase, but the division into two municipalities inevitably protects the fair share” of Christian representation.

Looming behind the proposal is the fear of losing equal Christian representation in the next municipal council. Historically, the latter always respected parity between Muslim and Christian advisors. But many of the latter resigned after the 2020 Beirut port explosion, creating a void. Christian MPs have expressed their fear of seeing a municipal council controlled by a single religious group in the next local elections, which have been postponed to 2023.

“There are other ways to guarantee equal Christian representation without dividing the city and its people even more,” criticized Ibrahim Mneimneh, a newly elected MP linked to the 17 October uprising. He has garnered much support, but also criticism, after voicing his opposition to the bill on social media.

“The FPM has registered losses in the last local and parliamentary elections, so now they try to play the card of sectarian polarization,” he told NOW. Furthermore, he added that safeguarding quotas was not sufficient regarding the current state of the country. “We should move out of the sectarian logic towards a real and modern governance to save the city,” he said.

The issue of governance is at the heart of the problem. “The actual consensual model is hell in terms of effectiveness. All sects sit together and need to find compromises, which happens very rarely, it blocks everything,” MP Nicolas Sehnaoui told NOW.

Creating mono-sectarian councils would enable Beirut to go towards “real democracy, with a majority and an opposition which actually reports to the people,” he added.

There is a sense of urgency, as Beirut has been suffering from electricity and water shortages, adding to its infamous traffic and waste problems. On top of that, there is the trauma suffered by the city’s residents due to the Beirut port blast. An aid package of LL30 billion was approved by the city council, but the funds were never distributed and many felt abandoned.

You won’t ever resolve corruption and bad governance by dividing the city.

Sehnaoui confirmed to NOW that, in his law, the port would be included in Beirut I and pay taxes to its municipality. “The explosion has destroyed Beirut I districts, so it is normal that we benefit financially from its management,” he said, adding that there would not be enough economic revenue and activity in the proposed Beirut I district otherwise.

Yet, there has been no economic or social assessment of the law’s effects for now. “The Christian MPs of East Beirut might even lose at their own game, since many of the economic hubs are situated in the West,” Tannir said. And although Achrafieh is often considered as one of the richest districts of Beirut, it is surrounded by many marginalized areas, making the proposed bill’s socioeconomic effects on the most underprivileged Beirutis unclear.

“We all agree that there are many problems with the municipality’s governance,” Tannir said. “But the problem is not that Beirut’s municipality is large or small, nor that it is pluri-religious,” she added.

For her, the double layer of administration between the Beirut governorate and its municipality is “weird and unheard of anywhere else,” as elected council members can make decisions but not implement them, instead reporting to a government-appointed governor (mohafez).

“The proposal thus tackles the consequences of the problem, not its causes,” she added.

Civil society actors pointed out the endemic corruption at the heart of the capital’s politics. “Beirut is one of the richest cities in Lebanon, yet there are no public spaces and projects, all the money just disappears,” criticized Charles al-Hayek.

“You won’t ever resolve corruption and bad governance by dividing the city,” he stated. The real problem, for many, lies in bad governance and a lack of accountability at the heart of the sectarian, elitist state.

For him, the trajectory of Beirut’s governance has been a long and difficult process, which matched Lebanon’s troubled and complex history. “When Mount Lebanon was divided into two sub-provinces, one Druze and one Christian Qaymaqamat, the division fuelled hate and spiraled into the 1860 massacres,” al-Hayek said, underlining that “division doesn’t work.”

The Beirut municipality was established in 1864 to modernize administration during the Tanzimat period of the Ottoman Empire.

“It was one of the first municipalities established in the region, and already back then it had total parity. This guaranteed peace and communal governance,” he explains.

The civil war put an end to this era, as refugees were resettled into districts of their own sect, a huge blow to the pluri-religious and mixed city. “1975 marked the end of Beirut as a cultural hub of the Middle East,” al-Hayek said.

The activist and historian fears that dividing Beirut will set a precedent for other religiously diverse areas.

“I’m afraid that this absurd idea will echo elsewhere in these times of strong discord,” he said. The last parliamentary elections, for example, were dominated by the political rivalry between the Lebanese Forces and Hezbollah, especially after the Tayyouné incident in October 2021.

For al-Hayek, the FPM’s hidden argument is that “they are better off by themselves.” This underlying idea that “Christians are better at management and that the country’s state is due to Hezbollah and refugees” is absurd to him.

“We are basically at a junction: which Lebanon do we want,” Tannir asked. “Other areas will follow and retract to their own sect, thinking that they would manage everything better than the other and gain superiority.

The elites are losing credibility and want to hold on to their constituencies by trapping them into sectarian identities rather than creating a sense of citizenship.

This goes against the idea of Lebanon as a pluri-religious country and serves Hezbollah’s policy to divide and conquer,” she added. The FPM is Hezbollah’s main political ally ever since the Mar Mikhael accord between today’s president, Michel Aoun, and the party of God.

“We don’t support sectarian divisions – Beirut will remain one city with a unified council of 24 members, divided into two smaller councils but tackling common issues together,” he explained.

The project was discussed within the Strong Lebanon bloc “in a lively manner” and served no electoral gains, he assured. “If we had wanted that, we would have proposed the law before the parliamentary elections or in time for next year’s municipal elections.”

Despite all the polemics, the effect of the proposal might be limited. “It will never pass,” Meimneh said, adding that the independent bloc would “do everything to fight it.”

Furthermore, the proposed bill still needs to be sent to a parliamentary committee after review by the parliament’s speaker, Nabih Berri – who has voiced loud opposition to the notion. Even if it does arrive at a committee, “it will follow a long list of other laws which are pending review,” Sehanoui added.

“At least, the debate is on the table now,” he said.

But it remains unclear if fundamental issues such as wealth redistribution, gentrification, rising rents, empty apartments, and equality for inhabitants of slums and refugee camps will ever be addressed.

“This proposal deserves the interests of Beirutis in many ways,” criticized Mona Fawaz, professor in Urban Studies and Planning at the American University of Beirut and co-founded the Beirut Urban Lab.

For her, the most pressing issues would be resolved by broadening the scope of the municipality, not reducing it. “Garbage collection, water services, public transportation – all these need coordination among the greater Beirut area instead of setting up even more boundaries,” she said.

Other problems, like gentrification and real estate speculation, would not be affected by the law. 40% of Beirut apartments are empty and rents have increased in real value because of the economic crisis. “Instead of doing like every other city and taxing empty flats, we discount them! It’s absurd, we really need to fight speculation and appropriately tax the developers,” she added.

As many of the post-civil war politicians and parties make a profit out of the real estate, the main issue is a radical change in the system.

“The elites are losing credibility and want to hold on to their constituencies by trapping them into sectarian identities rather than creating a sense of citizenship,” she said.

For her, the law’s implicit return to the civil war division exemplifies this tactic. “We need to change the political class and put people who prioritize the citizens’ needs instead of cheap political calculations.”