Wars and uprisings were on social media probably a decade before Russia’s invasion of Ukraine and OSINT shaped conflict in Syria and Crimea, despite not being a mainstream way of getting information from the conflict zone, writes David Isaly. 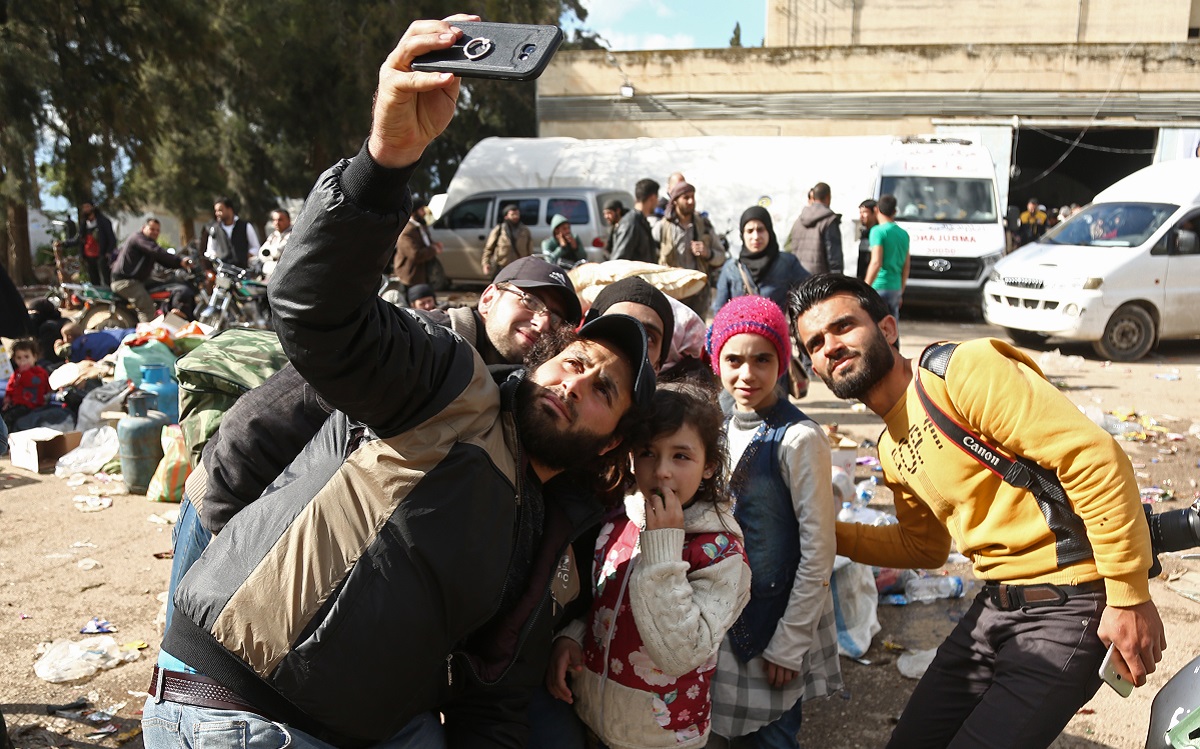 Syrian sisters, Noor (2nd-R) and Alaa (3rd-R), famous for broadcasting clips in English on social media about the regime-bombardments on the former rebel-held town of Jobar in Eastern Ghouta, pose for a photograph with refugees as they arrive in Qalaat al-Madiq some 45 kilometres northwest of the central city of Hama, after being evacuated from Arbin on March 30, 2018. Hundreds more Syrian rebels and civilians prepared Friday to leave Eastern Ghouta under a negotiated withdrawal, as Russia unilaterally announced a similar deal to empty the final pocket of the battered enclave. Photo: Zein al Rifai, AFP.

In the first days of Russia’s invasion of Ukraine, a volley of articles declaring that this invasion was the first “social media war” were published. One such article by Stephen Miller claims that “the Russian invasion of Ukraine is not only the largest European land conflict since the 1940s — it’s also the first for the TikTok and YouTube generation.”

Though I do not take much issue with the first part of this statement, the second part of the statement is flat-out wrong. One could maybe argue about the role that TikTok has played in the current conflict, but the recent invasion of Ukraine is surely not the first social media war.

Social media has been a common medium for news and information for the past 10 years, and in that time, there have been plenty of wars that fit the category of social media wars. Just because the open-source intelligence (OSINT) and conflict-tracking communities have become mainstream in the last few weeks does not mean they did not exist beforehand.

On the contrary, social media has been a crucial force in international politics for at least the past ten years.

The role that social media played in the Arab uprisings that broke out in 2010 and 2011 should not be understated. Though it did not start the mass protests movements that engulfed the Middle East, social media did fan the flames of revolution. In Syria, where revolution eventually transformed into civil war, social media quickly became a critical tool in disseminating information, as the government imposed a strict media blackout.

Unfortunately, the same platforms that were used to expose massacres and human rights abuses became outlets for propaganda and extremism.

When I was in high school, I distinctly remember the constant talk about the Islamic State’s media presence. Boys would discuss the grizzly details of IS execution videos during lunch breaks and how the group was taking over Iraq and Syria.

Indeed, IS’s mastering of social media played a crucial role in its recruitment efforts. The group was well funded and made astounding battlefield gains, which, of course, helped recruitment. However, what was likely equally important was the group’s incredibly savvy social media presence. Its propaganda was tailor-made to attract young men who were accustomed to the visual language of video games.

Though foreign fighters fought on all sides in the war, IS was the most successful in terms of media and recruitment, as it managed to attract thousands from across the globe.

In the early days of the war, the footage that came out of Syria was generally low-quality and mainly documented deaths, atrocities, and bombings. As the war grinded on, the footage’s quality greatly improved, as opposition groups had begun to set up media wings. The content of the footage slowly changed from documentation to propaganda. Rebel groups saw the utility of posting their footage on social media to attract fighters both within Syria and outside it.

Much of the footage currently coming out of the country is filmed by civilians, and is not necessarily made for propaganda purposes. The important comparison with Syria is the lop-sided nature of the footage being released.

A surprising driver of propaganda footage was the CIA’s requirements for using certain American weapons. Rebel groups were required to film their usage of TOW missiles, a powerful anti-tank weapon, to prove that they had not sold them. The selected groups that got their hands on TOW missiles quickly realized the propaganda value of these videos, and they became a hallmark of the footage that came out of Syria after 2014.

Due to the loose and decentralized nature of the rebels, TOW missiles quickly fell into the hands of extremists, who also filmed and released their usage of the weapon on social media channels.

In Ukraine, propaganda on social media has not taken on these characteristics. Much of the footage currently coming out of the country is filmed by civilians, and is not necessarily made for propaganda purposes. The important comparison with Syria is the lop-sided nature of the footage being released.

The higher volume of pro-rebel content greatly skewed outsiders’ perspectives of the war.

This same phenomenon is occurring now in Ukraine. Most of the footage being released is from the Ukrainian perspective, and there is little content from the opposing side. This may make one believe that Ukraine stands a better chance against Russian forces than it does in reality. Many on social media now believe that Ukraine will somehow be able to defeat Russia and win the war.

This is not necessarily the case.

Just like it seemed inevitable that the rebels would defeat the Syrian government in the first four years of the war, it may seem to some that Ukraine has a good shot of defeating Russia. Of course, nothing is set in stone, but it is crucial that those unaccustomed to following conflicts on social media understand the lop-sided nature of war footage.

From the periphery to the mainstream

The war in Syria generated a variety of online communities devoted to closely following the conflict and discussing it. One could even argue that the OSINT community really blossomed during the wars in Syria and Crimea.

Live Universal Awareness Map, commonly referred to as Live Maps, and Bellingcat, an investigative journalist group that uses OSINT, both began in the mid-2010s, as researchers and analysts realized that they could verify social media footage using satellite maps and other tools available online.

Live Maps was created in 2014 to track Russia’s first intervention in Ukraine, but quickly expanded to other parts of the globe, such as Syria. In the same year, Bellingcat was founded for similar purposes. The techniques established by both groups are now common methods for analyzing social media footage and have been largely incorporated into newsrooms across the world.

Additionally, there were a number of online communities that formed in those years to follow the wars in Syria and 2014 Crimea. The most mainstream communities have been the Syrian Civil War and Ukrainian Conflict subreddits, where experts and novices alike interact and discuss events in Syria and Ukraine.

The Combat Footage subreddit has also been a place for intense discussion, but it is not as tightly moderated as other forums.

In the more extreme category, 4chan, an image-based message board, was a popular place to discuss the war in Syria earlier in the conflict. The site is notorious for its lack of rules, and its user base tends to fall on the more extreme ends of the political spectrum.

There is even a story that 4chan users indirectly participated in the war in Syria. As the story goes, users of the site managed to geolocate rebel positions in southern Aleppo and allegedly send the coordinates to the Russian Ministry of Defense, which in turn targeted the geolocated positions.

For obvious reasons, it is difficult to verify whether the story is true, but it has become an internet legend nonetheless.

Indeed, when Russia recently invaded Ukraine, many OSINT Twitter accounts asked their followers not to share videos of Ukrainian positions, as Russian forces could use the footage to target them.

Russia’s invasion of Ukraine is simply not the first social media war. However, it is the first time that OSINT accounts have been one of the main ways that everyday viewers get their news about a conflict. OSINT and conflict tracking were crucial in Syria, even if they were not mainstream methods for acquiring information.

Now, for better or for worse, that seems to be changing.

David Isaly is a journalist with @NOW_leb. His work can be found on substack and tweets @DEyesalli.