A march of solidarity with Jerusalem 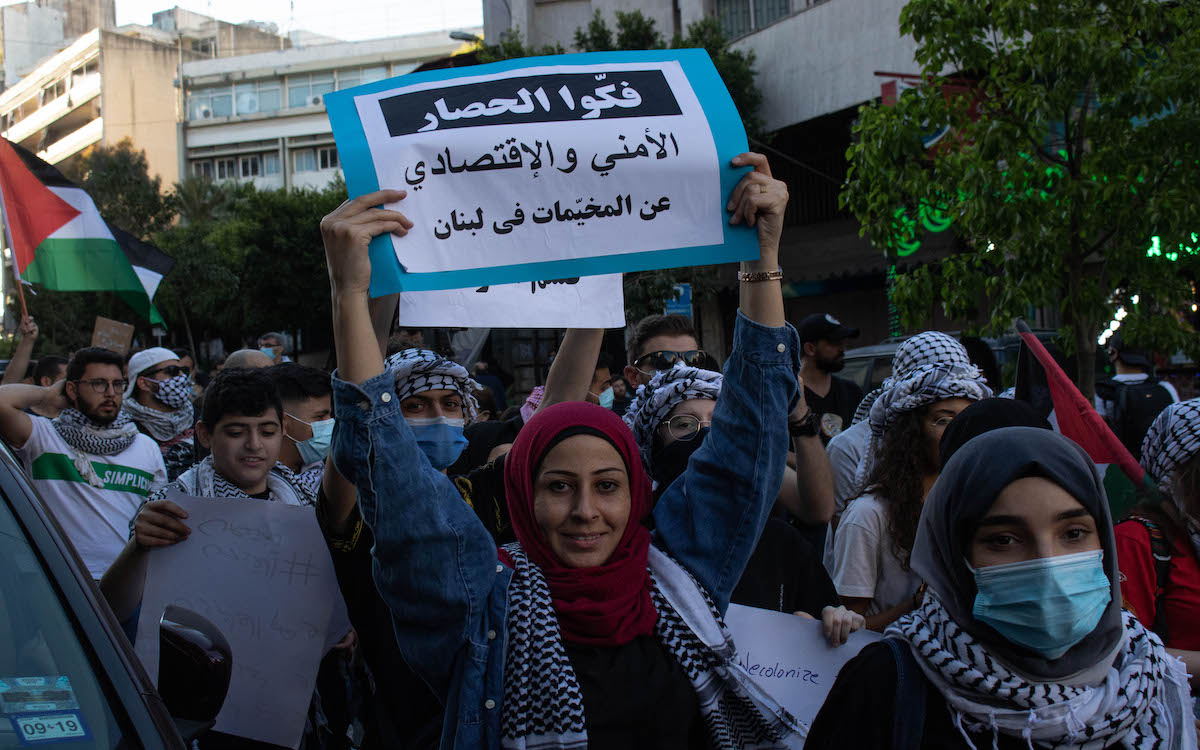 Protesters march towards Chatila refugee camp to stand in solidarity with the Palestinians in Jerusalem and Gaza. Photo: Nicholas Frakes, NOW.

The cramped streets of Beirut’s Chatila Palestinian refugee camp echoed with the chants of protesters that were slowly marching through its narrow alleyways, past the homes of Palestinian and Syrian refugees.

As the nearly 100 protesters walked past them with flags and signs in their hands, residents of the camp came out of their homes and shops and lined up along the side of the road like a city welcoming an army back from war. Some of the residents clapped and chanted along.

The protests were in response to the forced expulsion of families from their homes in the Sheikh Jarrah neighborhood in Jerusalem and the disproportionate use of violence by Israeli security forces on the resulting protests that have seen hundreds of Palestinians injured.

“It is tremendously important to me that people actually protest in solidarity with my people who are under attack in the Gaza Strip especially as I’m far from them,” Lina Abu Zubaida, a native Gazan studying in Lebanon, told NOW, “It somehow shortens the distance between us and makes us closer in the heart.”

The current conflict between the Palestinians and Israeli security forces started when the Israeli Supreme Court announced on May 6 that it would hear a case about evicting several Palestinian families in the Sheikh Jarrah neighborhood in Jerusalem from their homes in order to make room for Jewish settlers. Once the case was announced, protests broke out.

Violence escalated when Israeli security forces stormed the Al-Aqsa mosque. In response, worshipers fought back, throwing rocks at the soldiers.

This continued for several days until, finally, Hamas warned Israel that they have until 6 pm on May 10 to leave Al-Aqsa. After the deadline passed, Hamas fired missiles at Jerusalem and, later, Tel Aviv. The Israeli Defence Forces retaliated and Palestinian authorities reported that 53 people, including children, died in the Israeli strikes on Gaza and over 300 were injured.

Several Arab states as well as Turkey condemned the attacks.

As the current conflict continues to escalate, with Hamas in Gaza and Israel currently exchanging missile attacks, Palestinians and Lebanese alike have decided that they cannot remain silent over the forced evictions taking place in Jerusalem. Protestors also decried the brutality of the Israeli Defense Force’s response to the subsequent protests, which have erupted in towns and cities across the occupied territories, including Haifa, Nazareth, and Lydd.

While they acknowledge that they cannot go and fight, they firmly believe that by making their voices heard, the world is forced to listen to what is happening.

“I am feeling [guilt] every single day for being safe while my family is on the stakes in Gaza,” 21-year-old Abu Zubaida said.

“Joining these protests with people makes me feel like I’m actually doing something in support of my family rather than just standing in silence.”

For other Palestinians whose families were forced to leave during the many expulsions over 73 years of occupation, taking part in this march hit close to home.

Amira*, who spoke with NOW on the condition of anonymity, explained that her family was exiled from their home in Haifa in 1948 and is now part of the estimated over 475,000 Palestinians in Lebanon spread out over 12 camps throughout the country.

“Considering I’m a refugee, it’s very important for me to say something, to express what I’m feeling right now,” the 23-year-old resident of the Burj el-Barajneh refugee camp stated passionately. “Especially since you are watching your people and part of your people being kicked out of their houses and being left in the streets and being beaten.”

It was not just Palestinians taking part in the march; Lebanese and Kurds were present, decrying the injustices that they had seen.

Darakh Darwish, a 25-year-old Kurd, explained that she feels a close connection with the Palestinian people since the Kurds, despite being a large ethnic group with their own language and culture that spans through Turkey, Syria, Iraq and Iran, are also a stateless people.

“We both have stolen land. We both are oppressed. We are both dealing with ethnic cleansing,” she said. “We feel that oppressed people are really supporting other oppressed people.”

Seeing this solidarity amongst people is something that Abu Zubaida said helps make sense of what is happening and make the Palestinian people feel like they are not alone.

“[Protests] are very important in the sense that they make us believe in humanity. It’s the power of people standing in solidarity without being necessarily directly affected by the attacks on Gaza,” she said. “It makes us feel like we are being supported, it makes us feel like someone cares and that our lives are precious and matter rather than being numbers taken down.”

More than a number

Each flare-up between the Palestinians and Israel adds victims to a constantly growing list.

Abu Zubaida feels that it is important for the world to realize that the Palestinians killed in these conflicts are not just statistics in an enduring conflict, but human beings.

“People need to be aware that the cause of Palestine is humanitarian and only so,” she explained. “We are people who want to live, we love to live, we don’t appreciate killing or being killed. We deserve to live with dignity and with our basic human rights preserved and that’s the very least a human being deserves.”

Amira agreed with Abu Zubaida, adding that what is happening is a global issue.

“The Palestinian cause is not just for Palestinians,” Amira stated. “It’s for every human being who knows what is right and what is wrong.”

“We are going to use social media for our benefit,” she later added.

However, social media has seen an attack on pro-Palestinian posts, with reports of some being removed for violating their terms and conditions, promoting “hate speech”.

This censorship is something that Amira was extremely critical of, saying that it will not stop them from making their voices heard and making the world aware of what was happening.

“There’s a lot of social media platforms that are trying to hide the truth,” she said. “I want them all to see the truth that we are being exiled from Palestine. We’re not just leaving on our own. We are kicked out of our houses.”

Throughout the days since the escalation in the conflict, Abu Zubaida has had to watch as the place that she calls home is bombed, forcing her to check in with her friends and family to make sure that they are safe.

Despite seeing all of the suffering taking place in her home, witnessing a diverse, passionate crowd come out in support of Palestinians in Jerusalem and Gaza has helped Abu Zubaida.

“I believe that there are still good people in the world and that there is still hope in humanity and works as some sort of bandage to my wounded heart.”