A river ran through it

The Abu Ali River, once at the heart of Tripoli, was a major contributor to the economic and social life in Lebanon until it was blocked in 1958, to control the city. But historians and residents say that bringing it back would breathe new life into the neglected city. 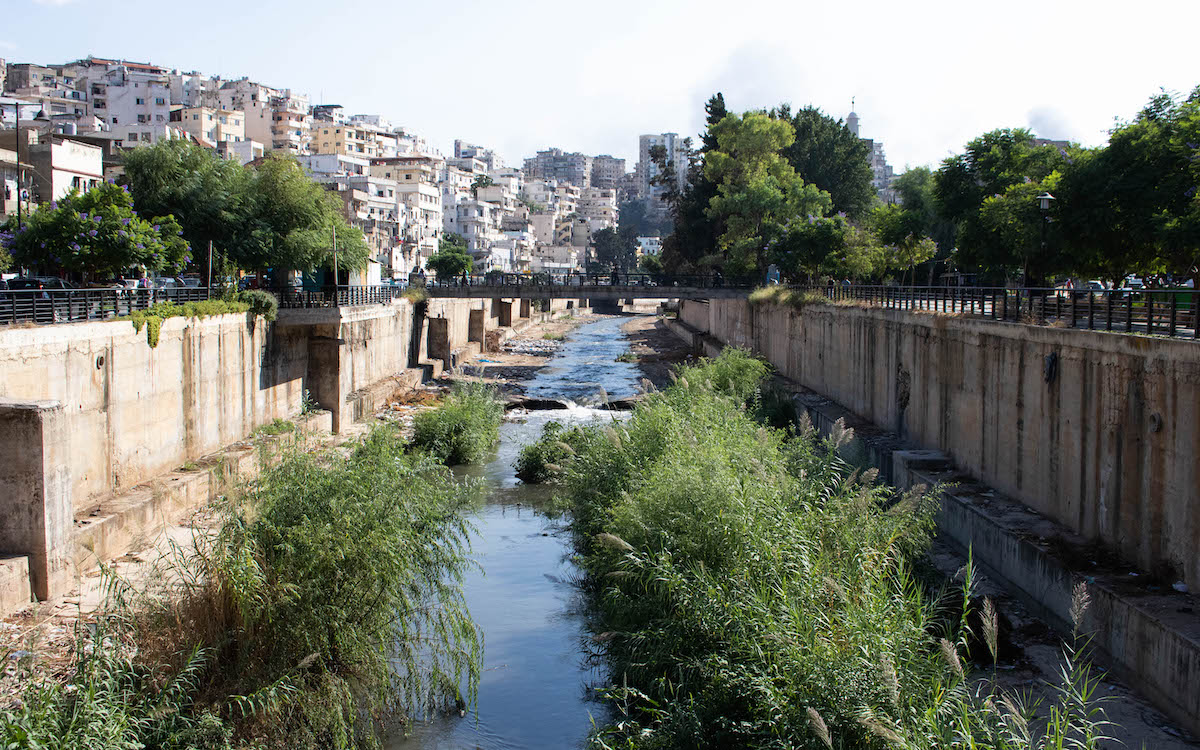 The Abu Ali River was once at the heart of Tripoli and the city’s economic and social life. Now it is a shadow of its former self, after it was blocked in 1958. Photo: Nicholas Frakes, NOW.

The intensity of the sun bore down on the shop owners in the souk al-baleh, the thrift shop market on the border of the Zahrieh and Tabbaneh neighborhoods in Tripoli, as they did their best to shade themselves from the brutal heat even at the end of September.

In the shade, they could not escape the dozens of bugs flying around and the foul stench that came from the river bed below them.

Piles of garbage covered the sides of the river, while waste remained caught on branches, rocking as the current nudged them.

Abu Ali River in Tripoli has looked like this for decades, a place left to rot.

The river, once the heart of the city,  was blocked off in the late 50s during a push to redesign and modernize Tripoli on the one hand, and, on the other hand, better control the neighborhoods in terms of security.

But thus, the river – which is in fact the Qadisha River that runs 45 kilometres east to west from the Qadisha grotto, halfway between Bsharreh and the Cedars of God, to the Mediterranean Sea through Tripoli – turned from a place of community to a place of separation and pestilence.

“Before 1958 [the river] wasn’t an element of separation in Tripoli. It was actually part of the city,” Charles al-Hayek, a historian and founder of Heritage and Roots, a social media page that explores the history and culture of Lebanon and the wider region, told NOW.

“Before 1958, this was a built area. There was an entire neighborhood over the river, under the river with houses on bridges like in Medieval London.”

The beating heart of Tripoli

The Abu Ali River was a staple of Tripoli’s history dating back to the ninth and tenth centuries, during the short period of time when the Fatimid Caliphate ruled the city.

According to al-Hayek, the legend says the river got its name when one of the city’s rulers, Abu Ali, was drowned in its waters after the Crusaders took Tripoli in 1110 following a 10-year siege.

After the Crusaders were forced out to Cyprus in 1289, the city was reconstructed by the Mamluk Sultanate more inland in an effort to counteract potential attacks from the sea.

As the centuries went by and the city gradually expanded, the river remained an integral part of Tripoli.

“This city was built in the small valley of the Abu Ali River,” al-Hayek explained. “So it started where Bab el-Tabbaneh is now with bridges with houses on them. You even had jamaa al-naher, the society of the river. The neighborhood, hay al-naher, with its own traditions that are linked to the river, eating fish, using the river for water mills, for your domestic usages.”

Despite flooding in the 1940s, the community along the river stood strong.

But all that changed in 1958, during Lebanon’s “mini civil war”, when Tripoli was one of the major areas of conflict.

It was the final year of Camille Chamoun’s presidency when political and religious tensions reached a boiling point and war broke out throughout the country. Chamoun’s refusal to join the newly-formed United Arab Republic had angered Sunni Muslims and Druze factions and violent protests ignited across Lebanese cities, including Tripoli.

During the war, Tripoli, a city with a majority of Sunni population that supported pan-Arabism and the UAR, was bombed by the Lebanese military.

“The Lebanese state back then was seeking to adopt approaches to control Tripoli and it considered that the cohesive old nucleus of the city with the narrow streets and the old buildings were actually a challenge for any army seeking to control the city because you couldn’t get tanks into the city,” the historian stated.

“You couldn’t easily send your troops to control the city because of the nature of the streets. So, the idea was to make it easier for troop circulation in the city and to dislocate and segment the city into separate quarters to make the issue of controlling it easier.”

In order to establish better control over the city, al-Hayek explained that the government during Chamoun’s mandate used “urbanism to control Tripoli” by constructing a new highway running through the city, constructing new roads that drastically reshaped Tripoli and made an artificial riverbed that effectively killed the river and the communities surrounding it.

“To do so they destroyed the river neighborhood. They killed the river because it didn’t have a riverbed anymore. It’s all concrete. And they created an element of separation where, before that, it was an element of a smooth transition from one part of the city to another.”

This new separation made the areas by the river poorer and potential hotbeds for extremism since they were now on the periphery of the city rather than at the center like they used to be.

While state’s control over Tripoli was reinstated, the river has remained in a state of neglect and decay since then.

“Up until now, the river has no proper plan,” al-Hayek stated. “The Lebanese government has no proper plan of how to manage the river. It is heavily polluted. Pollution not only from Tripoli but also from the villages around the Kadisha because the sewage system doesn’t exist there.”

Despite the lack of plans for the river, the same vendors that now use the areas around the river say that they would like to see the river flow like it once did, arguing that it would not only be better for their work but for the city as a whole.

Ahmad Chemmas opened his small shoe store six years ago on a public walkway directly above the river.

Throughout his time there, the 54-year-old has grown sadder and sadder seeing the once beautiful river grow increasingly neglected and polluted.

“Upriver, generally, you could swim up there in the river,” Chemmas told NOW. “The water was clean then. You could drink from [the river]. But now, it’s dirty. It’s full of sewage.”

Chemmas explained that the Tripoli municipality occasionally cleans the river, but this has done little to help it as the waste quickly builds up again.

“[The municipality] cleaned it. But the people continue to pollute it,” he said solemnly. “It returns to chaos. It costs, from what I’ve heard, $27 million to clean the river. But where is it?”

This lack of action by the municipality is not necessarily due to a lack of interest in actually doing something with the river, but a lack of authority to act, as any projects involving it falls under the Ministry of Public Works.

“Add to that corruption,” al-Hayek stated. “Add to that, for the regime, Tripoli serves a purpose. It is a city that is supposed to produce extremism. Everything that counters that narrative is unwelcome. Add to that official neglect. This is why there was only one plan.”

Dealing with the foul smells that come from the trash that builds up daily is not the only issue that those working alongside the river face.

Ali Qalas, 28, works at a fruit and vegetable cart on a bridge passing over the Abu Ali River from 8 AM until 10 PM. While the smells bother him, the flies and mosquitos that ravage his product and Qalas himself are the bigger challenges.

“There are so many mosquitos here,” Qalas told NOW. “In the evenings it is the worst. The mosquitoes come out even more then.”

For both Chemmas and Qalas, the idea of the river being cleaned and flowing like it did before 1958 would be an incredible change. Qalas criticized the lack of effort by either the municipality or central government.

“The problem is that, here, Tripoli is very neglected and it hits the city hard,” Chemmas agreed. “Places like Jbeil get twice the attention but Tripoli is neglected and no one cares. It’s all because of the zuama, political leaders, of Tripoli.”

There have been plans drawn up in the past to reconstruct the area and bring it back to its glory days, such as the Council of Development and Reconstruction in 2006, but nothing has come from these plans.

That has not stopped people like al-Hayek from dreaming about the potential for the area despite the long-term damage that has already been done.

“​​I think that first, the river should once again retrieve its status as an actual river,” al-Hayek said.

“They should at least remove the cement that is in the base of the riverbed. Allow the riverbed to reconstruct itself. Two, we’ll transform this empty space into a green corridor at the heart of the city. And this green corridor could be a very good connector between the different parts of the city. This could be a beautiful green corridor. I think that this is how it could be managed because the damage that has been done to the river and the natural environment there is irreversible.”

Even if the rehabilitation of the area forced the vendors to move, Chemmas says that that is something he and his colleagues would be more than happy to do if life was brought back to the river.

Rayanne Tawil contributed to this report.