As regional politics change at an accelerated rate, Captagon production remains constant and can only be managed via improving the political and economic situation in Syria and Lebanon. 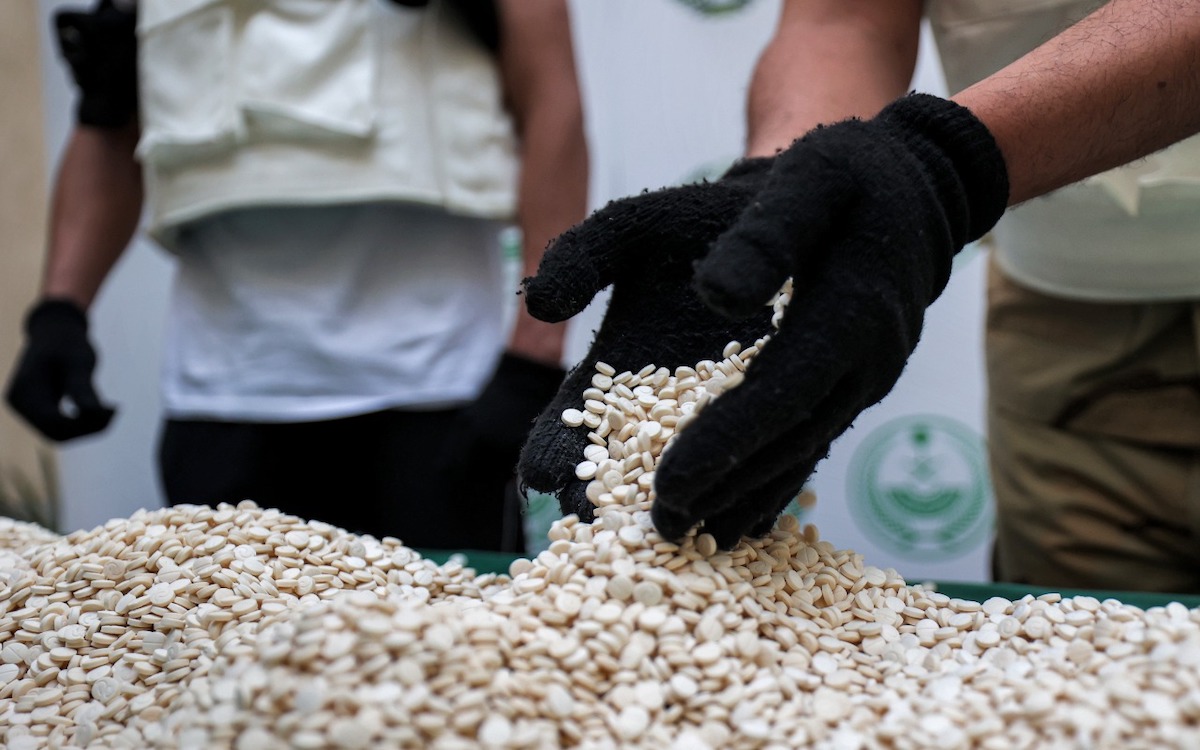 Officers of the Directorate of Narcotics Control of Saudi Arabia's Interior Ministry sort through tablets of captagon (Fenethylline) seized during a special operation and presented before AFP afterwards in the Red Sea coastal city of Jeddah on March 1, 2022. Captagon is an amphetamine-type stimulant manufactured mostly in Lebanon, although probably also in Iraq and Syria, and much of which is bound for Saudi Arabia. The Saudi anti-drug directorate's spokesman accused the "Hezbollah terrorist militia" of being "the main source smuggling them and manufacturing them," an accusation that Iran-aligned group denies. (Photo by Fayez Nureldine/AFP)

The Captagon trade, among other smuggling operations, has been a fixture of Middle Eastern geopolitical dynamics for the past few years. Since 2018, when the Syrian government took control of most of western Syria, and the Syrian and Lebanese economies collapsed, smuggled goods, especially illicit narcotics such as Captagon, have become some of the few viable means from which individuals, non-state actors, and governments alike can profit.

In particular, Iran and its proxy armies, specifically Hezbollah and Iran-backed units in the Syrian army, are regarded by many to be the primary producers and distributors of Captagon throughout the region. Using the same illegal border crossings that are used to smuggle subsidized goods into Syria, Hezbollah moves millions of Captagon pills into Lebanon for local distribution and for export through Lebanon’s seaports, mainly targeting Arab Gulf states.

NOW published an article back in February discussing the origins of the Captagon trade and what the Lebanese government can do to combat it. Since then, there have been a variety of dynamic changes regarding the trade, which have important ramifications for both Lebanon and the region as a whole.

Captagon smuggling has shifted away from Jordan and towards Iraq. Saudi Arabia and the rest of the Gulf states are slowly changing their approach to the trade, and Hezbollah’s association with the Captagon trade, at least in the Lebanese street, is growing.

Regardless of the upcoming Lebanese elections and changes in policy by powerful regional states, there is little doubt that the trade will continue.

In late January, Jordanian troops killed 27 smugglers on the Syrian border. The smugglers who were not killed managed to flee back to Syria. Since then, smuggling operations have shifted away from Jordan and to Iraq, as the Jordanian military has stepped up its efforts to curb the flow of Captagon and other illicit goods across its borders.

Caroline Rose, a senior analyst at Newlines Institute who researches the Captagon trade, told NOW that, “Iraq has been a country that has been greatly concerning for me… In the last two months, we’ve seen a major uptick, not only in Captagon seizures, and not only seizures along the Iraqi-Syrian border, but seizures that are very deep into Iraq, and even Baghdad.”

Iraq is very much becoming a concrete transit point for the Captagon trade. This isn’t just people with backpacks trying their luck with security forces throughout Iraq. They have established centers where they will store Captagon and wait for further distribution.

She continued that in late April, Iraqi security forces dismantled two criminal networks and discovered a warehouse in Baghdad related to the Captagon trade, seizing over six million pills.

Rose cited this as hard evidence that Captagon networks in Iraq have greatly expanded, as smugglers now have the capacity to establish large storage centers to facilitate shipping and local distribution.

“Iraq is very much becoming a concrete transit point for the Captagon trade. This isn’t just people with backpacks trying their luck with security forces throughout Iraq. They have established centers where they will store Captagon and wait for further distribution,” she said.

Importantly, Rose pointed out that these pills were not necessarily destined for the Gulf countries, which are a major market for the illicit trade. Rather, they could have been intended for local distribution within Iraq, as they were of poorer quality than what is usually shipped to the Gulf.

Indeed, she continued that rates of Captagon consumption and dependency in Iraq have been steadily growing.

Regarding how Captagon reaches Iraq, pills are generally transported across the Syrian-Iraqi border from a number of points, almost all of which are associated with Iranian-backed militias.

These militias are concentrated in Syria’s Deir ez-Zor governorate, primarily on the west bank of the Euphrates river. Al-Qa’im, an Iraqi town that lies on the border of Deir ez-Zor, is also known for Iranian activity, and this area has even been targeted by US airstrikes.

In northeast Syria, Iran has a presence in the city of Qamishli, which is near the Iraqi border and in the Kurdish-dominated al-Hasakah governorate. In mid-March, Kurdish security forces reported that they had captured over 2.5 million pills of Captagon in a warehouse in Qamishli, which they said were destined for Iraq.

Regional powers and the IMF

In recent months, there has been a thaw in the strained relationship between Lebanon and the Gulf states. Beginning this past fall, Saudi Arabia, along with other Gulf countries, cut ties with Lebanon, banning Lebanese imports and recalling their ambassadors.

However, their tone toward Lebanon has lightened, and it seems that they may try to reintegrate Lebanon into the Arab fold, but Rose was still hesitant to make this claim.

“I’m not necessarily sure if they’ve approached that point yet,” she told NOW.

Indeed, a warming of the Lebanese-Gulf relationship does not mean that the Gulf states are embracing Lebanon with open arms. Rather, it indicates that they may be realizing that cutting Lebanon off will not advance their goals.

“I think that the Saudis are recognizing, slowly but surely, that Captagon shipments and smugglers will certainly identify any type of method that they can to still ensure that Captagon is arriving at Saudi ports,” Rose said.

Banning Lebanese imports does not solve the problem, as smugglers will simply adapt and use different methods and transit routes to get their product into the market.

“I think that Saudi Arabia still sees this as an effective measure, even though it really hasn’t stemmed the Captagon trade… All that is going to do is encourage traffickers to identify new transit points… like Iraq,” she added.

IMF-backed reforms and aid could help alleviate the drivers of Captagon production and consumption in Lebanon, as the black market is propelled by economic downturn.

Lebanese security forces may have more capability to crack down on production labs along the Syrian-Lebanese border, but the labs, which are largely mobile, could always be moved into Syria, which has been done in the past.

Rose indicated that the financial institution is not necessarily focused on directly combatting the Captagon trade.

But, she added, anything that improves Lebanon’s economic or political situation could help disrupt the Captagon trade.

As the Captagon trade’s influence has grown throughout Lebanon and the rest of the region, Hezbollah has increasingly been associated with the trade.

“Captagon has started to become known as the substance that has been almost exclusively related to Hezbollah in Lebanon,” Rose told NOW.

Whether this will have much of an impact on the upcoming elections is unclear, but it certainly hurts Hezbollah’s popularity with those outside of its base of support.

In the event that Hezbollah were to lose some power and influence, either due to the upcoming elections or a possible nuclear deal with Iran, it would still not stop the Captagon trade, only slow it down. Lebanese security forces may have more capability to crack down on production labs along the Syrian-Lebanese border, but the labs, which are largely mobile, could always be moved into Syria, which has been done in the past.

Stronger border control could also possibly shift the black market toward other illicit trades, but this is unlikely given how lucrative Captagon is.

Overall, the May 15 elections will likely not have a major impact on the Captagon trade, at least in the short term.

There was also a report that Hezbollah fighters were being rotated out of Syria and returning to Lebanon to vote in the upcoming elections. However, reports like this are difficult to confirm, and outside of AlHadath, there has not been much reporting on it.

Hezbollah fighters do not necessarily need to pass through official border points to enter Lebanon, as the border with Syria is incredibly porous, making it hard to deduce if and how many fighters are crossing at any given time.

Regardless of any of these developments, the Captagon trade continues to boom as the Syrian and Lebanese economies smolder. The only thing that will truly put an end to black market smuggling is the rehabilitation of Syria and Lebanon’s political and economic situation.