With narcotics like Captagon continuing to flow across regional borders, there has been little done to address what regional states can do to effectively stem the flow of the illicit narcotic, analysts say. 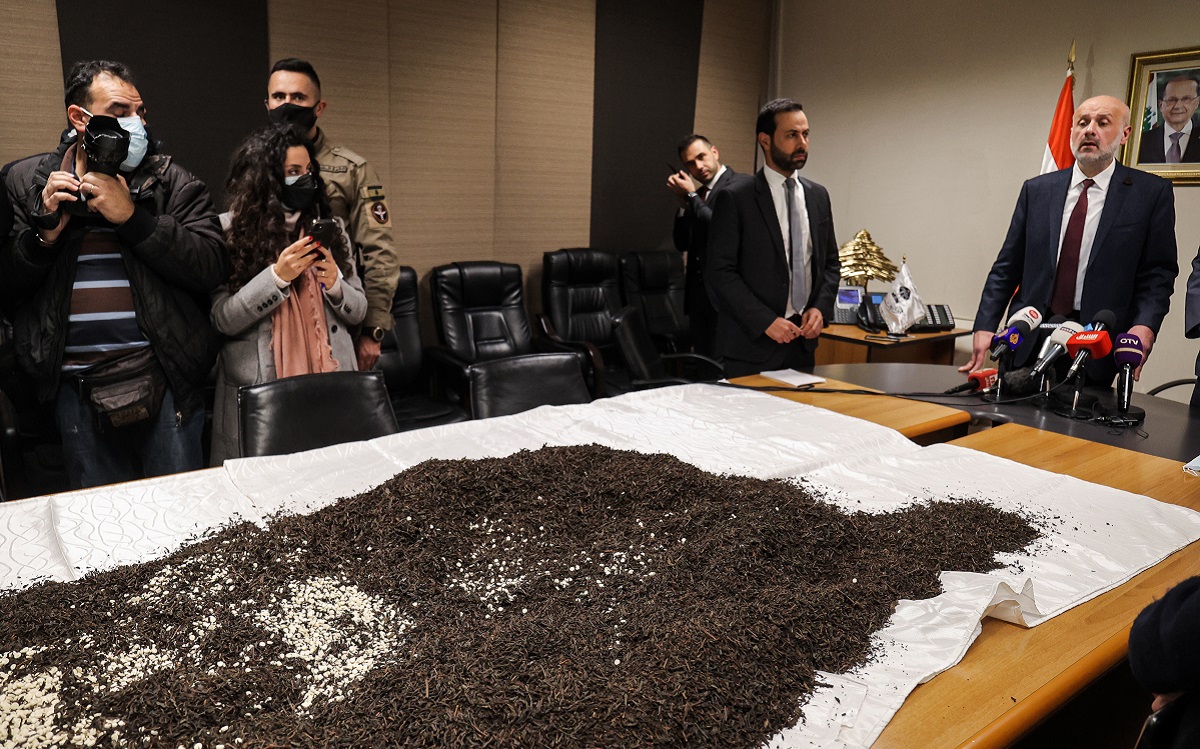 Lebanon's Interior Minister Bassam Mawlawi (R) gives a press conference about a seizure of a cache of captagon tablets, a codrug of amphetamine and theophylline, that was hidden in tea boxes to be smuggled, at the headquarters of the Internal Security Forces in Lebanon's capital Beirut on January 25, 2022. Photo: Anwar Amro, AFP.

On January 26, Lebanese authorities seized a large quantity of Captagon pills headed for Saudi Arabia. The pills, hidden inside more than 450 crates of tea, would have passed through Togo before reaching the Gulf. Though Saudi Arabia banned all Lebanese imports in late October 2021, this has not halted the flow of Captagon into the kingdom and the rest of the Gulf.

The name “Captagon” is derived from a brand-name medication developed in the early 1960s that was used to treat Attention Deficit Hyperactivity Disorder (ADHD). Though the name has stuck, it now refers to a cheaply and simply produced mix of amphetamines and other substances commonly found in the Middle East, but also seen in Europe.

Due to the clandestine nature of the drug trade, it is impossible to know when Captagon production began in Lebanon. Still, researchers have pointed to the mid-2000s as the beginning of the illicit trade. Indeed, in 2007, the United Nations Office on Drugs and Crime (UNODC) reported the first Captagon production lab in Lebanon. However, production did not fully take off until 2011, when the uprising broke out in neighboring Syria.

Within two years, the Syrian revolt evolved into a full-scale civil war, creating fertile ground for illicit activities. Smuggling networks between Syria and Lebanon existed for decades before the onset of war, but rebel groups quickly utilized those routes to move weapons and fighters across the border. To fund their activities, they began producing Captagon, smuggling it across Syria’s borders and into regional and global markets.

However, by 2018, the Syrian government and its allies had cleared the Lebanese border and regained control of most of western Syria. This fundamentally changed the dynamics of the trade, and since then, Captagon production has exploded. Now, authorities across the Middle East are struggling to stem the tide of this cheap narcotic, as it has flooded the region.

Though Jordan and Lebanon both share a large and porous border with Syria, Jordanian authorities have captured far larger quantities of Captagon in recent years.

Qalaat al-Mudiq, an analyst who focuses on Syria and tracks Captagon seizures on Twitter, tried to explain these differences. “Yes, Jordan captures way more [than Lebanon], even if they aren’t equipped with X-rays and dogs like Saudi Arabia,” he told NOW. “Captagon is surely produced in Lebanon,” thus making it easier to smuggle, “but in Jordan they have to cross the border.”

Al-Mudiq pointed out that Lebanon’s border with Syria is largely controlled by the 4th Armored Division of the Syrian Army and Hezbollah, which makes smuggling far easier. The 4th Division is led by Maher al-Assad, the brother of Syria’s embattled president, Bashar al-Assad, and has been linked to the drug trade. The division operates extensively on the Lebanese and Jordanian borders, as well as the coastal governorate of Latakia. It functions semi-independently from the rest of the Syrian army and is supported by Iran.

Al-Mudiq went on to say that the 4th Division tends to rely on local networks, especially in the Dara’a and al-Suwayda governorates, which border Jordan. Indeed, Jordanian authorities have reported witnessing smugglers stop at army checkpoints before making their way to the border.

Caroline Rose, a senior analyst at Newlines Institute who researches the Captagon trade, told NOW that “it is worth acknowledging that Lebanon does, of course, seize large industrial quantities of Captagon, typically at the port of Beirut and the Rafic Hariri airport, places where the security forces have a bit more autonomy and control. Whereas in Jordan, they are a lot more vigilant along their border, because they can be.”

She went on to point out that the Lebanese government does not have a strong grip on Lebanon’s border with Syria, as Hezbollah dominates the area, saying “Jordan doesn’t necessarily have that internal dynamic, and their border forces are able and empowered to seize as much Captagon as they can.”

Why has Captagon exploded in Syria and Lebanon?

By 2013, the Syrian government had lost control over large swathes of territory, and its territorial losses continued into 2015. Rebels took control of large stretches of the Lebanese and Jordanian borders, interdicting smuggling routes.

However, as al-Mudiq pointed out, this did not necessarily hamper Captagon production in government-held areas. Instead, the Syrian government’s eventual capture of these border areas and other rebel pockets enabled smuggling activities, making it far easier to move shipments across Syria and into neighboring countries.

Both Rose and al-Mudiq agreed that the primary driver of increased Captagon production was economic collapse. The devastation of the war and economic sanctions have made it very difficult for the Syrian government to create revenue, thus causing it to rely heavily on Captagon production. Economic collapse in Lebanon has only made matters worse, both incentivizing the trade and limiting the government’s ability to combat it.

So what can the Lebanese government do?

The Lebanese government does not have the capacity or political capital to secure the border areas with Syria. This reality is not likely to change any time soon.

Curbing the Captagon trade completely would require addressing the economic conditions that incentivize both political entities and individuals to rely on the trade, which will take years, if not longer. However, Rose and al-Mudiq pointed out some important things the government and foreign powers can do to at least manage the flow of Captagon out of Lebanon.

Though al-Mudiq was somewhat more pessimistic about Lebanon’s capacity to crack down on smuggling, both agreed that the government should increase seizures. Rose added that the focus should be on areas with lower political stakes, such as the Beirut port and the international airport.

The government should still work on cracking down on production sites in the Bekaa valley and border regions, if it is politically feasible, she pointed out.

“Things are looking up… the Gulf is recognizing that this won’t do much to stem the wave of Captagon shipments into their borders, ” Rose explained.

Indeed, cutting Lebanon off has not stopped the flow of Captagon into Saudi Arabia and the Gulf. It would be far more productive for the Gulf states to cooperate with Lebanese security forces and perhaps even provide detection equipment, such as the X-rays and trained dogs, al-Mudiq explained.

In addition to these recommendations, Rose stated that the Lebanese government should address the drivers of consumption and speak more vocally about Captagon’s adverse effects on individuals and their communities. This should include expanding access to rehabilitative care, framing Captagon consumption as a public health concern.

It is worth acknowledging that Lebanon does, of course, seize large industrial quantities of Captagon, typically at the port of Beirut and the Rafic Hariri airport, places where the security forces have a bit more autonomy and control. Whereas in Jordan, they are a lot more vigilant along their border, because they can be.

Of course, due to Lebanon’s current economic crisis, healthcare provisions have been greatly limited. However, these initiatives are still relatively practical, possibly saving money and requiring less resources for incarceration and drug enforcement on individual users.

This issue does not just affect the Middle East, and Western powers are starting to realize that they must take the region’s narcotics trade seriously. Regarding what the United States and European countries can do, Rose pointed to supplying testing equipment and labs, coordinating intelligence among regional governments, and providing resources for the healthcare sector.

Captagon’s chemical composition is constantly evolving, and authorities must keep up with these changes by regularly testing the Captagon they seize. Lebanon currently does not really have such capabilities, but with outside assistance, this could easily change with the establishment of a few testing sites.

Intelligence-sharing has already played a critical role in anti-narcotics operations, and expanding this cooperation under the supervision of the U.S. and Europe would greatly impact the quantity of Captagon that reaches the Gulf and other regions. Coordinating intelligence throughout the region would surely improve the Gulf states and Europe’s ability to crack down on the flow of Captagon. Interpol could also assist in such coordination.

Finally, as was previously stated, Lebanon’s healthcare system is in complete disarray due to the concurrent economic and fuel crises. Increased medical resources would markedly reduce the burden on the healthcare system and allow for an increase in rehabilitative care, which does not need the same degree of equipment and pharmaceuticals that more traditional healthcare modalities require.

Hopefully, with time, the material conditions that fuel the Captagon trade will subside, but for now, it is unfortunately here to stay as long as Lebanon and Syria suffer from economic disintegration. In the meantime, the problem can at least be managed through increased cooperation and provision of resources. Isolating Lebanon will only lead to further economic collapse and deprivation, intensifying the Captagon trade.