The newly appointed Lebanese cabinet that passed the confidence vote on Monday may have big plans in principle, but analysts argue that it will only be able to perform short-term stabilizing solutions leaving the big bulk of the job for a post-elections government. 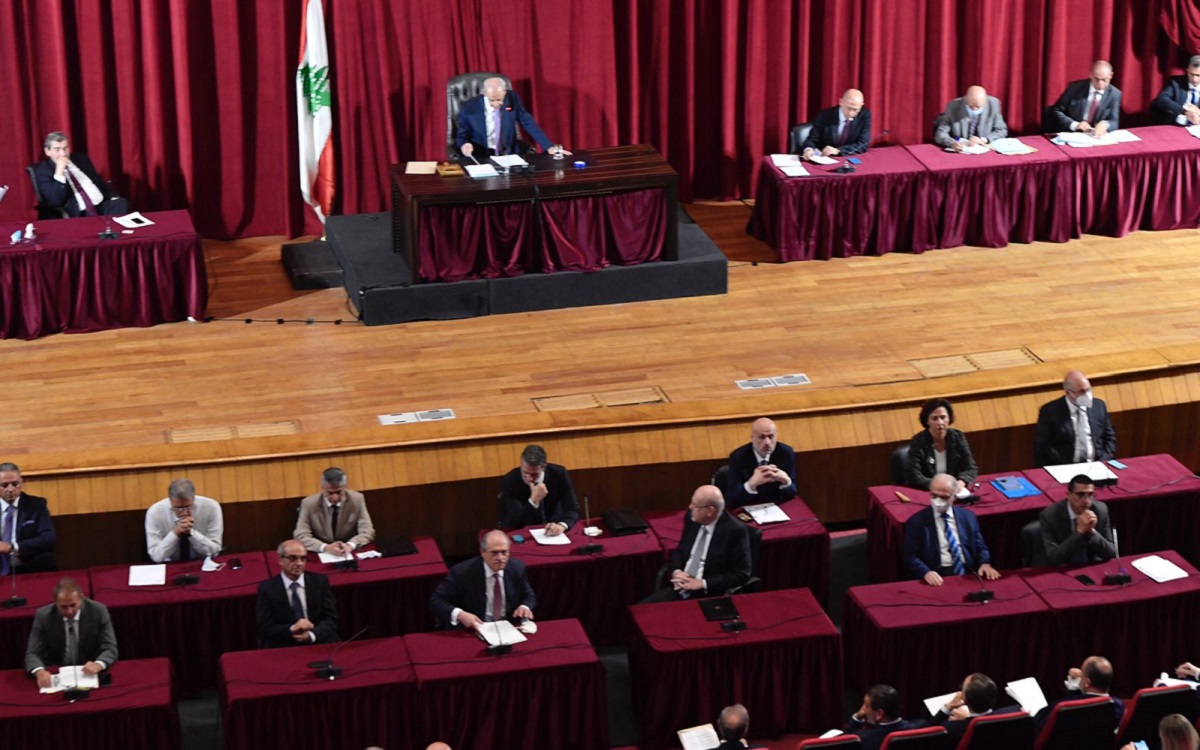 Lebanese MPs during the debate before the confidence vote on Monday, September 20. Photo: NNA.

Lebanese PM Najib Mikati was compelled to cut short the new cabinet policy statement to leave room for more debates. Fuel was scarce, the Parliament session had to wait for a Diesel tanker to be delivered to the UNESCO palace in Beirut that morning so that the MPs could actually sit and listen to Mikati’s list of government objectives.

“We promise to resume negotiations with the IMF [International Monetary Fund], work on completing the economic plan and commit to its implementation with the Central Bank, and strive to pass the capital control law,” Mikati said.

“We appreciate France’s initiative and we will commit to all its provisions in full transparency; we believe that it is necessary to listen to the opinions of young men and women, and we stress freedom of opinion and expression.”

Mikati also promised to reform the banking sector, correct salaries in the public sector, restart negotiations with creditors, address subsidies and many other issues.

He cut the speech short, at the request of the Parliament speaker Nabih Berri, and although the meeting lasted for 8 hours, to noone’s surprise, the new cabinet received its confidence vote, 78-15.

The response from the international community was quick and celebratory.

The European Union congratulated Lebanon on finally forming a government after a 13-month deadlock that saw two people attempt to form a government until Mikati ultimately succeeded.

“It is now time to begin the path to recovery with the credible implementation of urgent and essential reforms to address the needs and demands of the Lebanese people.”

The new Lebanese cabinet contains all these objectives on its list of priorities. But that is a lot to be achieved in little less than 9 months until the May 2022 parliamentary elections.  Mikati’s cabinet will likely only be able to stabilize the country and provide short-term solutions to Lebanon’s woes, Carnegie Middle East Center’s Michael Young told NOW.

“This government is in until spring. This is not a long-term prospect,” Young told NOW. “What Mikati has to do is focus on basically short-term stabilization of the situation.”

When Mikati read his government’s policy plan in parliament prior to the vote of confidence, much of what he said mentioned issues that need to be addressed to help Lebanon escape the worsening crises, but offered little in terms of substance as to how his government would tackle the various crises.

However, Young says that people should not read too much into it. Policy plans tend to be vague in nature and, when it comes to Lebanese politics, people are lucky if there are any specifics recounted at all.

“Government statements are usually about principles. It’s not that they give you a detailed, point-by-point breakdown of the plan,” he explained. “Let’s face it, Lebanon, anyway, is not a country in which governments are that precise in their program. At the best of times, they have general principles.”

Young added that beyond the new cabinet’s list of priorities, one needs to look closely at how incohesive this new government actually is, given the way it was formed.

“What Mikati has to do is focus on basically short-term stabilization of the situation.”
Michael Young, Carnegie Middle East Center

With the elections approaching in less than a year, the country’s political class is looking at how they might be able to persuade the Lebanese people to continue voting for them after the October 17 uprising, the port explosion, and the various ongoing crises that have plunged a majority of the country into poverty.

Given the political class’s refusal to enact large and sweeping reforms that would help the country in the long term, Mikati will have to focus on short-term solutions that would at least improve some aspects of life in the country, such as restarting the economy and addressing the fuel crisis.

“It’s not at all inconceivable that he can stabilize the situation. This is a minimum of what’s going to be expected from him. I don’t think that this is something over which the political actors disagree,” Young stated. “If his ambitions are in the short-term or are practical ambitions to just fix problems, you may not see divisions that one would expect normally.”

“I think it’s more the medium- and long-term objectives that are going to raise more questions among political actors,” he added.

This refusal to address the long-term issues is something that could potentially harm Lebanon according to Firas Maksad, director of strategic outreach at the Middle East Institute. The international community is looking for concrete change before going all-in with aid.

“I do think that the US and Europeans will continue to hold that line with the exception of new military assistance to state institutions, like the LAF and the ISF, and humanitarian assistance and some education aid too,” Maksad told NOW. “I don’t foresee that all that kind of reform is going to be accomplished before the elections.”

He explains that while Western countries, such as the US and France, have welcomed the new Mikati government, they are still not willing to offer monetary aid until Lebanon has met the demands of the international community, namely reforms.

Mikati is set to travel to France and meet President Emmanuel Macron in Paris on Friday to talk about the French initiative and reactivating the development aid conditions set by the CEDRE donor conference in 2018.

Elections on the mind

One point that Mikati has been insistent about since he was chosen to lead the government is that the 2022 elections will be held in an orderly and timely manner. He addressed civil society concerns that elections may be postponed to preserve stability, as they have been in the past. Lebanon did not hold parliamentary elections for 9 years,  between 2009 and 2018, with the parliament extending its mandate several times.

“We affirm our commitment to holding the parliamentary elections on time, as well as the municipal and optional elections,” Mikati told the parliament.

These elections, however, add to the politicians’ hesitancy to make unpopular decisions.

“Some of it has some significant public consequences and these politicians, after all, are running for elections,” Maksad explained. “I think deep structural reform, the kind that would meet the requirements of the international community, would probably have to wait until after elections.”

“Those are some serious issues that the Mikati government would have to contend with and deal with,” Maksad stated. “Subsidy reform obviously. We’re on our way to a de facto lifting of some of the fuel subsidies because the money is running out as the Prime Minister said.”

“I don’t foresee that all that kind of reform is going to be accomplished before the elections.”
Firas Maksad, Middle East Institute

But if Mikati is only going to be in power for less than a year, then he has no interest in making major policy decisions that could be reversed by his successor.

Rather than making deals with the IMF or making major changes, Mikati will rather focus on trying to stabilize the situation before the May elections so that nothing he does would be “shot down by the next government or the government after that,” Young says.

His focus will remain on more manageable issues – such as subsidies, fixing the health and education sectors and improving relations with other Arab nations – that can be more easily addressed during the next few months.

“I don’t see in the immediate term focus on banking,” Young explained. “Everyone is talking about an IMF deal but I don’t realistically see today that Mikati can come to any kind of deal with the IMF if he’s not going to be prime minister after the parliamentary elections next year.”