A show of sympathy

A complicated history and fears of escalation on the Lebanese-Israeli border after exchange of fire and a gunned down protester tone down Lebanese political stances on the violence in Gaza. 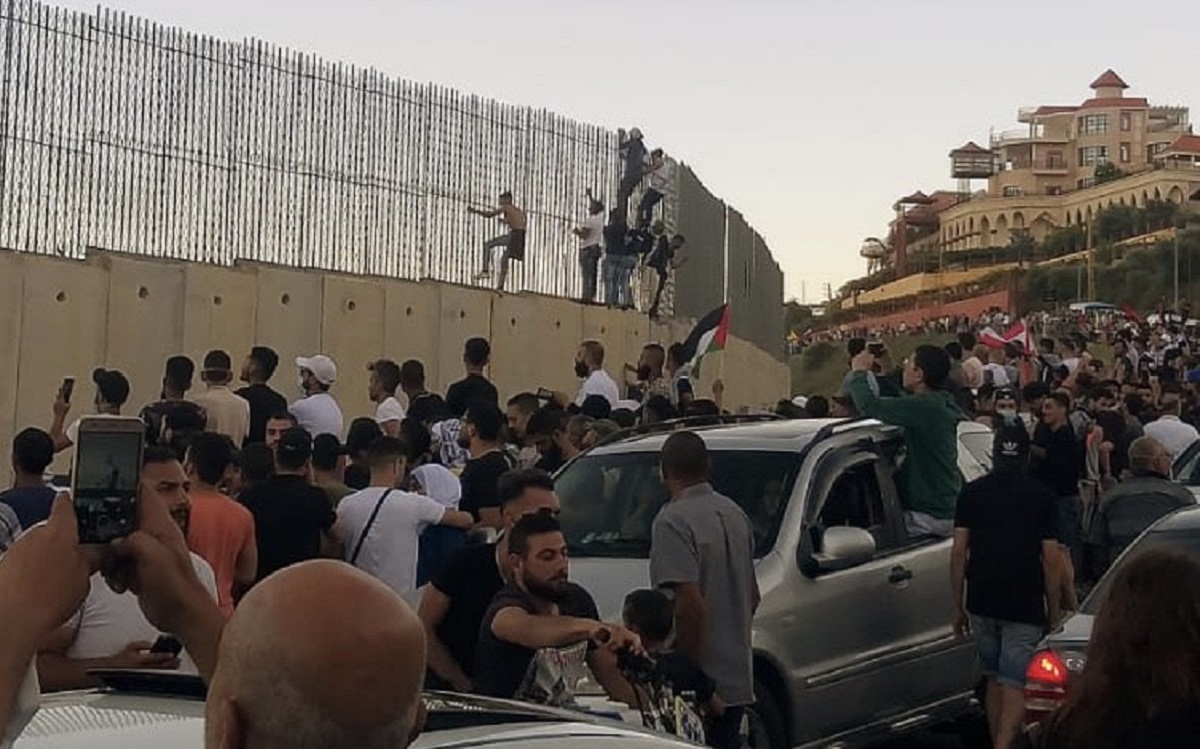 Protesters in Adaisseh, South Lebanon, On May 15, 2021. Photo: Courtesy of the National News Agency.

Demonstrators from across Lebanon traveled in convoy down to Adaisseh on the Lebanese-Israeli border on Saturday, May 15, to protest in solidarity with Palestinians under occupation, and against the continued deadly Israeli bombardment of Gaza, which have (at the time of writing) claimed the lives of more than 200 people, including 58 children.

They joined the thousands around the globe who defied lockdowns and curfews to stand shoulder to shoulder in their home cities, from Brussels to Cape Town, chanting in sympathy and bearing the flag of Palestine. 100,000 reportedly marched in London, and peaceful protestors were met with water cannons and tear gas in Paris, after defying a ban on the solidarity protests.

But in Adaisseh, the protest turned tragic. Mohammad Tahan, a 21-year-old man, was among a group of demonstrators who attempted to cross the border and enter the Israeli border town of Metula. The Israeli troops fired shots towards the group after they crossed over into Israeli territory. Tahan was shot and later died from the sustained wounds.

His death, however, did not trigger any strong official condemnation from Lebanese political actors, including Hezbollah itself, of which Tahan was a member, while statements on the violence in Gaza were deemed rather timid.

As the weeks of escalating violence continue over the border, many reactions in Lebanon, a country with the third highest population of Palestinians outside of the occupied territories, have been less about diplomacy and protesting against the human rights violations, and more about raised fears of escalation between Hezbollah and the Israeli Defence Forces.

On Monday night, six shells were fired from Lebanon towards Israel, but fell short of crossing the border. The Israeli army replied with 22 shells targeting the alleged launch location. It was the second incident in less than a week after last Thursday rockets launched from Lebanon’s Tyre landed in the Mediterranean Sea.

But as Hezbollah keeps quiet over Gaza and denies its involvement in the border incidents, analysts say escalation from the Lebanese side is highly unlikely.

Moreover, various politicians’ demonstrations of sympathy have not been followed by any drastic diplomatic movements at the top of Lebanese politics. Nor is there likely to be any action at the state level, according to Imad Salamey, Associate Professor of Political Science at the Lebanese American University.

“The last thing Lebanon wants to have is an open confrontation on its borders. The population is already under siege in an economic sense. Lebanon has no ability to sustain any serious confrontation with Israel,” Salamey told NOW.

Hezbollah was one of the most present political groups at the demonstration in Adaisseh over the weekend. Activists donning their yellow and green flags were some of the most visible and most vocal.

The ‘Party of God’ organized a funeral for Mohammad Kassem Tahan, the protester shot by Israeli Defence Forces (IDF) while trying to climb the border fence on Friday. The funeral was held on Sunday in Adloun, and Hezbollah flags were flown in his honor.

In a Hezbollah-controlled region of the southern Lebanese city of Sidon, the party organized a “chant bus” under the slogan “For Jerusalem” and toured the city streets. On Monday (17th) there were demonstrations in the Hezbollah controlled neighborhood of Haret Hreik.

At the official level, however, Hezbollah has so far remained quiet over the conflict between Hamas and the Israeli military. Its broadcaster Al Manar followed the bombings and had inside reports from Hamas brigades. The television channel also quoted the Iranian Foreign Ministry saying that “the Palestinian people have the right to defend themselves.” However, no official statement came from any Hezbollah high-ranking commander.

As the renewed violence entered its second week, other political factions were more vocal in condemning the violence in Gaza. Prime Minister designate Saad Hariri sent a group of Future Movement MPs to the southern town of Marwaheen on Sunday to stage a sit-in in solidarity with the Palestinians in Gaza.

“We condemn and denounce in the strongest terms the destruction, killing and brutal assault that our people in Gaza are exposed to, and we also condemn the new attempts to transfer our people in Palestine within the 48 borders and in Al-Quds Al-Sharif and Sheikh Jarrah neighborhood, and we call on the international community and the Security Council to oblige the Israeli enemy to immediately stop these practices,” Hariri said on behalf of the Future Movement.

The head of the Free Patriotic Movement, Lebanon’s largest Christian parliamentary party, MP Gebran Bassil, called Palestinian President Mahmoud Abbas and expressed his “full solidarity with the Palestinian people.” He also said that the renewed conflict would be “a stop on the road to the liberation of Palestine and the realization of the Palestinian state project with East Jerusalem as its capital.”

Walid Jumblatt, leader of the Progressive Socialist Party, tweeted an animated image of David and Goliath in solidarity with the Palestinians who he says are:

“Challenging and facing the Israeli blockade and aggression, and exposes the humiliating silence of the diaspora of Arab regimes.”

Salamey is convinced that Hezbollah’s actions on the border and in towns and cities are merely for show.

“Hezbollah is not in a position to open a fight against Israel either, that would risk undermining the Iranian and US negotiation in Geneva. Hezbollah would also not risk arming the Sunni Palestinian populations,” he pointed out.

As for the words of support from leaders, this is nothing new.

“The Palestinian cause is no longer as relevant as it used to be, now that the Middle East is broken down along sectarian lines. Many countries now fear Israel less, fear more Iran and Iran fears the Saudis more than Israel. The priorities in the region are no longer in favor of the Palestinians.”

Salamey also identifies what could be the main reason behind the lack of overwhelming solidarity for Palestine in Lebanon.

“Hamas doesn’t present the alternative for people around the world who would like to see an alternative to Israel. It is no longer the Palestinian Lliberation Organization, a liberation nationalist movement that many people can affiliate themselves with. Instead, they are just another exclusionary sectarian movement that undermines the cause of Palestine, and the fight to liberate Palestine.”

“We will continue to see many statements of solidarity, but that’s about it. At the end of the day, Palestinians will pay the price for it.”