Accountability is for everyone

A social media illusion may be driving Lebanese donor money to the corrupt and we need to keep asking questions and demand transparency in how the money is spent, writes Mariam Kesserwan. 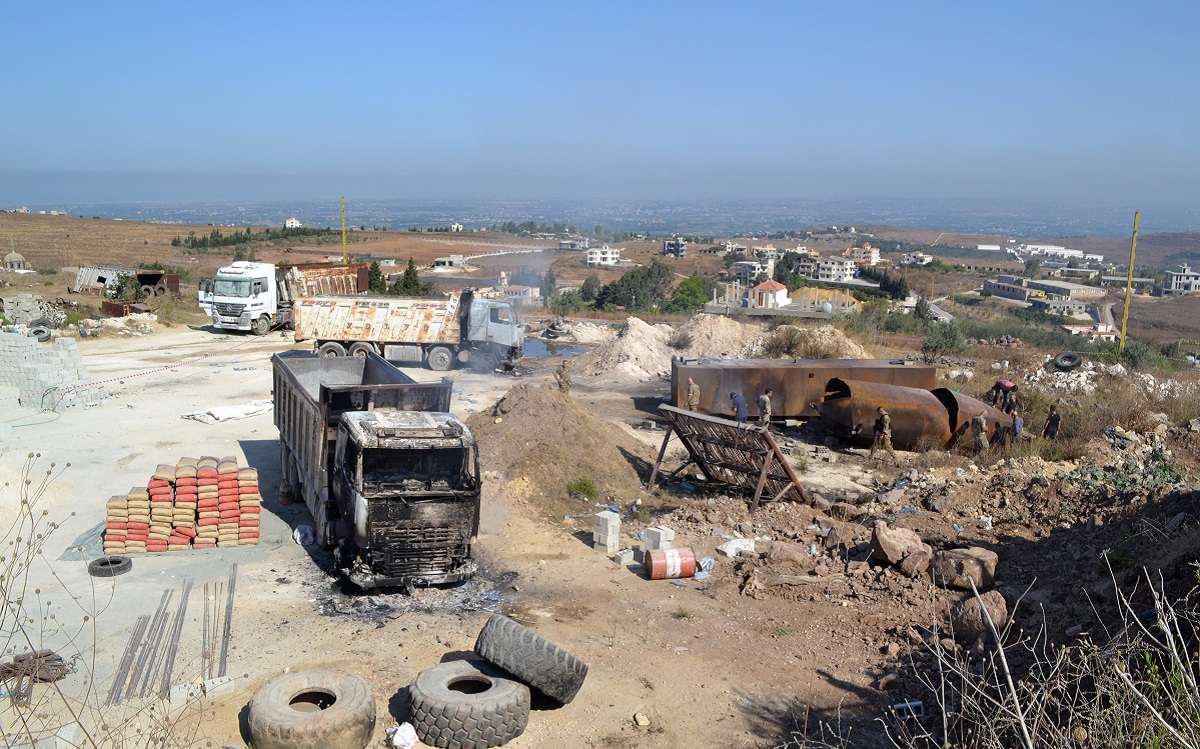 A picture taken on August 15, 2021, shows the site of a fuel tank explosion in the village of Tleil in Lebanon's northern region of Akkar where at least 20 people were killed and nearly 80 others injured when a fuel tank exploded. Baytna Baytak provided relief to the victims of the blast. Photo: Fathi al-Masri, AFP.

As the Lebanese people began their revolution in October 2019, they also garnered the support of the Lebanese diaspora. Lebanese all over the world donated funds to the Revolution, demonstrating their allegiance with the groups who took the streets to stand against corruption.

The amount of money sent from abroad for the purpose of funding and maintaining the movement during the first month was probably enormous. However, there’s no evidence to prove it happened, neither in performance nor on paper. We simply don’t know, as we have no access to information on who received what amount of money.

There seems to be two types of people on the ground: those who want nothing but to change the situation in the country, and those who see an opportunity to put their personal interests first. This is why those who were fighting hard in the streets and facing the brutality of the authorities during the first stretch were wary of those who joined the struggle by coming up with “initiatives” based on donations.

The process of citizens mobilizing for their country, which is heavily reported in the media and consequently rewarded by diaspora donations, wasn’t limited to the revolution. We’ve seen many cycles of mobilization in contemporary Lebanese history.

The most recent wave, however, given the Beirut blast and the shortages caused by the economic crisis, and the COVID-19 pandemic, has shifted donations from supporting political groups to relief efforts.

Much of the time, donors send funds to local NGOs, many self-proclaimed to have been ‘born from the womb of the revolution’, without knowing where their money eventually lands.  Taking into consideration that there are no laws compelling transparency from NGOs, donors most often remain in the dark when controversies over the integrity of these NGOs occur.

Baytna Baytak, an NGO that grew quickly to become a dominant force in the sector, was an initiative known for humanitarian work and rebuilding after the Beirut blast.

The NGO was established in the beginning of the COVID-19 pandemic to relocate nurses closer to the hospitals of their employment and to be able to isolate and not endanger their families. Plenty of support went to the initiative. It didn’t necessarily receive financial aid, but depended on local assistance to the frontliners fighting the pandemic – homeowners making their houses available to the nurses. The cause was immediate, worthy and no transparency was required in that phase.

After August 4, 2020, Baytna Baytak’s transformation was fast: funds were raised in the UK by Impact Lebanon and sent to Baytna Baytak for its projects to rebuild homes and businesses in Beirut.

But there are questions to be asked. They had no recruitment process for talents. The cofounders, board members and most of the contractors were part of Minteshreen’s political party.  The treasurer of Minteshreen was also the president of Baytna Baytak.

The projects and spending were communicated through emotional images, catchy slogans, numbers edited in a visual spread on social media, and links sent on the revolution whatsapp groups. But there were never any transparent reports, no known audits by professional firms.

In December 2020, voices began rising against the financial obscurity of the NGO, particularly considering that some of the members were obviously living in better conditions than others in the country. But we were faced with accusations of treachery, bullying and discreditation by the members and supporters.

I was unfortunately among the loudest of these voices calling for accountability. Unfortunately, I say, because of the pain I endured for simply asking questions and demanding transparency from an NGO. Many of those who attacked me for demanding answers were fellow October 17 activists. I was asked for proof that there is corruption happening. That is not the point.

I am not here to destroy someone’s reputation unfairly. We have never known real transparency in Lebanon.

Taking into consideration that there are no laws compelling transparency from NGOs, donors most often remain in the dark when controversies over the integrity of these NGOs occur.

We do not need proof for lack of transparency. Transparency either is or isn’t there, and as long as it’s absent and there are claims of misuse, questions must be asked. The Lebanese law for NGOs is outdated, it was established during the Ottoman rule and it doesn’t require any documentation on how funds are spent.  Therefore, as has happened many times in the past, an NGO in Lebanon can easily be a very convenient avenue for money laundering.

We all know that, donors also know it, NGOs themselves know it. But we wanted a new model, a transparent one. And this NGO got the sympathy and money of donors that were directed initially towards supporting revolution.

But then it happened. A few weeks ago, the board members of Beytna Baytak exposed the fact that Maroun Karam, the president of Baytna Baytak and ex-treasurer of Minteshreen, took funds from Bahaa Hariri.

Cherine El Zein, a co-founder and board member posted it on her profile, admitting financial mismanagement in Baytna Baytak, the unclear registration of the NGO, and the absence of financial reports. It was shameful to admit to wrongdoing for political reasons at this stage, instead of halting operations for ethical reasons. She reacted badly to our criticism, saying we had low IQ and were probably mentally deranged to demand transparency.

What is even more dangerous is that no real proof was made public to show that Maroun Karam was the one responsible for the mismanagement. Lea Ghorayyeb, the projects coordinator of Baytna Baytak, announced on her social media account that both herself and El Zein’s had resigned.

Noone ever explained what happened with numbers and audit reports.  Even in closing shop, they were not transparent. There are possibily millions of dollars at question here.

The need to keep asking questions

Despite becoming aware that they had been wrong to blindly trust the NGO, fellow activists were again blindly following the new imposed narrative that placed all the blame on Karam.

But we need to keep scrutinizing. There are many other NGOs, activists, and companies that were funded in the wake of the revolution and we need to know how they spend their money and who benefited from it.

Impact Lebanon, a charity in the UK, fundraised over 9 million dollars of donations for Lebanon and distributed them to 18 NGOs. There was no credible audit investigating how the funds were spent. The audit company that assessed Baytna Baytak found nothing wrong with the way they had spent their funds.

It is clear that they need to work  on their company’s methods of assessment.

Meghterbin Mejtemiin (United Diaspora) were the first to collaborate with Baytna Baytak when it was still only an initiative. The social media wave trumped their duty to investigate the progress of this initiative turning into an NGO. We also warned them about not only the lack of transparency on the part of Baytna Baytak, but we also reported that the only financial statement published on their website was removed, replaced and altered.

In the case of Lebanon, social accountability should be driving the performance of NGOs.

Unfortunately, they resumed collaboration with them on the solar power initiative which was meant to provide solar panels during the electricity crisis. Again, on social media, the results were published through a visual stating that Baytna Baytak provided 3 houses with solar panels. The post was also approved by likes and applause from United Diaspora who were leading this initiative. After the scandal was exposed, it turned out that only one anonymous house was given solar panels.  It is still unclear what happened to the rest of the money.

Fundahope, a crowdfunding campaign launched in November 2020, after the Beirut explosion, received the proof of registration of “Sallat Baytna Baytak El Insaniya” on December 29, 2020 although the NGO was among the first who got funding from the campaign.

Do not get me wrong, we, me and a few other activists, are not saying that all these groups are corrupt. Their problem lies in the missing criteria in the conditions and requirements of collaboration. We should never judge an NGO by the cause it’s working for. We should never rely on social media visuals and posts for numbers. At the end of the day, the blame falls not only on these companies, NGOs, and activists who do not report how they use their money, but also largely on the donors who don’t ask questions.

Donors were fooled by social media campaigns because it seemed unlikely that the law doesn’t protect donations from corruption or suspicious transactions such as money laundering. In the end, we all take the blame for not asking questions.

The first requirement is to ask for proof of registration for any NGO. The second is to request periodic transparency reports by well-known audit firms. Then they all should have a transparent procurement or recruitment procedure and a public list of suppliers. Even if the law in Lebanon allows and encourages a lack of transparency in any organization, donors should be responsible for knowing who they fund.

We all know the law in Lebanon imprisons people for ‘robbing’ their own deposit from the bank. The law, however, doesn’t hold anyone accountable for blocking access to people’s own money.

Unfortunately, there is no audit that can prove what is already gone. We have already seen many financial statements contradicting each other. We know the story too well from many other NGOs used before by the political elites, a system obscure to a point that you can’t know what happened: no bills, no reports, wasted funds, exaggeration in salaries, no proper administration.

In the case of Lebanon, social accountability should be driving the performance of NGOs. In other words, the NGOs that are transparent should be supported and encouraged and the ones that perform in darkness should be named and shamed. A lesson everyone should learn, don’t follow any narrative blindly, question everything, and build your own!