Eid al-Adha was once a time of celebration for Muslims around the world, but Lebanon’s economic crisis has drastically limited what many are able to do for the holiday as costs and poverty continue to rise. 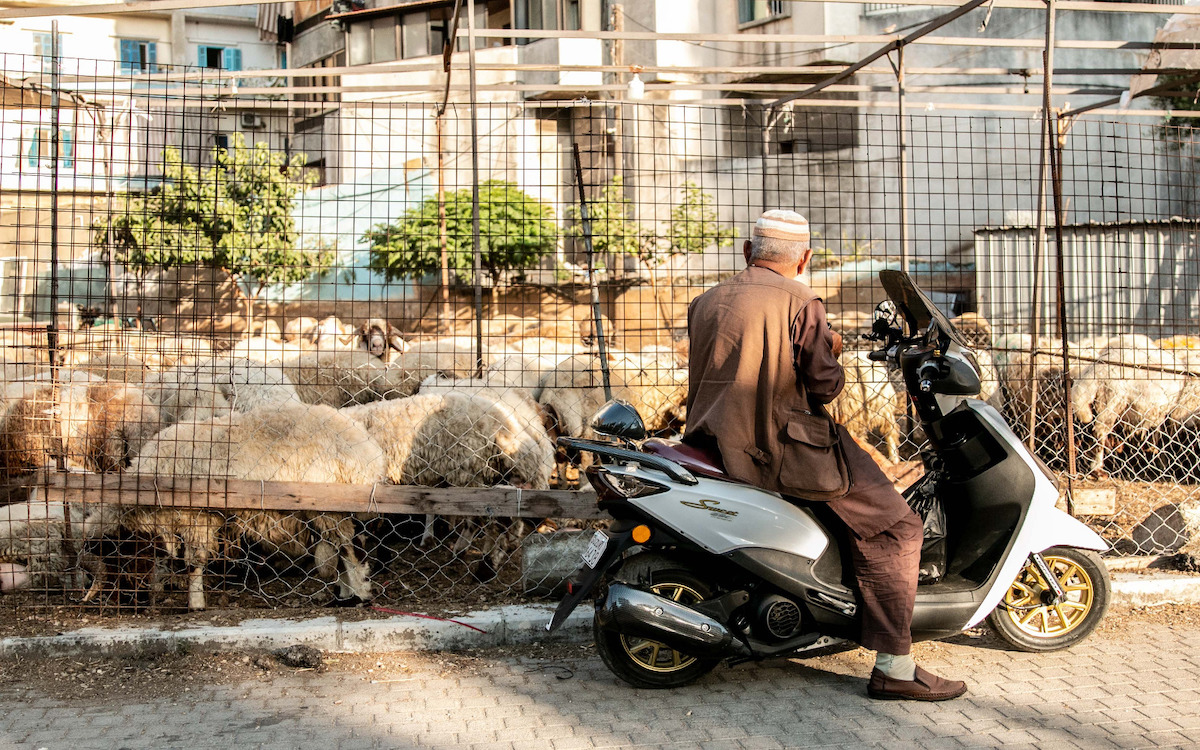 Fewer and fewer people in Lebanon are able to afford the costs to celebrate Eid al-Adha like they used to do prior to the economic crisis. Photo: Philippe Pernot, NOW

Tripoli’s streets bustle with life, scents and energy as Eid el-Adha is set to begin. After days of frantic shopping for clothes, gifts, and sweets, the morning prayer will kickstart the most important religious holiday in Islam.

Thousands of lambs will be slaughtered to remember the prophet Ibrahim’s willingness to sacrifice his son Ismail in allegiance to God. The enticing smell of grilled meat will accompany Tripolitans visiting their extended family and sharing the lamb’s meat, sweets and presents. In a city where the vast majority of the population is Sunni, Eid el-Adha is one of the year’s most significant events.

Yet, many of Tripoli’s inhabitants may not have the privilege to indulge fully in the feast. “Eid el-Adha is very special in my heart, but I can’t celebrate it,” said Ahmad Khayro el Abed, a 19-year-old Syrian living in Azmi. “This year, no one from my family can afford to give me money or presents,” he said.

His father is unemployed and suffers from partial deafness, as an infection in his ear keeps on growing towards his brain. The operation would cost up to 3,000 dollars, an unfathomable sum. “I make 100, 000 Lira a day and have to feed a whole family of eight”, el Abed said.

“Before the crisis, I went around the town to visit my friends, but this year I can’t afford that anymore.” Even boiling tea for his family and eventual guests has become impossible, since he wasn’t able to change his empty gas bottle – a new one would cost up to 700 000 Lira.

“Last year, I sat on the corner and watched the people shopping for clothes and being all happy. This time I’ll just stay inside,” he added, while sitting in his living room – an empty space with just a few mattresses.

Inequality in the plate

The traditional stuffed zucchini and beef dishes he used to enjoy for Eid seem like a far-away dream to him. Because of the crisis, his diet consists mainly of potatoes and bread. For Eid, he will have to “beg for a few pieces of lamb all across the city to provide for the family.”

Since one mutton costs between 300 and 500 dollars, most inhabitants of Tripoli will not be able to afford the sacrificial ritual. Usually, the well-off families distribute two-thirds of the lamb’s grilled meat to those in need.

But the generosity of well-off citizens doesn’t trump Ahmad’s feeling of utter abandonment. “The UNHCR barely helps us to pay rent, and an Italian NGO offered to cover a sixth of his dad’s operation,” he criticized. If it wasn’t for some neighbors, he would barely eat any vegetables and fruits.

Lebanon is one of the most economically unequal countries on Earth: 80 percent of the population now lives under the poverty line, and the most privileged one percent own two-thirds of the country’s wealth. Most of Lebanon’s billionaires are from Tripoli, yet it is known as the poorest city on the Mediterranean coast. Its large Syrian community is particularly severely hit, as Syrians are barred from working in all but three jobs and face extreme discrimination.

On the other hand, many of Tripoli’s restaurants and cafés are set to fill up during the Eid holiday. In some, a dish of stuffed zucchini with beef and stuffed grape leaves cost 240 000 LL and a platter of mixed meat can go up to one million Lira. This offers a sharp contrast to those who, like Ahmad, rely on the generosity of their neighbors for their meals.

A meat crisis within the crisis

Since the economic crisis began in 2019, meat has become a luxury good that many people can no longer afford. This will drastically affect Eid celebrations, according to Nabil Fahed, president of the supermarket syndicates and founder of Fahed brand. “Many people will have to ditch the traditional lamb and beef meals and either turn towards vegetables or chicken,” he said.

The Lira’s 90% devaluation curtails the capacity to import beef and lamb into Lebanon. One kilo of each now costs approximately from five to twelve dollars, against three dollars for chicken.

“The poultry is raised locally and stays more affordable, whereas beef and lamb are shipped over, mostly from Spain and Eastern Europe,” Fahed explained. The cattle are then slaughtered locally so that the profits mostly flow to small butcheries – helping them remain afloat amidst the crisis.

One kilo now costs five dollars, before it was three! The benzine and fodder got so expensive that I also could only bring half of my livestock.

The situation seems less hopeful for the supermarket sector, which has suffered from an 80% drop in sales’ real value over the past two years. This year’s Eid is not expected to make a difference, Fahed said. “There is always a small increase in the two days before Eid, but nothing noticeable, really.”

His pessimism was shared by the CEO of Tripoli’s Chamber of Commerce, Industry and Agriculture, Toufic Dabboussi. “People don’t have the purchasing power for buying new clothes and toys. There probably won’t be any economic boost happening this year,” he said.

Butchers, sheep farmers, and sweet shops are traditionally the great winners of the Eid festivities. But the crisis has severely reduced their income. “We went from 10,000 dollars to one thousand during the holidays,” said Abed Adeh Fayad.

He works for a cattle farm in Hama, Syria, and came to Tripoli to sell his livestock. In the enclosure set up on the main road in Zahrieh, 250 sheep await their tragic fate unknowingly. Potential buyers show up and enquire about the price, but most leave empty-handed.

“One kilo now costs five dollars, before it was three! The benzine and fodder got so expensive that I also could only bring half of my livestock,” Abed Fayad explained.

The same state of affairs preoccupies Jihad Harmosh, owner of the “King of Pastries” shop in Zehrieh. The bakery’s old walls go back to Ottoman times, and an atmosphere of decay pervades from the wood paintings. “I used to make 20,000 dollars over the weekend, now it’s only three thousand,” he explains.

The sales barely cover the costs of importing the nuts, pistachios, and dates required to bake the traditional maamoul. These pastries are particularly in demand at Eid el-Adha and Easter: 3 tons have been baked, awaiting their customers next to rows of buttery-sweet baklawas.

Fatima Hussein, 51, will serve similar pastries while visiting her husband’s family and her friends. She lives in Qibbe, Tripoli but will drive back to her village in Denniyeh, in the north, after the morning prayer. She has also cooked kibbeh meshawi, shish barak, cleaned the house, and gone shopping for groceries and clothes.

“Eid el Adha is a lot of fun and I’m very happy, but it’s also very tiring,” she said. In all religions and countries, family festivities reinforce the existing gender gap in household work.

Eid al Adha represents an entire week of work. Sure, the men work too: they are always outside to provide wages, buy the ingredients and presents. It is true that we work more.

More than three-quarters of the world’s unpaid care work is done by women and girls. They perform 12.5 billion hours of unpaid care work every day. In Lebanon, two-thirds of women do not participate in the labor market and Lebanese men earn on average 6.5% more than Lebanese women.

“Eid al Adha represents an entire week of work,” Hussein confirmed. “Sure, the men work too: they are always outside to provide wages, buy the ingredients and presents,” she nuanced, before adding that “it is true that we work more.”

Although social acceptance for gender equality has increased in Lebanon over the years, the crisis has enforced a return to traditional gender roles. “Women have been the first to be fired, to have quit their jobs, and to depend upon their families for their survival,” confirmed Sarah Kabbout, a Tripolitan feminist and activist.

Festivities in an afflicted city

Consequently, women from less privileged backgrounds suffer the brunt of the social crisis. Fatima Hussein lives in Qibbe, a district afflicted by grief. Last week, a building collapsed, killing the five-year-old Joumana Deeko months after the tragic death of 60 persons off the coast of Qalamoun in a shipwreck and the death of a one-year infant after having been refused by three hospitals.

The tragedies unfolding in Tripoli are exacerbated by the crisis, but deeply rooted in the state’s inequality. The fact that 15,000 buildings are under threat of collapse in the “Capital of the North” is testimony to the planned underdevelopment of some neighborhoods to the profit of others. And the recurring clashes between its inhabitants and the army exposed how Tripoli is being ruled as an external province, a dangerous periphery.

Eid el-Adha is a moment of peace, of gathering, and of sharing between families and friends. A moment of joy, which can bring some respite to an afflicted city and its pauperized inhabitants. The souks bustle with agitation, scents and lights. Azmi street’s shops boast their most beautiful vitrines. The city is filled with fragrances of grilled meat, with heaps of sweets at every corner, as passersby delight in its nocturnal life.

But even then, a simple look at who shares with whom, who can afford the lamb and who can only beg for it, who will cook and clean instead of sipping coffee and smoking argileh, shows the urgency of imagining a more equal feast.