HomePoliticsDossierAugust 4 2022: a march towards justice and a glimmer of hope restored
Dossier
Dana Hourany

August 4 2022: a march towards justice and a glimmer of hope restored

On the second anniversary of the Beirut port explosion, a march was organized to commemorate the victims that passed away and to relay a clear message to the international community: an international investigation is compulsory. 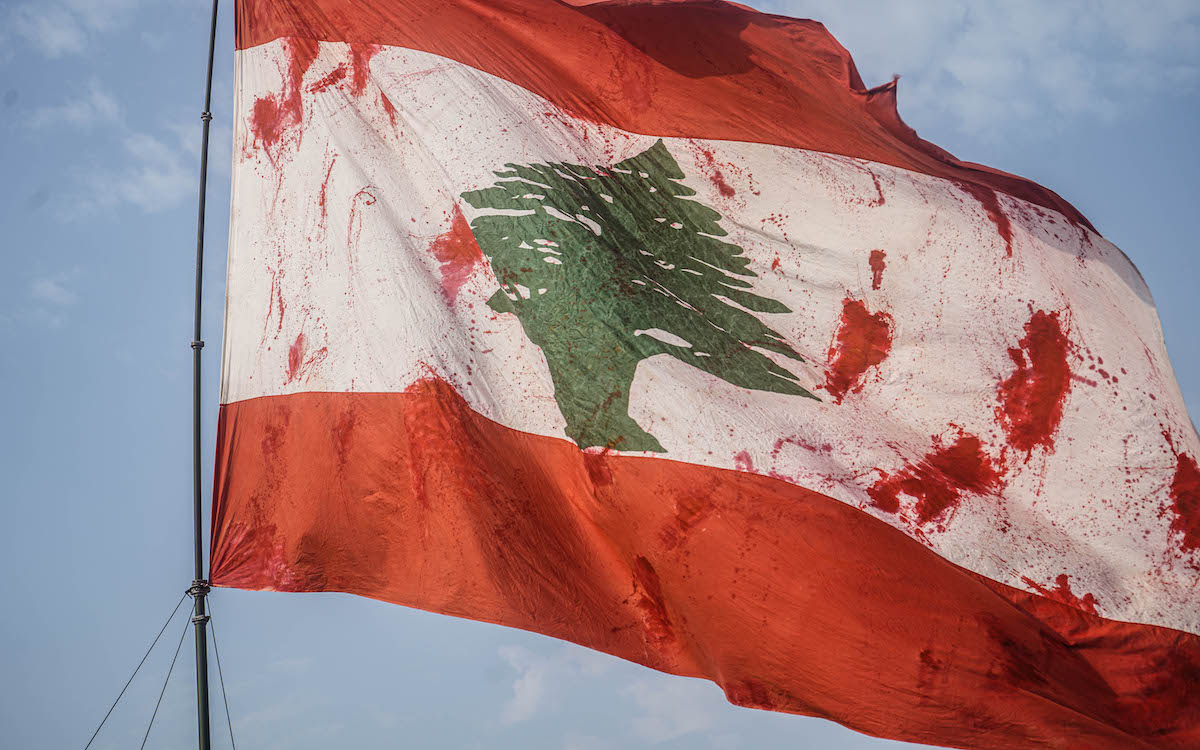 Protesters wave the Lebanese national flag with paint on it to symbolize the blood of those killed during a demonstration to commemorate the second anniversary of the August 4 Beirut port explosion. Photo: Dana Hourany, NOW

At three in the afternoon, people gathered in front of the Palace of Justice. The march commemorating the August 4 explosion, spearheaded by the victims’ families, had three stops.

Protestors covered themselves in red paint to pay tribute to the victims whose souls were lost to 2,750 tonnes of poorly stored ammonium nitrate.

Families held up photos of their lost loved ones as they always do on the fourth of every month. However, this time, the crowd was significantly larger.

Two years later and no one has been held accountable. Instead, the investigation has been crippled by Amal-affiliated Finance Minister, Youssef Khalil, who is refusing to sign a decree to appoint six chamber presidents to the Court of Cassation, which would make up the court’s plenary assembly. Two Amal-backed suspects, Ghazi Zeaiter and Ali Hassan Khalil have been re-elected in parliament and are part of the finance and budget committee.

After living through one of the world’s largest non-nuclear explosions, families, friends, and survivors are reminded that the 243 dead, 7000 injured, many disabled, businesses, and homes could not sway the authorities.

“They [the suspects] may hide behind their political immunities but we won’t stop demanding justice. Every day is August 4,” one protestor told NOW.

The march began, the sun was blazing, and people held up slogans with a clear message: the crime won’t pass and we will not forget.

The procession’s first stop was in front of the French Embassy where Aya Majzoub, a researcher with Human Rights Watch, gave a speech.

“In the past two years, we’ve written letters to the members of the Human rights council, organized press conferences, and met with several diplomats around the world. However, our demands were met with silence, indifference, and obfuscation,” Majzoub said.

“In our demand for an international probe, we’ve heard many excuses; the timing isn’t right or that it’s not a human rights issue… However foreign countries are hesitant to intervene without a greenlight from France due to what they deem as a ‘special bond’ between France and Lebanon,” she adds.

French President Emmanuel Macron landed in Beirut two days after the blast, parading around shattered neighborhoods and reassuring traumatized citizens that he was there to help them.

Besides donating a large sum of money — similarly to many other donors — the French president did nothing to advance the fight for justice.

Tracy Naggear, mother of the three-year-old victim Alexandra Naggear, said in a speech she read in French “Why is president Macron legitimizing a corrupt political class… We can only reproach the president for giving out promises that were not followed by actions.”

October 17 and the clashes with the riot police

While security factions such as the Lebanese Armed Forces and General Security walked adjacent to the march, some protestors belted out angrily “down with the Lebanese intelligence, we don’t exempt anyone!”

Reminiscent of the October 17 revolution, chants condemning the military, the authorities, and especially the Iran-backed Hezbollah party made a strong appearance during the march.

Arriving downtown, members of the families of the victims carried white caskets with “August 4” and “government” marked on them in red paint.

Men hoisted the caskets over their heads and walked towards the parliament building, which was blocked off by the riot police.

With loud tapping on the caskets coupled with derogatory chants at the police, protestors demanded to enter the parliament.

As people began jumping over the metal barriers separating the two, chaos ensued.

A second sound bomb was deployed, followed by another as caskets were thrown toward the riot police.

The victims’ families pleaded with the protestors not to participate in the chaos and to simply follow their peaceful march.

“There are outsiders who are causing trouble on purpose… We are begging you to stop,” a speaker from the victims’ families said.

Under the Annahar building Monika Borgmann, wife of the late activist and Hezbollah critic, Lokman Slim, who was assassinated on February 4, 2021,  gave a speech commemorating the assassinations of prominent public figures stressing that “the crimes are ongoing.”

“Lokman was the first to link the ammonium nitrate stuck at the Beirut port to the barrel bombs used by the Syrian regime …. Three weeks before his assassinations he publicly accused Hezbollah to be implicated,” she stated.

Then four towers of the grain silos collapsed.

An initial section of the silos collapsed on Sunday, and they continued to burn on the second anniversary of the explosion.

This did not, however, deter the crowd from the protest. Instead, everyone continued to march toward the final destination: the devastated Beirut Port.

As the father of the late army personnel George Maalouf walked with the crowd, he lamented the military inaction toward the loss of their comrades.

“He was one of you … it took us eleven days to find his body…” the grieving father said to military members.

“They [the politicians] are worth the sacrifice,” one person replied.

“Your son is worth more than all the politicians combined,” another asserted.

Every day is August 4

As toxic fumes rippled from the collapsing silos through the city, large crowds of people gathered in front of the site.

Words in French and Italian were read by speakers in an attempt to appeal to the International Community and citizens of Western countries in hopes of increasing foreign support to the families that felt abandoned by their people.

Protestors were then asked to sign a large Lebanese flag that will be sent abroad as a plea for foreign parties to investigate the blast as hopes for a fruitful local probe shrink.

At 6:07 pm, the exact timing of the blast in 2020, a minute of silence was given. Suddenly, a sound erupted from the speakers.

Mothers, holding the photos of their deceased sons, broke down in tears.

“Our eyes don’t sleep and they won’t until we get our justice,” the mother of Mohammad Alaa Dine told NOW.

Before leaving, families of the victims asked the crowd to swear an oath to keep pursuing justice for the Beirut blast, even after its memorial was over.

As the crowd chanted “Hezbollah is a terrorist!” William Noun, brother of the late firefighter Joe Noun, made a pledge to the protestors to support the families on a frequent basis and not only for one day a year.

“Riots, protests, revolutions, whatever you want we’ll do, but we won’t amount to any justice if we only show up on August 4,” Noun stated.

The crowd then dissipated as people walked back towards downtown.

Street-sellers sold water, balloons, flowers, coffee, and even ice cream, and all the while, the port was still ablaze, with one helicopter venturing to douse the flames.

People stood to observe the movie-like scene as the sun began to set on a city that has yet to know justice.

On a positive note, August 4 2022, marked the day injured mother Liliane Cheaito saw her toddler son for the first time since the blast occurred due to a custody dispute with her husband.