HomePoliticsBriefingBack to where we started
Briefing
Ana Maria Luca 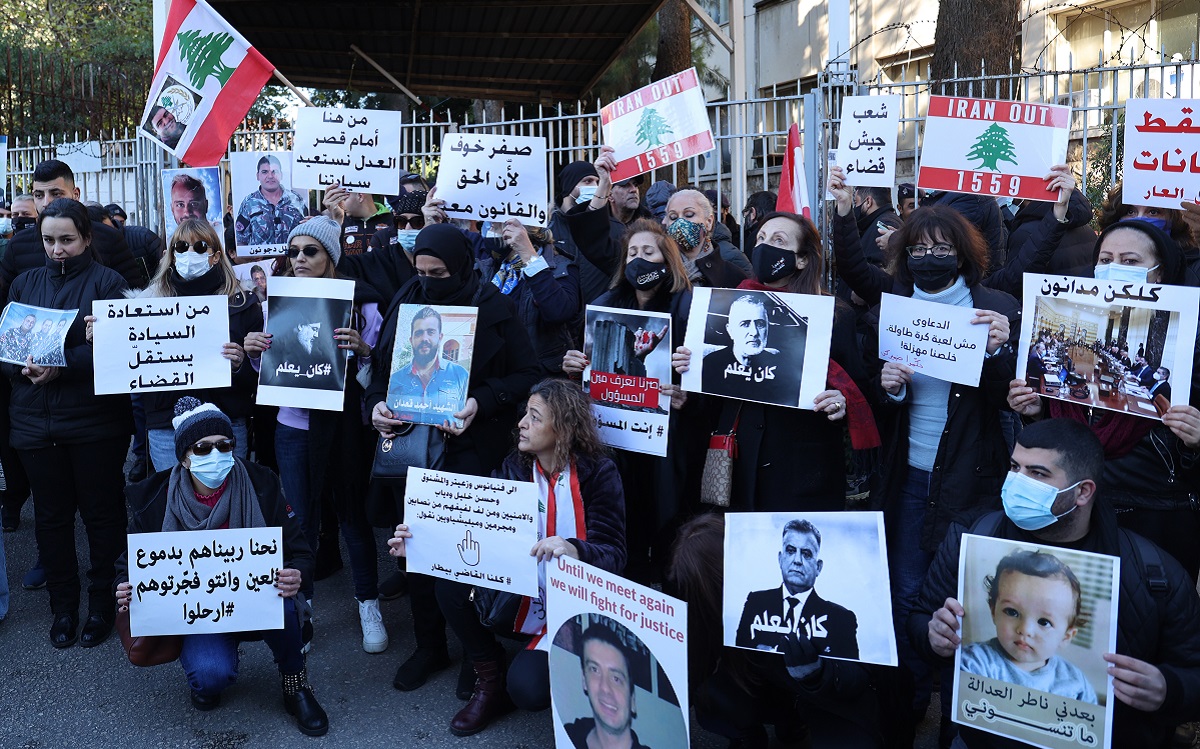 Activists and relatives of victims of the August 4, 2020 Beirut port explosion hold up placards, including portraits of the victims as well as of politicians they accuse of negligence, during a sit-in outside the Justice Palace, a government building affiliated with the judiciary, in the Lebanese capital on January 17, 2022. Photo: Anwar Amro, AFP.

Hezbollah and the Amal Movement said Saturday they were ready to return to government meetings.

There has been over three months of political deadlock that has exacerbated the country’s economic crisis.

“We announce our agreement to participate in cabinet meetings to approve the national budget and discuss the economic rescue plan and all that concerns improving the living conditions of the Lebanese,” the two Shiite movements said in a joint statement.

On October 12 Hezbollah and Amal decided to boycott the cabinet over the investigation into the catastrophic explosion at Beirut’s port in 2020. They wanted Judge Tarek Bitar removed, citing political interference by the United States into the probe.

Hezbollah and Amal said Saturday’s decision was a “response to the needs of the citizens”, citing “the collapse of the Lebanese pound’s exchange rate, the decline of the public sector” and crumbling incomes and purchasing power.

In fact, Lebanese politicians, the Shiite duo included, have been part of what human rights advocates and experts said last week was willful political neglect of the people’s suffering during the world’s most severe economic crisis in 150 years.

Parliamentary sources told Asharq al-Awsat that there was no pre-agreement on Bitar either; MPs were more hopeful that President Michel Aoun and Prime Minister Najib Mikati would act in some way.

Ici-Beyrouth’s Tylia el Helou explains that the pressure of the Shiite street was what made the two Shiite parties give up at least on one front and agreed to join the cabinet sessions, but only on decision-making relating to economic policies. It may be part of the answer.

A day of rage that wasn’t: Beirut was rather quiet on Thursday, as most institutions, including schools and banks, closed down for the day as the Public Transport Union had announced a day of rage when they threatened to close roads over soaring fuel prices. Drivers did block roads in the morning, but the strike was quite over by noon, as the LAF reopened main roads. The last areas to try to rebel were Hermel and some villages in South Lebanon, which are largely controlled by Hezbollah.

In Beirut, as worried as residents were, a trip through Dahiyeh towards the Beirut airport made it obvious that no one staged any strike or protest there. Streets were empty and quiet, taxi companies functioned and no roadblocks were hindering the traffic in the area.

BUT: The truth is that Hezbollah and Amal don’t need to block the cabinet to show their muscles, especially since the executive cannot interfere so openly with such a high-profile investigation that is scrutinized by pretty much everyone. Filing small lawsuits against Bitar galore seems to be more effective in blocking the probe.

Burned Nabih: In other news from the “Shiite street”, unknown individuals torched a picture of Parliament Speaker Nabih Berri at dawn on Wednesday in the southern town of Khiyam, state-run National News Agency reported.

NNA said the picture had been hung two days before in the town’s main square.

Burnt tires at the Justice Palace: On Monday morning the families of the Beirut port victims blocked the road and burned tires to demand the removal of the head of the Supreme Court and expressed support for Judge Bitar.

Dollar injection: After the Lebanese pound reached new record lows in the past weeks, the Lebanese central bank decided to use strategic reserves and infuse some foreign currency into the economy to bring the pound under control.

Banks collect cash pounds from their customers and sell them back to BDL for dollars in a bid to beef up the pound by reducing the quantity of local currency in circulation. Depositors can also withdraw their funds in cash dollars at Sayrafa’s rate, writes Omar Tamo for Forbes MENA. The move is not likely to last long.

Travel ban: Judge Ghada Aoun, who made headlines last year for refusing to step aside from investigating a case involving foreign currency transfers despite being officially removed by the General Prosecutor, has requested a travel ban for Central Bank Governor Riad Salameh.

Internet down: Lebanon’s telecom company OGERO has had difficulties in providing subscribers with Internet, as several of its stations are operating on batteries or are running out of fuel for generators. On Sunday, at 11.15, Internet went down in Corniche al Mazraa because an accountant at the Telecom Ministry did not sign a document allowing OGERO to buy fuel.

The electricity would be generated in Jordan via natural gas imports from Egypt. It would then be transferred to Syria and on to Lebanon. In addition, some amount of natural gas would be sent to Lebanon.

It is not yet clear when Lebanon will be able to import the electricity through the Syrian grid, as it needs serious repairs after over 10 years of war. However, the deal is set to provide an extra 6 hours of power to Lebanon.

Kafala, once again: A group of Kenyan domestic workers have been camping in front of their embassy for days, as they accuse their country’s diplomats of neglecting their complaints and their accounts of exploitation under the infamous Kafala/sponsorship system. Since the beginning of the economic crisis thousands of domestic workers, mostly foreigners, have left Lebanon because their employers couldn’t afford to pay them in foreign currency. Cases of abuse, as well as slavery, have spiked.

Sexual assault on minors: Two clerics were charged by a judge last week for assaulting minors in Koranic schools. The two cases come a month after a high-profile Maronite cleric was sentenced in France for rape and abuse of minors.

NOW’s Nicholas Frakes spoke a while ago to lawyers, victims and human rights defenders about child sexual abuse in Lebanon and how the justice system has little room for the cases.

???? The gladiator fighting (on the phone) for people’s rights “unaware” that be was being filmed.

Not even worth being considered for an Oscar due to the poor acting and plot. pic.twitter.com/3lNOlCq1jb

Oops: Prime Minister Najib Mikati inaugurated the Sheikh Mohamed Bin Zayed Emirati-Lebanese Hospital Center on Wednesday next to the Kuwaiti flag instead of the Emirati one. The protocol office explained it was “employee confusion”.

The Beirut Banyan was on a short vacation and will be back soon. Stay tuned.

This week we’ll keep an eye on how various Lebanese political factions are unveiling electoral lists and starting to campaign for May 2022.